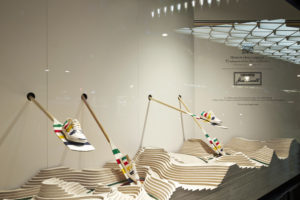 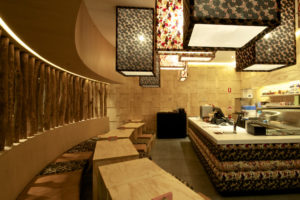 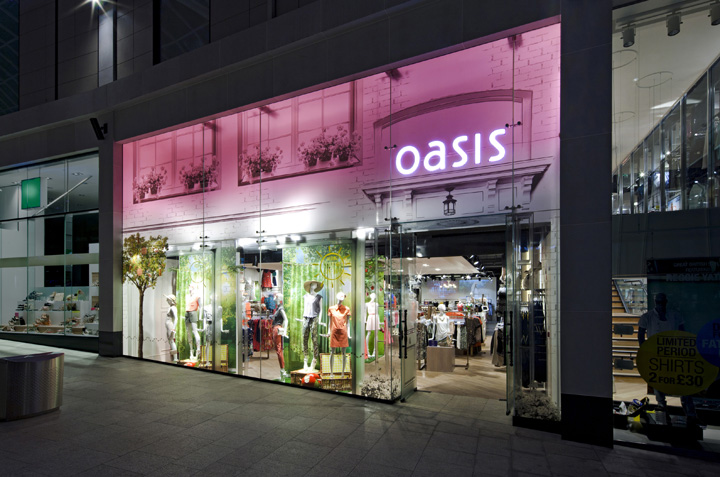 The new Leeds store takes the ‘House of Oasis’ concept that we designed and first implemented at Argyll Street, London, in October 2011, and revamps it for 2013. When considering retail for the international market, seasonal visual merchandising and propping inevitably play a much smaller role. Oasis is a brand set on rapid international expansion. We developed a brief with Oasis to create a store where the permanent architecture, rather than the VM, does the talking. With the international market in mind, a major consideration when developing the concept was ensuring ease of installation, short programmes and efficient detailing. Less emphasis is placed on the architectural box. The walls and ceiling were constructed away from the structural shell giving a fun stage-set feel whilst allowing elements to become standardised with less site-specific variables. One example of this is the wire frame ceiling structure to the rear of the store, which has been designed for manufacture off-site and takes a matter of minutes to assemble when in store. The quirky design negates the need for a traditional plasterboard ceiling by lowering the eye away from the exposed ductwork and cable trays and maintains the aesthetic of a Georgian house executed in a contemporary manner. The eye-catching and unique shopfront design embodies the essence of the scheme. The shopfront is owned by a photographic illustration of a Georgian house, which represents the ‘House of Oasis’ concept. The illustration takes the traditional elements of a house and adds a twist with the addition of a fuchsia pink gradient washing down the glazing to create a fresh and modern façade. Emphasis has still been placed on generous fitting rooms, with a large entrance allowing customer interaction between purchasing and browsing. Traditional Georgian paneling has been given an Oasis twist, with fuchsia pink lampshade illustrations and a painted light beam that washes across the paneling. This illustration style has been used throughout the store to offer the Oasis customer something unexpected; a window scene looking out over gardens features an inquisitive cat, while, tucked amongst the merchandise, an illustrated grandfather clock has a working face. While emphasis has been placed on creating a scheme suitable for international roll-out, detail and the Oasis personality that have been retained. 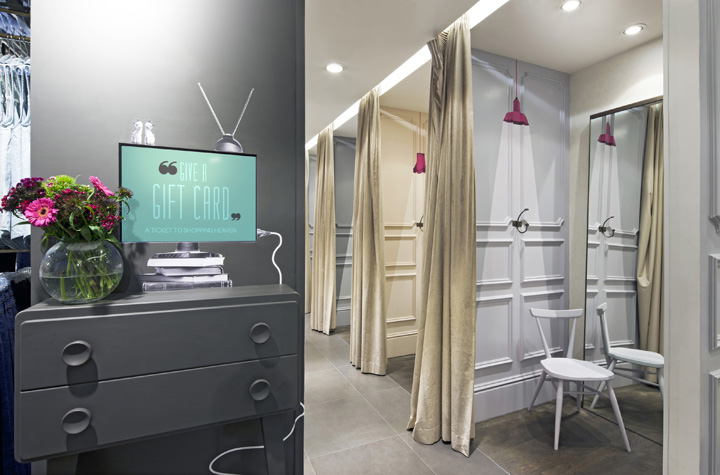 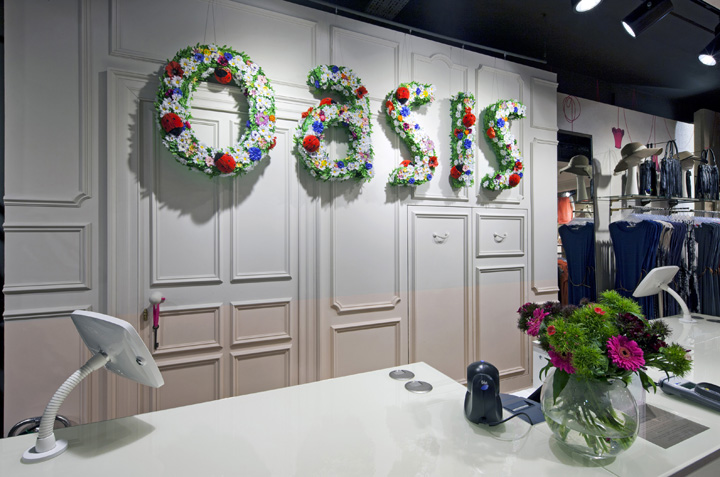 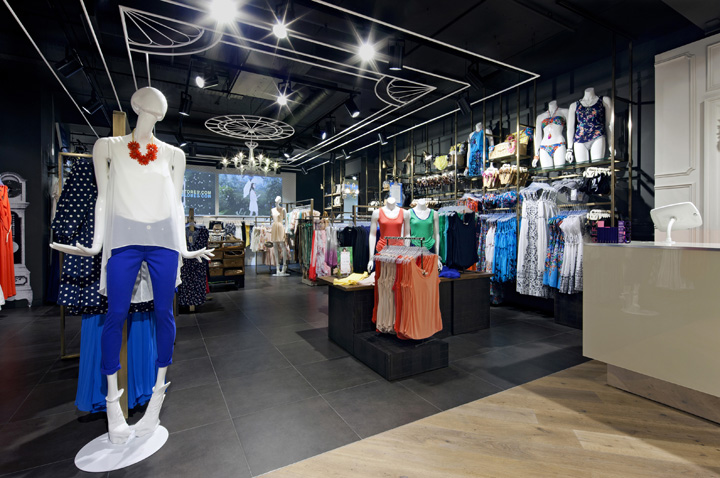 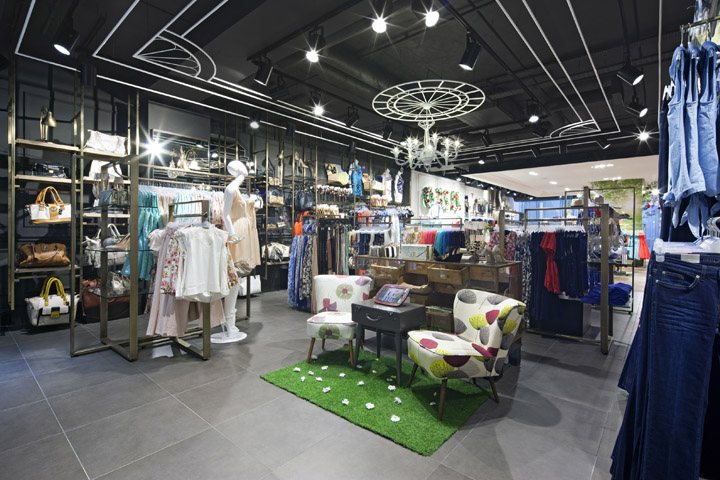 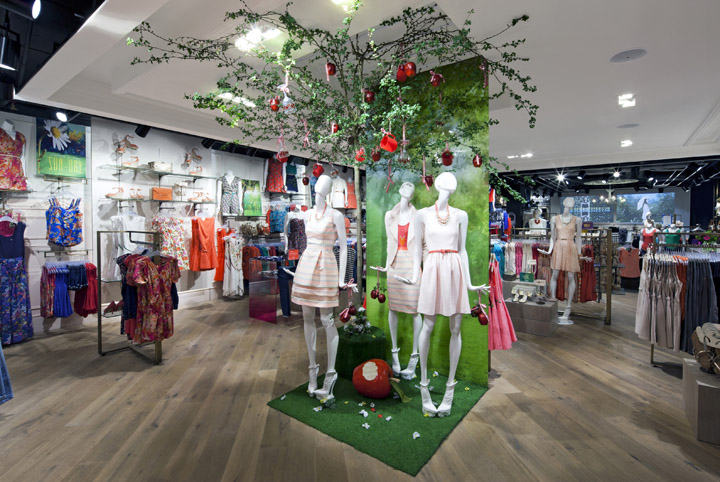 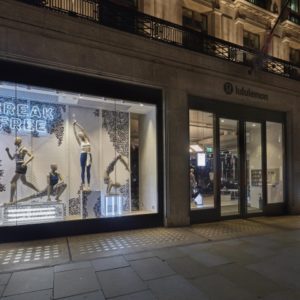 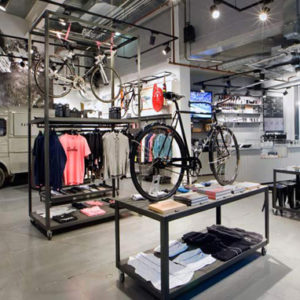 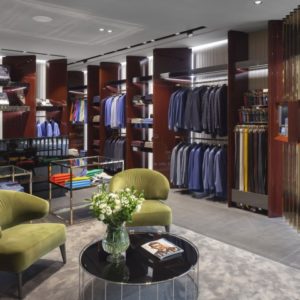 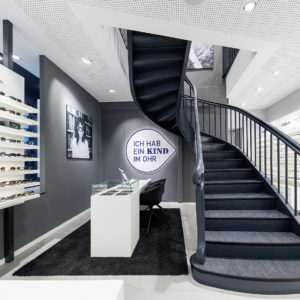