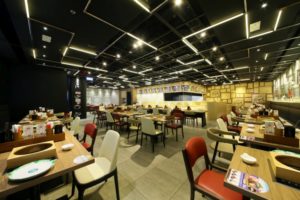 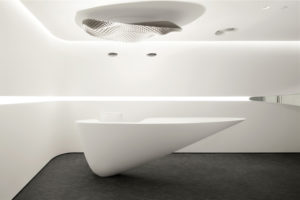 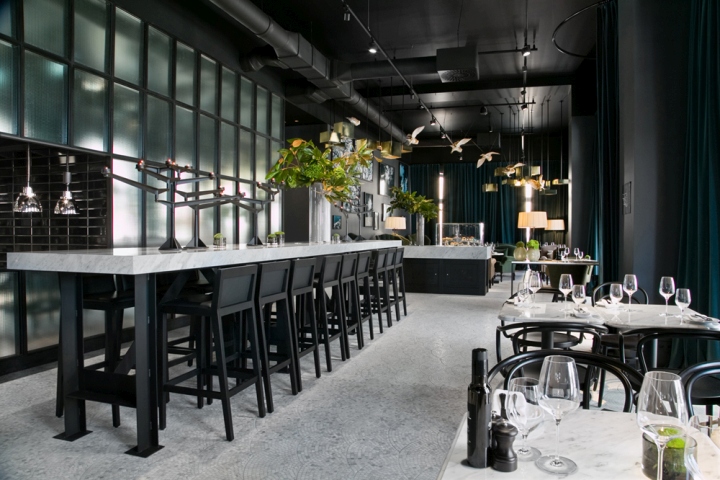 Adriatic is a unique hotel with art providing an unrepeatable ambient in which fantasy and reality interact through artistic interventions and everyday objects. The existing building situated on an attractive site next to the sea was constructed in 1913 as one of the first hotels in the region and is nowadays the only one situated in the urban structure of the city of Rovinj. By a comprehensive reconstruction and a collective effort of creative artists from Croatia, Slovenia, Austria, Italy, Germany and France, gathered around 3LHD concept, the hotel was transformed into a luxurious focal point of the city. Traditional, authentic historical appearance was maintained in the exterior, while the new interior designed by Studio Franić Šekoranja with 3LHD is visually lavish, eclectic, modern, classic and elegant, with an abundance of texture, shades and colours. When designing the interior concept the emphasis was placed on creating the atmosphere and aesthetics rather than the restoration of the original interior. The main characteristic of the interior are site-specific art installations, complemented with smaller works that are placed throughout the space, whose authors are well-known international artists. The entire hotel art collection consists of more than a hundred pieces of museum value which will be enjoyed by curious guests looking for a different experience. The artists and art pieces were selected by curator Vanja Žanko. The artists used various media and were united on the project by an active wish for a deeper connection with the space and activation of locality and its heritage value. The creation of site-specific art works required a constant fine-tuning and testing of their own practice from the artists, and the work on this hotel represented a true collaborative challenge for all of the participants. In addition to preserving the heritage values ​​of the hotel, historical layers of the hotel were interpreted in the design, and the artistic interventions created a contemporary cosmopolitan spirit. The building is located in a protected historic centre of Rovinj, causing the renovation project to have a lot of predetermined factors. The conservationists’ attitude was fully abided by and full reconstruction of the facade was implemented without any possibility of modern reinterpretation of certain of its sections. Changes were allowed in the interior. The program concept set by the investor for this reconstruction is based on spacious rooms and ground floor catering facilities oriented to all guests of Rovinj, not just the hotel guests. A series of interventions thus opened up the interior and made it more representative. Emphasis was placed on maintaining the existing staircase that leads from the first to the fourth floor. The new staircase from the ground floor to the rooms is set in an eccentric ratio relative to the ground floor plan in order to open the public hotel amenities (caffe, brasserie) towards the town square.

Each area in the hotel was treated individually and emanates a different atmosphere: the brasserie is comfortable, in Mediterranean shades and intertwined with the scenery, black hallways are illuminated by artistic light installations leading to white and airy rooms overlooking urban life of the old town. Dark mirrors on bathroom room walls negate space and make classic rectangular ground-plans “anti-classic”.

Brasserie and Caffe bar on the ground floor are oriented towards all guests of Rovinj, not just the hotel guests. Croatian artist SofijaSilvia and Slovenian artist residing in London Jasmina Cibic designed works filling the catering area with synergy. Atmospheric photographs of the Golden Cape and Rovinj archipelago by SofijaSilvia reveal a dreamers rapture of an adventurous traveler; this is how the hotel guest feels while looking at the fairy-tale scenery on the photographs. Jasmina Cibic’s installation is suspended from the ceiling, visually emerging from photographs into the area with flying birds leaning against shiny postaments. Referring on decorative ceiling elements from Haludovo Palace on the island of Krk it brings back memories of the shaping of one of the first modern Croatian hotels, constructed in 1972.

Spacious bright rooms appear like artist studios; their intimate ambient provides a feeling of an elegant home instead of a hotel room. Room sizes vary, furnished very similarly but containing completely different works of art. Two artists reacted to the wonderful weather conditions transforming the local climate into a paradise destination. French artist Abdelkader Benchamma created drawings on the spot, directly on room walls, in clean and intense lines, inviting guests into a melancholic and dreamy vision of the universe and its natural phenomena which can appear as fantastic creation. Croatian artist Igor Eškinja in his subtle and elegant approach, prone to experiment with various techniques, dedicated himself to exploration of almost forgotten photography technique cyanotype.

The most luxurious room in the hotel has a unique view from two balconies, a freestanding bathtub by the bed and oil on canvas by the Croatian painter Zlatan Vehabović. He fuses classical and modern values in his painting, questioning the technological development and achievements of the 21st century. White rooms are entered into from spacious black corridors containing works dealing with various aspects of light, an important artistic material in this project, transforming halls into light corridors. Italian artist Massimo Uberti draws architecture as if using luminescent pencil in space. A light installation in the shape of a door invites the observer to play with his own imagination; imagine the worlds residing in this hotel area before numerous renovations. Way back in 1963, Croatian artist Goran Petercol, during a night walk through the empty streets of Rovinj, using long expositions made his first photographs without being able to predict their future role. Exhibited at the hotel, they are set up along the present moment we are witnessing as we watch that same space.

In the corridors the emphasis is placed on preservation of the existing staircase passing through all floors, the only original element in the interior – containing an artistic installation of the Austrian artist Valentin Ruhry. Ruhry’s work is almost 15 meters high and passes through and connects with the old hotel staircase, the only area maintaining its original form and hence the spirit of a century-old building. Geometrically abstract composition of rectangular lines is the carrier of fluorescent tubes creating a surprising atmosphere and providing light to the area. Unique uniforms of hotel employees were designed by the artists from I-Gle Studio to match the concept of joined traditional and modern artistic expression. They represent a specific aesthetic manifesto underlining the basic idea of Adriatic as a hotel with a hundred-year heritage.

Inspiration for the visual identity designed by Lana Cavar, Marino Krstačić-Furić and Ana Tomić was found in the eclectic character of the hotel. It is a clash of old and new architecture, of classical and modern, relaxed and sophisticated. 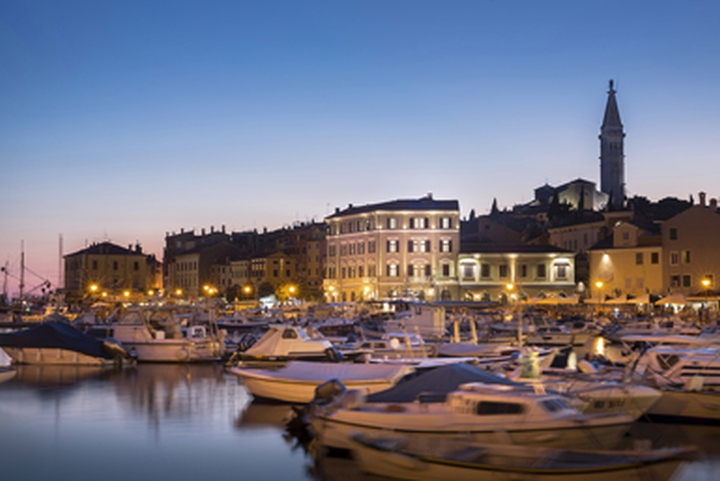 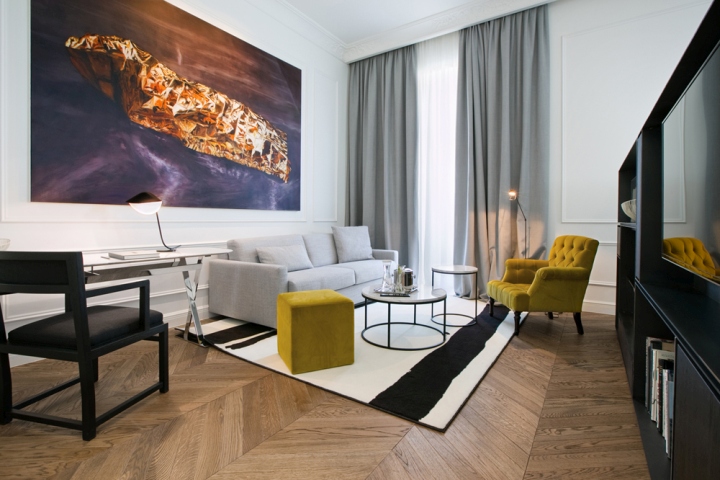 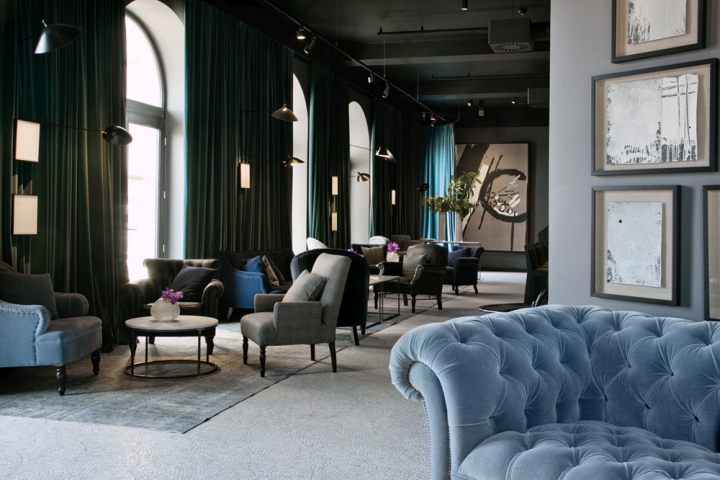 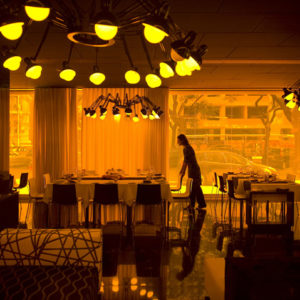 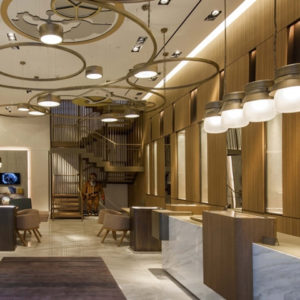 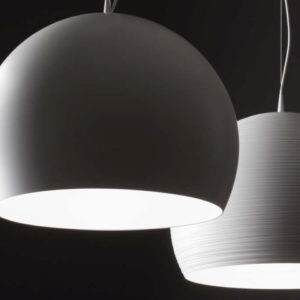 B Bubble by B LIGHT by retail design blog 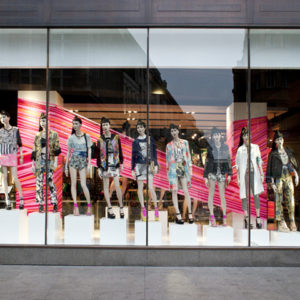