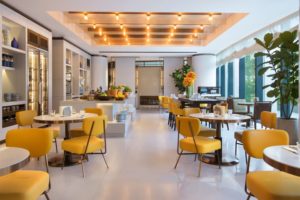 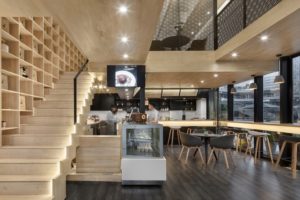 At the end of last year, Knoblauch, the furnishing and shopfitting specialist from Markdorf, opened the new café-office-shop. As the unusual sounding name suggests, the 1500-square metre area consists of three parts: The office for some of the roughly 240 staff members, the shop for designer furniture from Knoblauch’s own production or from well-known brands, and the semi-public café. And as the new name made up of three parts indicates, the three areas belong together and blend into each other. The furniture shop used to be separate from the office. In the past, the people at Knoblauch could only dream of a real café. Out of necessity, because an office space in the neighbourhood was no longer available and there was no extra room in the existing building because for the colleagues moving back to the headquarters, Knoblauch started to reconsider its spatial designs and organisational structures. While at the same time also keeping an eye on the needs of customers.

The concept
Knoblauch has been firmly established as a shopfitter in the fashion and sports industry since the late 1980s. Ever since Jürgen Zahn joined the management around the turn of the millennium, the company began to make its own designs. Today, the company primarily designs, develops, builds and, in its capacity as general contractor, implements holistic furnishing concepts in the retail, catering and hotel sector as well as for office fittings for businesses and upmarket private houses and apartments. “We create meaningful spaces” – that’s the company philosophy. Making things as easy as possible for the customer is an idea that’s firmly anchored in the minds and hearts of the staff. It logically follows that Knoblauch offers a comprehensive all-round service. This includes the delivery of the furniture, a made-to-measure service as well as tables, chairs, sofas etc. by well-known designer brands. Knoblauch thus offers a balanced overall design concept, from the outer shell to the barstool. Everything from a single source.

And that’s precisely the portfolio and mindset that the company communicates with its new space. “Come in, dome some shopping”, that’s the invitation. Guests and visitors browse the two floors, look at everything and buy something if they want to. Be it a desk or a dining table, a sofa or an armchair, a cushion or a carpet, a lamp or a shelf. In a relaxed atmosphere, over a coffee and a bite to eat, the design, furniture and interior design projects are discussed. As if you’re sitting at your dining table at home. Straightforward and unconventional – these are two more key words from the Knoblauch philosophy. And that’s exactly what springs to mind when you enter the new premises. It’s not a proper shop, not just an office, and not a normal café. It’s not a showroom, not a coworking space and definitely not an open-plan office. It is inviting and homely. Yet it’s tidy and looks professional. In brief: The café-office-shop is a meaningful space.

The actions
The floor plan on the ground floor (furniture exhibition, approx. 300 sqm) largely stayed the same. What’s new is the opening into the metal workshop, closed off but visible through a sliding glass door. This created a symbolic link between the company divisions and also provides visitors an unusual insight into the company. To gain additional space on the first floor, a mezzanine level was installed above the metal workshop. This created an additional 440 square metres of floor space. From this new area you can see the workshop, the joinery, through a large glass front. When you’re standing in the café, in the centre of the building, you can see the large hall in one direction, and in the other direction, through the building’s giant glass front, you have a clear view of the city and Gehrenberg mountain.

And there is also a new opening at the top. Part of the glass dome in the roof was opened up to create a light-flooded roof garden using a thermally separate steel construction made from 40 mm RP-Iso-Fineline. In the middle of the roof garden there is a more than 200 year old olive tree. So when you’re in the office area, light comes in from four sides and from above. The rest of the light comes from LED adapter spotlights which are controlled via a Casambi app. Then there are accent lamps by Anglepoise, Jieldé, Menu and others. There is underfloor heating underneath the polished coating, which is powered by the own waste wood heating system. There is also a separate ventilation system with heat exchanger for fresh air. The cooling system uses pipe connections and cassettes.

Parts of the wall are panelled with arolla pine wood, which hides sound insulation made from AixFoam and sound-proofing material. Stage curtains by Gerriets sound proof the meeting rooms. Mobile partition walls and notice boards covered with felting can also be used as soundproofing. Finally, the perforated trapezoidal sheet ceiling also contributes to a pleasant room acoustics. There are two open meeting rooms, the larger of which can be divided into four smaller rooms by moving the curtains. Three boxes made from arolla pine wood are available for internal meetings or to create quiet working areas; the fronts of the boxes can be semi-opened towards the room using adjustable wooden slats. The material store, which stores more than 2300 samples, is also integrated. One part of it can be separated off using Gerriets curtains.

The total area is partly furnished with furniture designed and produced by Knoblauch and partly with products by COR, Prestoria, Hay, Vitra, Zeitraum, Miinu and others. The height of most of the desks can be adjusted either mechanically or electrically. Another highlight is the team table from the own production, which is five metres long. Despite its length the table has no annoying legs. Because of that as well as the continuous power supply in its centre, it has room for a flexible number of workstations. The fewer workstations, the more space people have at the table. Currently, it offers room for six workstations. The flooring of the roof garden and the café is made from own steel tiles with UV coating. The counter is covered with tiles by Dtile. The special feature: The corners and edges are covered with rounded tiles. The café is fitted with a Faema espresso machine, a dishwasher by Hobart with special décor and a custom-made fridge-freezer by K+T. 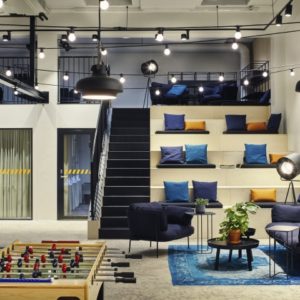 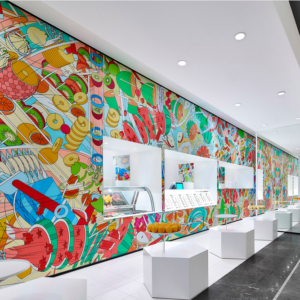 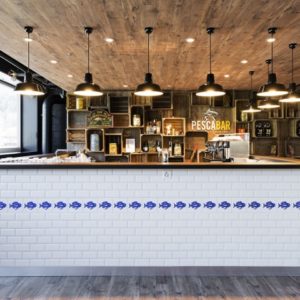 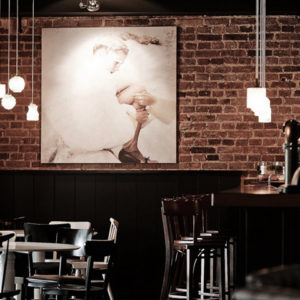