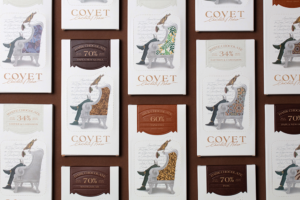 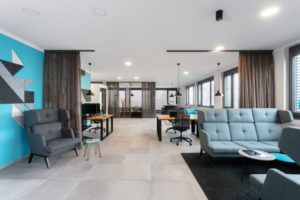 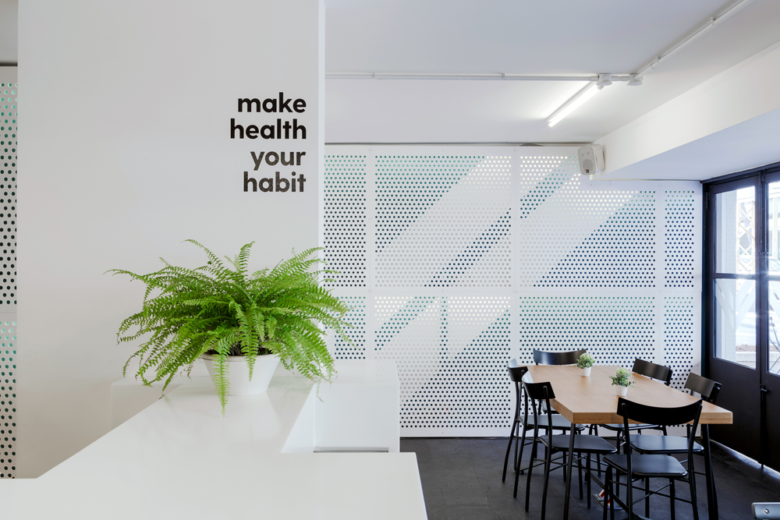 The Concept – V&V is a neighborhood Gym and Health Bar located in the heart of Beirut. The space occupies the Ground floor and basement area of a longstanding building situated along one of Badaro District’s beautiful calm residential streets.
The approach was to create a space for people to hangout, workout and be part of a healthy neighborhood lifestyle. Hence, the idea of bringing the outside in, spatially and visually; all the way from the terrace to the ground floor interior and down to the basement.

The street’s extension to the space is first achieved through the main façade; it spreads through the whole space and is 22 meters long, it is a dominant feature in the design. Folding black powder coated steel framed glass doors open up fully, merging the outside with the inside, inviting people in; even when closed, visual communication is achieved through the see-through facade.

Secondly, this continuity is further reinforced by the basalt flooring which extends from the side walk to the terrace and finally all the way in. Thirdly, verticality is a strongly present element . It is highlighted by 3 main elements: the void on the ground floor overlooking the basement, the main staircase connecting both floors and finally the core which is a major element connecting both floors visually.

Fourthly, the exposed design of the ceiling giving the space a raw feel, further accentuates this sense of continuity, all cables ducts and ACs are exposed and painted white to go melt into the ceiling and sort of direct you throughout the space. Fifth, the interior glass partition framed in white aluminum, add light and transparency to the interior. This allows one to see through a series of spaces, from the studio one can see the offices, physiotherapy room further away and gym space at the far end.

The space is divided into 3 main functions: the Health Bar (Bar and Seating space), the offices, the Gym (studio, Gym, lockers, WCs). The Ground floor is defined by an all-white juice bar emphasizing the idea of well-being and healthy living. The seating extends to the outside terrace and invites people in. This floor also occupies a small gym space, lockers, Physiotherapy and admin spaces and the studio. The basement floor has a more intense function as it contains all the heavy weightlifting, the showers and lockers and WCs.

The Materials – The concept is about creating a space that is friendly emphasizing on the “feel good“ aspect, with a minimal approach focusing on simplicity and pure materials. Two main colors dominate the space: white and mint blue.
White : All the walls and ceiling are white. White perforated aluminum sheet wraps the center element of the space, creating a visual component that defines the core and continues vertically throughout both floors. This sheet is backlit, highlighting the wall behind it and suggesting the space its main identity. The sheet became a main design element which was used as a handrail as well as locker cabinet doors. The main equipment in the basement level is white ,reinforcing the idea of a pure and minimal space. The sinks in lavatories and locker/shower areas are embedded in a thick white Corian slab.

Mint Blue : Color research mentions that blue increases people’s productivity and that weightlifters lift heavier weights in blue rooms. The floor in the basement is covered with Pavisint rubber flooring specialized for gyms and heavy weights which was painted in mint blue and layered with white dotted lines designed to connect the space together and define the main exercise areas as well as the running track. Flooring: The flooring is divided into three main finishes: Basalt flooring extending from the outside into theBar area; the sports flooring parquet for the studio and gym space on the Ground Level and the Pavisint rubber flooring specialized for gyms and heavy weights in the basement. Micro topping was used for lockers and Wcs.

The Light: The entire space is based on an exposed ceiling grid with fluorescent lighting. The Ground floor is flooded with natural light as it is has an exposed façade, however artificial lighting plays a major role in guiding people throughout the space and leading them down to the basement level. The underground level has a ceiling height of 350 cm and contains no natural light. Apart from the exposed ceiling lights spreading across the basement ceiling throughout the heavy lifting space and lockers, a void and a vertical lighting grid extending from the Ground Floor down were created to illuminate the space and give it a light feel. 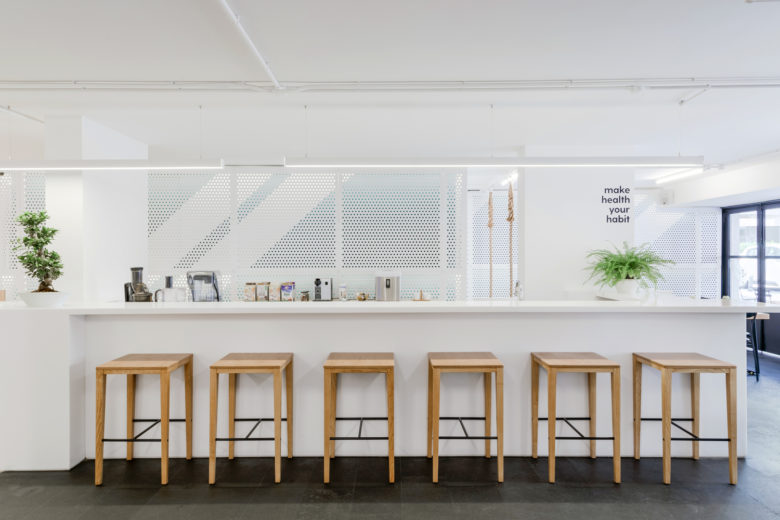 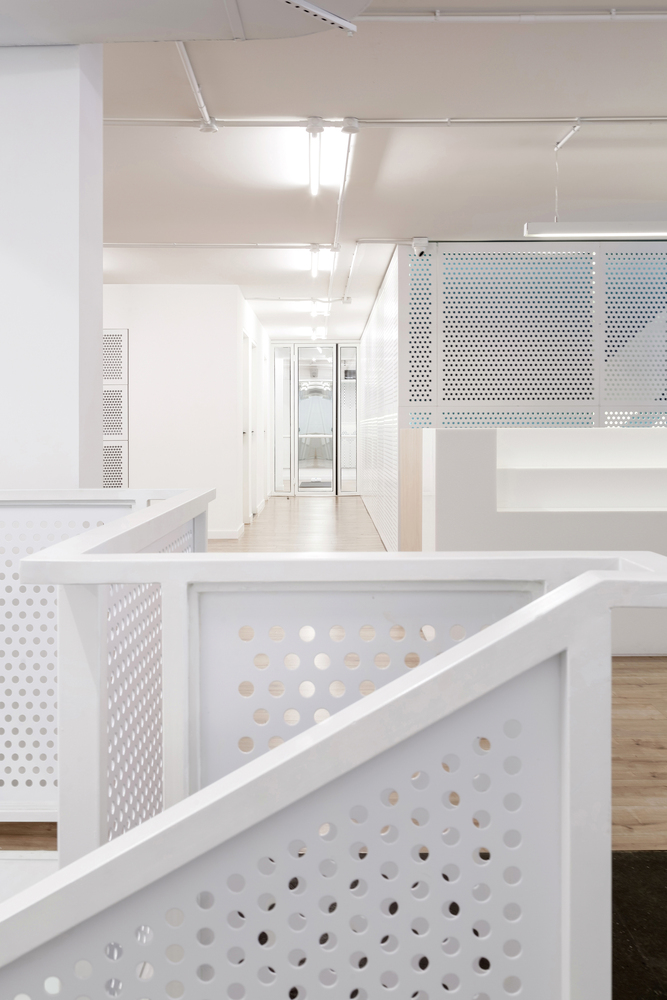 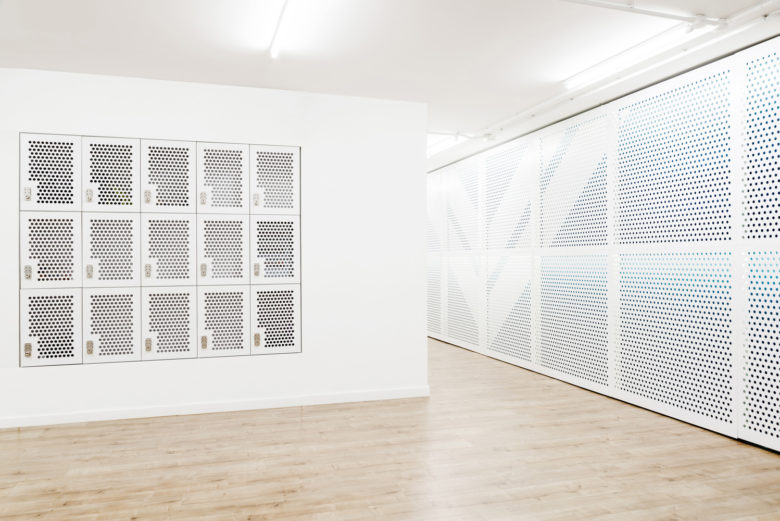 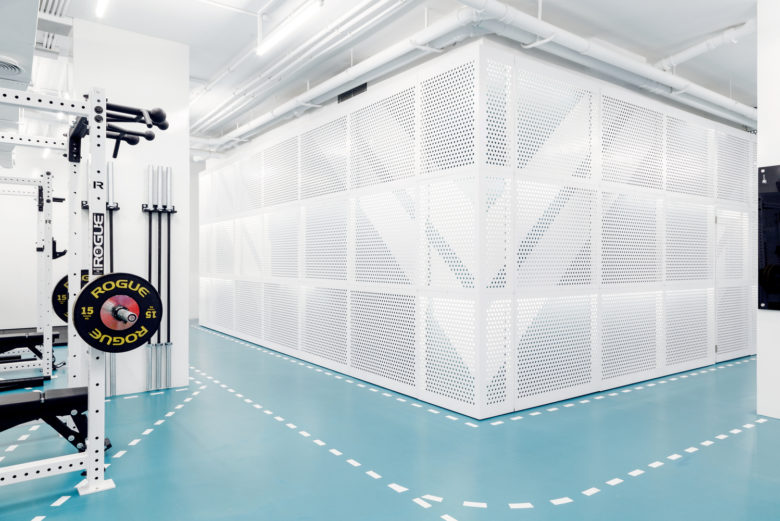 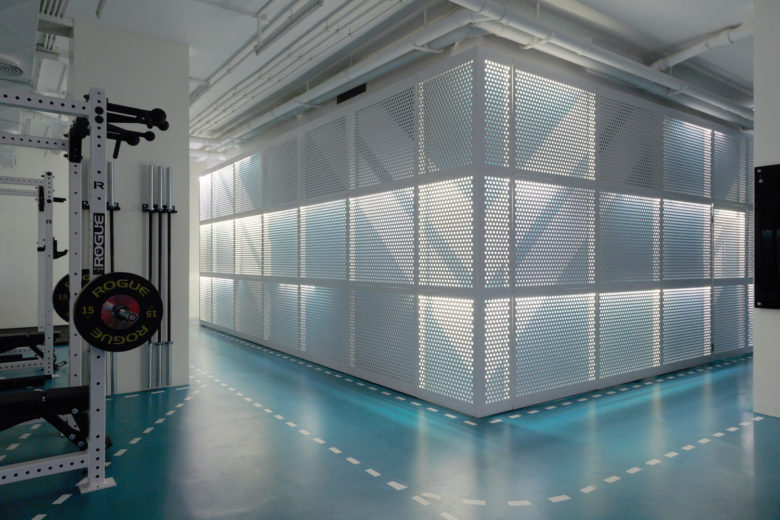 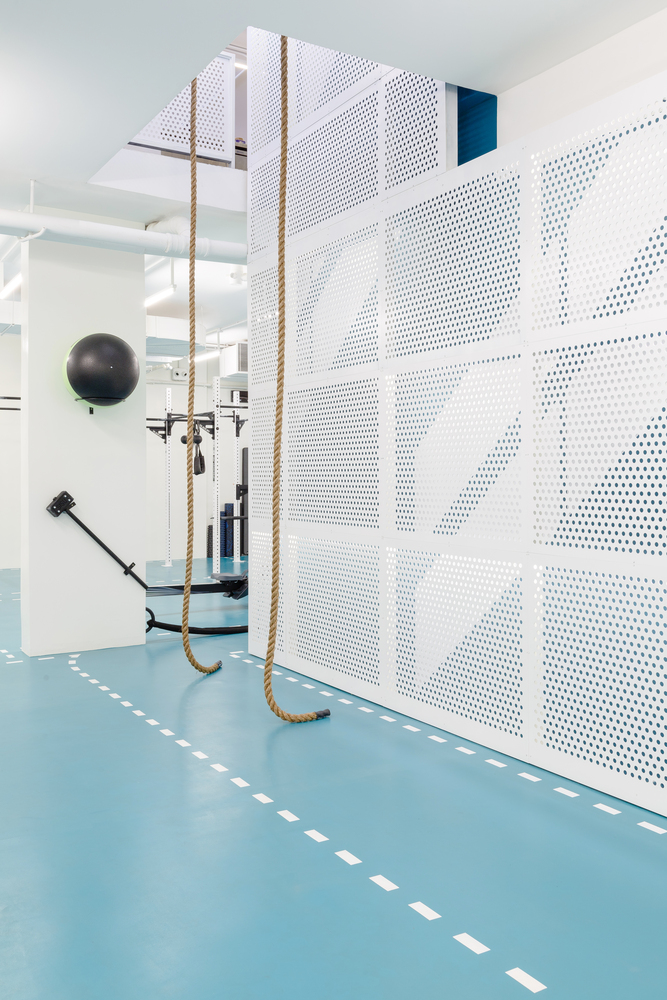 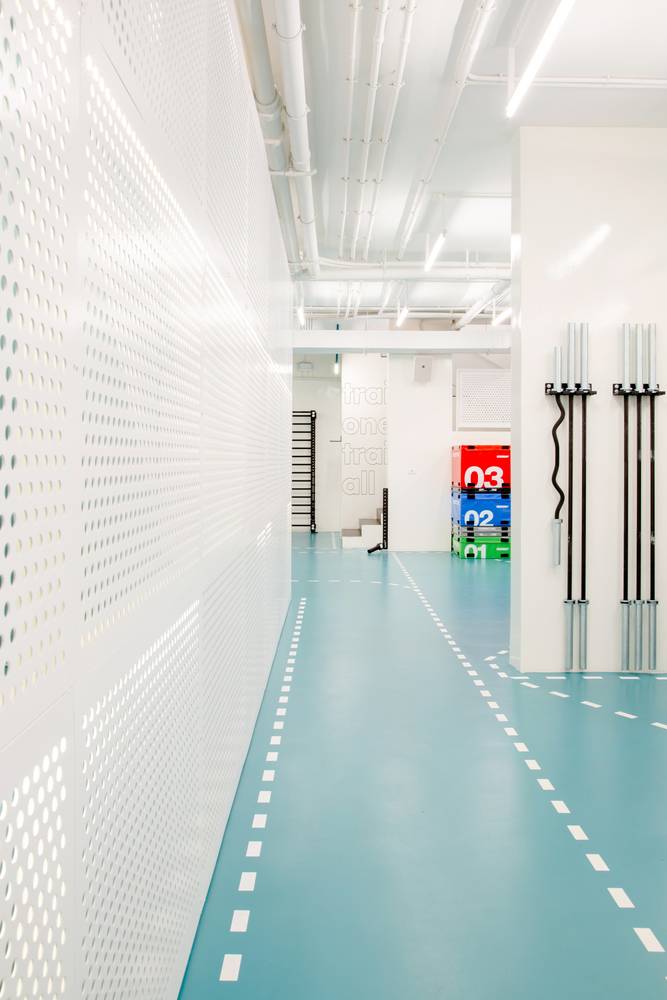 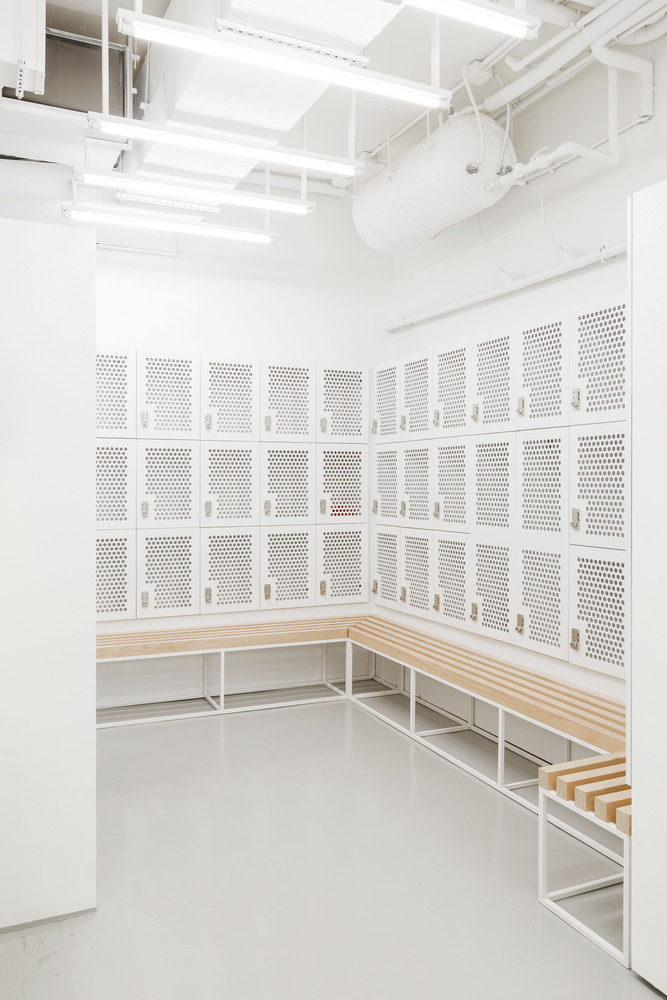 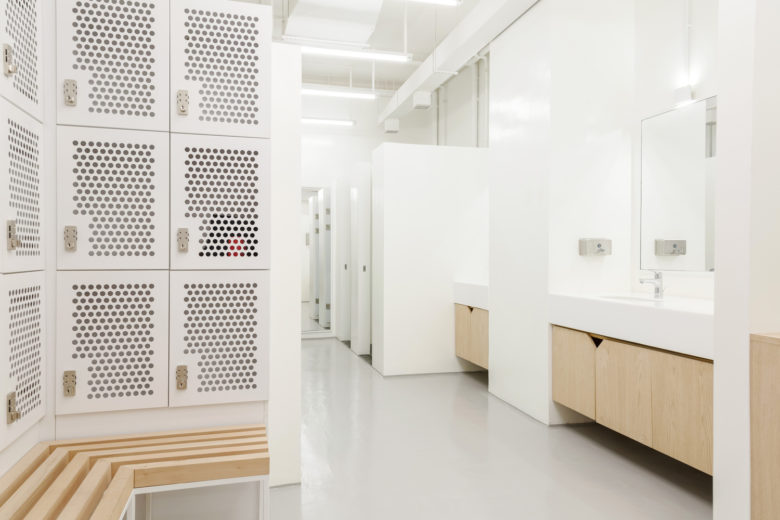 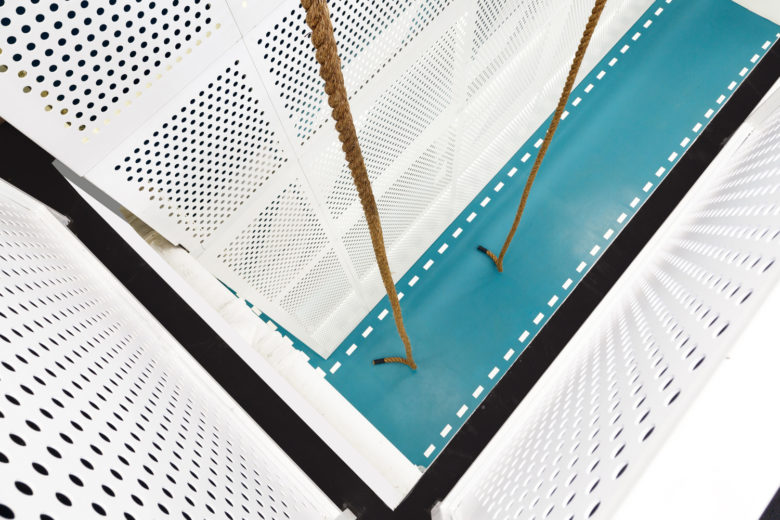 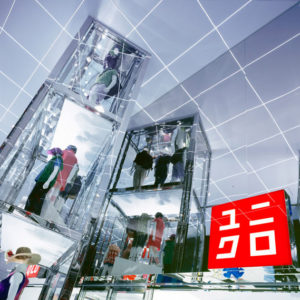 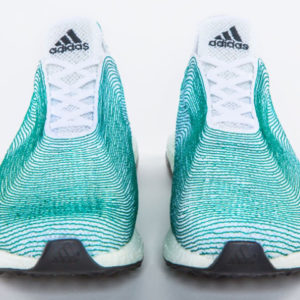 adidas × Parley for the Oceans Sneakers by retail design blog 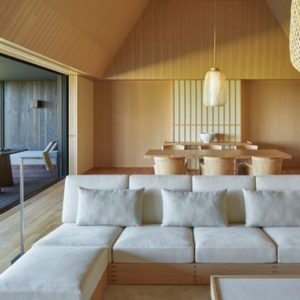 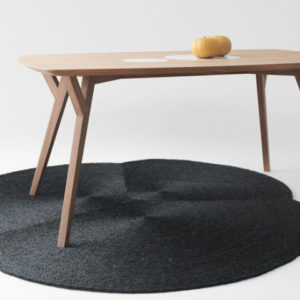