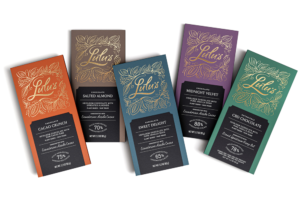 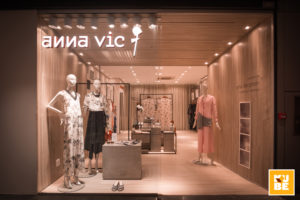 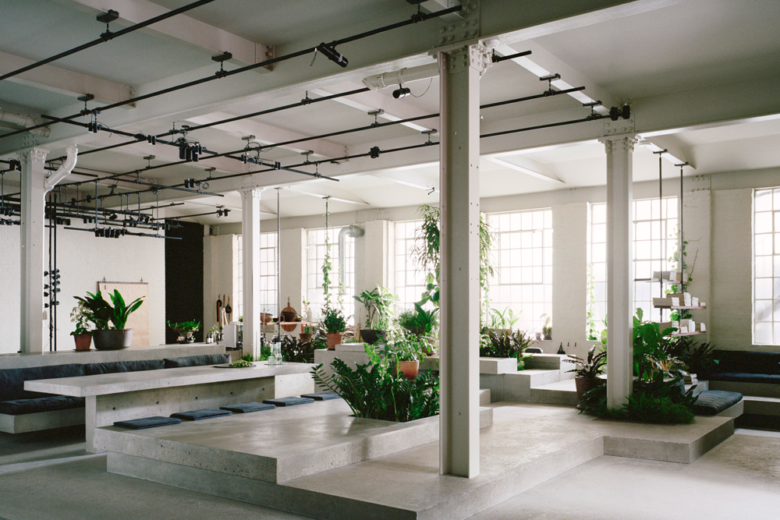 Blocky concrete plinths dominate lighting brand PSLab’s London HQ, which local studio JamesPlumb has designed to evoke “quiet brutalism”. Tucked down a quiet side street in south London’s Bermondsey neighbourhood, PSLab’s HQ occupies a Victorian-era tannery – a place where animal hides are processed to produce leather. The lighting brand, which originally launched in Beirut, tasked JamesPlumb with transforming the historic building into a sequence of “defined yet intertwined” work areas where its staff could easily interact and collaborate.

“We all agreed from very early on that the key was for it not to be an office, nor a showroom – but to become a home for PSLab in London,” said the studio’s founders, James Russell and Hannah Plumb, who had first worked with PSLab on the design of an Aesop store in London back in 2015.

The studio completely stripped back the building to expose its industrial shell, only leaving behind its bare-brick walls, steel columns and a number of sunken pits that would have once been used to dye animal hides.

These pits have been filled with concrete to create a series of different-height plinths, their blocky shape a subtle reference to monolithic structures that Russell and Plumb came across in a book called Bunker Archaeology by French philosopher Paul Virilio.

The plinths provide staff with a casual place to perch and work during the day, but can also serve as auditorium-style bench seating when the brand hosts large-scale events.

Some of them have been topped with slabs of concrete to create more formal work desks, while others have been dressed with linen-covered horsehair cushions to give some areas a cosy, lounge-like feel.

Planters have also been integrated into several of the plinths which, combined with the potted trees and leafy vines that trail from the ceiling, are meant to channel the verdant greenhouses of the Orto Botanico garden in Palermo, Italy.

“The creative direction of the project was informed by a multitude of inspirations,” Russell and Plumb explained.

“Through all of these we developed this sense of what we called a ‘quiet brutalism’, an internal concrete landscape, solid and permanent, yet inviting to the hand and to inhabit,” the pair continued.

Over 350 pieces of black iron were used to build a gantry directly above the plinths. It has been fitted with several spotlights that can be adjusted to create dramatic lighting for talks or product presentations.

“The lights are not products showcased on a shelf – it is not a showroom in that sense – instead they are part of the living space itself and the starting point of a dialogue on the possibilities of light and shadow to be tailored to each project.”

A gridded steel framework that displays sample materials, models and lighting prototypes has been erected on one side of the room, acting as a “spine” between the main office floor and the atelier space.

Beechwood drawers run along the bottom, while higher shelves are accessed by a traditional library-style ladder.

Typical factory-style doors close off a private meeting room with almost-black walls, which has been finished with a mustard-yellow bench and seating by Finnish designer Yrjö Kukkapuro.

Designed by JamesPlumb
Photography is by Rory Gardiner 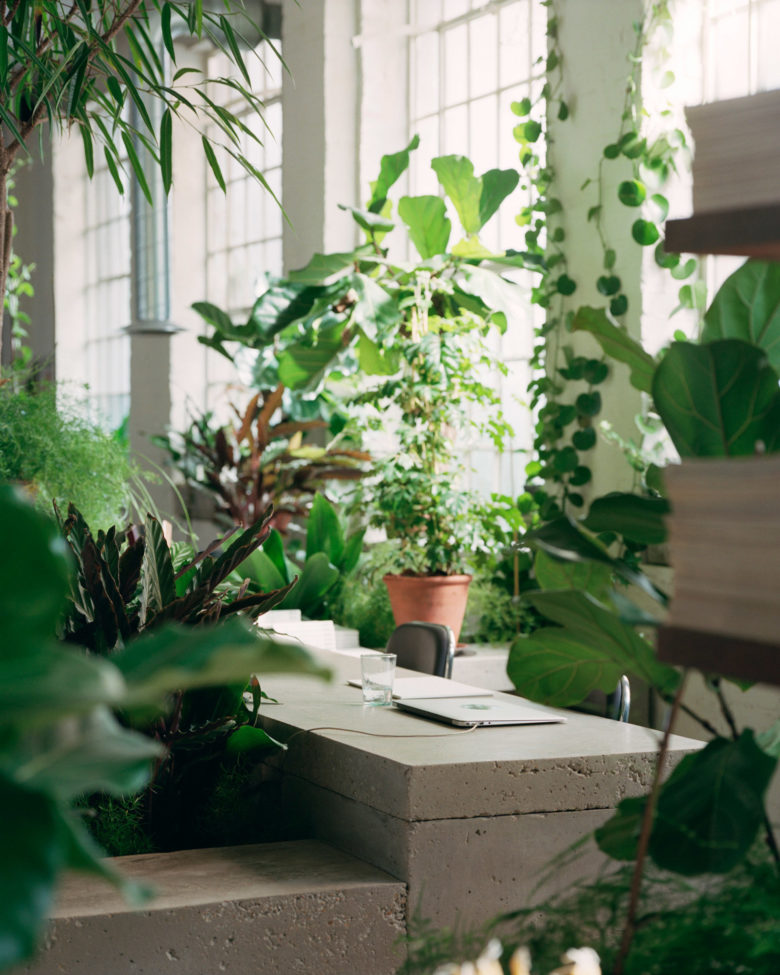 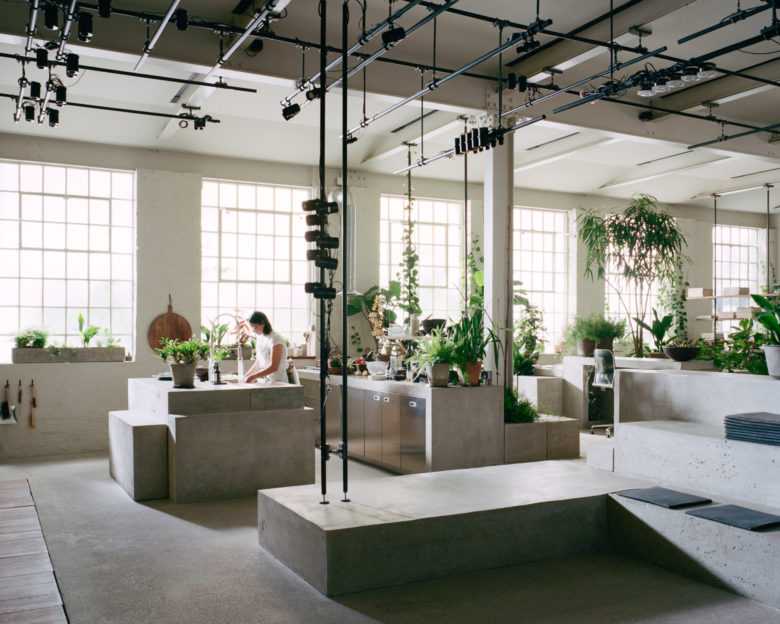 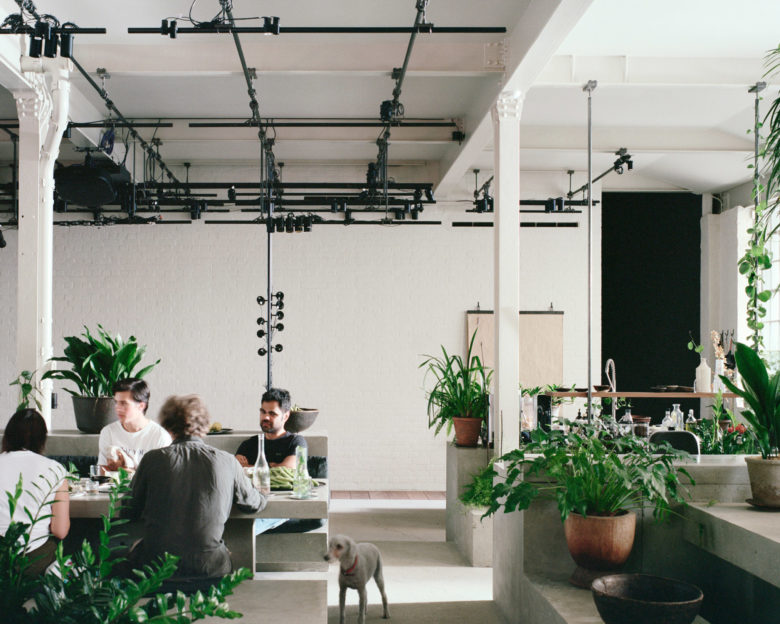 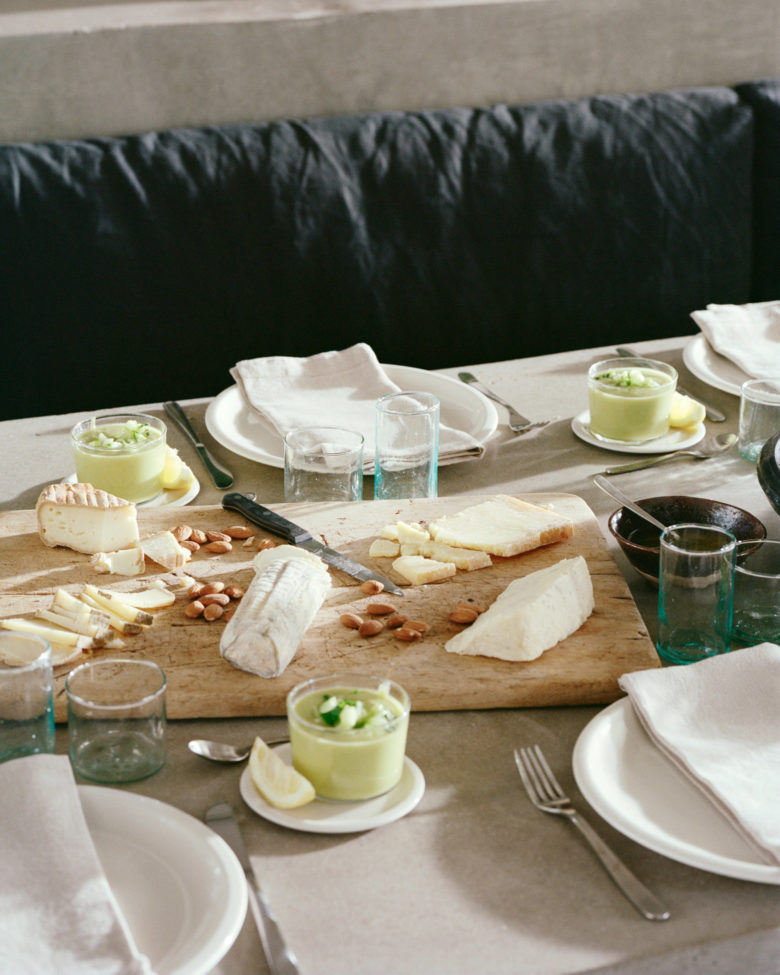 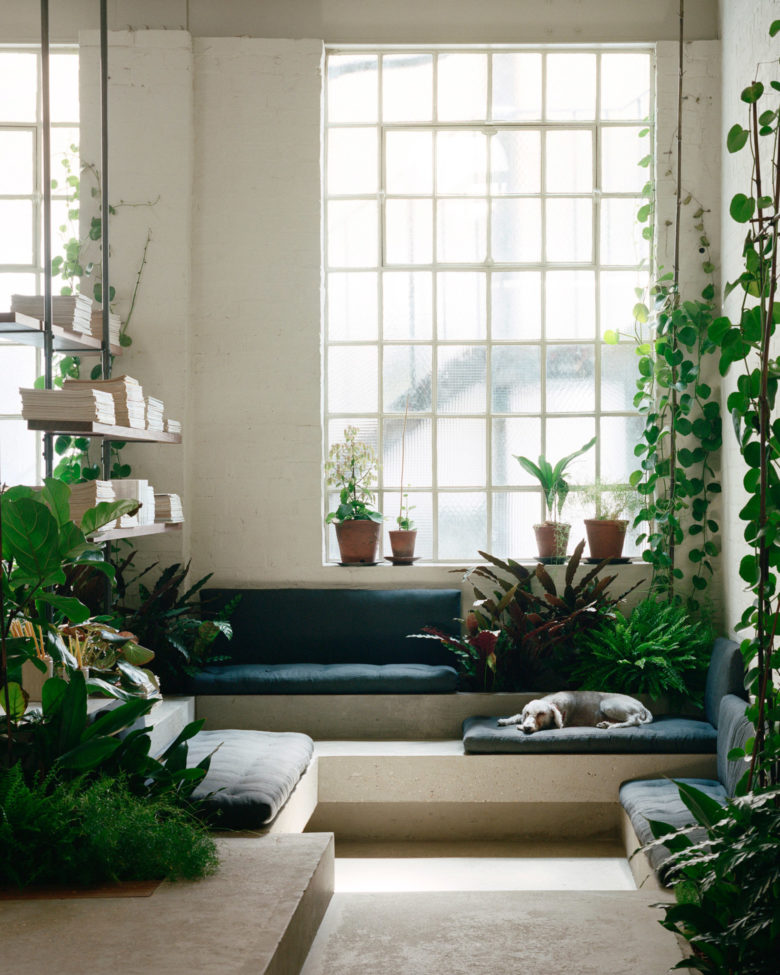 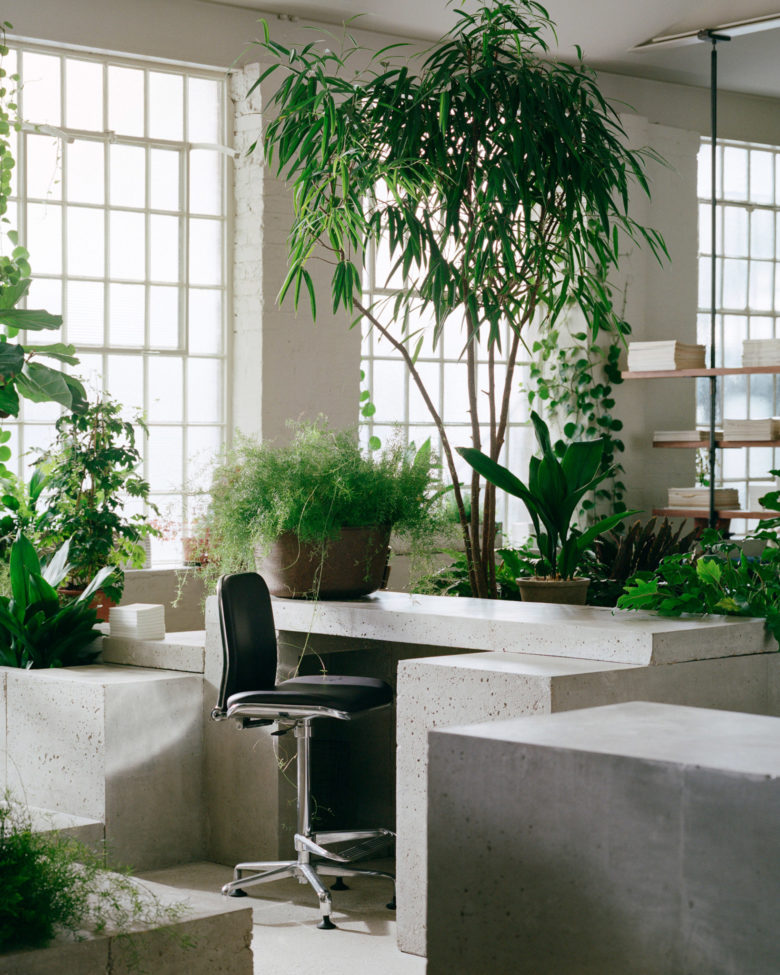 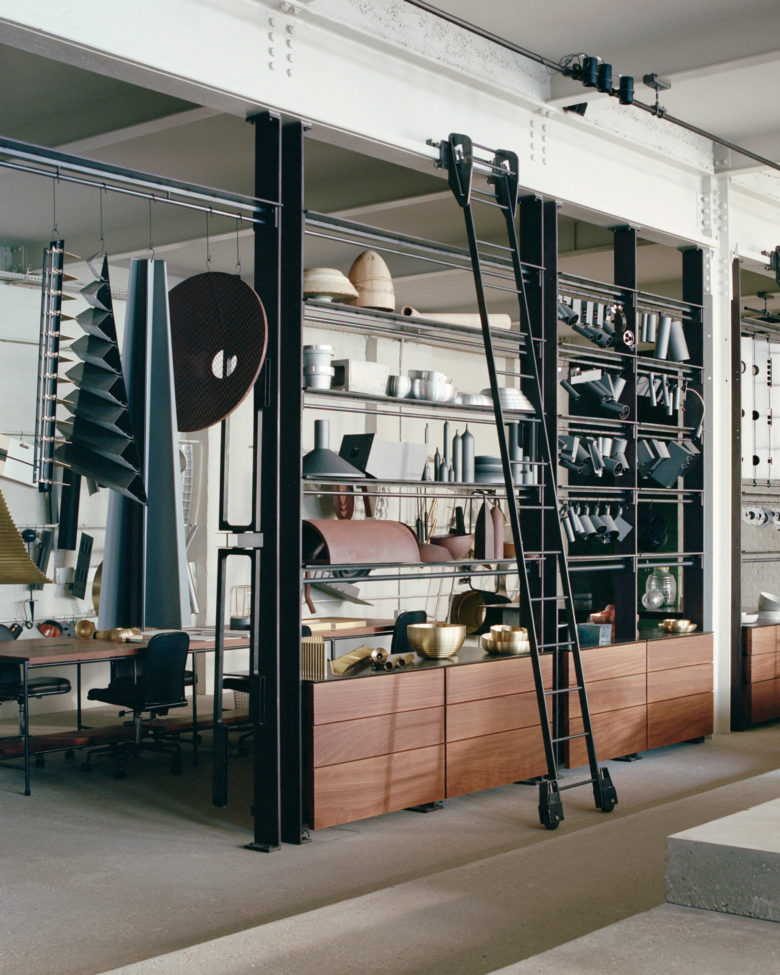 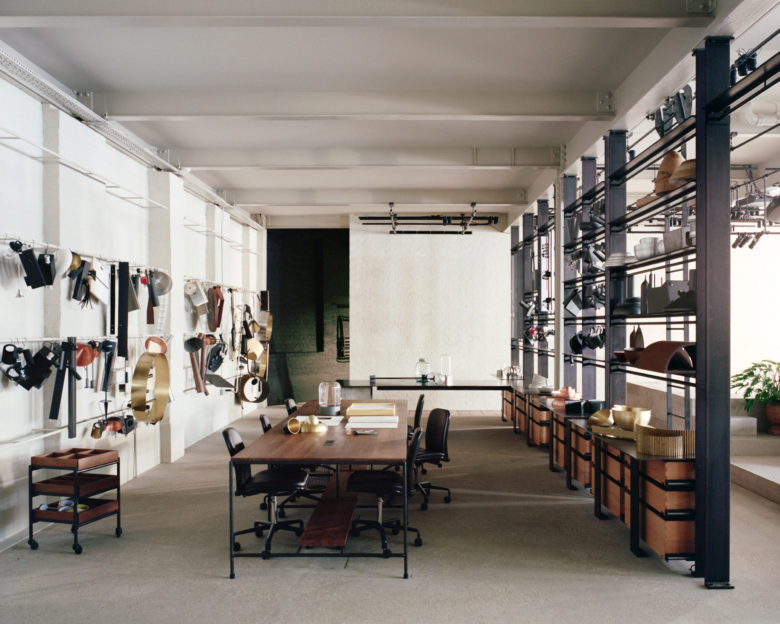 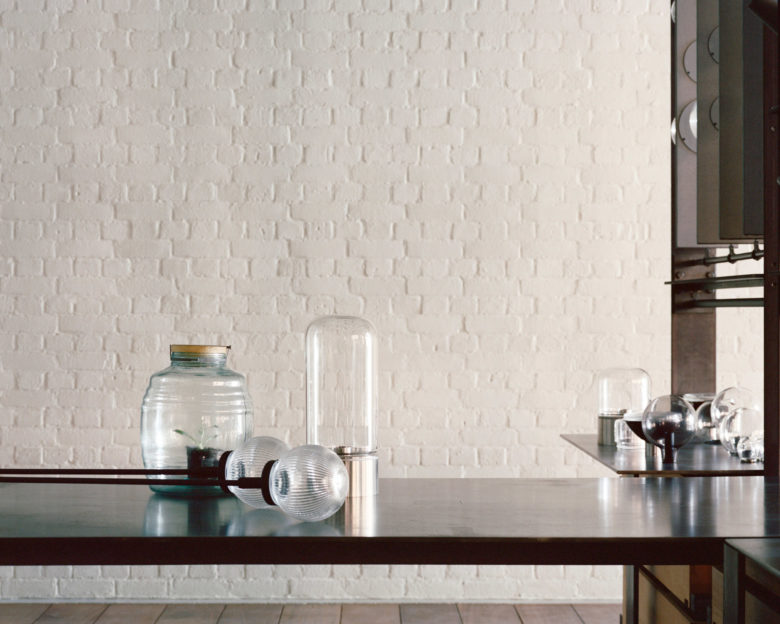 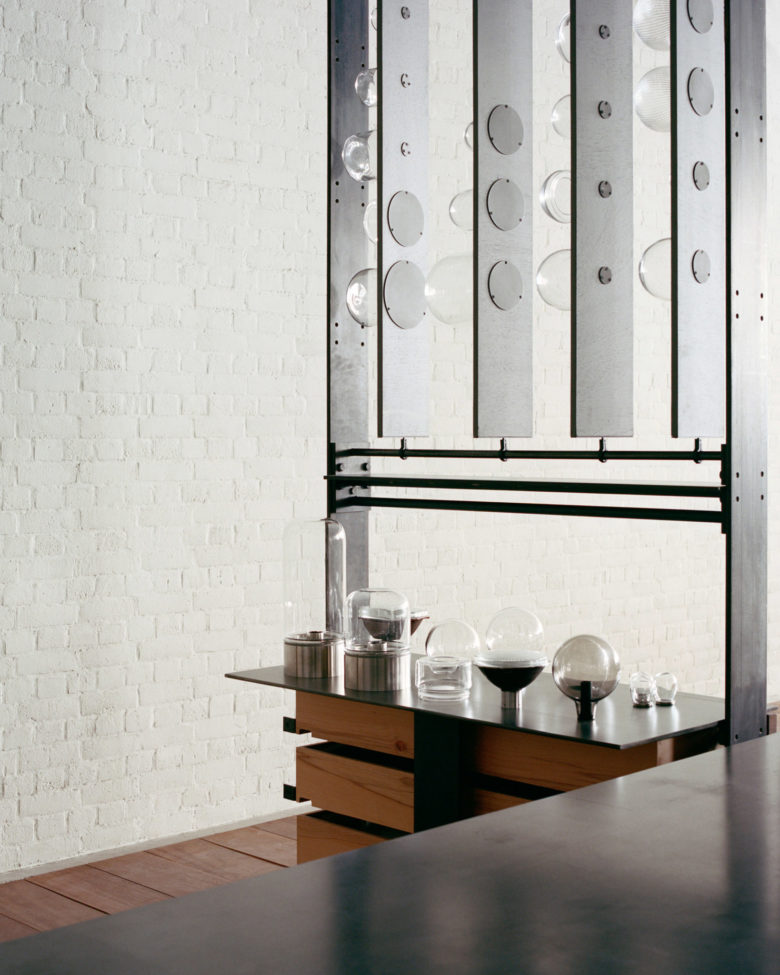 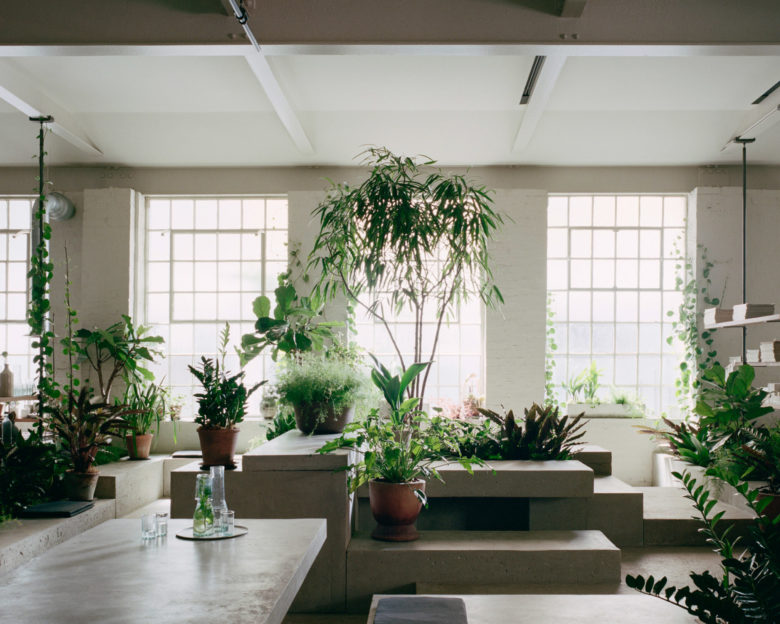 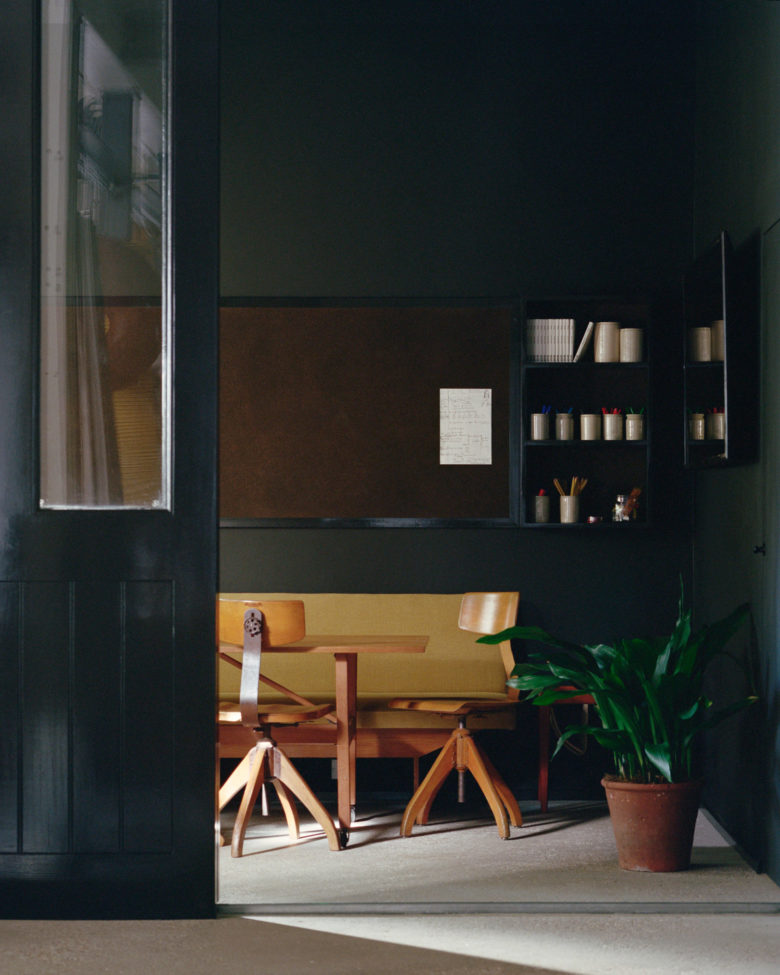 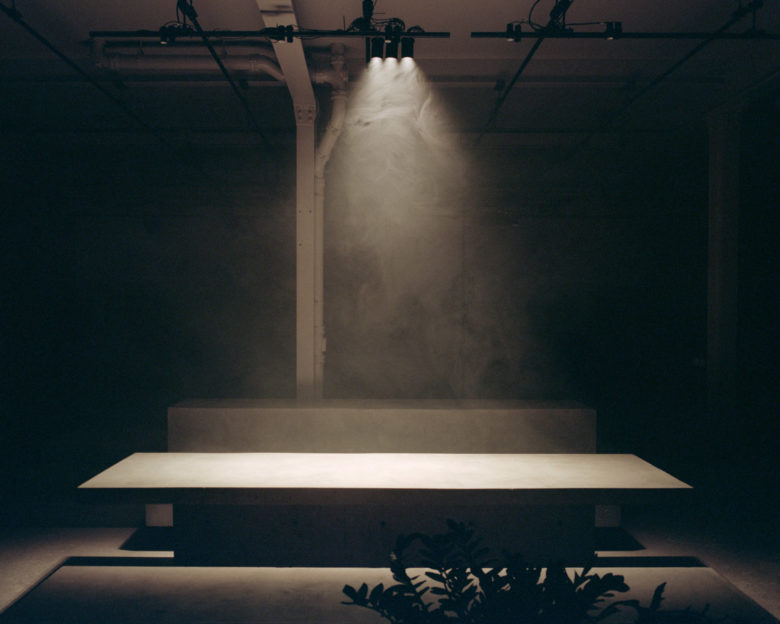 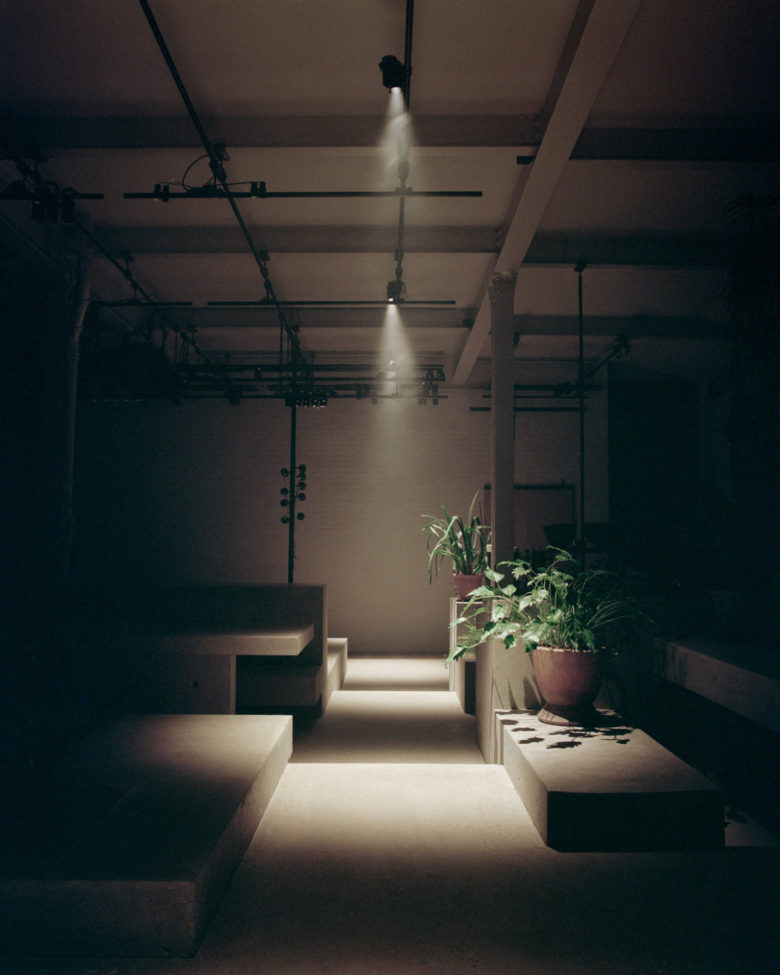 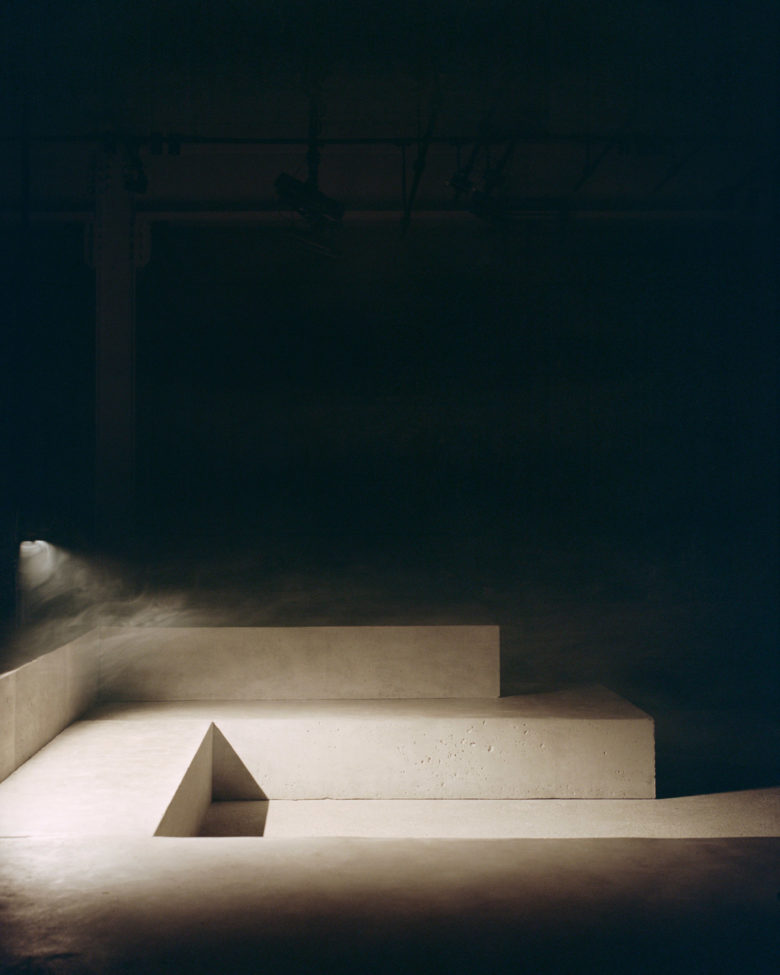 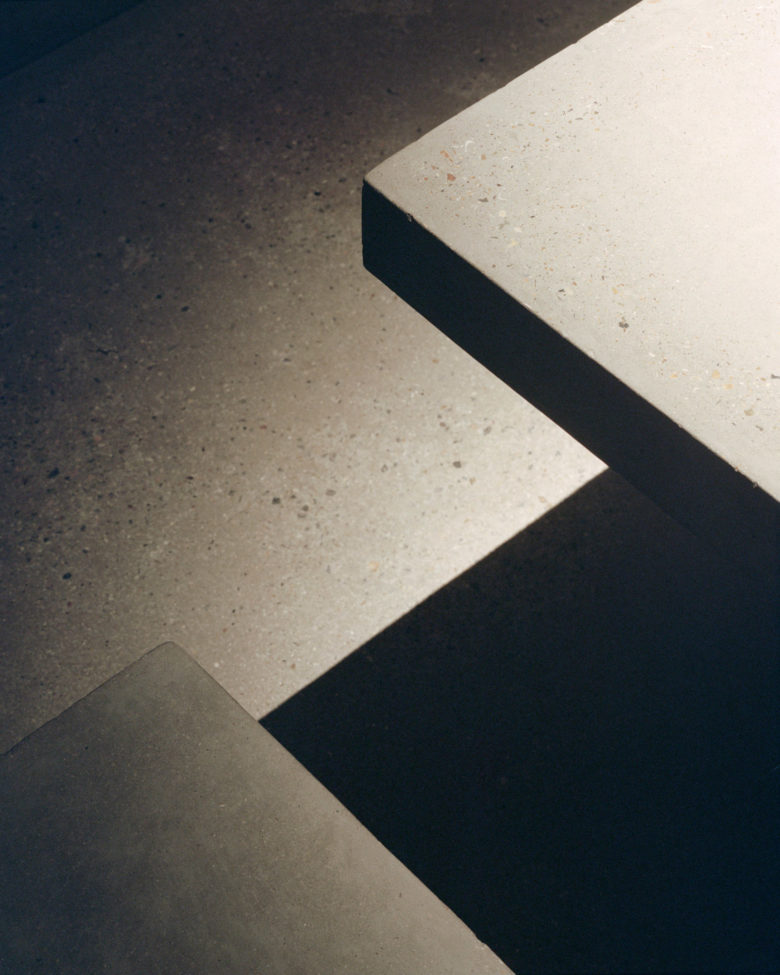 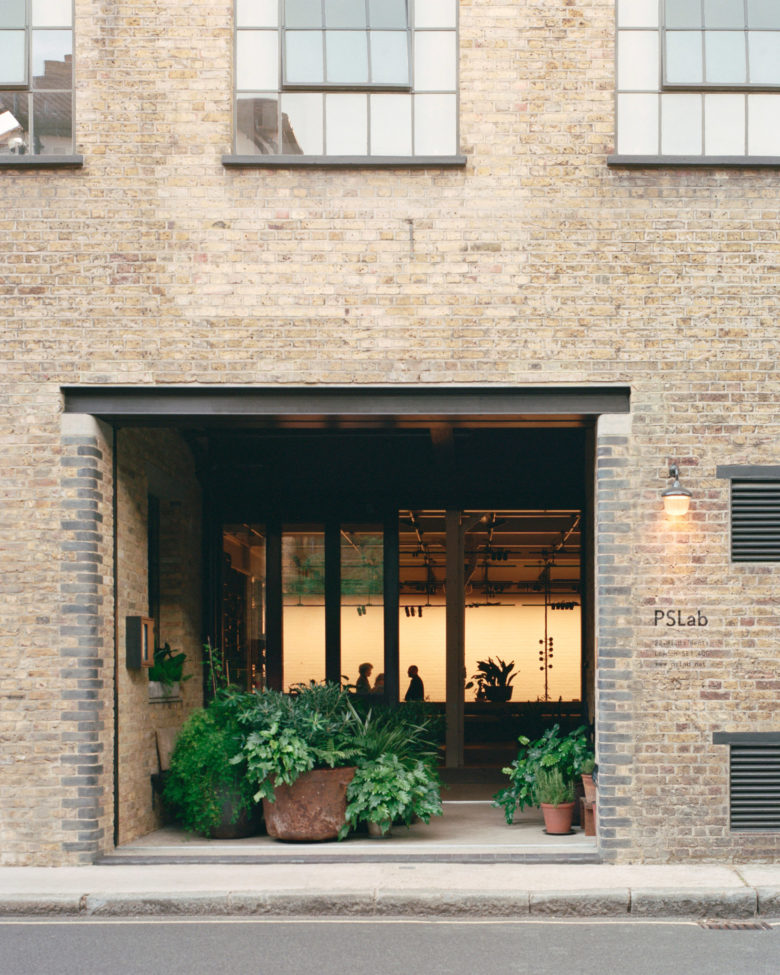 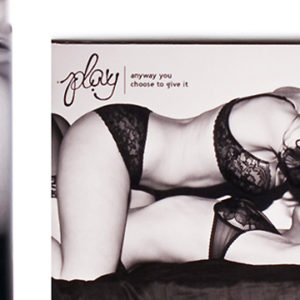 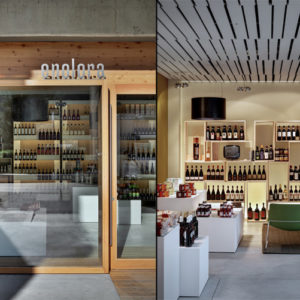 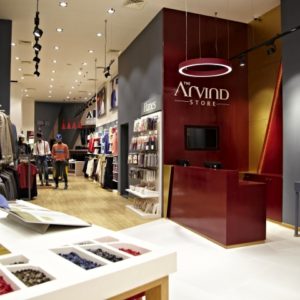 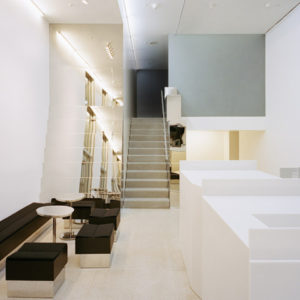