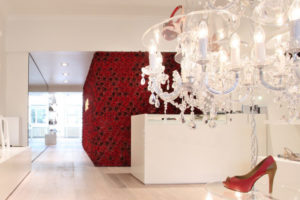 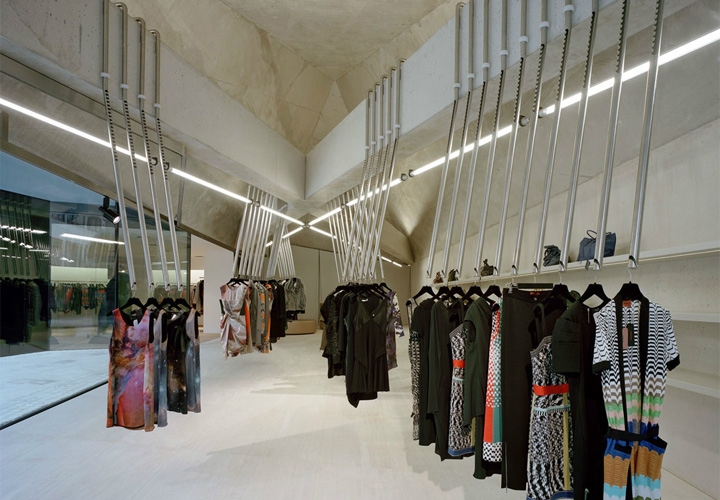 In Europe, new upmarket boutiques are usually a matter of conversion; interior architecture and renovation to existing buildings in historic city centres. So, it’s a rare opportunity that offers architects the chance to realise a completely new building to house luxury fashion retail. But, Pedrocchi Architects have risen to exactly this sort of challenge in the picturesque town of Telfs, located in Austria’s Tyrol, near to Innsbruck. Upmarket Austrian fashion retailer Föger Woman Pure gave Pedrocchi the brief to realise the bold new concept store. Looks can be deceiving. Despite the rather unexpected pastoral location Föger Woman Pure has been one of the most forward-looking fashion retailers in Austria for the past twenty years. It still continues to stock brands from all over the world that it was amongst the first to champion within Austria such as Dries Van Noten, Ann Demeulemeester and Prada. And it continues with its pioneering policy, adding to the list of such stalwarts newer designers such as Rick Owens, Philip Lim, Alexander Wang and Peter Pilotto, something of a ‘local boy’ who, although now based in London, also originally hails from the Tyrol. Working with a clean slate in the centre of the idyllic historic market town, Pedrocchi Architects have created a multi-faceted glass-fronted building – more of a pavilion than something suggesting blockish volume- allowing almost complete transparency between the street and the interior. Two gigantic crossbeams form the support for the structure and also provide a dramatic architectural statement in the otherwise open and uncluttered interior, their evident weight seeming to float miraculously without the support of any columns. The metal staves that hang down from the beam to carry similarly floating racks for the clothes form both an obvious practical function and again draw attention to the beams; like some gigantic fossil skeleton uncovered in the mountains. Apart from clear and bold architectural lines, there are very few decorative finishes within the interior. The walls have been left uncovered in their muted tone of raw concrete, complimented by handsome stone flooring. Apart from a few essential items –such as large mirrors – its more a matter of allowing the pure architectural form to eschew decoration in favour of providing a serene and unblemished space within which the stunning fashion is the only content that is needed. But, just to make sure that no visitor could think it all too completely po-faced or serious, there are occasional touches of irony such as the accessory that every good store needs: a stuffed bear. One gets the distinct feeling that if poor Maria von Trapp had had access to a store like this, the problem might have been solved. 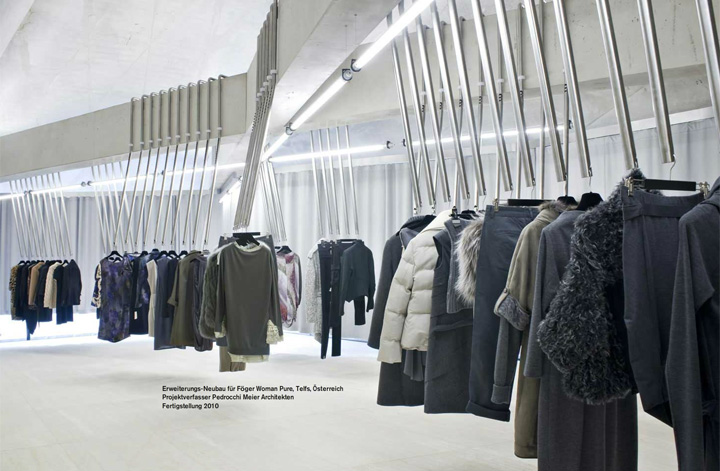 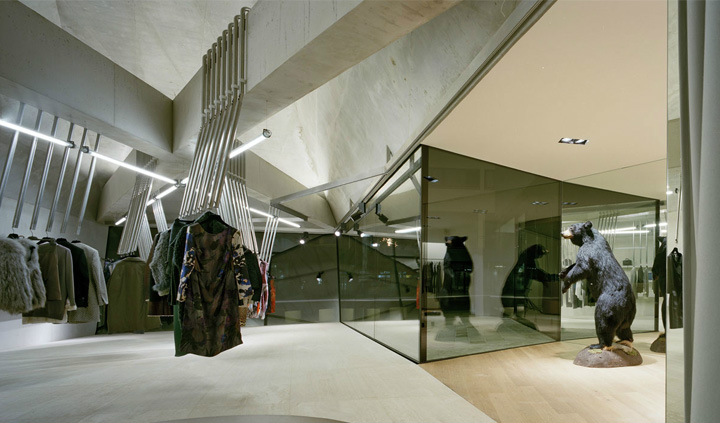 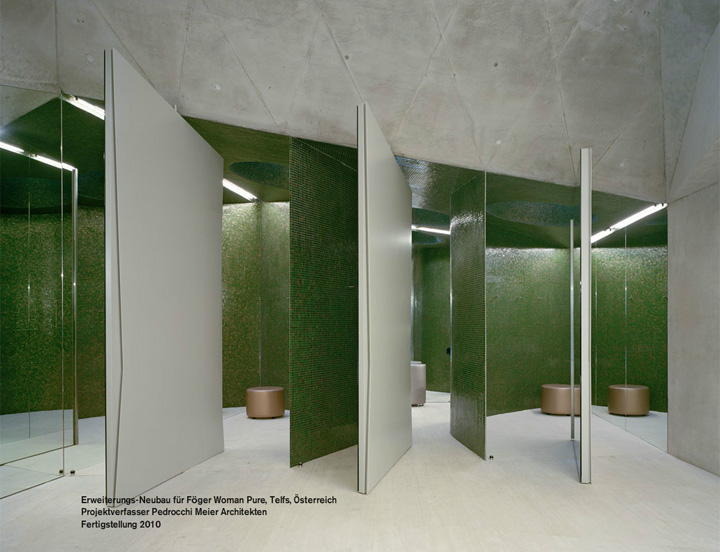 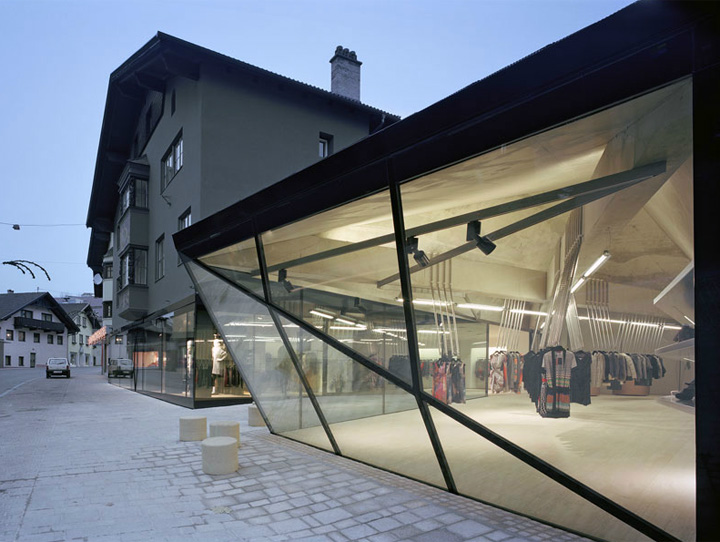 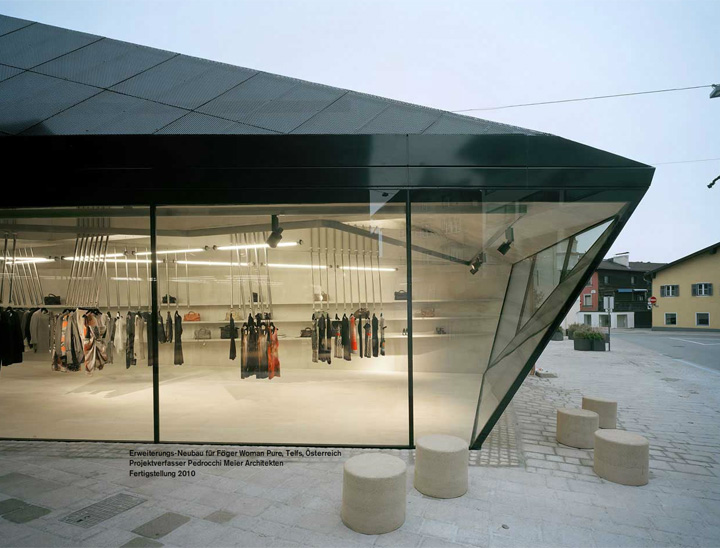 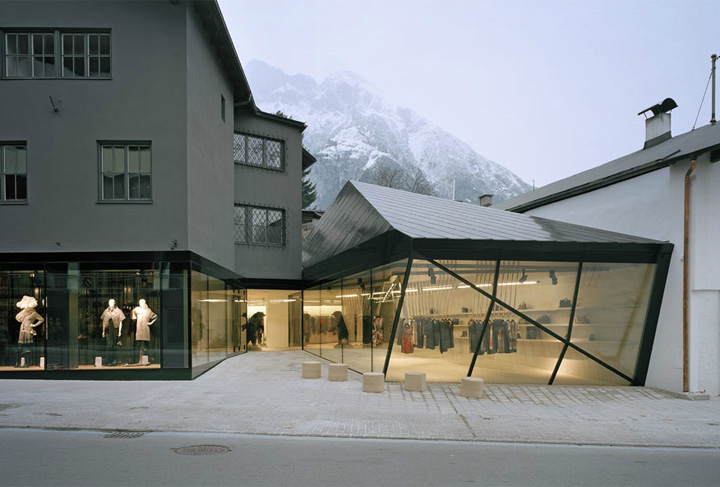 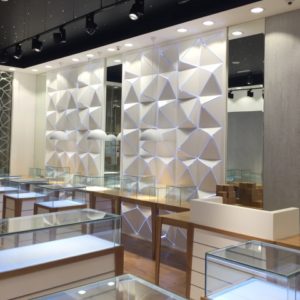 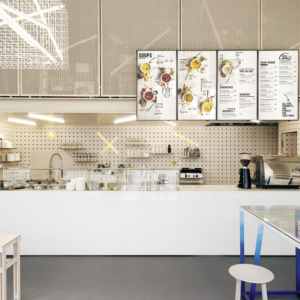 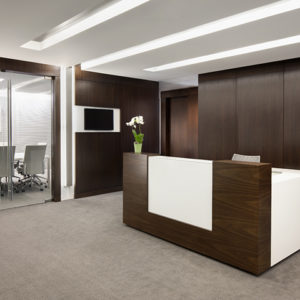