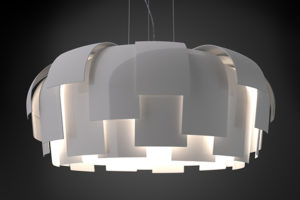 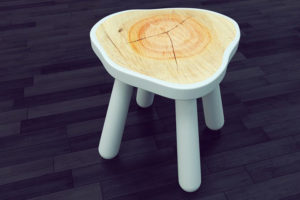 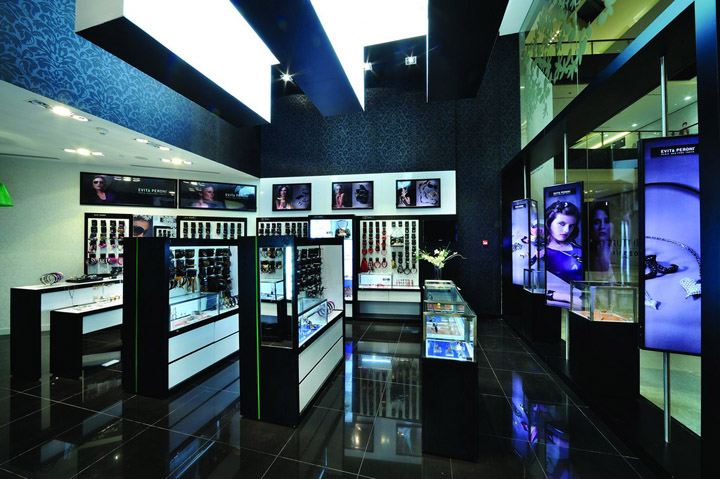 SHH have created a new retail concept called ‘Lotus’ for Danish fashion and accessories brand EVITA PERONI, seen here at the brand new Dubai Mall. EVITA PERONI® is an independent, fashion accessories retail brand, created and owned by the Deichmann family, who started out in the fashion accessories business in 1963 in Denmark, going on to create the highly successful EVITA PERONI brand for affordable luxury accessories in 1988. EVITA PERONI now has franchisees and distributors for over 300 stores and concessions in over 30 countries worldwide, including outlets in Europe, Asia, the Far East, the Middle East, South Africa, North and South America. The company is known for its high-quality products, which range from fashion jewels and eyewear to hair accessories and handbags, as well as for its specialised in-store style consultants, who show customers how to put together looks and use the products, with the strapline ‘change your look as quickly as your mood’.. EVITA PERONI appointed SHH with a brief to design an environment and display systems for the products that would reflect the quality of the merchandise itself and would be flexible enough to be applicable internationally in a range of different-sized stores and concessions. SHH developed a slick, glamorous and highly flexible kit of parts for EVITA PERONI, which can be adapted to any size store. Matt, glossy and textured black and white elements give the environment a highly chic monochrome look, offset with a strong feature green element, taken from the logo and used sparingly throughout. Large-scale lifestyle and product graphics add drama and allow for seasonal variation. The new design elements simplify the treatment of the stores and reduce the number of parts in the display systems, whilst at the same time bringing about a more prestigious profile for the retailer within the luxury market. The pictured Dubai flagship store is 48 sq m with a spectacular 6m-high glazed frontage opening onto the mall. The EVITA PERONI logo has been applied to the fascia in a stainless steel outline with internally-illuminated opal and green acrylic fronts. Above the logo, a mirrored-backed film with a bespoke floral pattern, devised by SHH exclusively for EVITA PERONI, has been used across the storefront to create visual interest and is also used on mirrors internally, as well linking with the feature wallpaper used (Tektura papers with tone on tone raised patterns). The new store window display system is made up of three hanging lightboxes, each of which has three individual sides so that the display can be changed easily with minimum effort, to keep the visual merchandising fresh. The instore display units take the form of individual units, gondolas, wall bays and feature wall bays. Each unit is broken down so that there is an area for feature luxury and high fashion items as well as areas for more densely-merchandised products. The black timber and high gloss white glazing treatment also features, in some instances, a thin inset green line, referencing the logo. The flooring for this particular store is black (where other stores use cream) to increase impact and contrast. Feature pendant lights in a strong green reference the green ‘A’ of the EVITA PERONI logo. 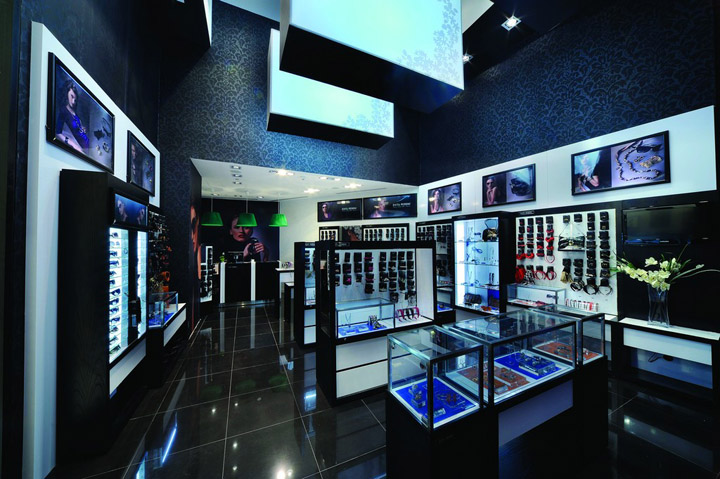 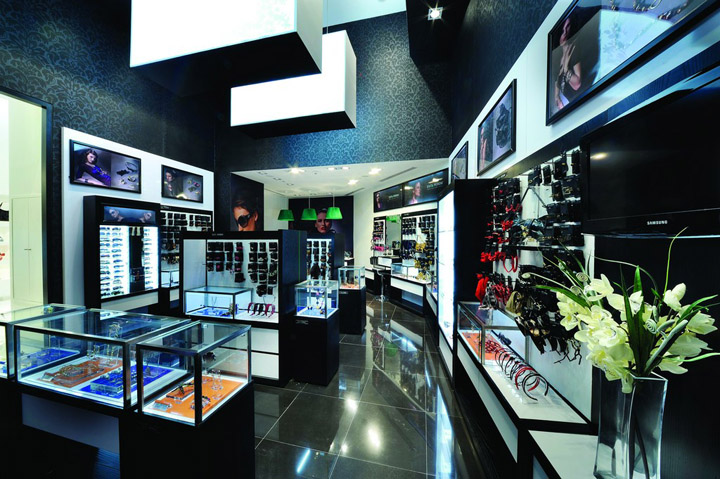 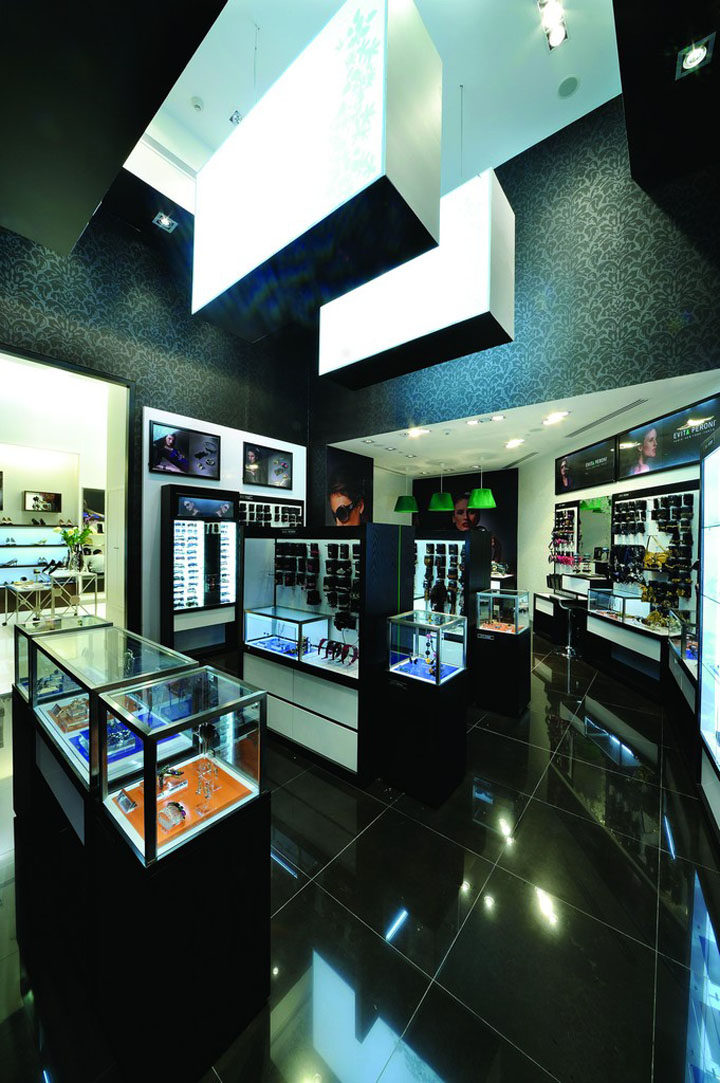 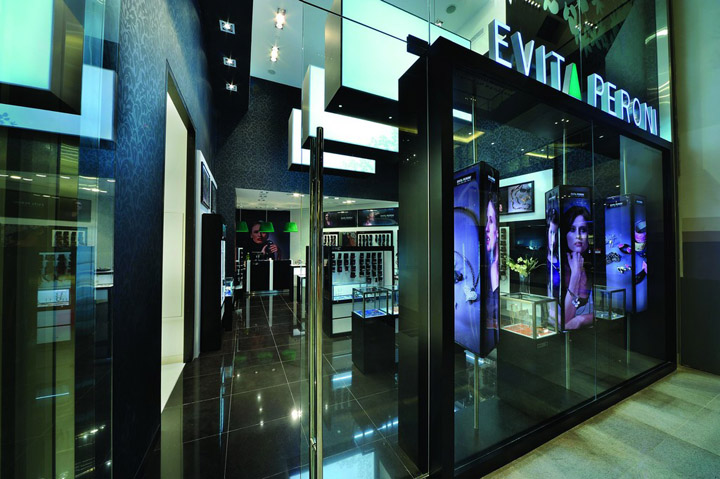 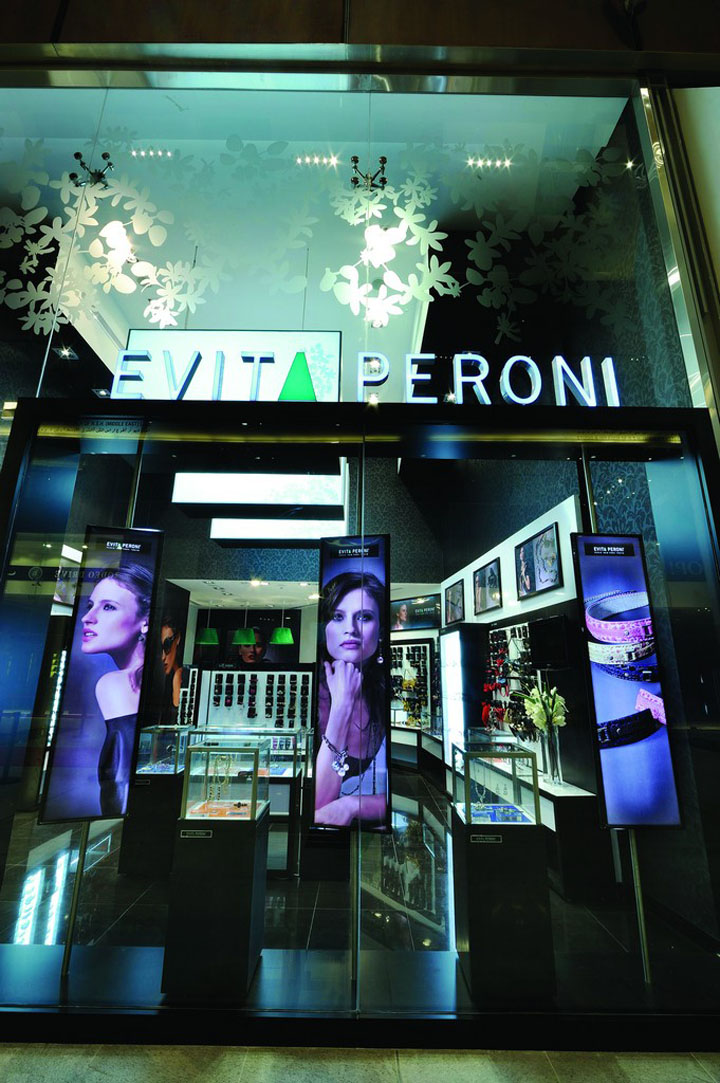 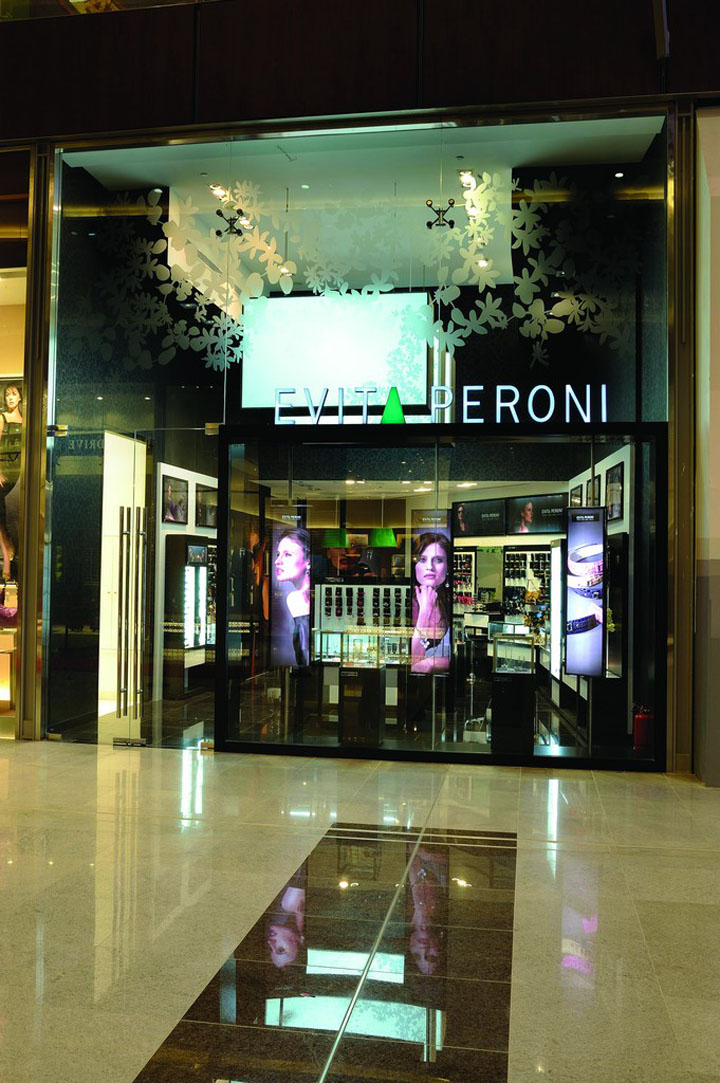 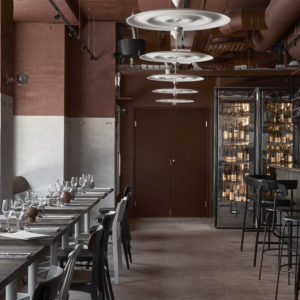 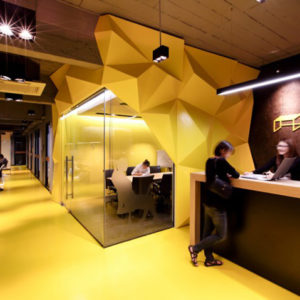 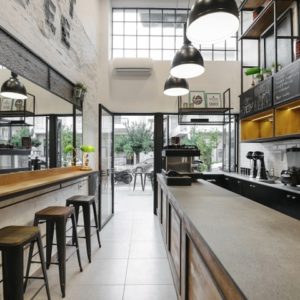 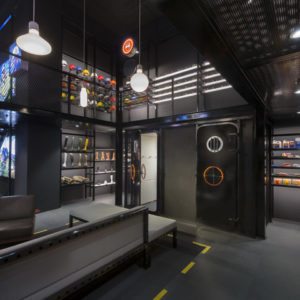