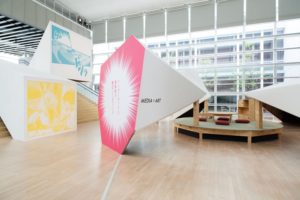 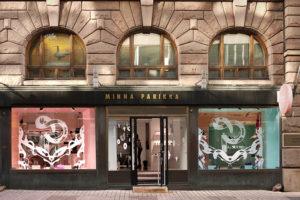 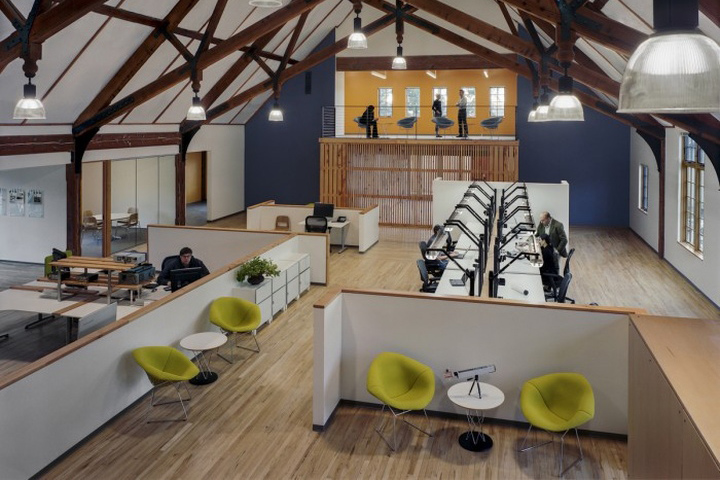 Vacant for 10 years, the structure was a community eyesore with broken windows, leaking roof and rotting siding. The renovation restores the original lodge-like quality of the space and creates an open flexible work environment for CID Bio-Science — a company that designs and manufactures portable, precision instruments for agricultural and environmental research. This adaptive reuse develops 12,000 SF of office/production space, while saving an important piece of Camas, Washington’s history. The American Legion Hall Bennett-Barnett Post #27 was constructed in 1934 by volunteer labor with wood purchased from the local saw mill. The two-story structure was designed by regionally famed architect D.W. Hilborn and featured a prominent ballroom used for dances and legion events. The lodge aesthetic was a key asset the design team worked to preserve, showcasing the expansive wooden trusses that provide volume and grandeur to the space. New interventions took cues from simple, industrial design influences, with careful attention to marrying the modern and historic elements. The conference rooms, entry and stairs are on the perimeter, respecting the original character of the hall and preserving its rustic design and detailing. Despite the loss of original windows, doors and the fireplace through years of neglect, the team succeeded in listing the building on the local registry for historic places. The design approach sought to marry influences from mid-century lodges with manufacturing warehouses as well as incorporating the verdant and water-rich landscape of the Pacific Northwest. New double-paned, aluminum-clad Douglas fir windows reflect the historical character of the building and significantly improve energy performance. The facility employs low-flow water fixtures and uses low-VOC paints and finishes. As much of the original materials were re-used as possible, including light fixtures, wood columns and beams, and other structural features. A bioswale was added on three sides of the building to remove silt and pollution from surface runoff water. Native species were selected to blend with the local environment and eliminate the need for long term irrigation. The company is a strong believer in Lean Design, continually re-evaluating its production and office environment to reduce waste and loss of time. In the open work environment, CID Bio-Science wanted to dedicate each workstation to the assembly of one of its instruments for efficiency and quality assurance. The design team supported this by integrating storage space for personal belongings and developing interaction areas near the workstations to encourage collaboration. 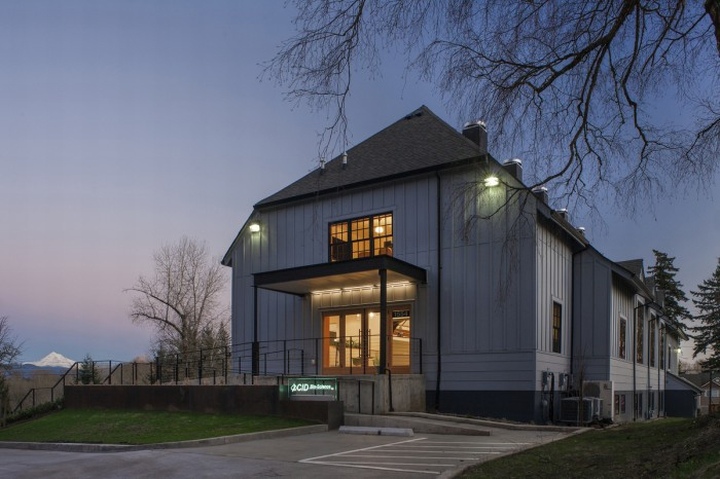 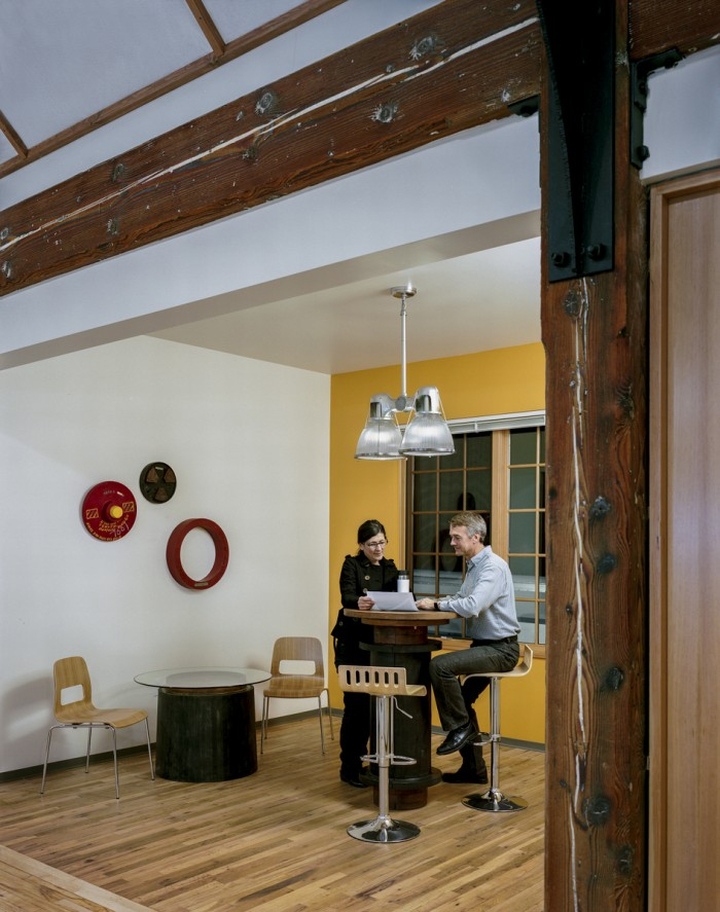 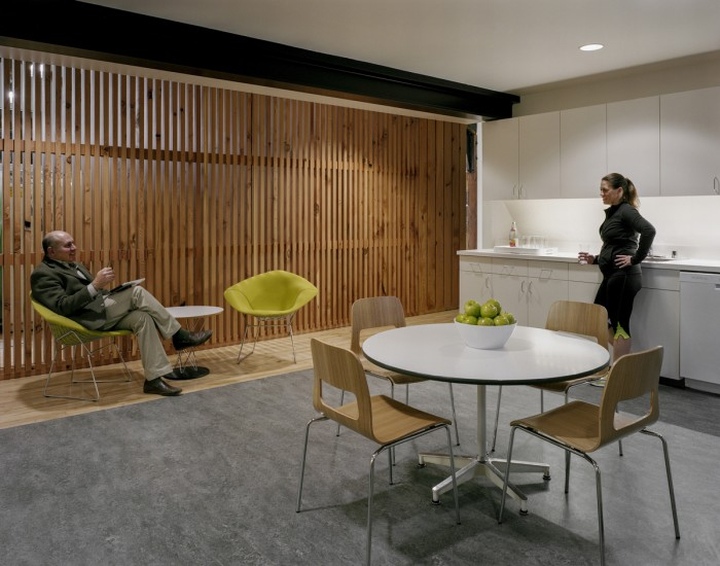 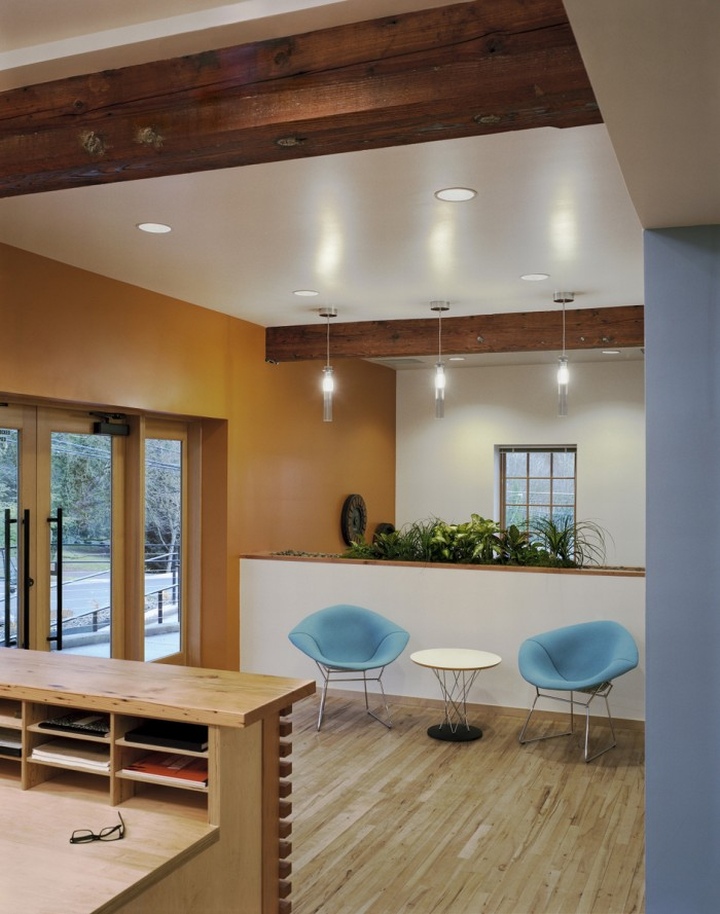 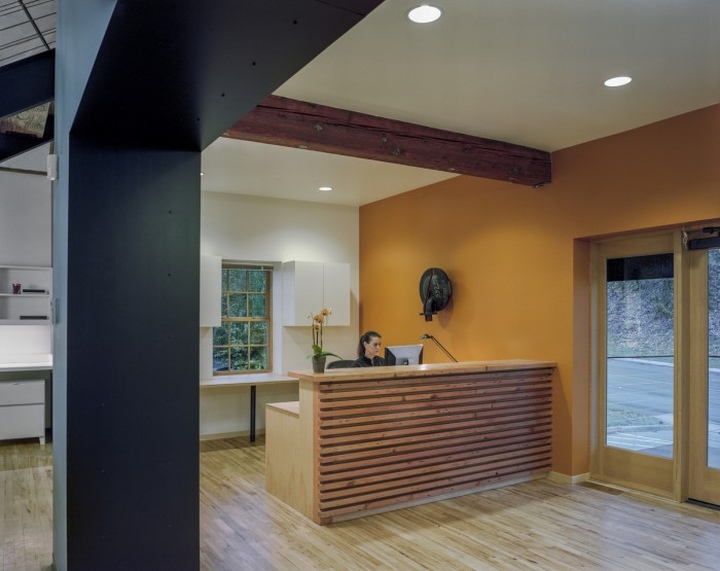 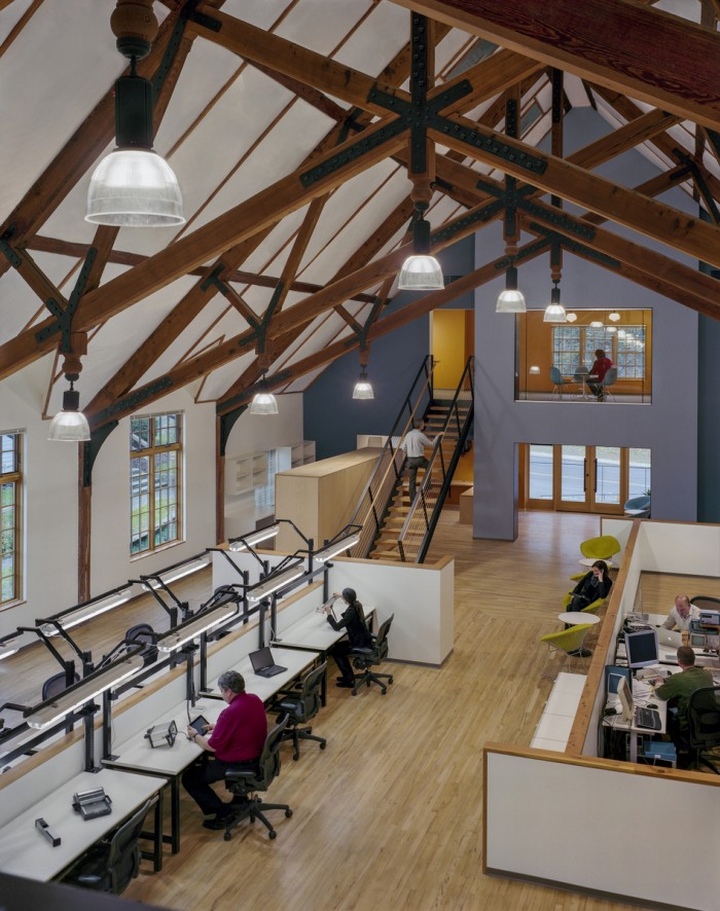 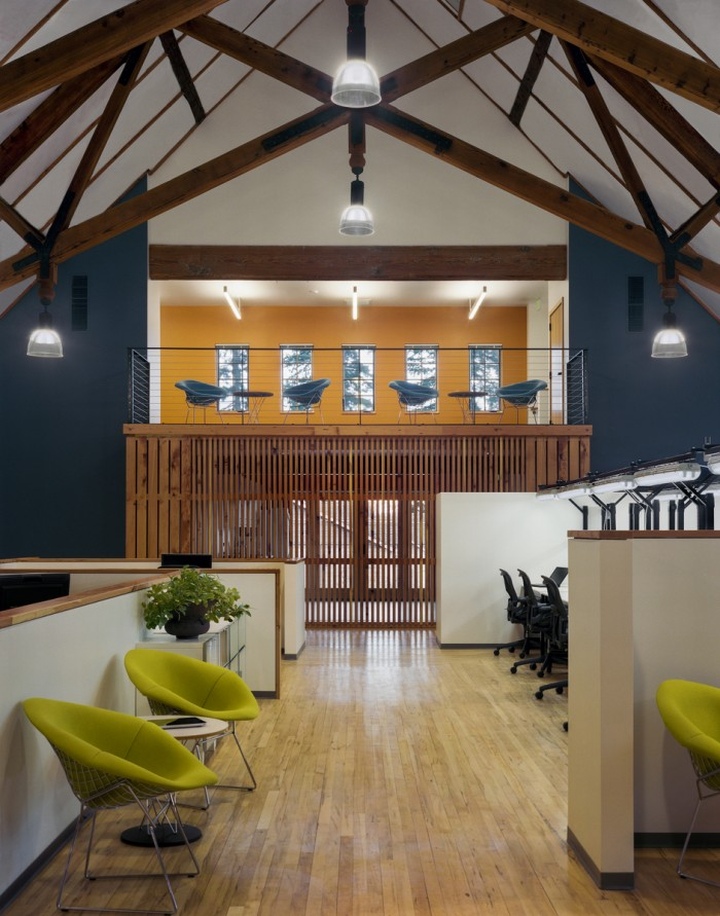 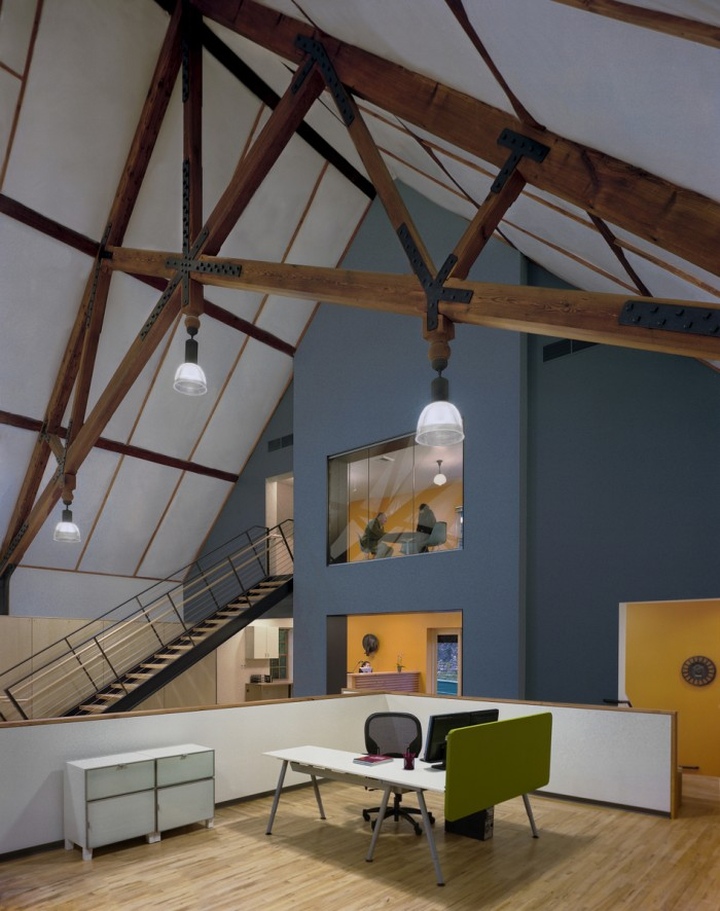 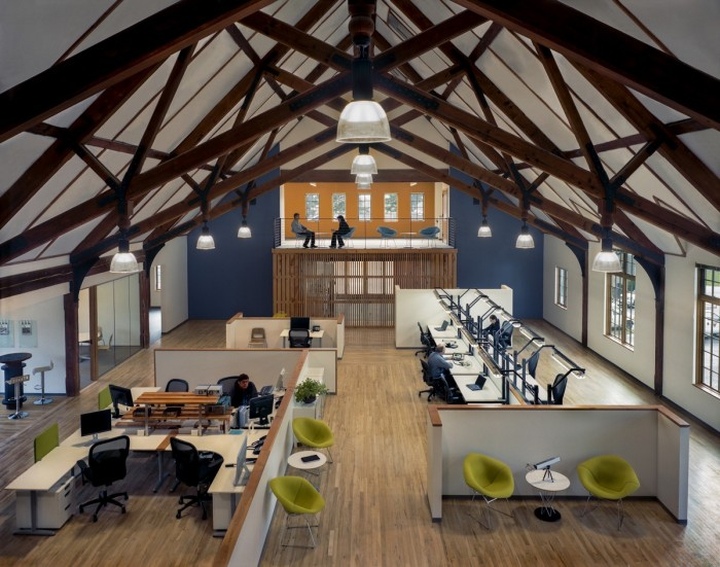 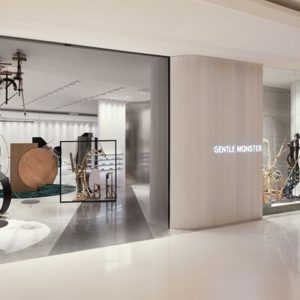 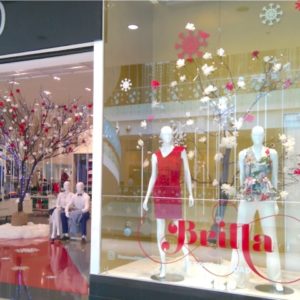 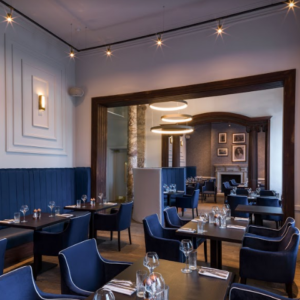 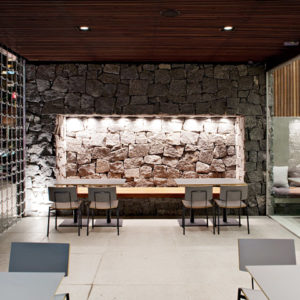