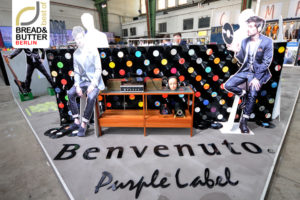 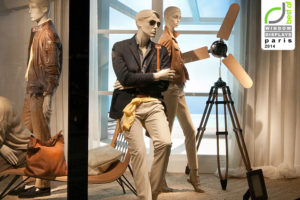 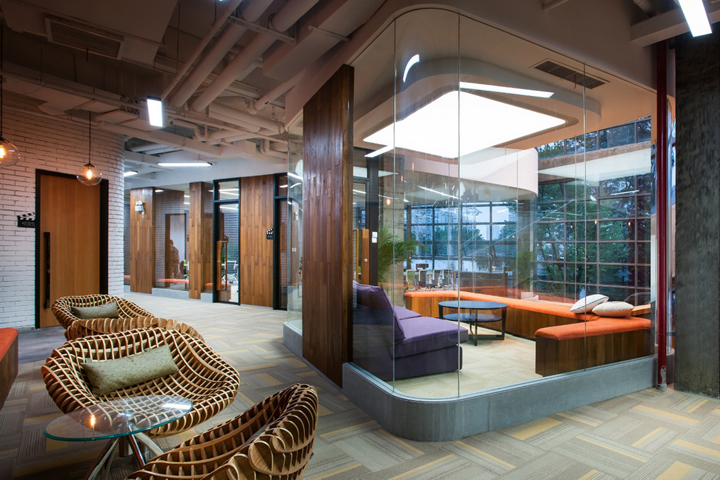 M Moser Associates has recently completed a new headquarters design in Guangzhou for Chinese internet giant Tencent. Young and fast-expanding Tencent – originator of China’s exceedingly popular WeChat application – envisioned its new Guanzhou campus as a crucial step in defining the company’s identity. With this in mind, the firm’s selection of six dilapidated ex-factory buildings in a former textile industry zone may have seemed an eccentric starting point. Upon closer examination, however, the choice had much to commend it. Developing the design: Using historical architecture to connect yesterday to today. Collectively, the six buildings selected by Tencent offered approximately 9,914 sq-m of floor area. Four of the buildings would be used as workspaces, and common amenities such as meeting rooms and the staff canteen would be accommodated in the remaining two. The disposition of the buildings themselves – arranged rather haphazardly within the Creative Park – posed a challenge to Tencent and the M Moser team. “Somehow, all the buildings had to be connected together and have a distinct, coherent identity,” says Ramesh Subramaniam. “There was also a need for very clear wayfinding through the campus, because there are quite a lot of other buildings there which don’t belong to Tencent.” At the same time, both the client and project team recognised the key importance of retaining the buildings’ original appearance – and their organic connection with the site’s history – as intact as possible. Based at M Moser Kuala Lumpur, Ramesh collaborated closely with the client and the project team in Guangzhou to evolve the project’s conceptual design. Their solution to the need for connection and identity within the campus was a network of open-sided bridges linking four of the six project buildings together. “The bridges not only connect the buildings physically and make four workspaces into one, but also link them together conceptually. They create a distinct ‘campus within a campus’ for Tencent, without altering the building’s existing historical features and characteristics,” Ramesh observes. Ensuring that the workplace was as healthy as it is stimulating was another priority for the M Moser project team. As well as complementing the buildings’ industrial architecture, the simple palette of materials used for the office’s interior were largely natural, locally sourced, and easily renewed or recycled.“The simple, natural materials used in the spaces are not only sustainable, but are extremely resistant to wear-and-tear, so maintenance costs are reduced in the long run,” says Tencent’s project manager. Natural, low-VOC finishes throughout the space (even the wood floor is polished with benign carborundum wax, and varnishes used were of the waterborne epoxy resin type) help keep the interior atmosphere clean and chemical-free. “The feedback from our people has been extremely positive – about the healthy environment as well as the general comfort and function of the new campus,” says Tencent’s project manager. “This new campus offers our staff new possibilities for how they do their work. It breaks all the old expectations of what a working environment can be” A workspace designed for circulation, connectivity, and creativity. Innovation is central to Tencent’s business – and the workspaces in its Creative Park campus were designed to stimulate it by encouraging interaction and collaboration between staff members and teams. To this end, the wide-open spaces and regular floor plates of the original factory buildings were to the design team’s advantage. What was open before largely remains open now, with aisles and green walls used to demarcate different functional areas rather than opaque enclosures. Staff members are free to roam through the space, making informal connections with colleagues, engaging in impromptu discussions at the break-out zones located near their workstations. Features like writing boards and washable walls scattered throughout the workspace further support the creative instincts of staff members. A gym area in the service building and several outdoor balconies provide additional venues for a refreshing change of scenery and relaxation. “The aim was to create an interesting and comfortable environment that would encourage spontaneity,” says Grace. “It makes collaboration a natural and instinctive act, rather than a matter of scheduling a meeting.” Even the sole area of the office that does feature enclosed spaces – the meeting suite – offers a measure of flexibility and fluid movement. The glass walls of the meeting rooms are moveable, enabling spaces to be enlarged or reduced as needs require. Opening up all the meeting rooms creates a single large space suitable for ‘town hall’ gatherings of the entire staff. 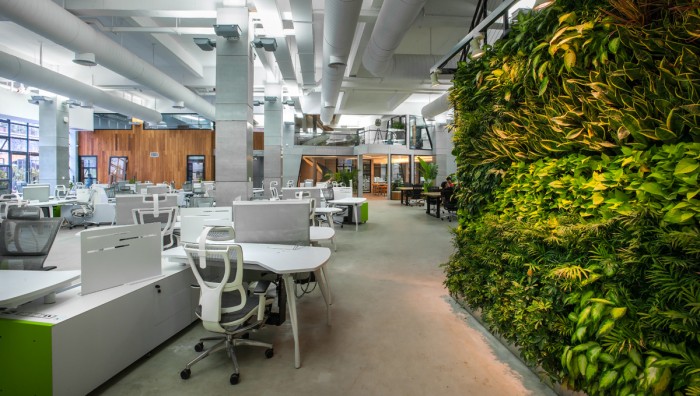 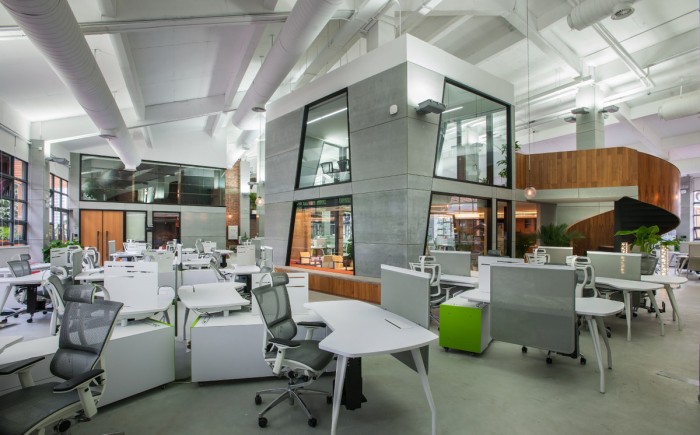 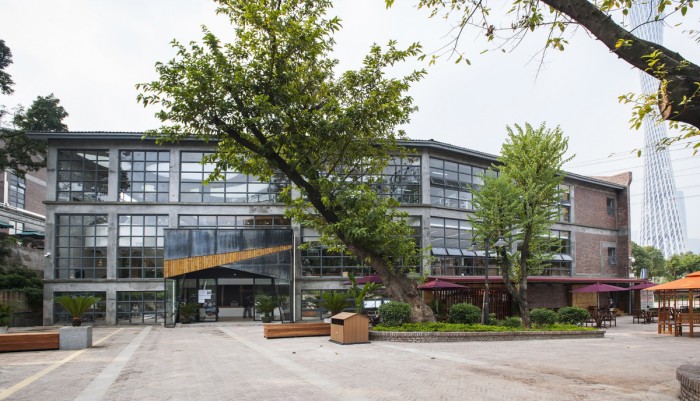 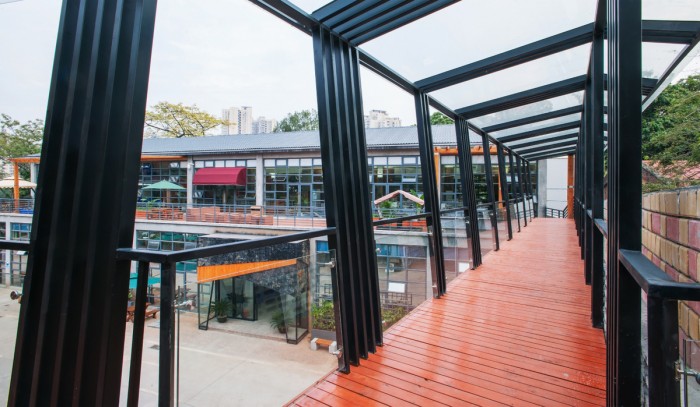 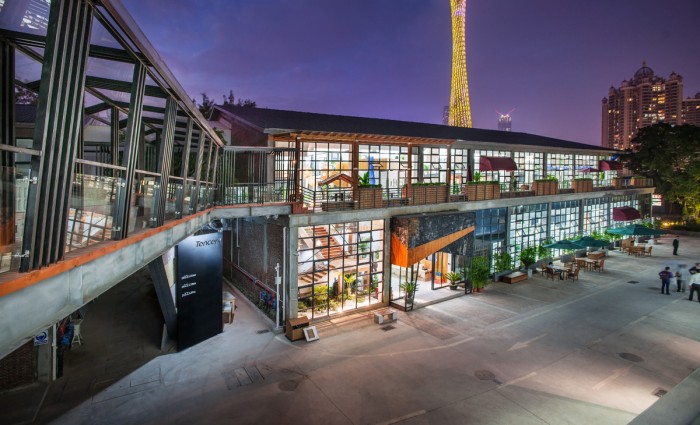 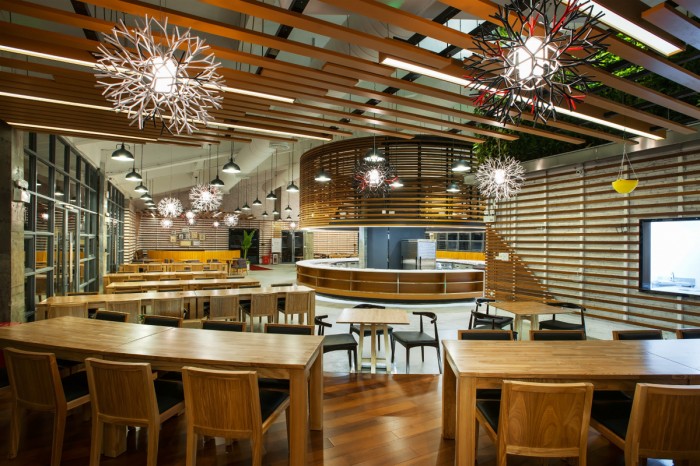 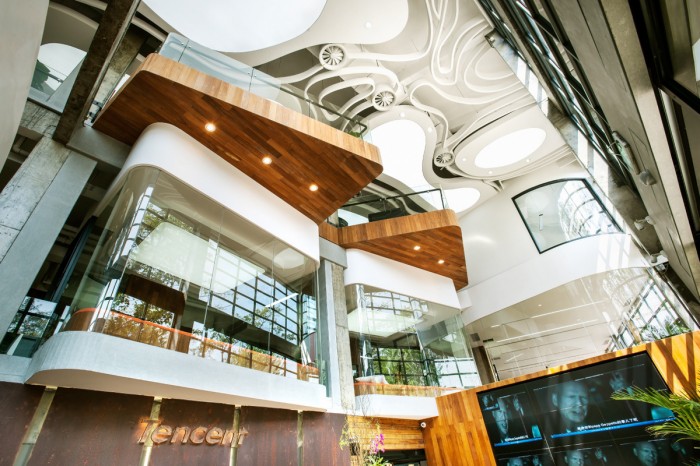 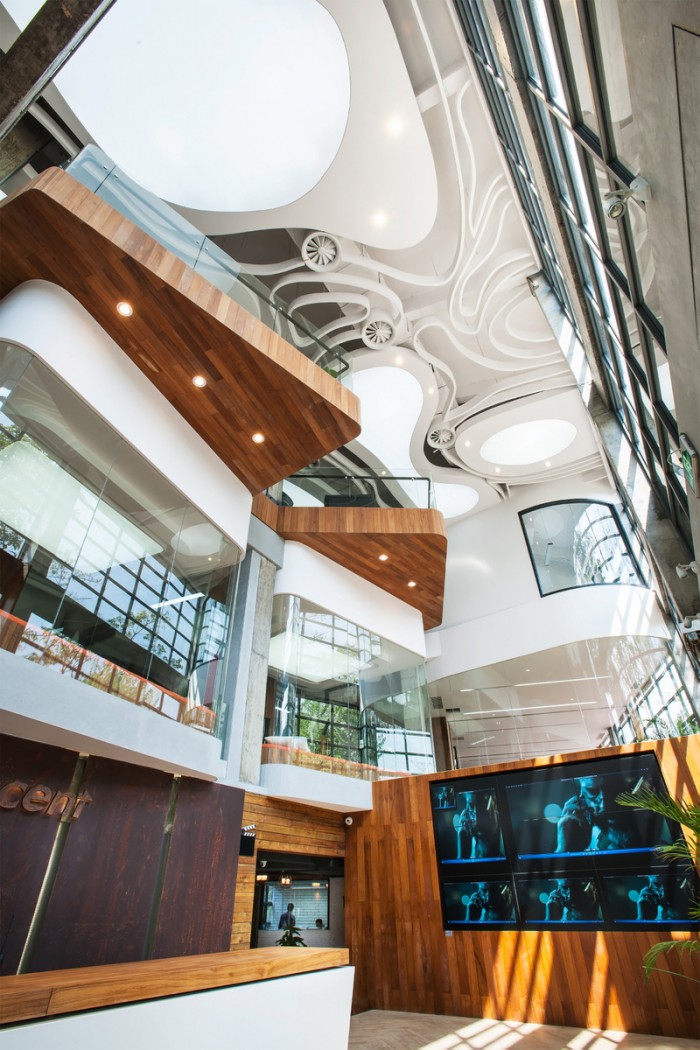 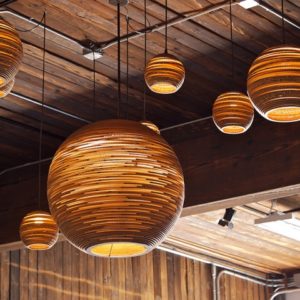 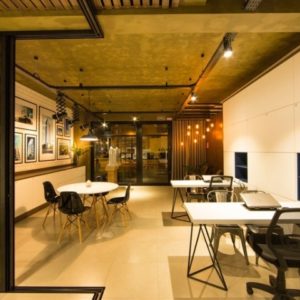 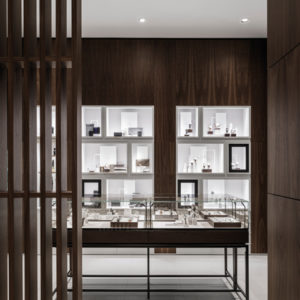 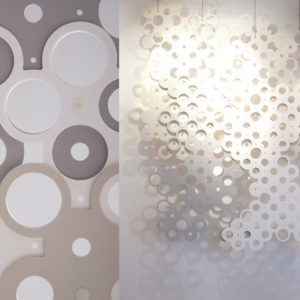