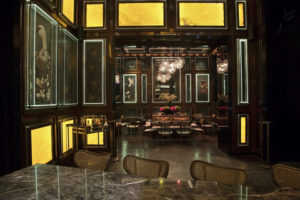 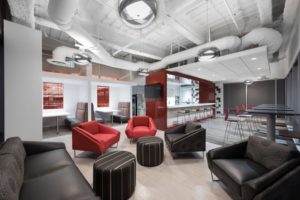 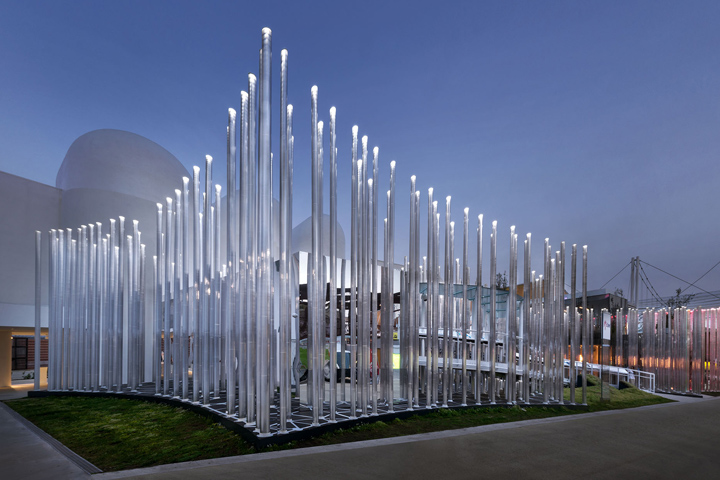 The Concept
In designing the ENEL Pavilion for Expo 2015, Piuarch wanted to express the concept of “energy sharing” in an architectural theme. Not through a “building-container,” but rather with the creation of a virtual volume: a place, generated by a grid onto which 650 polycarbonate vectors are grafted. The arrangement of these constantly changing, illuminated vertical elements defines the volume that encompasses within itself a series of other volumes and green courtyards. The Structure of the Smart Grid
The pavilion occupies an area of 900 sq.m., overlooking the Decumano (main east-west road). The initial matrix of the project is the intelligent network that ENEL created to power the EXPO site. The basic element of the space – both conceptual and structural – is the grid which can be seen on the ground. It is precisely this grid which, by means of a network created with metallic elements carrying the distribution of electricity and the flow of data, conveys the idea of energy sharing. This network is spread across the floor and gives the system a wavy pattern. Grafted onto the network are vectors that represent the system’s nerve endings. Made from clear polycarbonate tubes with a diameter of 150 mm and a height varying between 5.3 and 7 meters, the vectors create a virtual forest, illuminated by a series of LED lights placed on the grid. Interaction and Perception
The interaction between the visitor and the environment is a fundamental part of the concept. The perception that the visitors will have of the virtual volume changes continuously in relation to the point of observation and the movement of people: the alignment, disalignment and overlapping of the vertical elements produces a continuous changing of the visitors’ perception of the space. The kinetic effect is accentuated by the vibration produced by the variations of the light. The project also proposes a playful aspect that allows the visitor to penetrate freely into the “forest” and to interact with the vectors through unexpected situations of light and sound. Green plays an especially important role in enhancing the experience; in both the three densely wooded courtyards and the areas surrounding the pavilion a great variety of plants and herbs are used that belong to the “Mediterranean garden.” Full of colorful, lingering blossoms, these are designed to adapt to the changing seasons, expressing their message for the entire duration of the Expo. The Visit Experience
An elevated walkway is the dynamic experiential path that leads visitors through both the virtual forest and the natural forest. The lush green courtyards make the topic of sustainability the beating heart of the system. The wooden walkway is covered by a printed glass roof that protects against rain and creates a shaded space. A nebulizer system adds to the walk and soft music creates an evocative atmosphere. An interactive informational strip running along the entire path leads visitors into the virtual forest. The Control Room
The Control Room is the operational and nerve center of the entire ecosystem. This mirrored environment is inside the virtual forest, and films and interactive elements allows the visitor to understand how the entire intelligent system works. This is complemented by a stage machine composed by kinetic mirrored elements that echo the pattern of the network even in the control room. A second glassed area has a showroom and entertainment areas that have the virtual forest on one side and a terrace on the other. The glass surfaces are treated to create varying degrees of transparency and reflection, producing a feeling of lightness. The system is powered by energy obtained from photovoltaic panels installed on the pavilion. 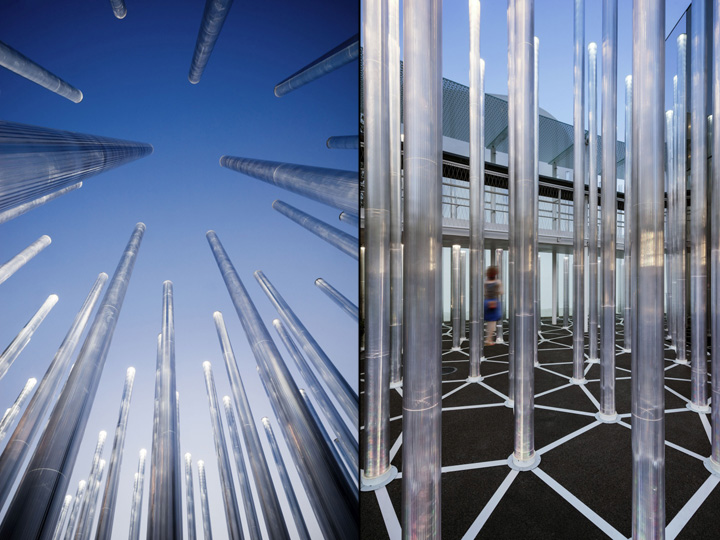 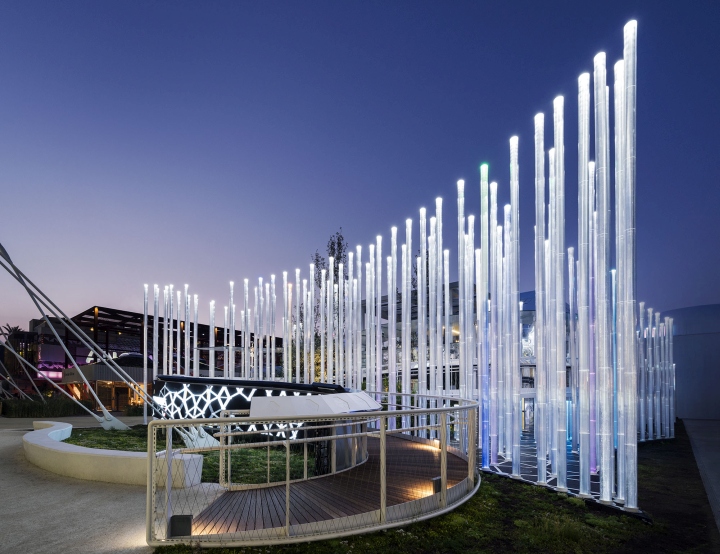 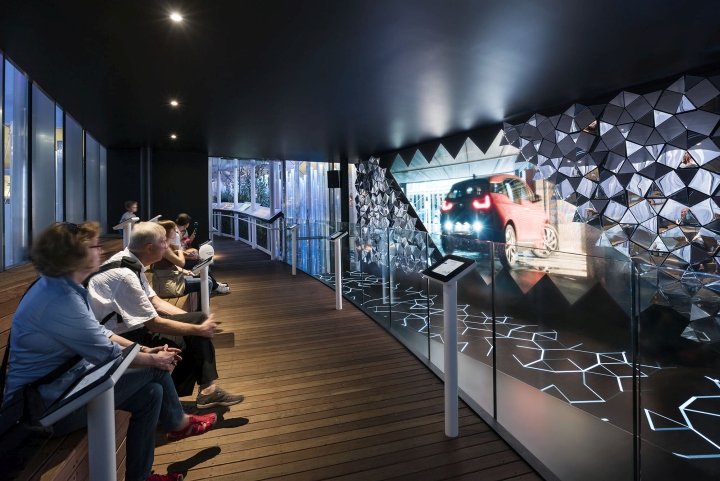 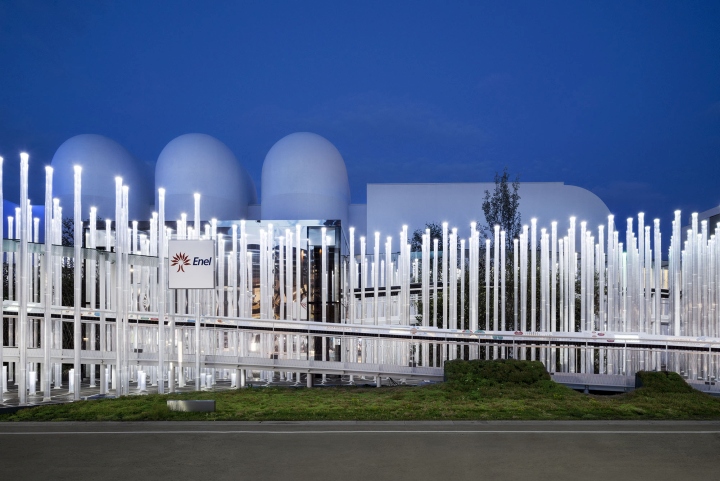 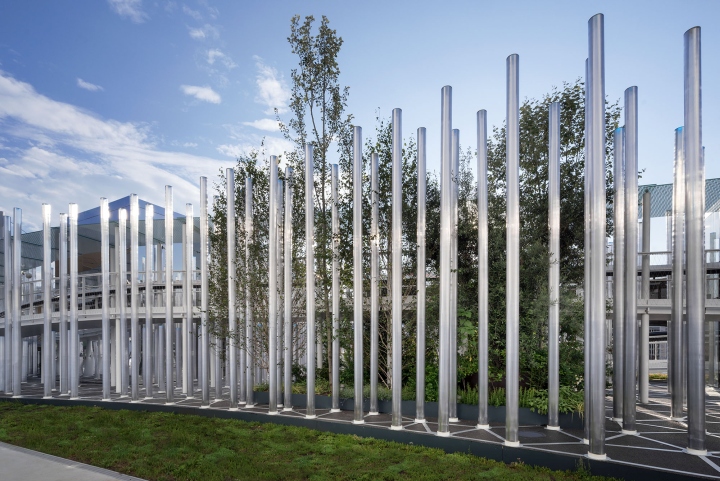 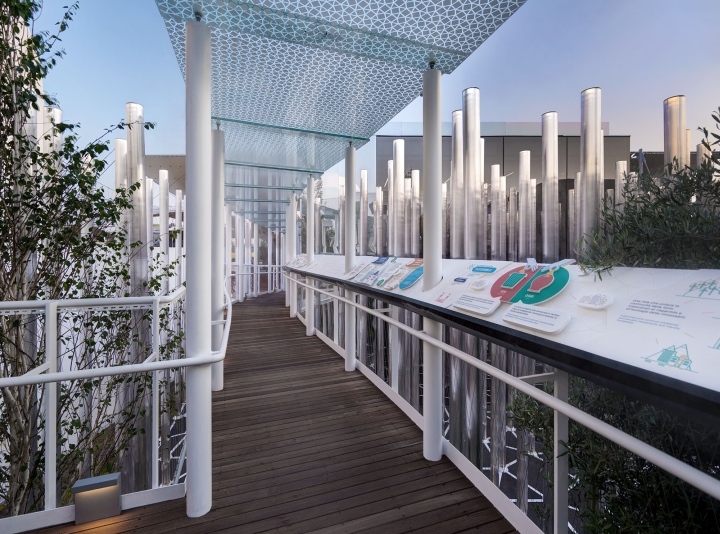 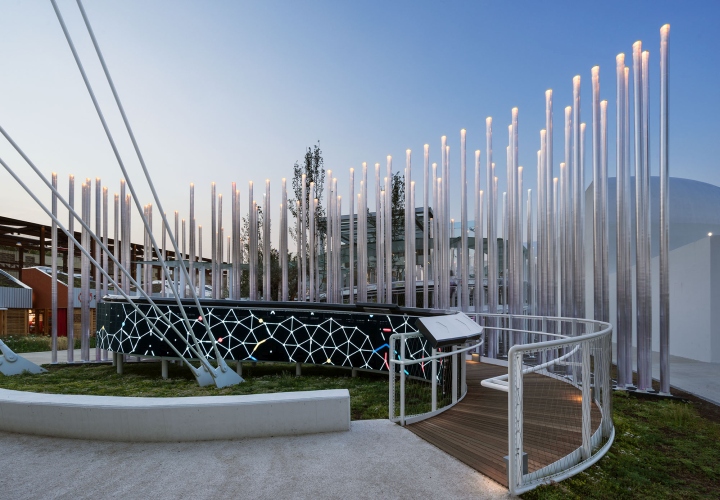 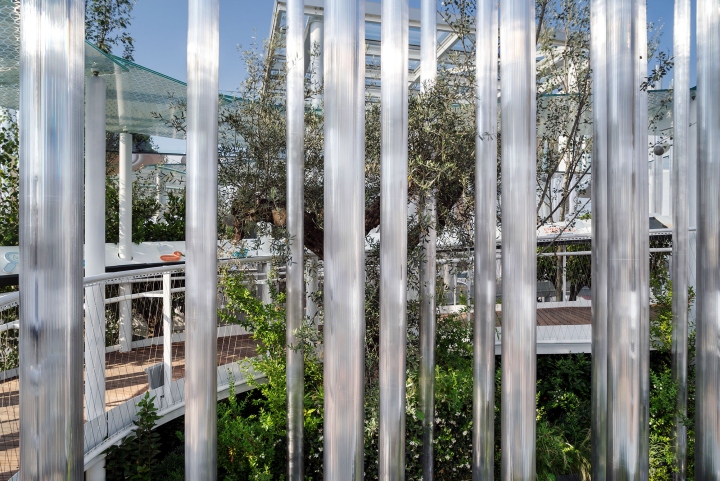 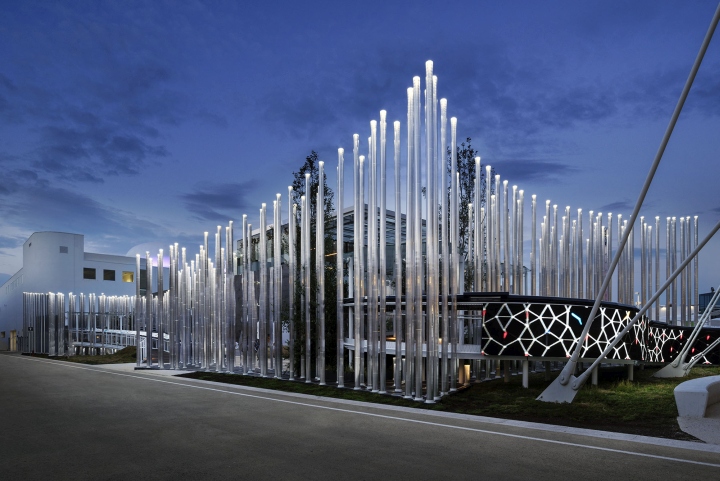 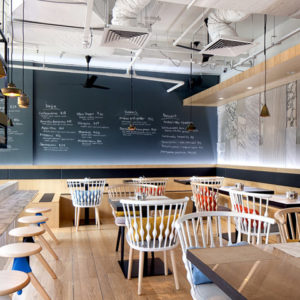 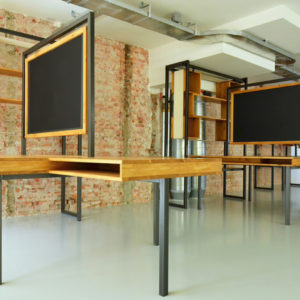 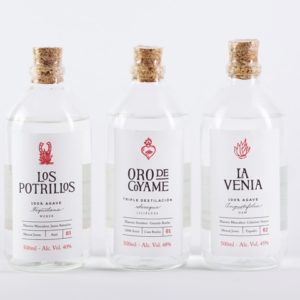