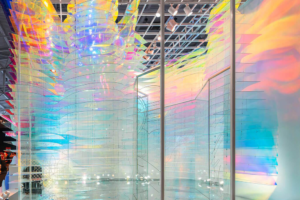 Japan’s Sakura or cherry blossom season is such a big deal for locals, it has also become an emblematic part of Japanese culture and all it stands for. The revered phenomenon has served as inspiration for a newly opened Kaiseki restaurant in Shanghai‘s Xujiahui district, situated just a stone’s throw away from the greens of the popular eponymous park. Called Omakase, it’s situated in an early 20th century building, and features an interior design by acclaimed architect Sun Tianwen of local practice Shanghai Hip-Pop. Tianwen has studied Japanese culture, and has pulled out all the stops to create an exceptional setting that does justice to the sophisticated dining venue. The design concept of ‘dew-covered Sakura leaves’ is best reflected by the plentiful glass panels and partitions that have a virtual-real synthesis and crystal-clear decorative effects. The floor comprises of matching backlit glass panels, and add to the sense of being immersed in a floral fantasy.

Omakase‘s ground floor has an open plan lay-out, featuring merely an elongated sushi bar that lines the wall on one side and situated at the back, there’s the Tatami Room, a private dining space. The abundance of pink is paired with a gold hue, poetically representing sunlight, and is captured by the walls of the private dining space and the sushi bar. A staircase leads to the second floor where guests are seated in private rooms only, all divided by similar cherry blossom-infused glass panels. As said, Omakase is an exclusive gourmet restaurant serving meticulously prepared Japanese dishes by specially trained Japanese and Chinese chefs. The culinary perfection of Kaiseki cuisine not only results in meticulously created dishes, but also in the fact that the majority of their ingredients are flown in daily from the Land of the Rising Sun.