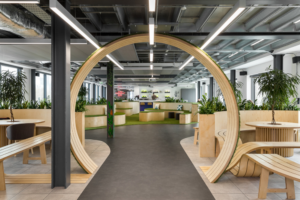 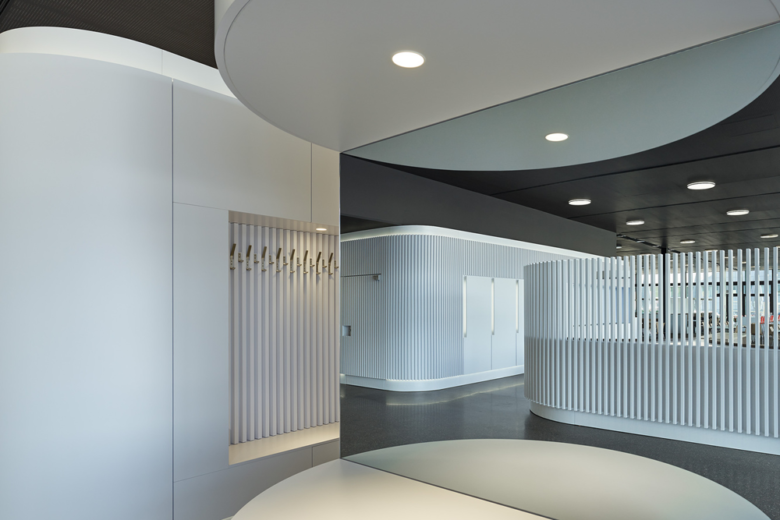 Since the mid-1960s, the corporate headquarters of a huge Swabian company have been located on the Schillerhöhe, a green range of hills on the outskirts of Gerlingen, just ten kilometres outside of Stuttgart. Here, the industrial giant is literally hiding in a forest.

The heterogeneous development, the core of which dates from the 1960s and 1970s, is loosely grouped around a central, green campus, the north side of which is occupied by the broad, one-storey building of the staff restaurant. The building dates from 1968 and is obviously inspired by prestigious hall buildings of the International Style, such as Mies van der Rohe’s Crown Hall in Chicago or his National Gallery in Berlin.

With its storey-high glass façades, the open interior connects on all sides with the surrounding forest and green areas. An intended increase in capacity to 1,300 meals per day, new fire protection regulations, and structural adaptations with regard to accessibility recently made it necessary to redesign the staff restaurant – “while preserving its external appearance”.

The Stuttgart-based office of architects Domenik Schleicher and Michael Ragaller was commissioned with this project. After gutting the building, a new, very dark terrazzo screed was laid and the entire ceiling was painted black. With simple means it was thus possible to intensify the building’s existing connection to the exterior and ultimately to turn the view of the green surroundings into the dominant design element.

The new installations are also subordinate to this: painted white, gently rounded, and precisely executed, there is nothing pretentious or fashionable about them. They are quiet, timeless servants in the best sense of the word and thus also bear witness to the self-image of the world market leader from Swabia.

Depending on the situation, they accommodate a wide variety of functions – from the coat rack, to the food counter, the front cooking area, and the new, centrally located scullery with tray return. Light, wall clocks, menu displays, and payment machines are elegantly integrated into the wall surfaces. The valuable interior fit out is completed by solid furniture. 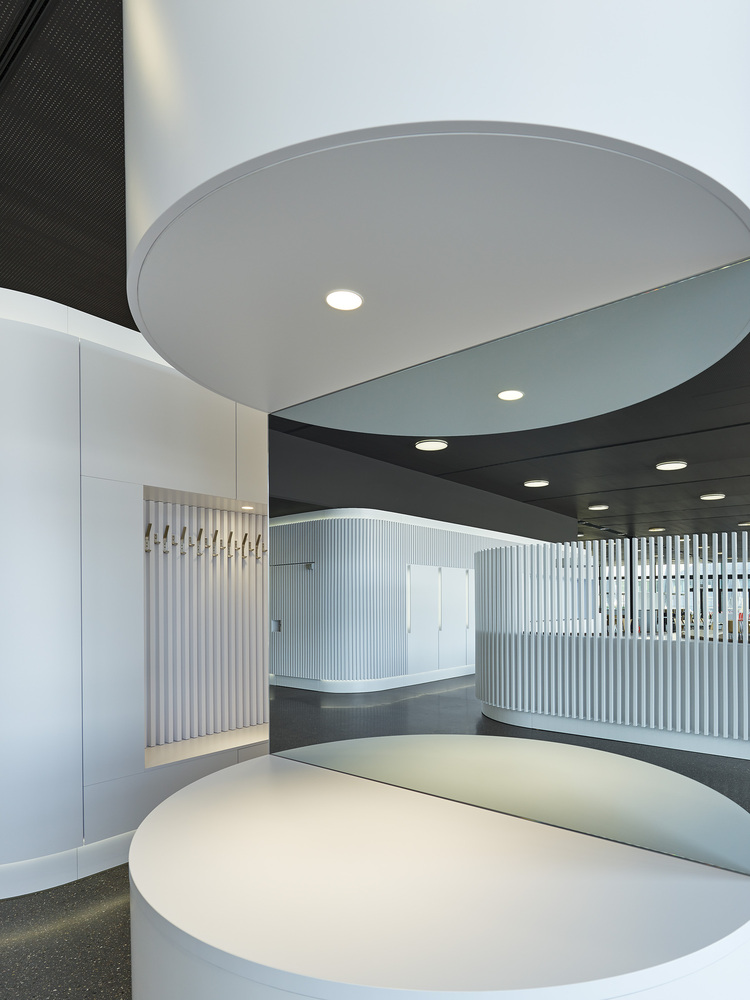 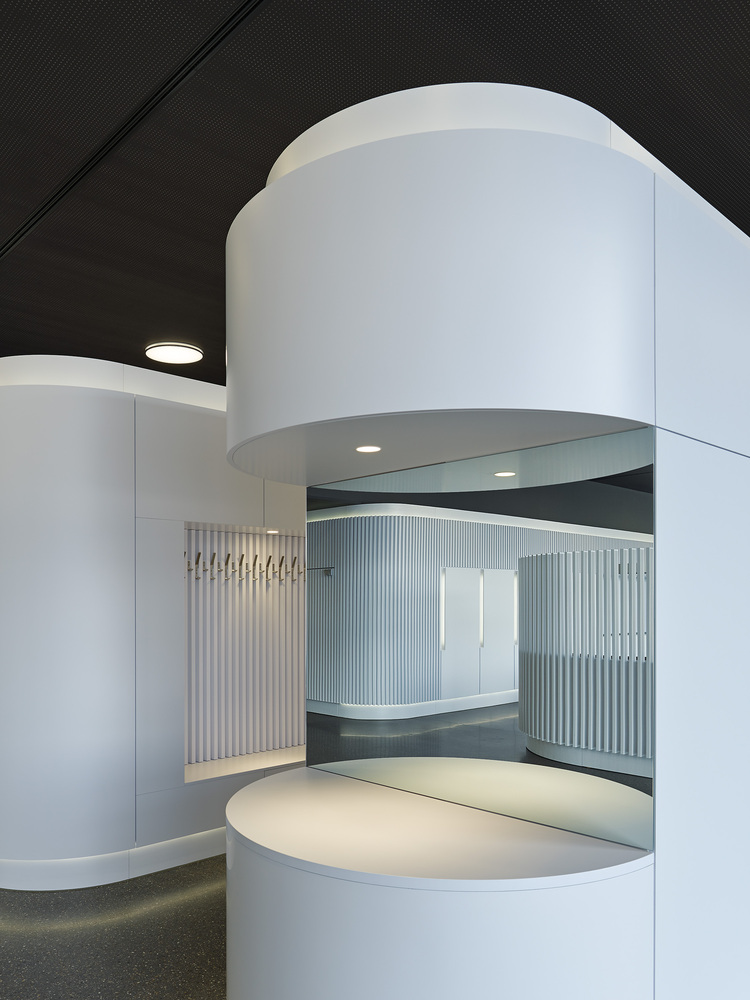 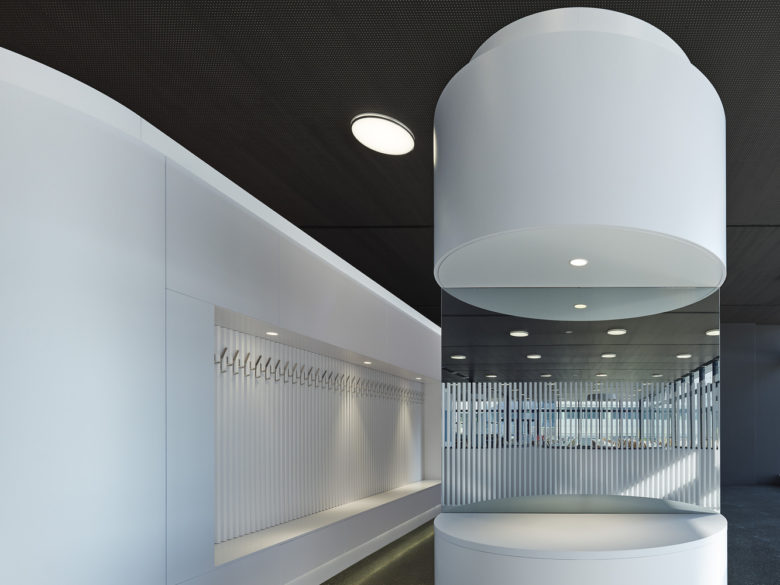 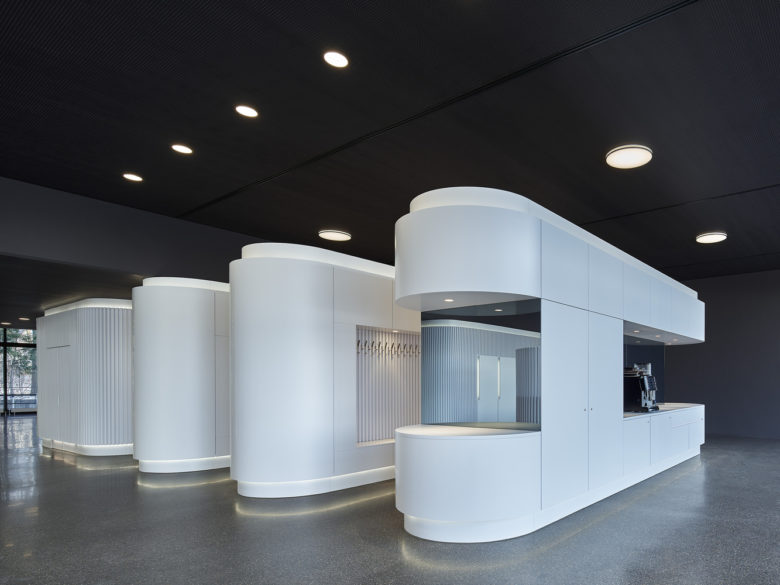 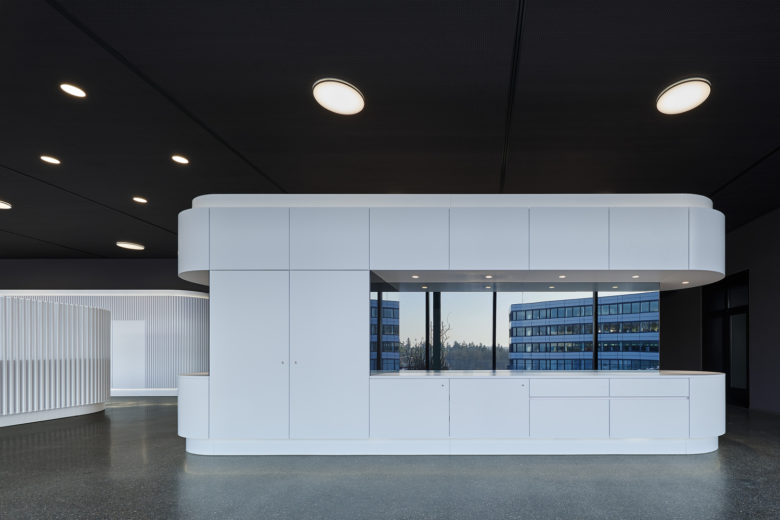 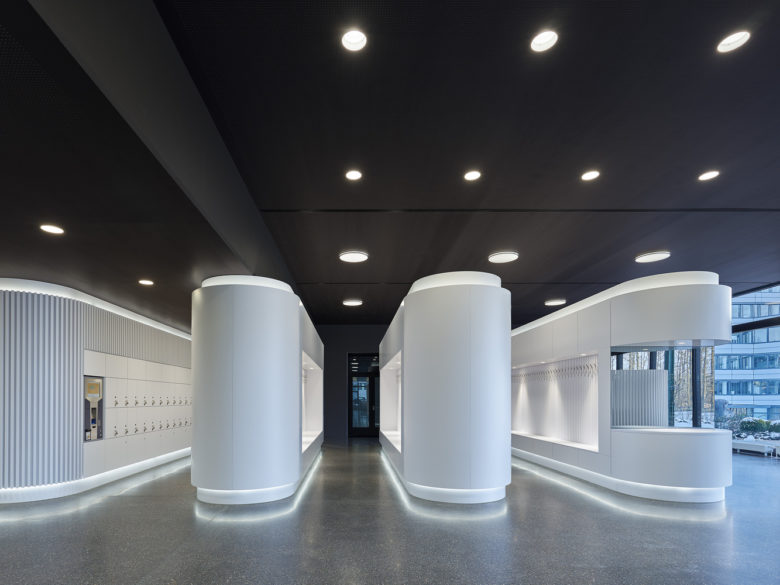 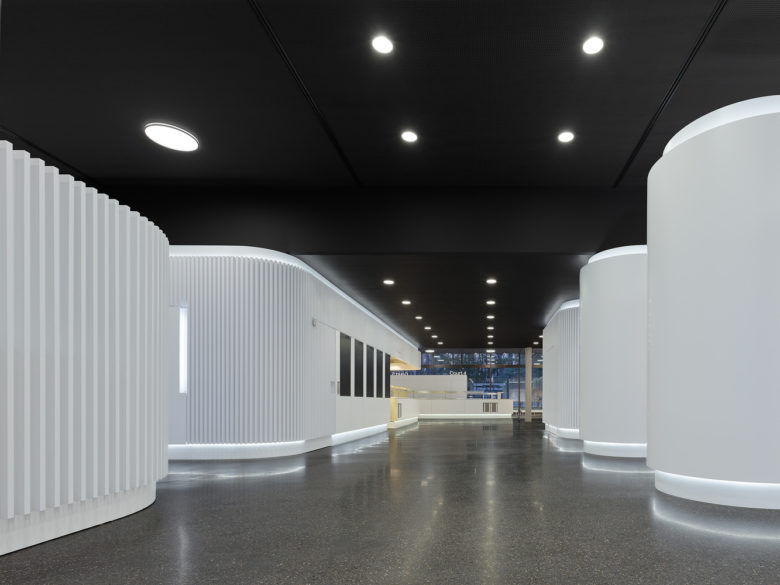 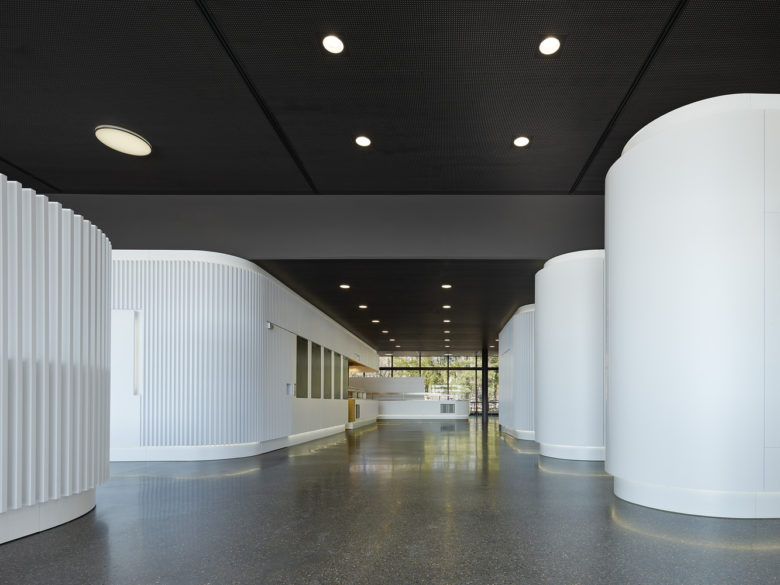 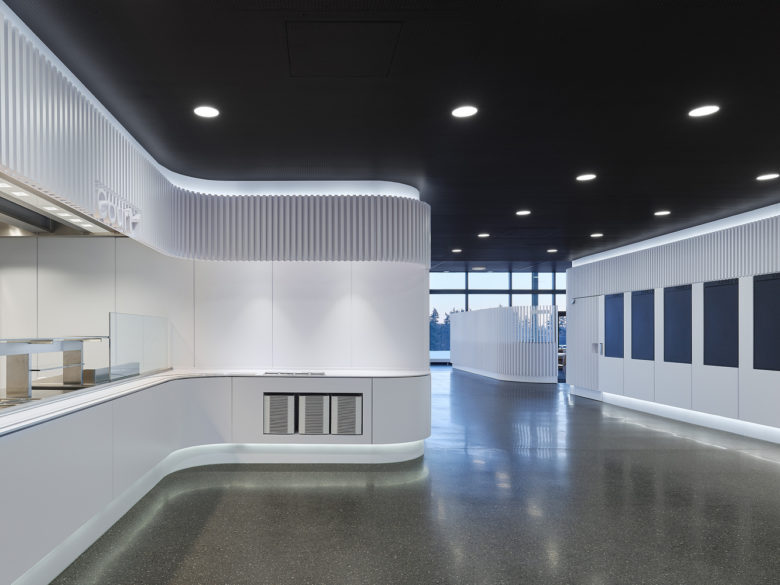 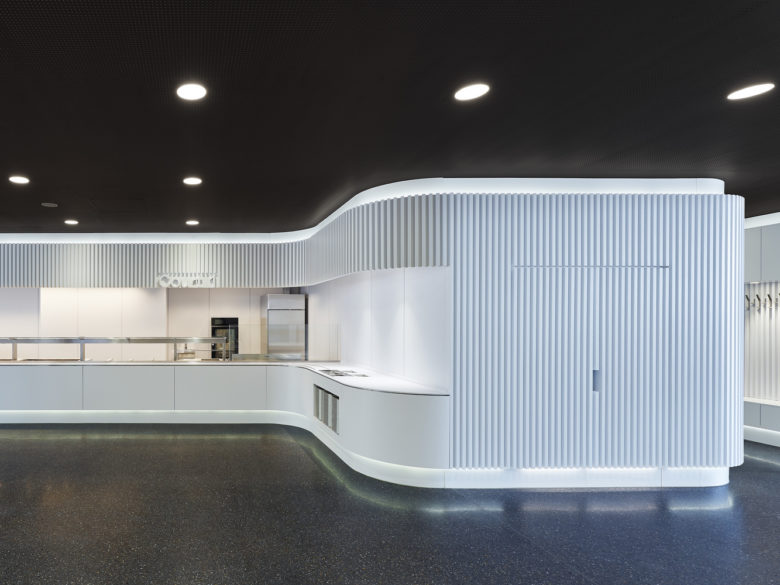 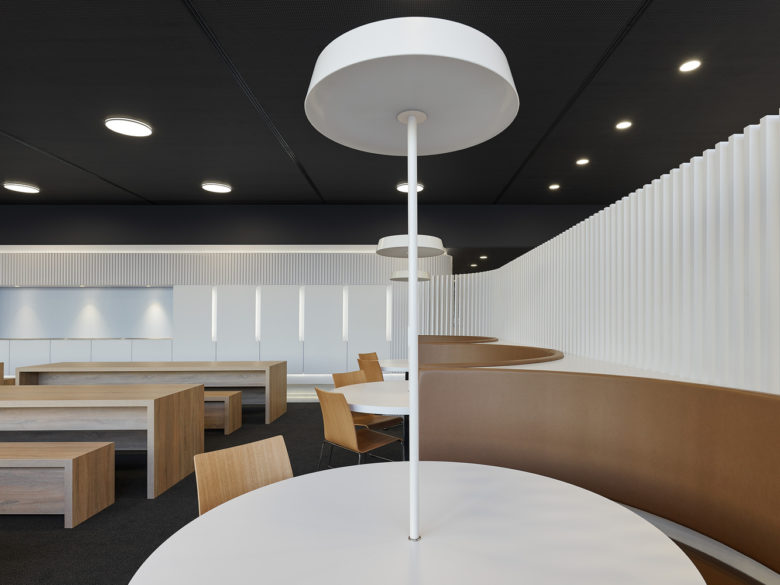 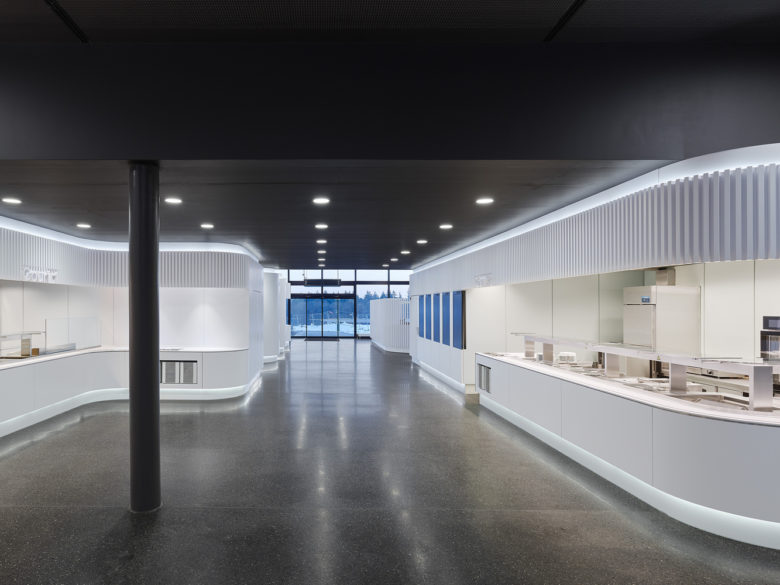