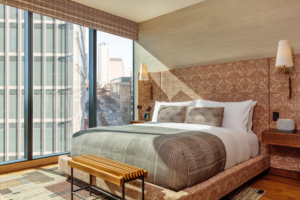 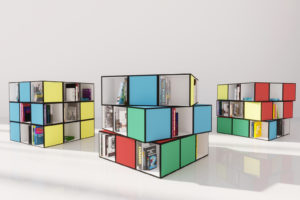 Cine Sky Cinema by One Plus Partnership 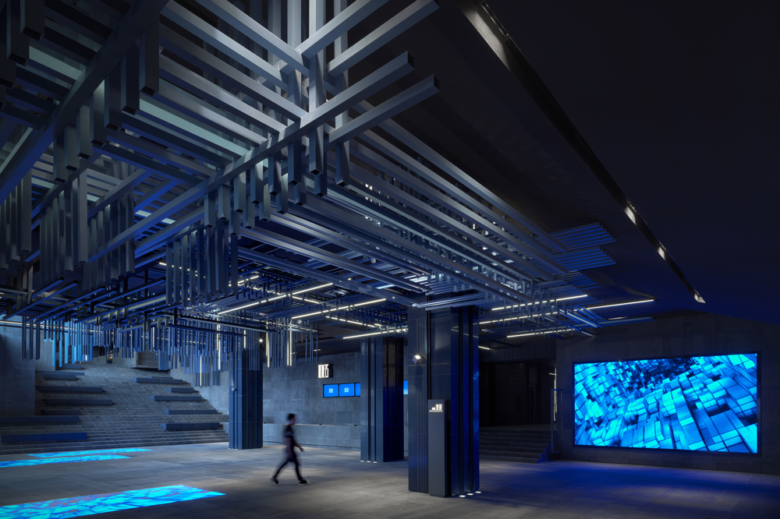 When designing this cinema in Longhua, Shenzhen, the designers recreate a virtual world of architecture – showing us a combination of real life and virtual elements. The designers use vertical and horizontal lines to build up their design concept in mind. One can see a variety of lines scattered around the cinema. When one looks at the interior of the design, it’s as if the designers are using the design and drafting software application, the Autocad 3D to draw simple grid lines one by one until the draft of the design is completed. To reflect this concept in reality, the designers use horizontal and vertical lines as their main stroke, as if turning the virtual design into a reality. The designers hope to create a real-life scene in a virtual world – just like the virtual world in the movies, creating buildings one by one. The designers combine the illusory world of the film with the cinema design, supporting the theme of the entire design with vertical and horizontal grid lines, illustrating the wonderful connection between reality and illusion.

When one walks into the ticketing lobby and look up, he could see metal bars in blue tones intersecting each other on the ceiling. The different shades of blue of the metal bars strengthen the three-dimensional visual effect. At the same time, the designer add several LED lights which are in parallel with the metal bars to enhance the depth of space and different lighting effects.

If one keeps walking along the stairs to reach the coffee bar and looks back at the entire lobby, different standing positions would open up a new perspective, showing a range of diversified virtual effects, connecting the space between the stairs and the lobby.

Moving forward to the aisle, the designers follow a minimalistic approach – the entire walkway, whether it is walls, floors or ceilings, are all covered in a simple, yet stylish tone of gray. The ceilings, walls and floors are covered in straight and horizontal pits. These pits are also inlaid with LED lights one after another, creating a strong sci-fi visual effect.

In order to enhance the best viewing experience, the ceilings and walls of the cinema’s largest IMAX theater are made up of different shades of blue sound-absorbing panels. The floor is also covered with a straight and horizontal pattern to create a depth of space. The style of the cinema is consistent from the entrance to the theatres, reminding people of the design theme.

In the VIP lounge, the designers have also installed a criss-crossed metal plate in the ceiling, with LED lights underneath. You can even see the traces of the design theme in the washroom – the blue ceiling is also made of the same element. Like the ceilings of the other venues in the cinema, the ceiling of the washroom is also inlaid with LED lights, still connecting tightly with the whole design concept of the cinema. 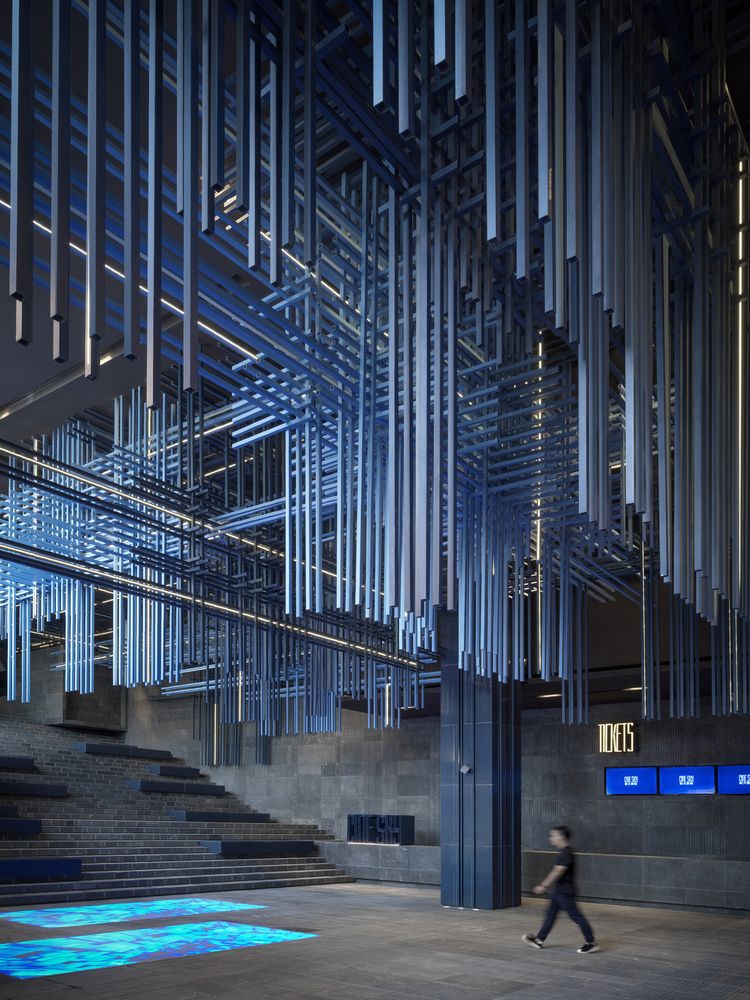 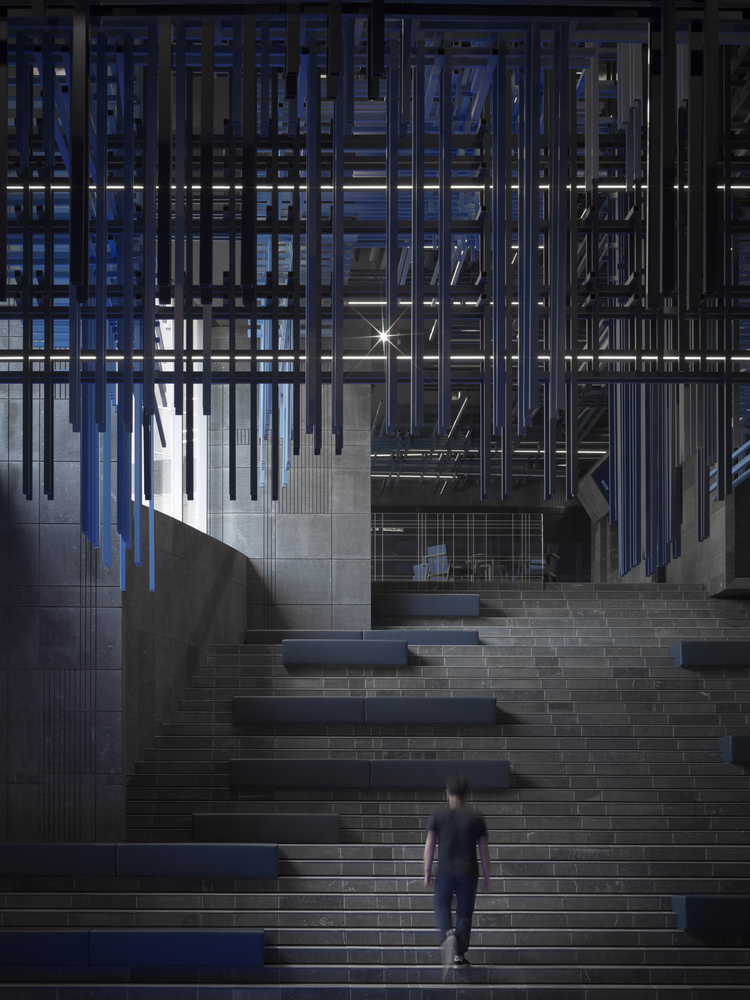 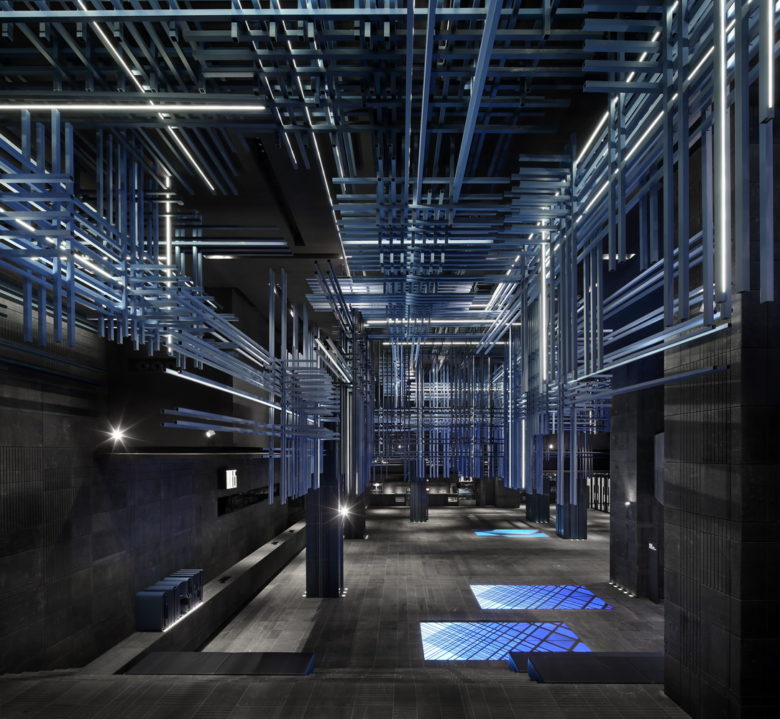 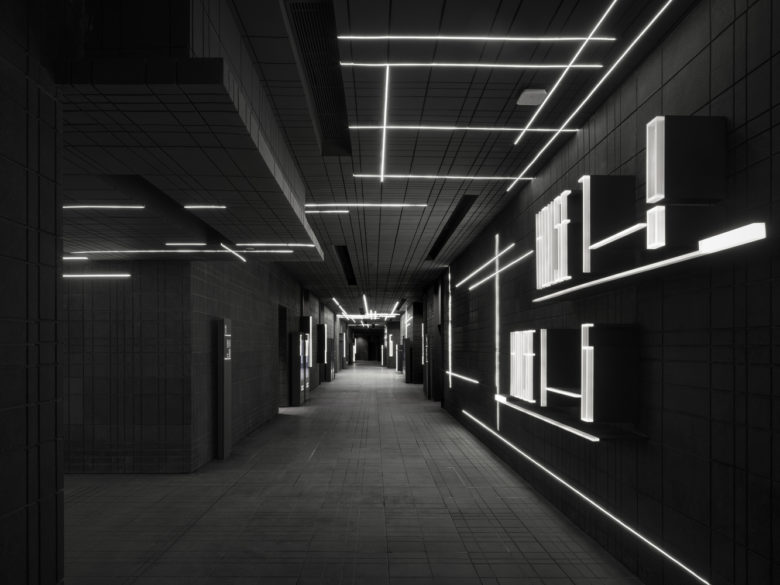 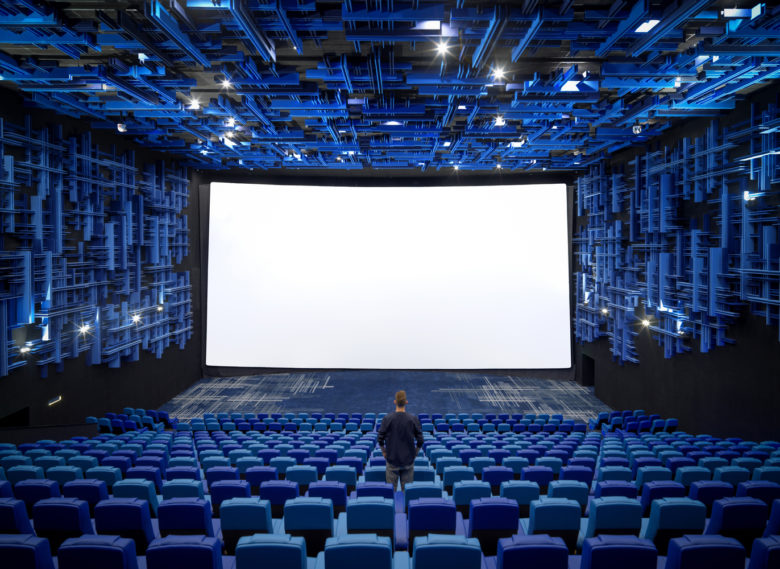 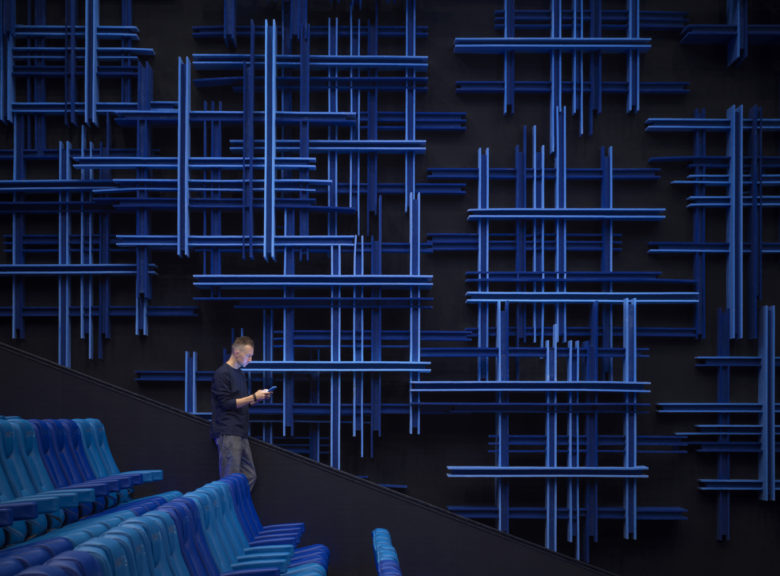 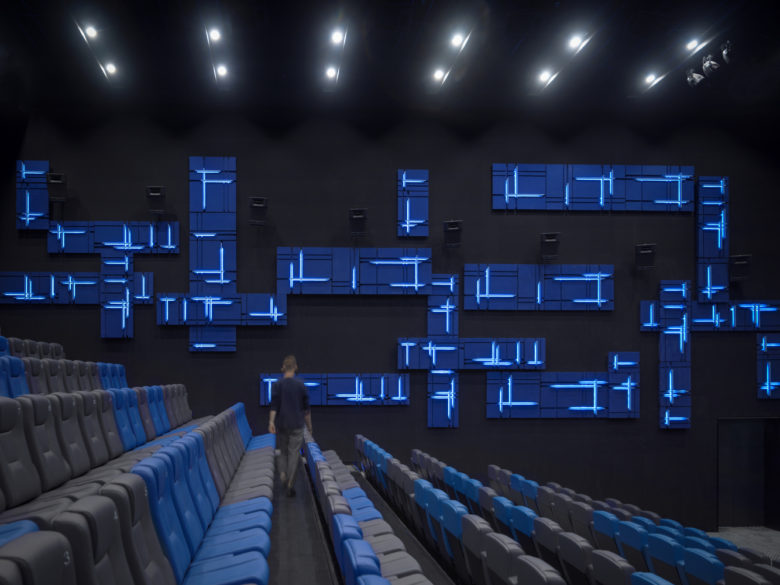 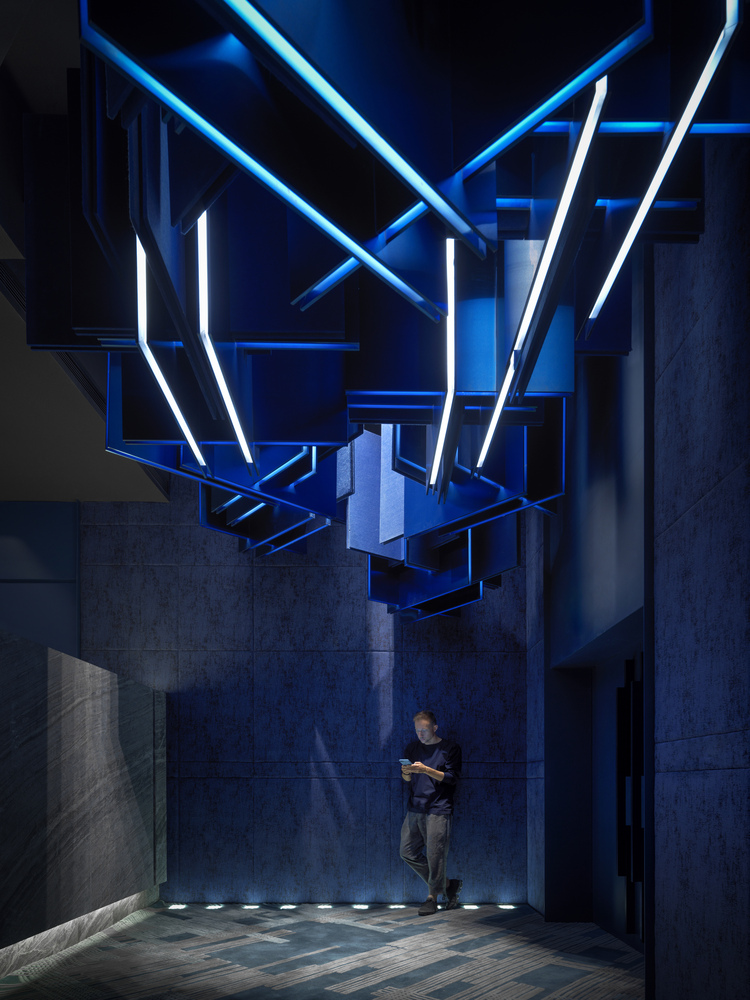 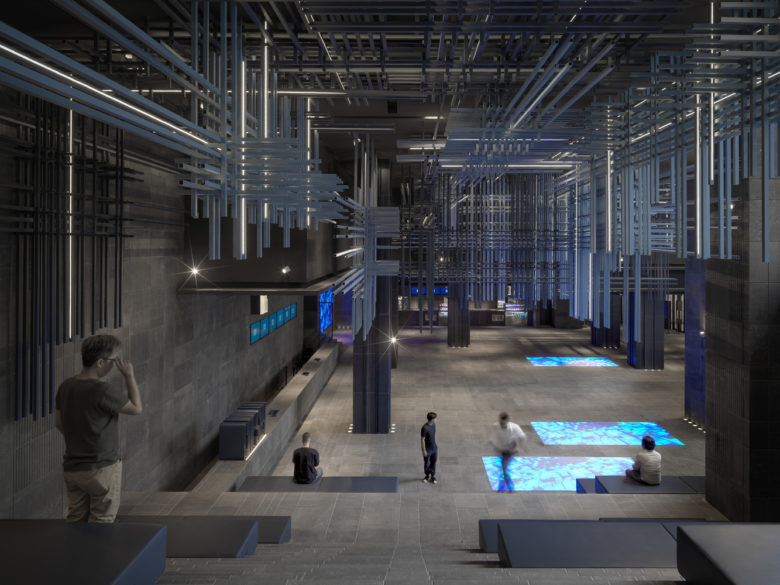 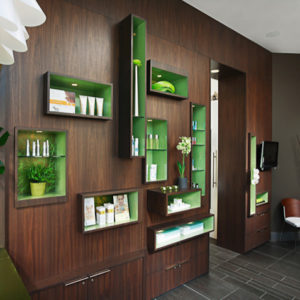 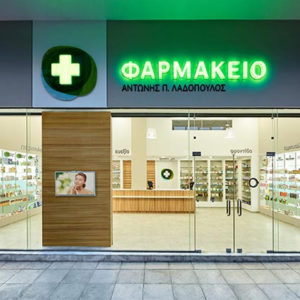 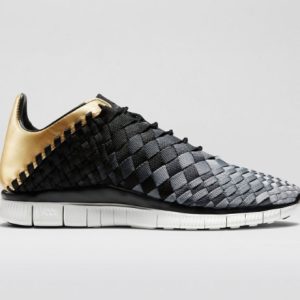 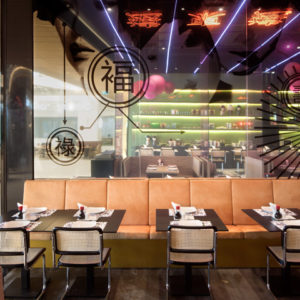