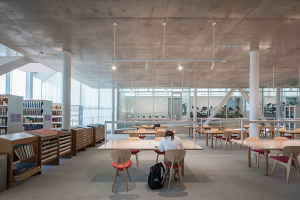 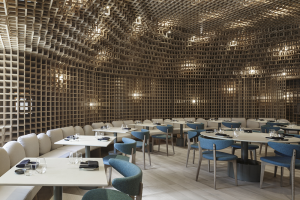 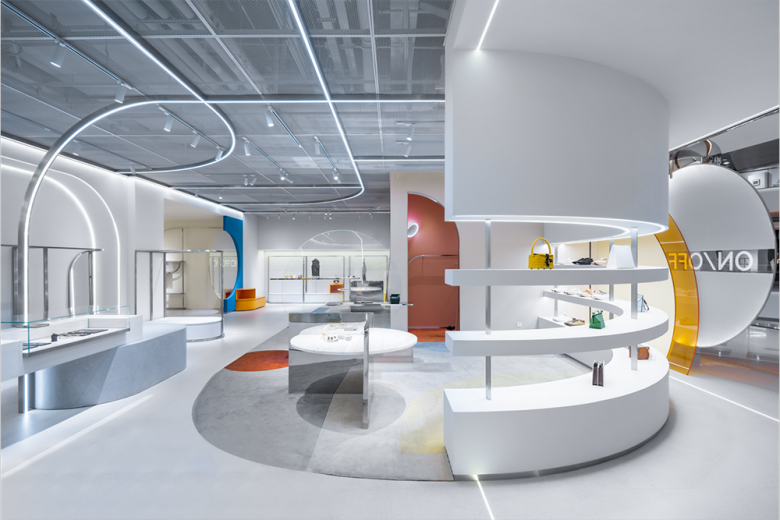 As the world’s biggest luxury market, the most prominent malls of China‘s first-tier cities surely read as a who’s who in fashion’s upper echelon. However, the retail scene in a city as fashion-forward as Shanghai is evolving beyond previously fix boundaries, spawning a new and quirky breed of shops and brands which very much reflect this segment’s maturity and demand. The new ON/OFF boutique, situated at the striking Bund Financial Center alongside the mighty Huangpu river, is exemplary of this new category of upscale independent boutiques catering to a savvy young clientele. The store occupies a 445 sqm. (4,790 sq.ft.) unit on the second floor and features a sleek interior design by Shanghai-based practice Studiolite. Inspired by ON/OFF‘s multi-brand concept which exclusively focuses on emerging fashion designers, the premises see six distinctive sections, each with captured by different settings. The store façade is a sight to behold, embedding visually arresting three-dimensional elements and offering unobstructed peeks of the store interior at the same. The semi-arched entrance is flanked by a halved sphere on which mirrors its surrounds on one side, and an equally optically challenging peekaboo construction with LED screens on the other. serving as a pop-up zone featuring a rotation of fashion showcases. A number of smaller silver spheres adorn the façade, and signal not only a recurring shape in the interior design, but also its fluidity and futuristic edge. As said, ON/OFF features different sections, but the design is as such that all are seamlessly connected by way of curved and arched panelling and cut-out fixtures, similar flooring of course, and last but not least, a mesh ceiling adorned with linear LED light fixtures whose geometric layout adds another visual layering to the store settings, as do the various materials, such as terrazzo, marble, metal and carpeting, and bright colour palette. As for the presentation of its coveted merchandise, the store has a clever modular frame and display system which allows endless configurations. ON/OFF stocks more than 60 up-and-coming Chinese brands and designers, including Wan Yi Fang, Ontime_Lab, Vmajor, KKtP, deepmoss and Sans Titre. 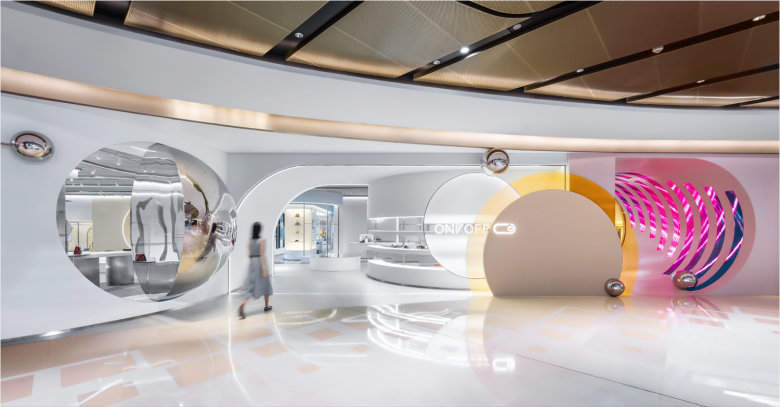 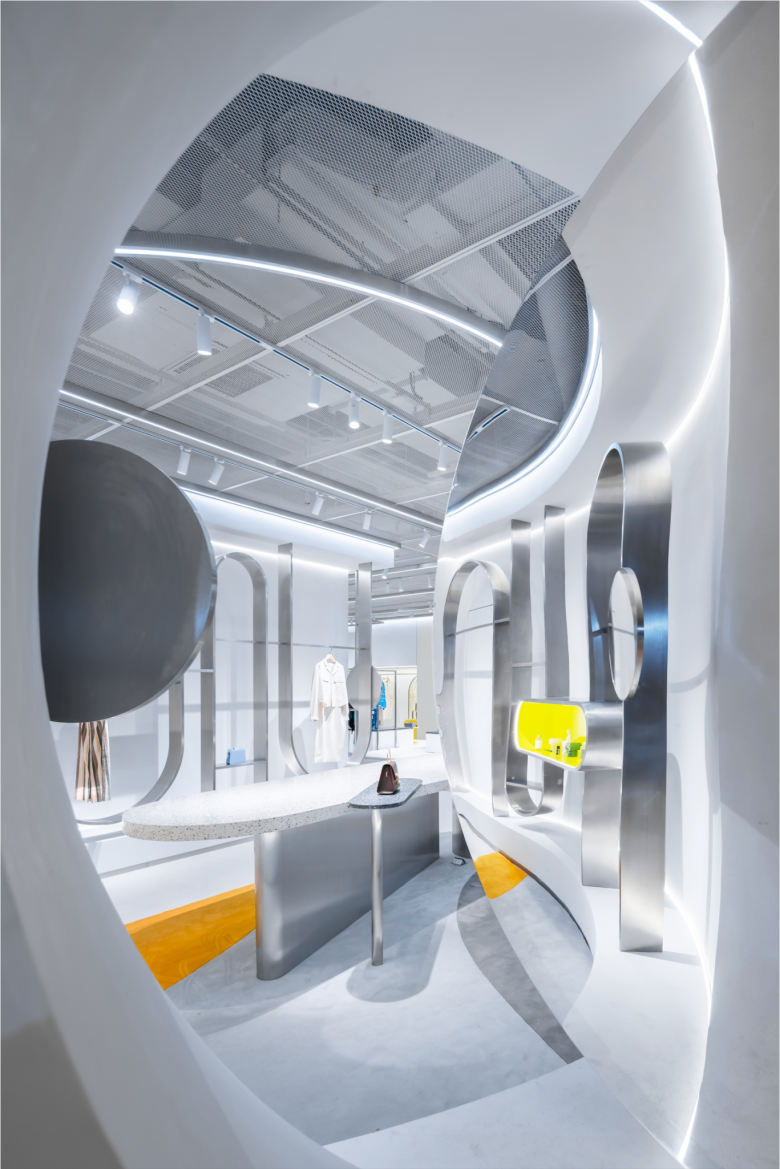 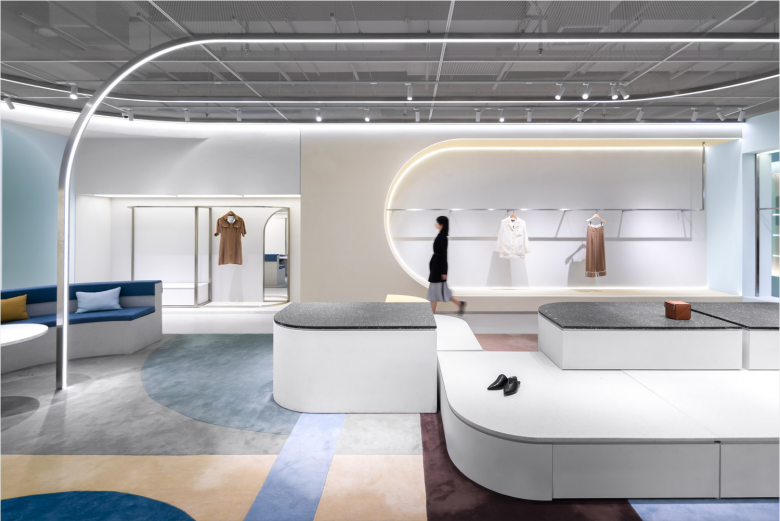 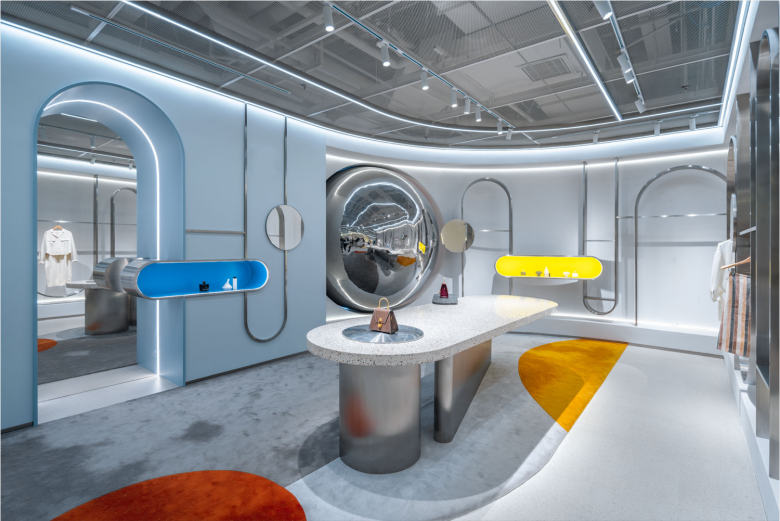 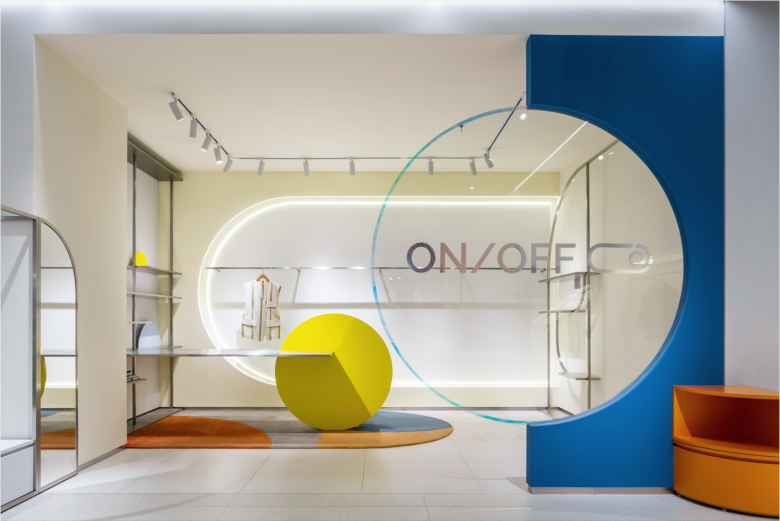 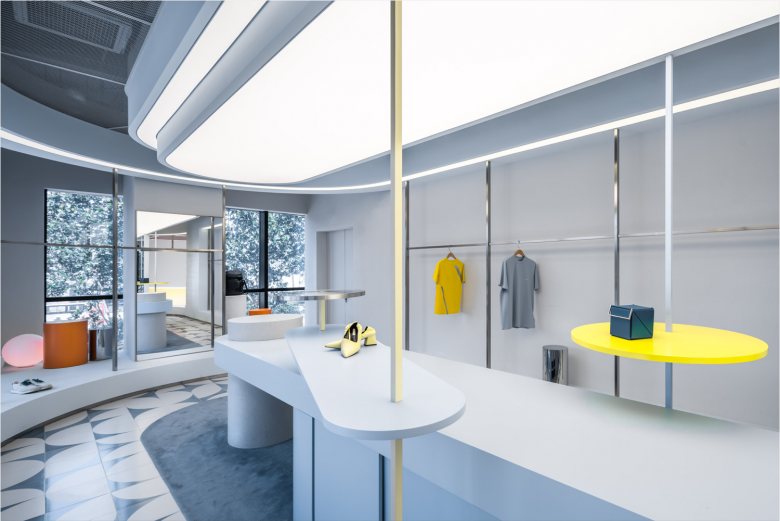 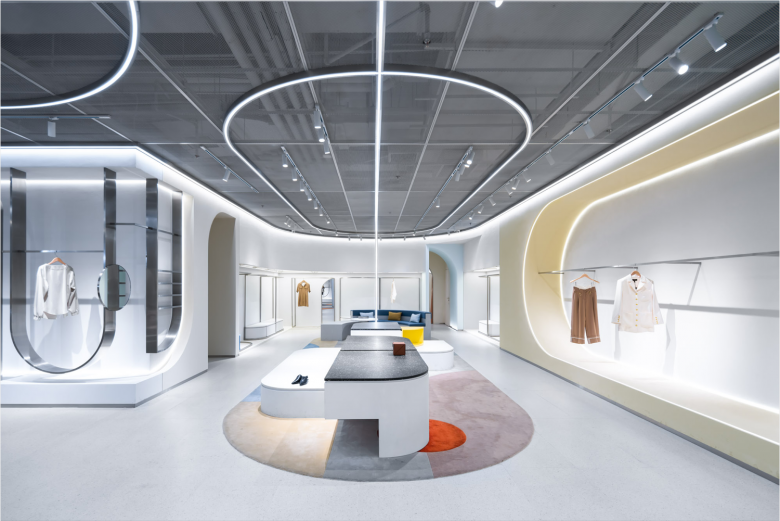 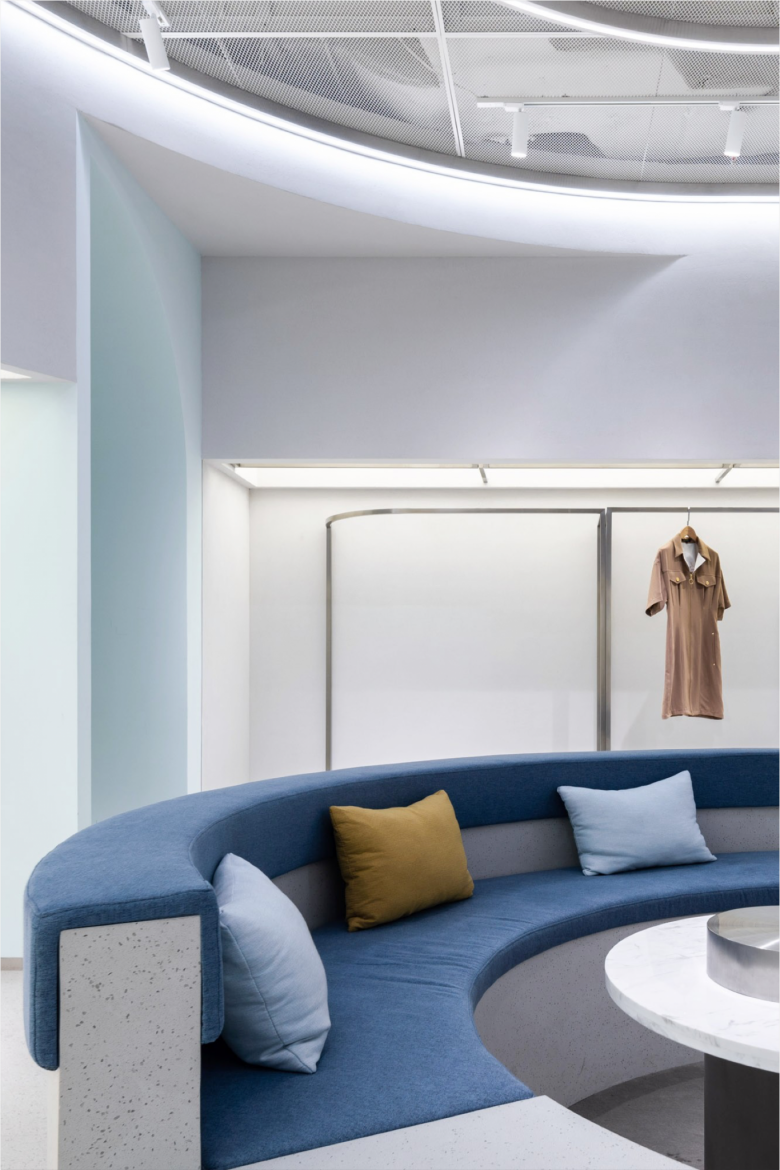 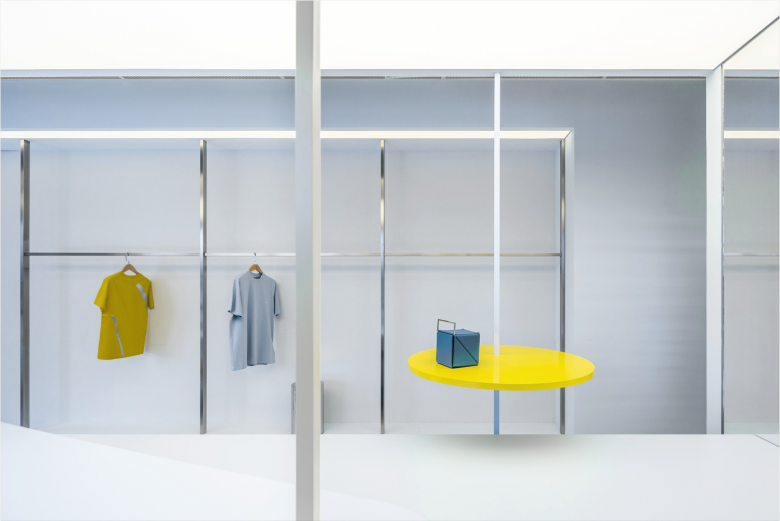 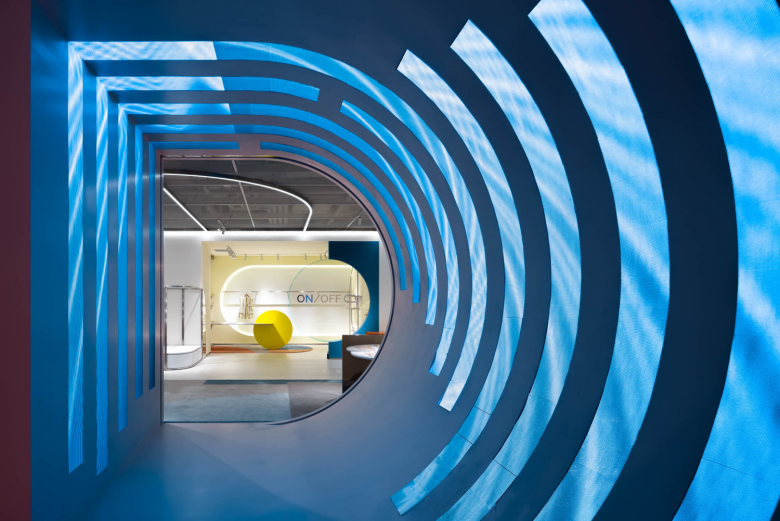 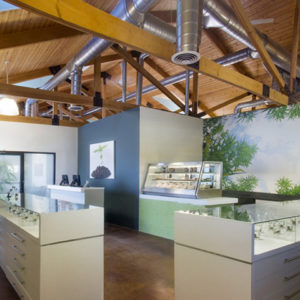 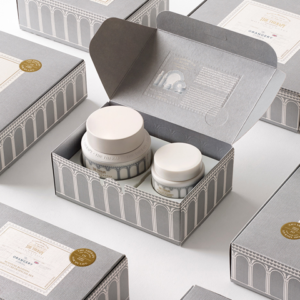 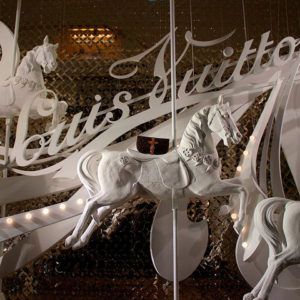 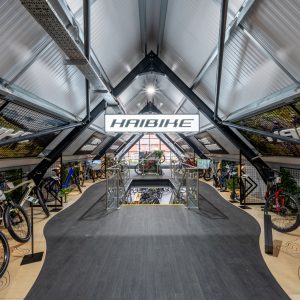