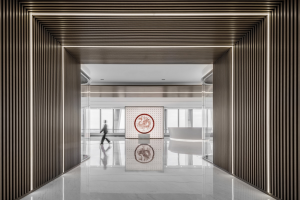 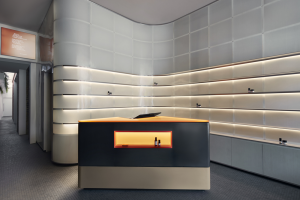 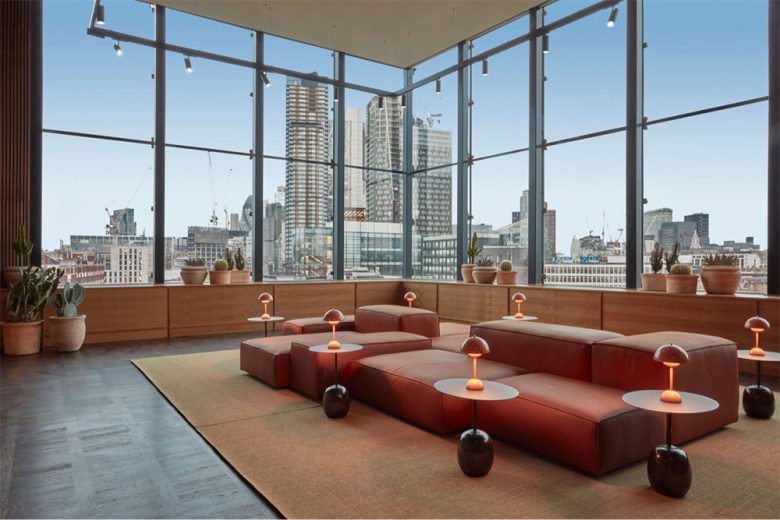 Ace Hotel London is no more, long live One Hundred Shoreditch! We’re pretty sure that those mourning the departure of the cult American hospitality chain from the British capital one-and-a-half year ago will find the new occupant a worthy successor. Concepted by hotel company Lore Group, which already owned the building when Ace Hotel London was operational, the property features 258 alluring guest rooms and suites, in addition to a number of facilities that are a destination in their own right. The hotel interior settings, designed by Lore Group‘s creative director Jacu Strauss, cleverly builds on its predecessor’s design legacy while also retaining many materials from the former settings. That said, the look of the building is quite different these days as the installation of new oriel windows lend the façade a distinct contemporary cachet.

Upon entering the premises, guests and visitors find a lobby with a strong Scandinavian feel, given the abundance of timber, covering both the ceiling and floor, in addition to a variety of carefully sourced furnishings, most notably an elongated wooden table, and last but not least, a series of totem-like timber sculptures which have been designed by Strauss and crafted by Jan Hendzel Studio, a furniture practice based in London. A large-sized mirror not only reflects the daylight that floods in, but also optically enlarges the lobby area. Indeed, that’s Ace Hotel London’s original reception desk, but it has been slightly tweaked with coloured perspex squares to give it an updated look. The guest rooms and suites are designed to be true retreat from the city’s hustle and bustle, and as such, feature a soothing neutral palette. The rooms have super comfy beds, hybrid work and dining spaces, seating for two, bespoke artwork by the multi-tasking Strauss and a feature tapestry wall.

In a self-pampering mood? The Studio Suite readily awaits you. At 71 sqm. (764 sq.ft.), including a private terrace, it’s One Hundred Shoreditch‘s largest pad, and comes with a separate living room, bedroom and great views of the city. Obviously, there’s WiFi and TV, but also, comfy robes, D.S. & Durga bathroom amenities, a full-size fridge with treats and lots more extras that appeal to the savvy modern traveller. The facilities at One Hundred Shoreditch add to the hotel’s aim to once again become the stomping ground of the hipster Shoreditch community. The casual Lobby Bar, adorned with a giant paper artwork in flamboyant red, is every guest’s extended living room living room, serving beers, wines, cocktails and even pizza. The hotel’s restaurant and wine bar, called Goddard & Gibbs, is an equally stylish affair, featuring a Mid-century modern-inspired with slatted walls and a visually arresting rock sculpture in a striking yellow hue, an artwork that’s once again crafted by Strauss, as a focal point.

A series of identical sand artworks in matching yellow adorn the walls and unapologetically tie in with the sculpture. The all-day restaurant specialises in British seafood with a focus on ethical sourcing and local suppliers, and the wine bar offers wine from a mix of modern, forward thinking producers alongside more celebrated regions, complemented by tasty sharing plates. One floor below, in the basement, sits Seed Library, a cocktail bar where to start the evening or end up until the wee little hours in a setting inspired by legendary film director Stanley Kubrick‘s sci-fi masterpiece and created by Mr Lyan a.k.a. Ryan Chetiyawardana. Last but not least, there’s The Rooftop, an elegant yet playful restaurant which will be opening its door on Thu – May 19. Taking cues from sunny Palm Springs, featuring a exuberant pink colour scheme, lush plants and sweeping views from the outdoor rooftop terrace. 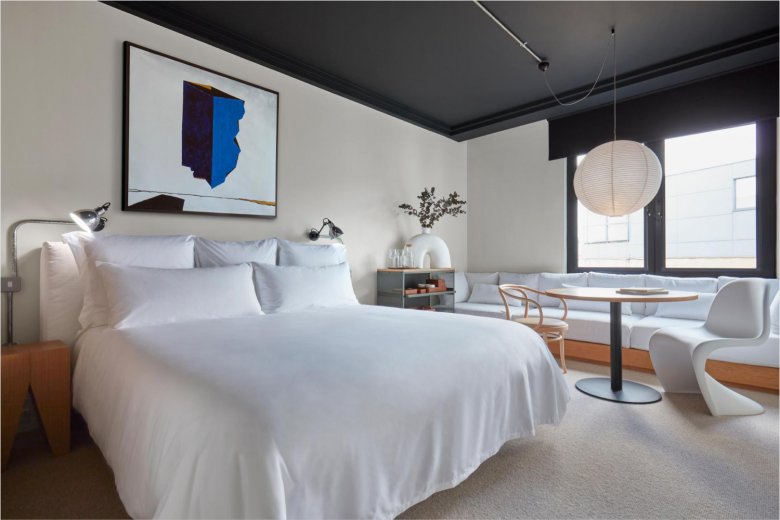 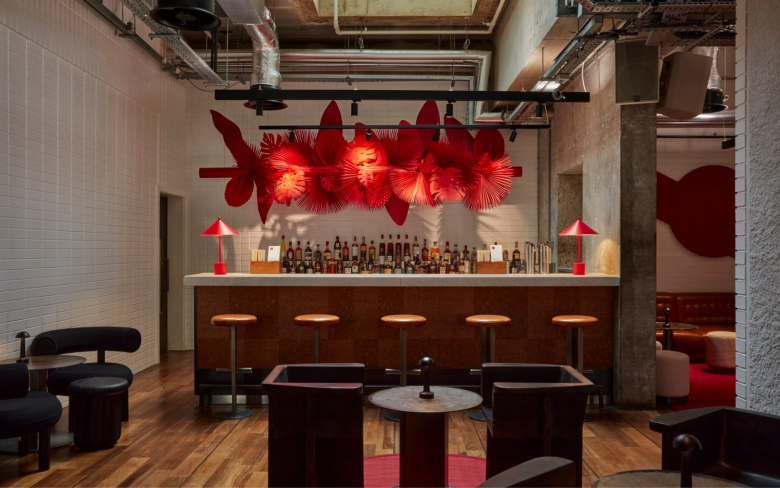 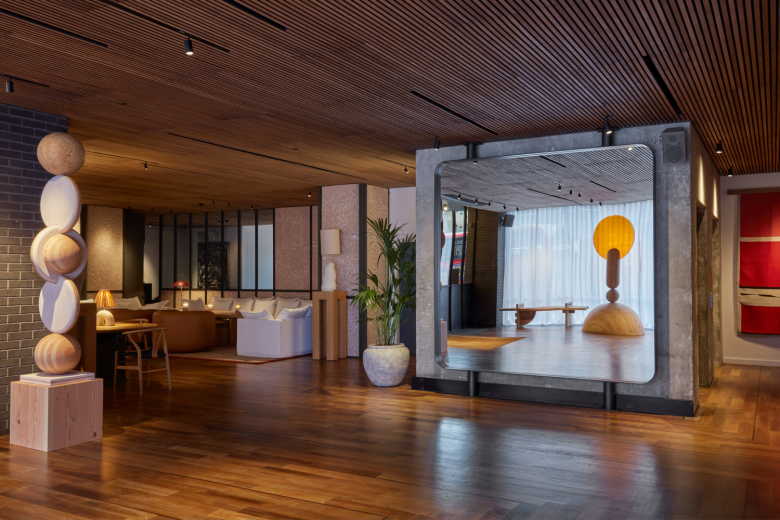 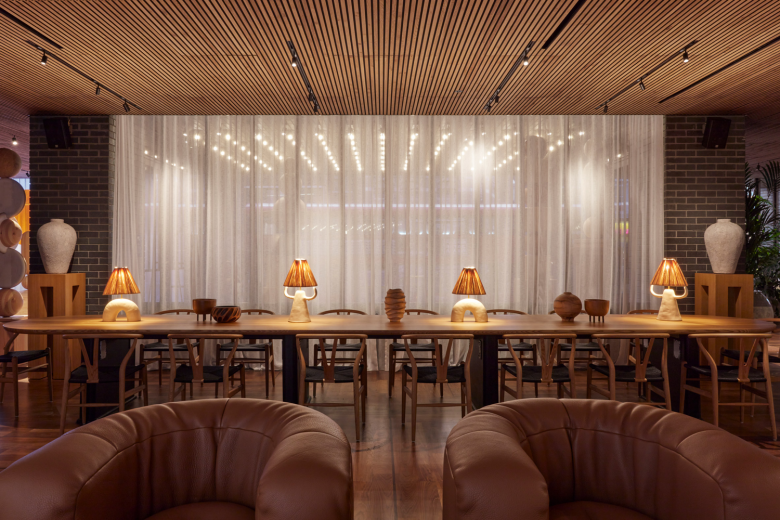 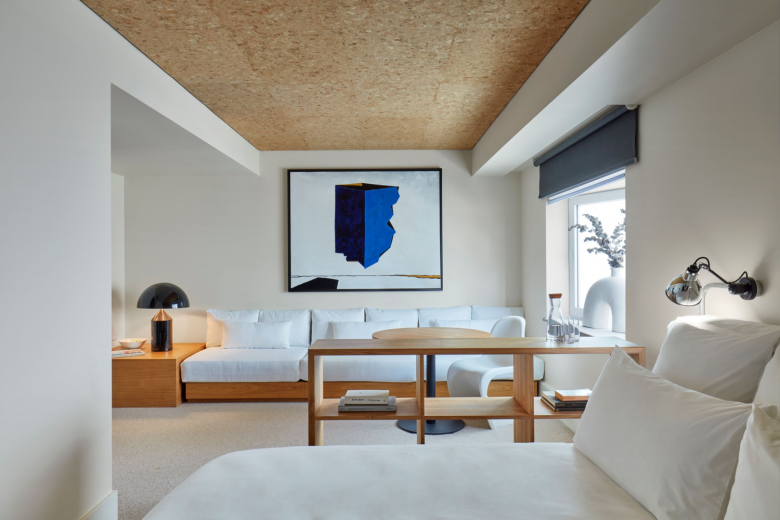 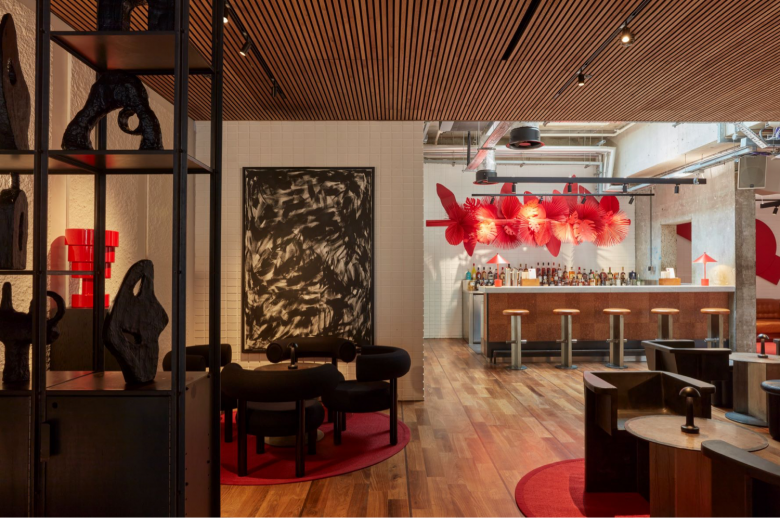 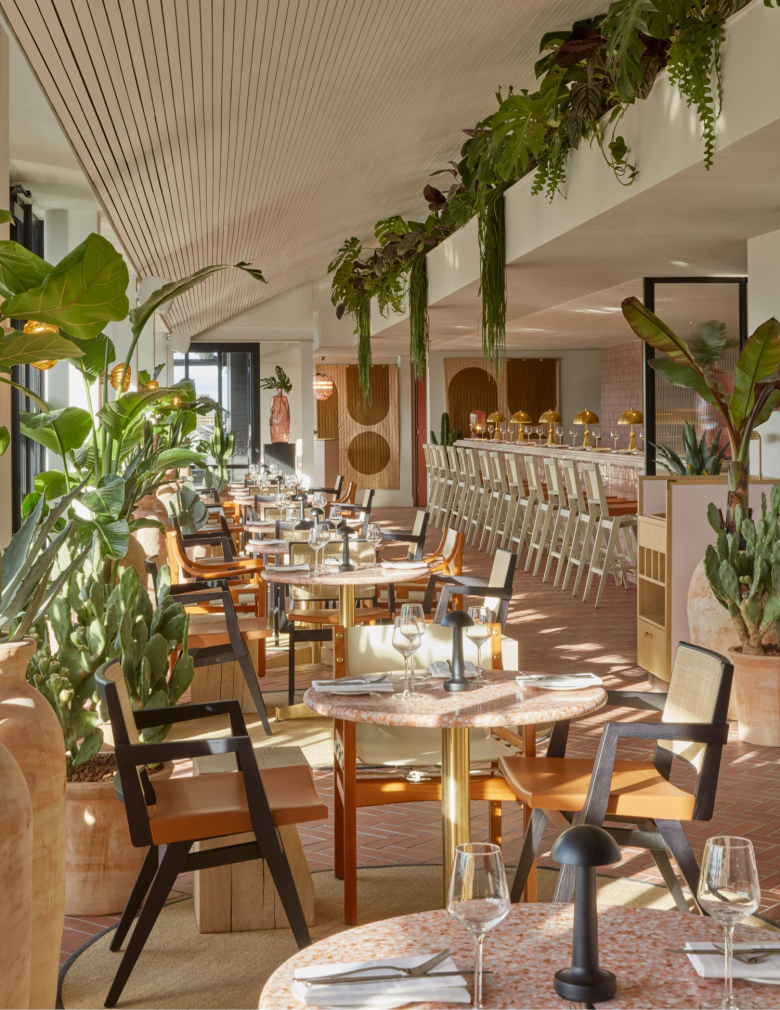 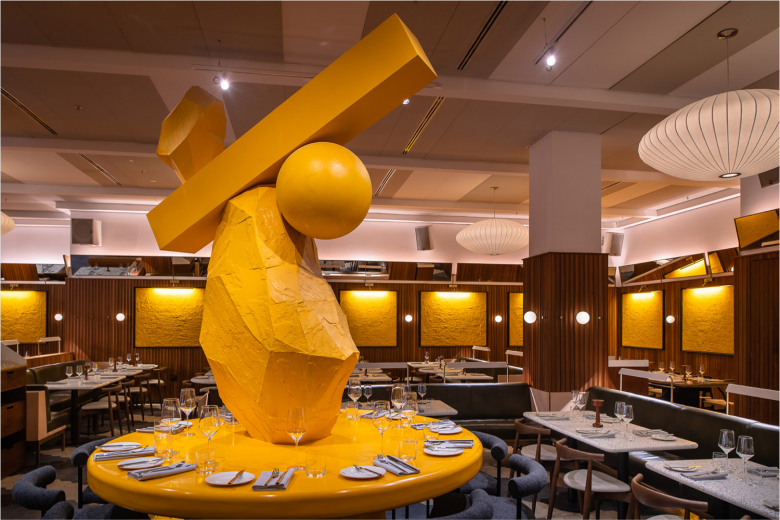 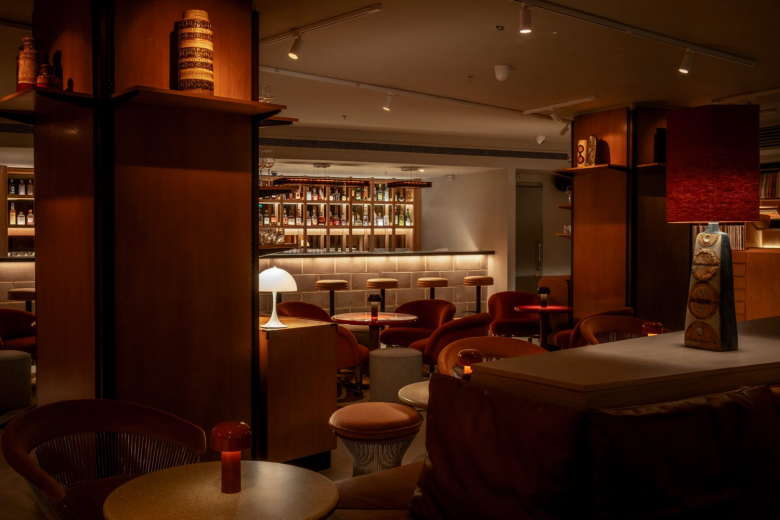 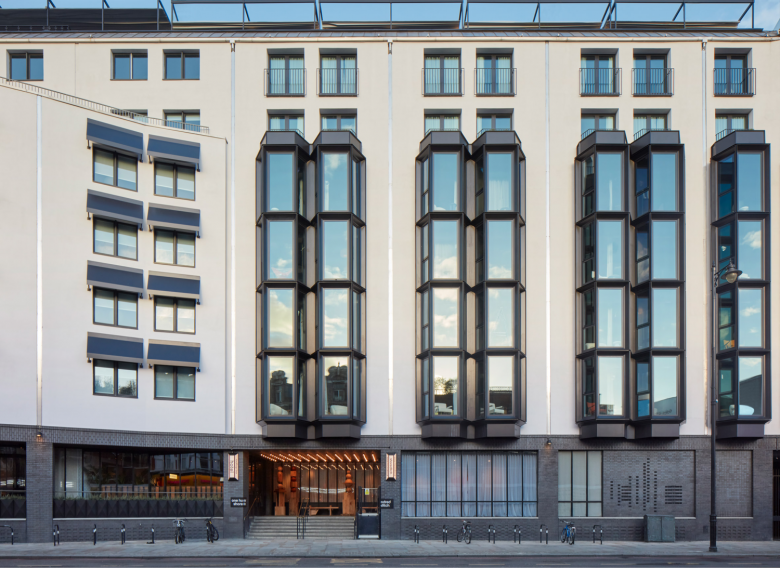 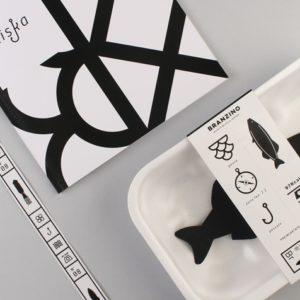 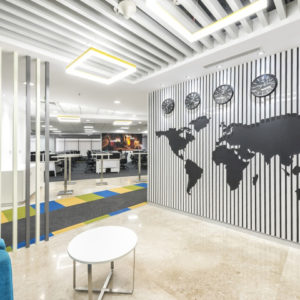 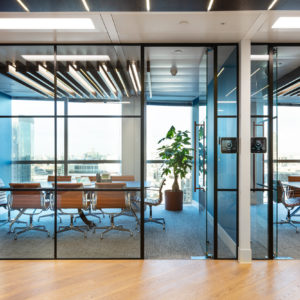