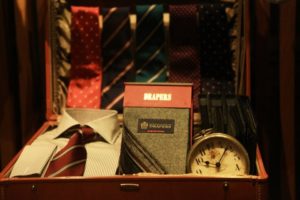 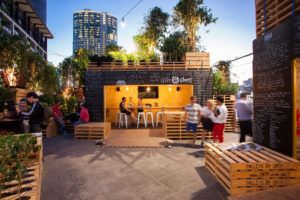 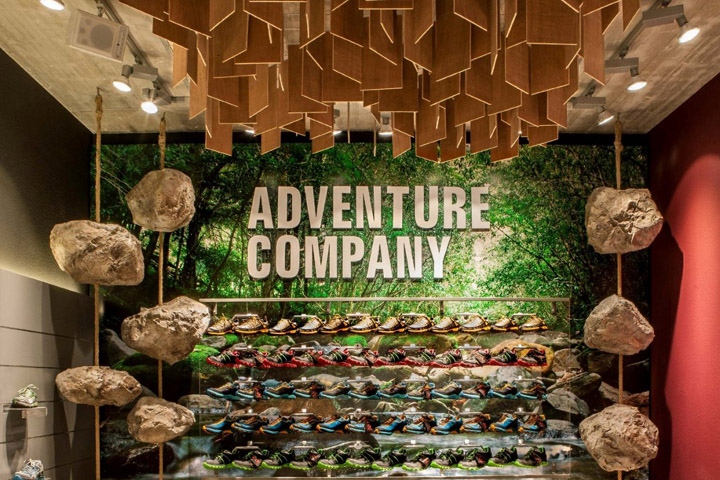 With the new adco outdoor shoe store in Freiburg, the planning and project agency K.U.L.T.OBJEKT, from Dresden, presents an innovative, interdisciplinary store-concept that transfers knowledge gained from neuromarketing into store construction. Scenography, as seen in theatre, together with pseudo-reality appeals to the subconscious of those who see it, allowing them to immerse themselves in a world of humour and intrigue. Not only is nature represented here – it is an active part of the concept! Playing a game
The observer sees sheep in the meadow from above, a bird’s eye view, so to speak – although his eyes are directed horizontally, towards a wall, and he is situated in a cellar right in the centre of Freiburg – or to be more precise, in the basement of Philipp Schweizer’s newly opened branch of his chain of outdoor stores. The succulent meadow with the grazing sheep is a piece of dramatically well-illuminated photographic wallpaper. A few tufts of artificial grass, added by hand, magnify the three-dimensional effect, strengthening the illusion. The K.U.L.T.OBJEKT team responsible for the new store in Freiburg knows all about illusion, allure and perception. The backdrop of the store is based on the concept of “playing a game”: As soon as you enter the store, you are captivated by the – in part extremely unexpected – scenery in a world where you can allow the cinema in your head to take over completely.

The old building that houses the 200m² store had to be renovated extensively before work on the actual store-concept could begin. From the very beginning, the renovations and alterations were carried out in close collaboration with the anchor tenant adco, and the planners from K.U.L.T.OBJEKT. Therefore, the cellar, which was previously used as a business’ cold-storage
area, was opened up and the beautiful old brickwork exposed. In the same way, the metal carrying beam that had to be built in before the ground floor was completely stripped of walls, was left visible, and incorporated into the store concept. Among other interesting features, there is a glass floor on the ground floor, which is designed to be walked upon. This transparent floor surface exposes a view into the mysterious ‘underworld’ with ferns and rocks, almost like at the Hobbits in Middle-earth. In the centre, a spring bubbles to the surface on monitors that are partially hidden under ‘rocks’. “Whoever walks over the glass surface is so fascinated by the movement of the water beneath him, that he doesn’t notice the monitors anymore. The customer becomes part of a film that makes him forget the hum-drum of reality for a moment at least,” is how Jens Fischer explains his principle that uses movement, symbols, colours and haptics to trigger the subconscious of the customers. A shopping experience of the next generation
The free-floating staircase that has steps without risers and a glass-filled stair-rail was chosen with good reason, and was already planned in during the building process. Stairs in stores are often more of an interruption than anything else. Here, the opposite is the case: It gives the impression of a mysterious nature trail that promises further discoveries on the experience-filled journey through the store. The staircase leads you through a – partially real – birch copse. On the three monitors that have been added to the scenery, a stream splashes down, and your curiosity is aroused as to what you will find in the basement. In the minds of the customers, the stairs disappear because of their high level of transparency. The functionality of the stairs has been set into scene by the K.U.L.T.OBJEKT planners just as perfectly as the emotional side: On the ground floor of the store, an Internet bar with iPads has been set up. Here, you can rummage through the online-shop of the outdoor specialists, which has been run parallel to the physical store for the last 10 years. The product carriers in the trail running segment – the store contains Germany’s first specialised shoe shop for trail runners with a suitable assortment of professional shoes – were built in a way that allows the customers to turn the shoes and get get a good look from every angle. Philipp Schweizer has nothing but praise for both the selling floor and the storage space: “We need to keep a large stock in the store, so we have a huge number of shoes here. The new concept utilises every possibility imaginable. Even the large wood-pile contains drawers where shoes can be stored.” Story-telling in the fourth dimension
“The basic principle of the experience-oriented layout of the store is the activation of positive memories that are stored in the mind,” says Jens Fischer, owner of K.U.L.T.Objekt. The neuropsychological approach is to enrich the usual ‘brain scripts’ of the customers with new, unexpected impulses. The birch stems, rocks, flowing water and pleasant wooden surfaces all
over the store send positive signals from nature. Sheep simply stand around or trot amiably across the plentiful monitors. The likeable animals continue the story of the store into the future: Soon, customers will be approached, in a competition, to give names to the sheep. The further development of the story through advertising and POS campaigns is part of the concept.
“Is it brilliant or is it completely crazy?” retailer Philipp Schweizer thought, when he got a first look at the plans for the alterations to his store. His response two months after opening: “This is store construction perfected.” 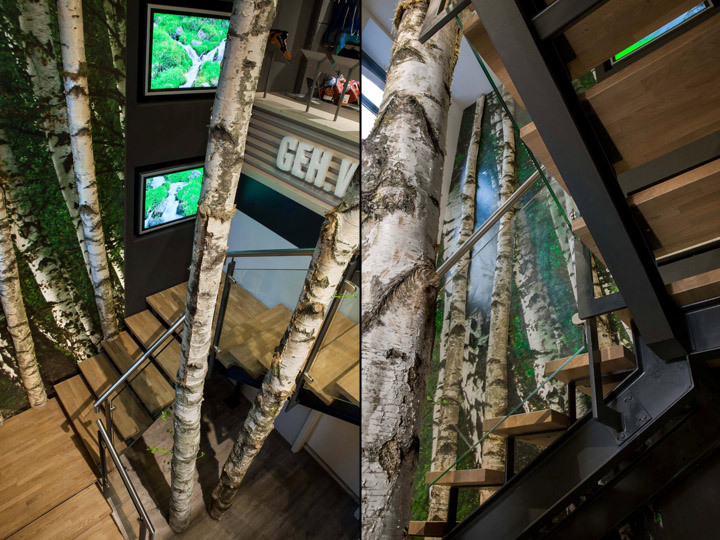 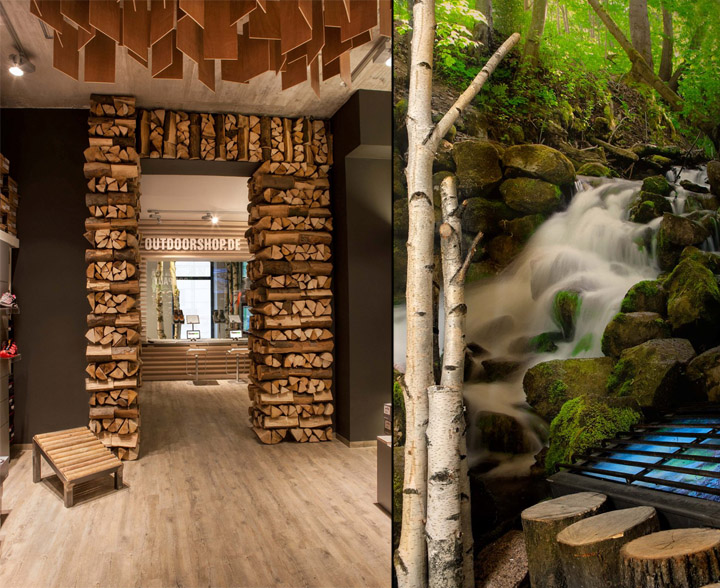 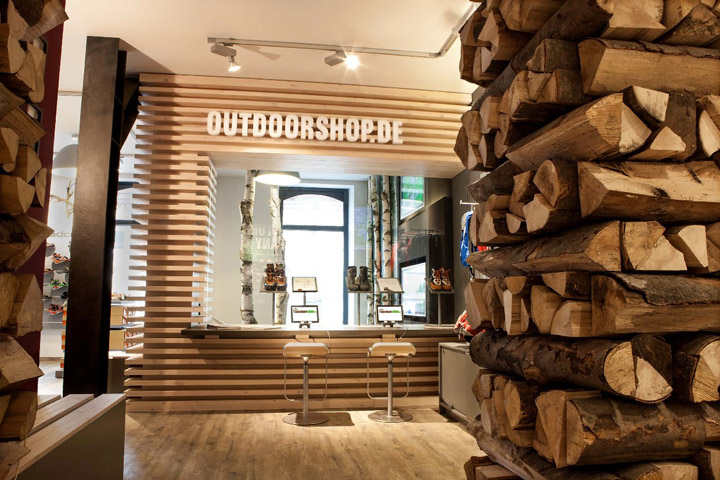 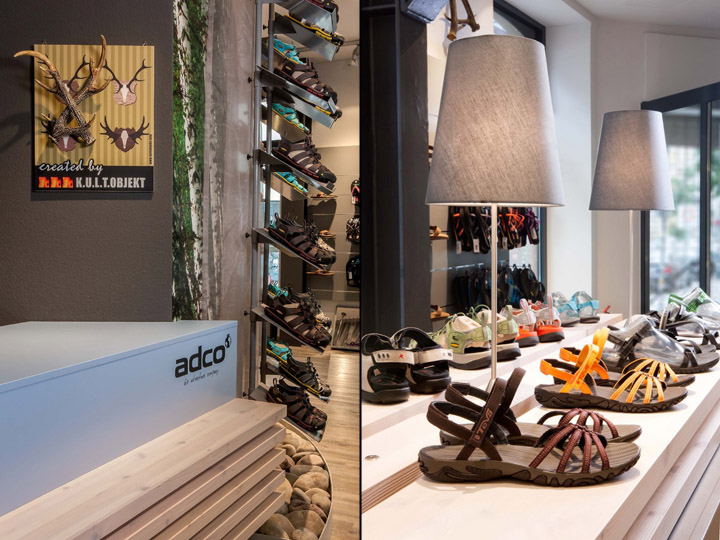 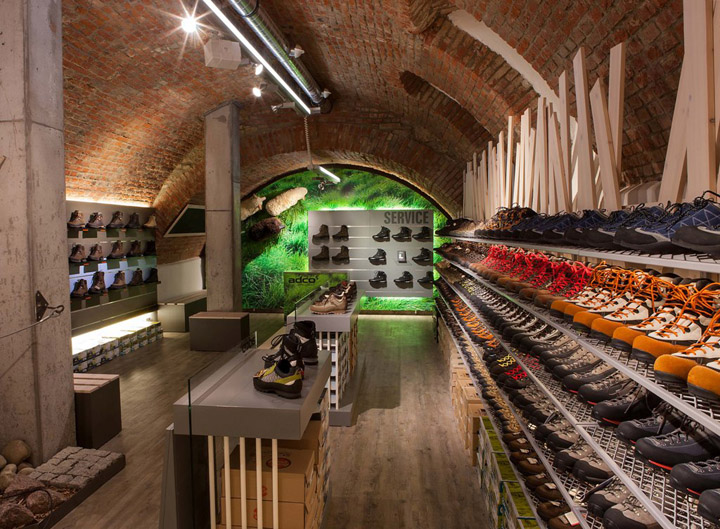 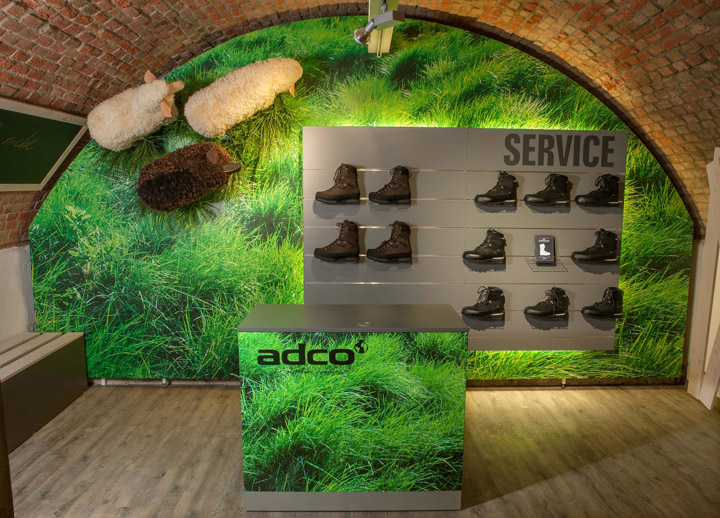 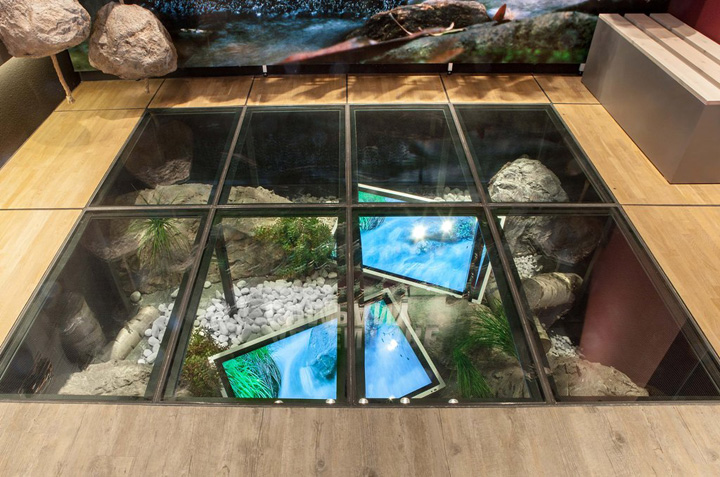 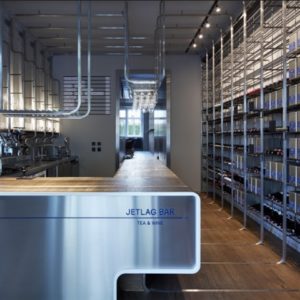 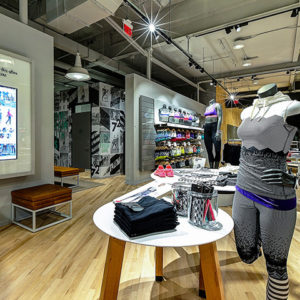 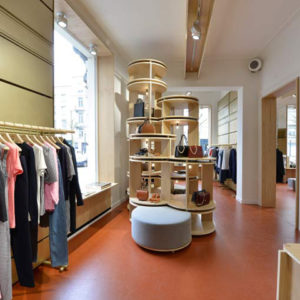 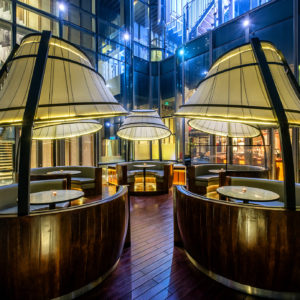