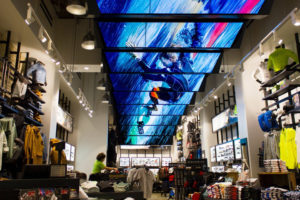 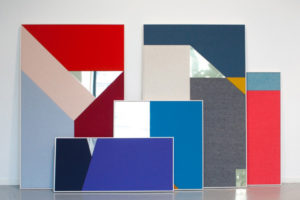 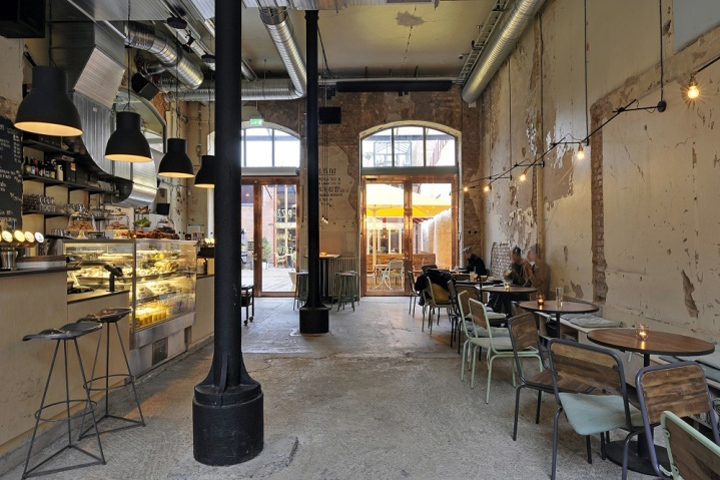 In 2013, Gothenburg restaurant operator Avenyfamiljen acquired two buildings on Tredje Långgatan. The intention was to change their function from auction house into three restaurants, exhibition areas and corporation headquarters. Also a wine bar, a beer café (KAFE MAGASINET), a food truck, 200 sqm rooftop farming and an organic bakery. This makes Auktionsverket Kulturarena the most varied public commercial project in Gothenburg for a long time. KAFE MAGASINET is located in the the older building. The building is well known, of historical interest and of a protected status. It was designed by Carl Fahlström, who later came to be city architect of Gothenburg, in an elaborate brick architecture. It was built in classicist style, with medieval touches and symmetrical organization. Modern details such as cast iron beams and pillars are exposed. The building, finished in 1892, is claimed to be the world’s oldest building that was intended for auction operation. The premises of Kafe magasinet were used as warehouse since the 19th century. The two entrances are reached by each of the two backyards, which in connection to the re-modeling of the building have been opened to the public, and tied together in a new street level circulation with outdoor seating. Kafe Magasinet is a café, serving different kinds of beers and drinks as an addition. It’s open from early morning to late evening. The concept of the interior design was to keep it original, use the soul of the room and its humble character. Existing concrete floor, walls and surfaces were kept with minimal treatment. The traces of a removed floor structure and electrical appliances were left in the wall surface. Cast iron pillars were painted black. New copper and glass doors are added to the old wooden doors. Untreated plywood, fibreboard and black steel are recurrent materials in the interior, a material choice that goes in line with the raw, informal characteristic of the space. The bar follows the mirrored symmetry of the space and can be reached by several sides. Bar, back bar, and shelving are made out of untreated plywood and pigmented fibreboard. Same goes for a long sitting bench on the opposite wall of the bar – the bench is sitting integrated with storage, spans along the whole wall and is made out of untreated plywood, with local materials and built on-site. The choice of untreated materials allows the guests to leave their traces of use. 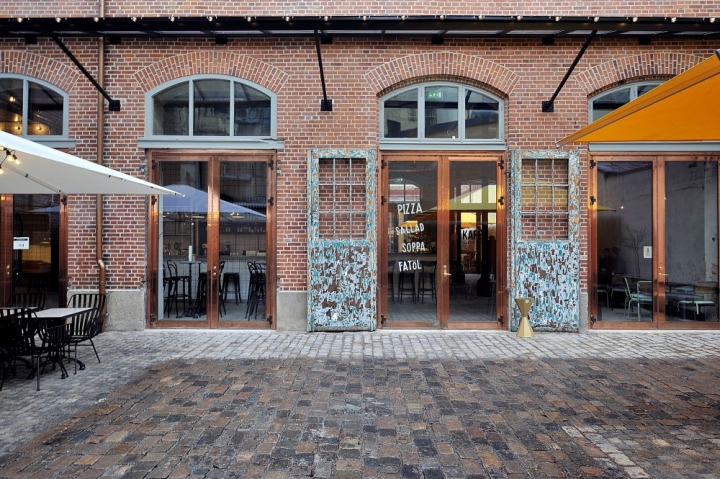 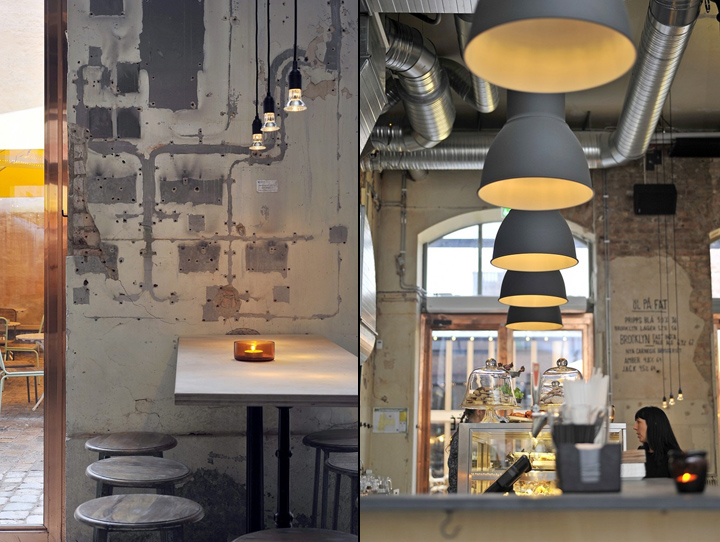 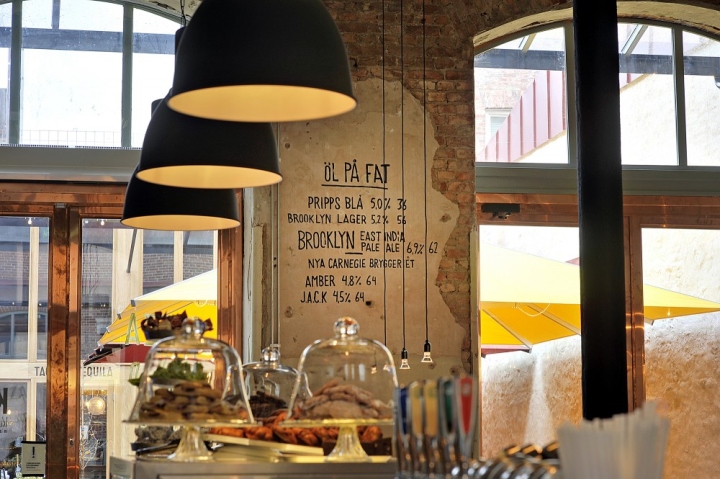 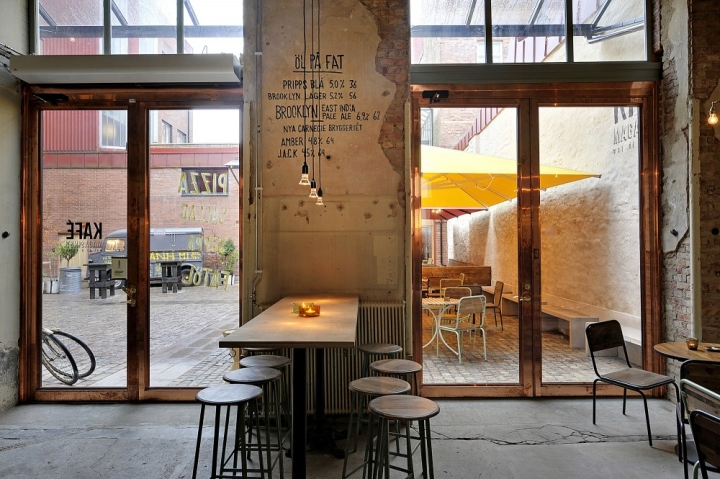 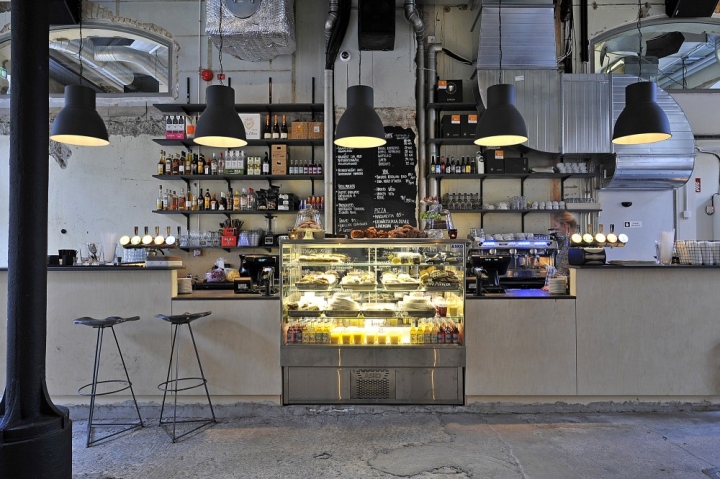 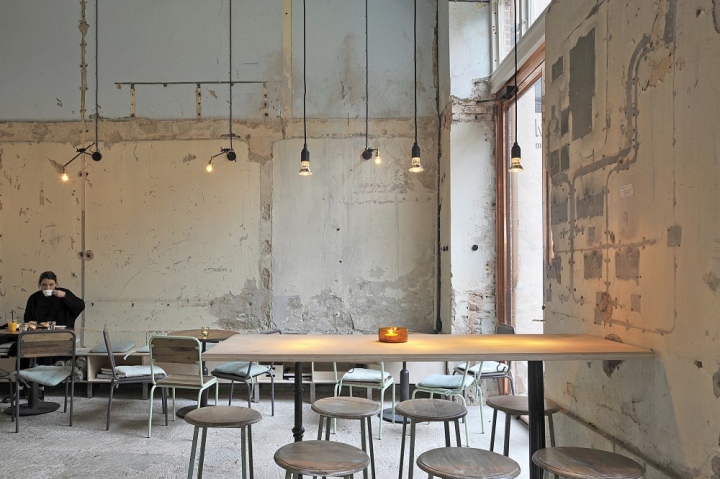 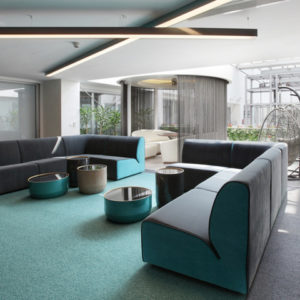 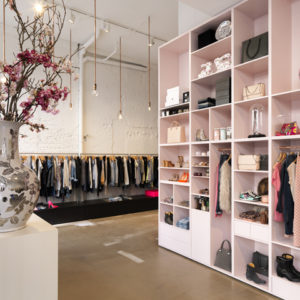 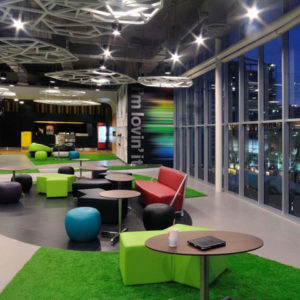 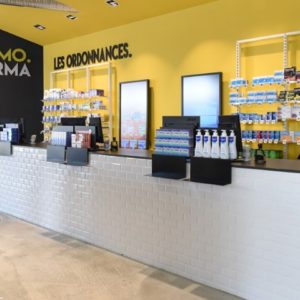