Cosmo – a chameleon couch by La Selva for Missana 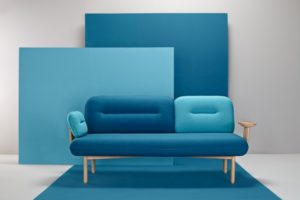 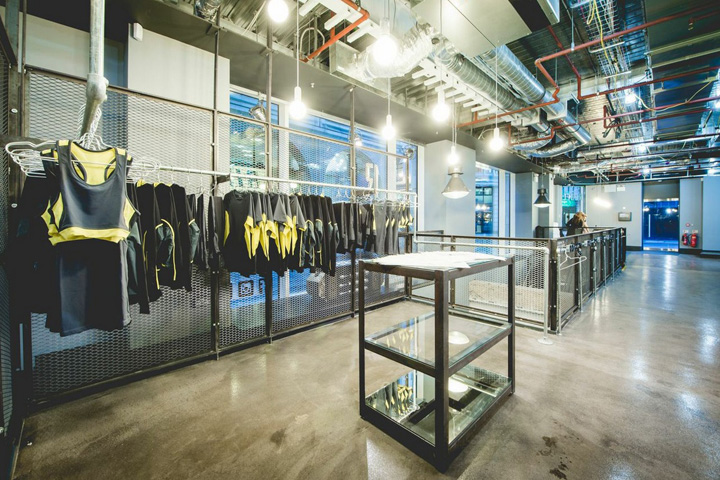 LONDON, UK, 28 January 2015 – a new gym concept opened this month that is set to disrupt the way City dwellers keep fit for the better.
The boutique ‘no-contract’, ‘pay-as-you-train’ gym, the first of its kind located beneath London’s iconic buildings The Gherkin and Heron Tower (63 St Mary Axe, EC3A 8AA), is a far cry from its run-of-the-mill peers. With its contemporary design-led ‘industrial luxe’ aesthetic, 1Rebel is poised to create an environment that motivates and facilitates ‘high intensity interval training’ while accommodating a lifestyle space where members may cool down, dwell in and get ready for a night out against a backdrop of live entertainment, arty installations and bespoke playlists curated and mixed by some of the dance scene’s most internationally acclaimed DJs.
1Rebel’s brand spirit is inherent in its name – rebellious, risqué, playful and edgy. Positioned as more of a ‘destination’ than a gym, its un-preaching, non-judgmental approach to fitness is underpinned by a clear and resounding empathy for the hedonism and sinful excesses enjoyed by its typical, fast-living clientele.
Sheridan&Co – best known for its work in designing retail environments for some of the world’s leading luxury brands including Laura Mercier and World of Whiskeys as well as pop-ups for start ups including Face Gym – were tasked with capturing this work-hard-play-hard, detox-retox spirit through the brand’s various touchpoints, devising striking visual mechanisms that would appeal to the brand’s core market of twenty-something dynamic, image-conscious professionals.
As part of its approach, Sheridan&Co mapped out every detail of the customer journey and provided detailed competitor analysis and trends research to develop a retail strategy that would inform the design, look and feel of 1Rebel’s product packaging for clothing, as well as its window and retail displays. These reflect and enhance the gym’s brand identity, language and overriding aesthetic of paired-back modernity, with its interior’s accents of black steel and sculptural copper creating a premium yet industrial, utilitarian feel. From this, Sheridan&Co were tasked with designing two semi permanent window displays where they drew inspiration from the gym’s patented workbench, dubbed “The Box” – a central focus of the Rebel ReShape workout and unique touch point for the club.
“The Box” itself is given due prominence on a plinth – an art installation-style lectern with a screen-printed metal plaque upon which an education piece is inscribed. It reads: “THE BOX” – “This is no ordinary workbench, it’s a work station built around your workout, so you stay focused on the job at hand, no sharing weights, no breaks between sets, no stopping till its over”. Sheridan&Co complemented this area further by creating a corner window display incorporating a TV featuring a pre-recorded 1Rebel video on loop visible at night, set amid chain-link fencing and steel metal frames, in keeping with the gym’s industrial luxe aesthetic. The video flashes between brand statements and evocative imagery to lure passers by inside.
Sheridan&Co extended its design to the tags and garment packaging for 1Rebel’s exclusive line of apparel and developed ideas in which these can be displayed. Freddie Sheridan, Director of Sheridan & Co, London comments: “1Rebel epitomises an irrepressible energy that simply bursts at the seams. Part of our challenge has been to create a visually impactful retail presence that communicated this unique brand identity and narrative through every little touchpoint. We needed to mastermind an approach that packed a punch without being too risqué; devise a mechanic that celebrated 1Rebel’s core point of difference without alienating the wider market. In turn we have created a look and feel that synergises with 1Rebel’s essence and identity – beautiful yet functional, luxurious yet accessible, disciplined yet free spirited.”
Sheridan&Co also played a consultative role in bringing together a strategic alliance between 1Rebel and another client, Roots & Bulbs for which Sheridan&Co designed visual merchandising elements for the Marylebone and South Kensington stores. 1Rebel now have a Roots & Bulbs juice bar situated at the entrance of 1Rebel’s St Mary Axe club with VM elements from neon signage to chalkboards designed by Sheridan&Co. James Balfour, Co-founder 1Rebel commented, “Working with Sheridan & Co has been a total pleasure. Their commitment and passion is second to none and the team spirit is infectious. We have been extremely happy with the detail and quality of work.”
1Rebel is scheduled to open up its second outlet in London’s Broadgate in August 2015. As with its flagship outlet, the space will incorporate high-end grooming and skincare products, designer sportsluxe retail zones and an organic cold-pressed juice bar for post workout replenishment. 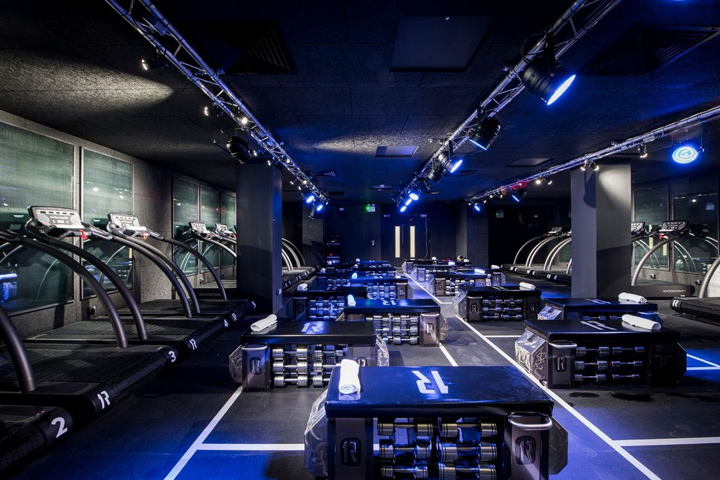 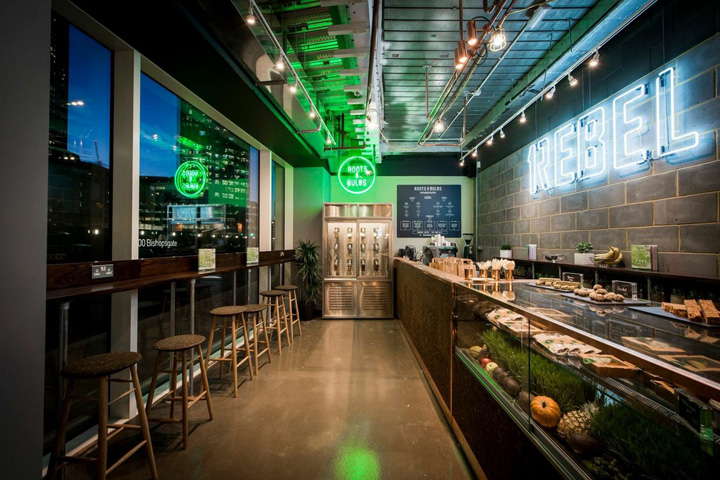 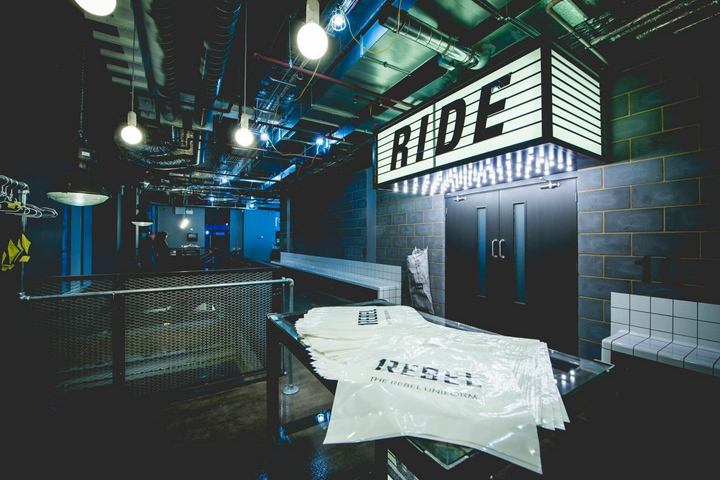 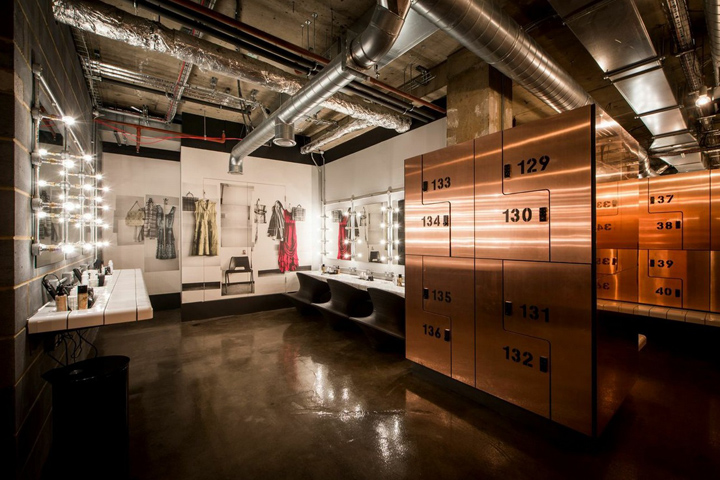 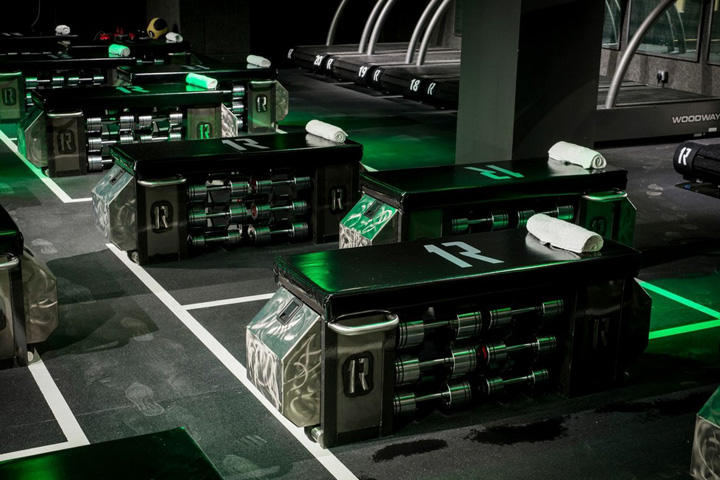 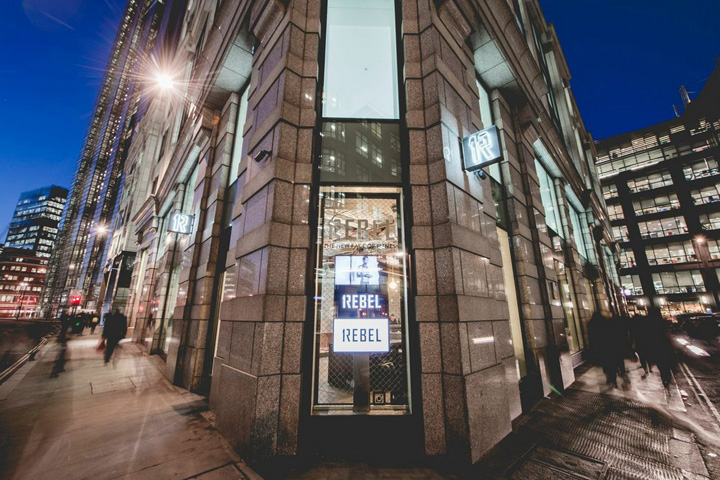 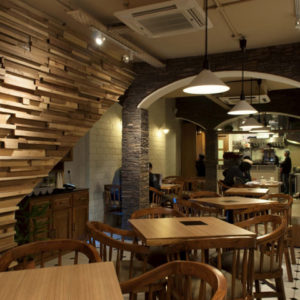 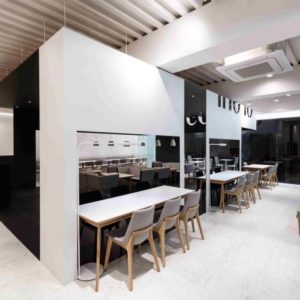