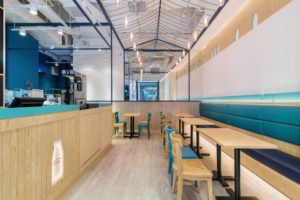 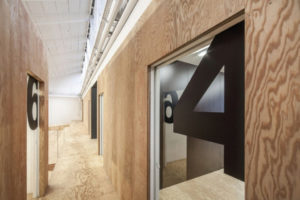 Beer exhibition at Spritmuseum by Form Us With Love, Stockholm – Sweden 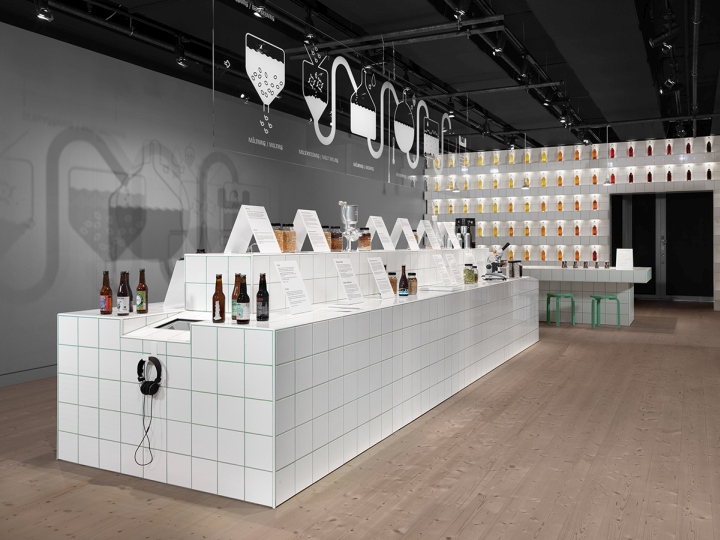 Stockholm studio Form Us With Love has designed and curated an exhibition at the city’s Spritmuseum dedicated to the culture of making and drinking beer. The number of breweries in Sweden has doubled year-on-year, according to Form Us With Love. The studio’s Beer exhibition capitalises on this growing trend, aiming to provide information about different types of the alcoholic beverage and how they are made. Designed for both amateur enthusiasts and seasoned connoisseurs, the exhibition presents simple and in-depth facts about the history, culture and tradition of Swedish brewing. “We invite the public to learn more about what it takes to makes one beer unique to another,” said Anna-Karin Svanberg, producer at the Spritmuseum – which is located in a former naval building near Stockholm’s Djurgården park. “By creating an educative environment, we encourage people to be curious – smelling, feeling and distinguishing ingredients and methods that formulate the many recipes on display,” she added. At one end of exhibition space, display stands arranged in a grid are lined with industrial white tiles separated by green grouting to create the appearance of a laboratory. “Inspired by labs and ateliers, the intention is to make the audience investigative and engage with the process of how to find formulas for beer success,” said Form Us With Love. Low-hanging spotlights are suspended from the ceiling above each podium, highlighting the beer-related objects. Some of these objects are housed within glass vitrines, while others are left exposed. Above an elongated central podium, a simple infographic describing how beer is made is printed in white onto a transparent plastic sheet. Two tiers of bottled beer and the raw ingredients used to make it are positioned beside information cards describing the nuances of each. “We wanted to illustrate dimensions of observation and experimentation by combining clinical materials and theatrical lights,” the studio said. The back wall is also covered with the white tiles, where single beer bottles arranged from light to dark are tucked into individual niches. A tasting table that can be used during organised workshops sits in front of the full-wall display, surrounded by green-coloured Stool 60 designs by Finnish Modernist architect Alvar Aalto. “During the exhibition we will host beer tasting seminars, where you get the chance to try oddities such as sour-beer and the world’s strongest beer,” said Nadja Karlsson, a beer expert at the Spritmuseum.

The exhibition opened last Friday during Stockholm Design Week and continues until 17 January 2016. 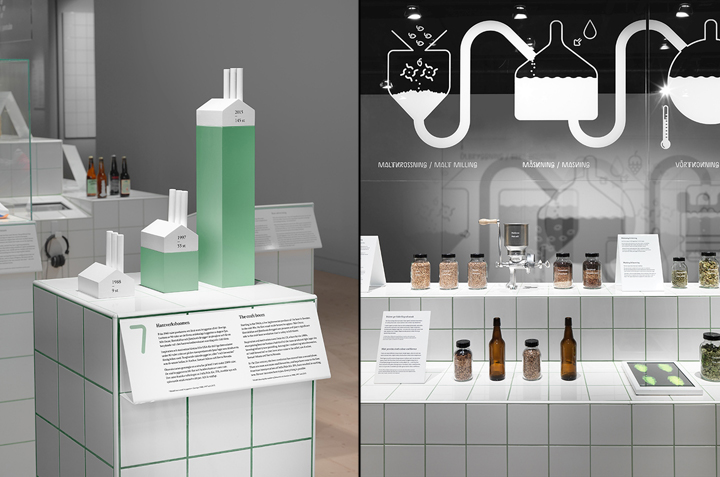 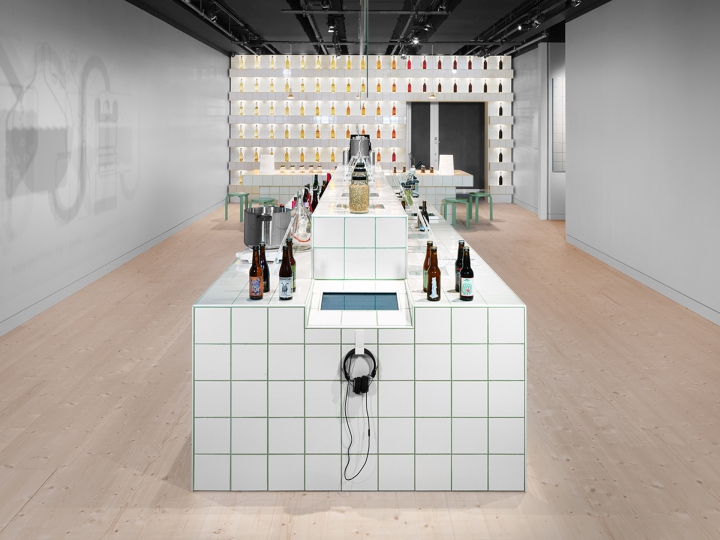 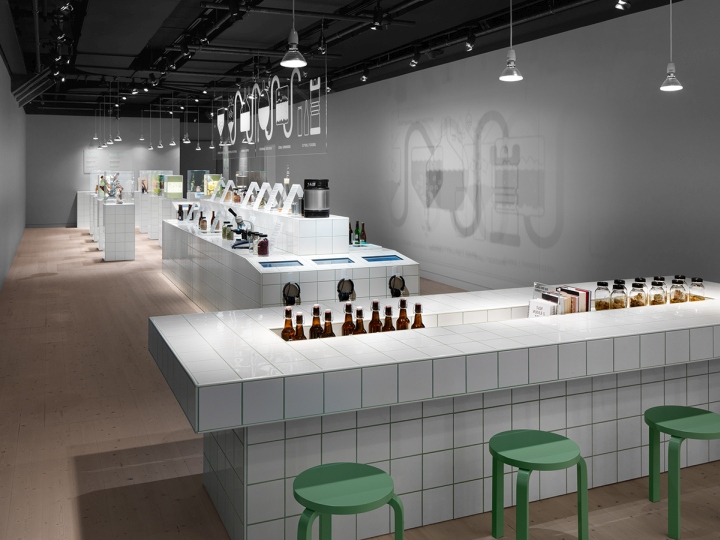 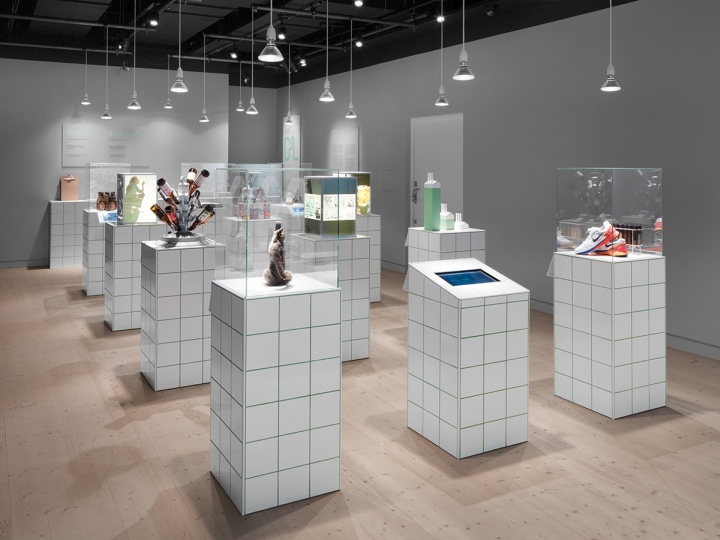 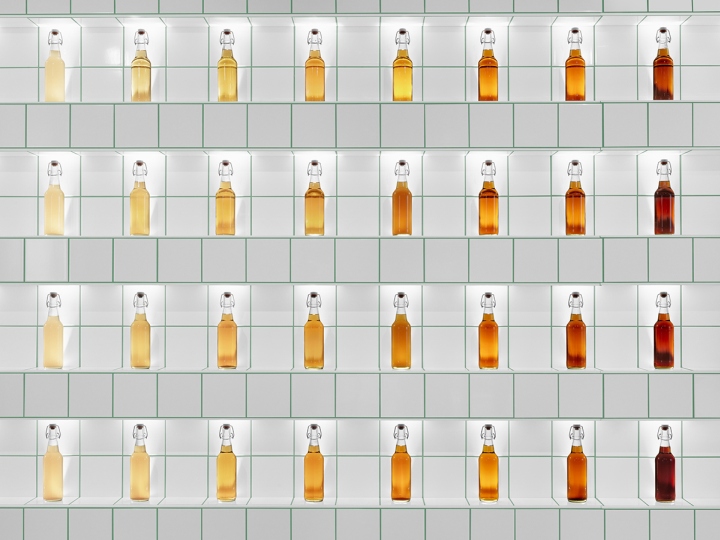 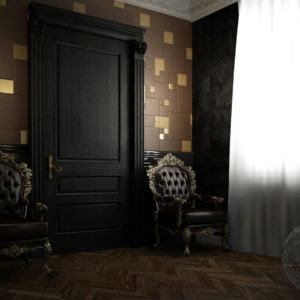 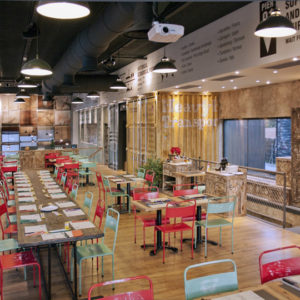 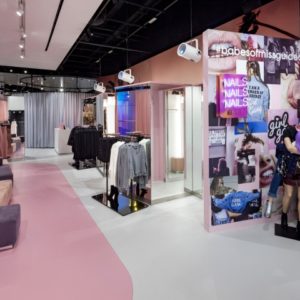 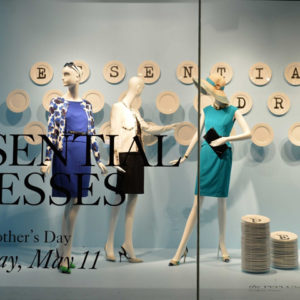