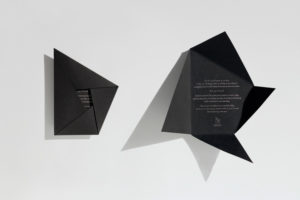 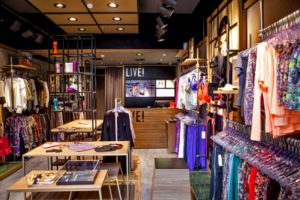 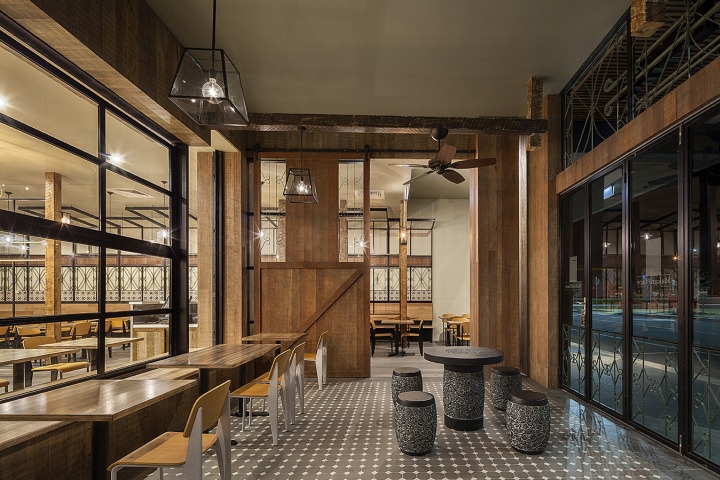 The enlarged traditional wooden gate contrasts with the lightness of the space, yet allowing curiosity and indirect preparation as one steps into the restaurant.

Makan Place is an interpretation Old Malacca during British colonialisation. With mainly Chinese-Malay inhabitants in Malacca that formed the norm of traditional dwelling, the Colonial government added a touch of European style that intertwined with the implemented cultural depiction of the city’s vernacular architecture. The formulation of traditional space in Old Malacca consists of a ‘five-foot-way’, transitional entrance and an internal courtyard, with a hint of European essence. These features from differing cultures create a blend of sophistication to the standard residency. Makan Place emphasises on the ‘five-foot-way’, which was a unique feature of Malaya’s shop houses that was stipulated by Sir Stamford Raffles, the governor of Old Malacca, to have walkways that protect pedestrians from the hot tropical sun and rain. The restaurant’s entrance adopts this distinct characteristic as to shape suspense and patience upon entering. The modern Malaysian vestibule provides an introduction to the warm ambience through the extensive use of timber in various shades, as well as tilt-up and louvered windows that frame the interior and exterior views as a form of dialectic style between customers and the space. Amongst the walls is an intricate motif that is repeated throughout the restaurant, to portray the aspiration of European influence. The tactility of timber columns with its natural aged wood grain pattern enhances the traditional atmosphere of Malacca that is embedded in its history and culture. The central courtyard is resembled through the transition of different flooring material, with increased ceiling height to further accentuate the colonialist ambience. The entrance exhibits the defining quality of Old Malacca, with the trishaw that cordially invite people whilst the steel-frame windows unveil the delicate tactility that is anticipated before entering the restaurant. The symmetry of the central space, surrounded by custom timber columns to reflect the finesse of craftsmanship. The round stone tables and chairs are heavily embellished to emphasise the European and Chinese-Malay influence. The trishaw appears again to recall the story; the episode that lived once in this sophisticated township. Transparency is evident through windows that act as walls at the sides of the space. The careful placement of plants marks the concept of ornamentation used in the restaurant, as it is extracted from nature. The greenery provides balance by adding brightness to the neutral hue of the entrance. The tiles on the walls embrace the distinction of European motif sculptured in steel. The black, minimalist frames represent window openings of Old Malaccan houses. The contrast of the overall restaurant’s horizontality and vertical timber cladding are harmoniously responding to each other. The existing canopy uses thin timber blade cladding that adheres to the façade, creating various timber textures to form a coherent landscape. The composition of the overall space is represented through the columns that generate the corridor, to enhance transparency inside the restaurant, as well as allowing circulation. The continuous timber bench attached to the wall is a classic touch to complement the timber features; these include the furniture that corresponds to the colour palette. The courtyard is framed by silhouettes of traditional lanterns; the use of thin and linear steel for its structural design to create a sleek and sophisticated perception. Green ceramic brick tile was a popular shade for Old Malaccan tiles, and is used for the countertop and the bar. The vivid focus on the tile texture is aided through the minimalist and linear suspended shelf where the cups and glass are placed. The glimpse of the exterior view through the windows contributes to the conversation of the design and the people. From the outside, people are able to absorb the presence of the detailing from afar. 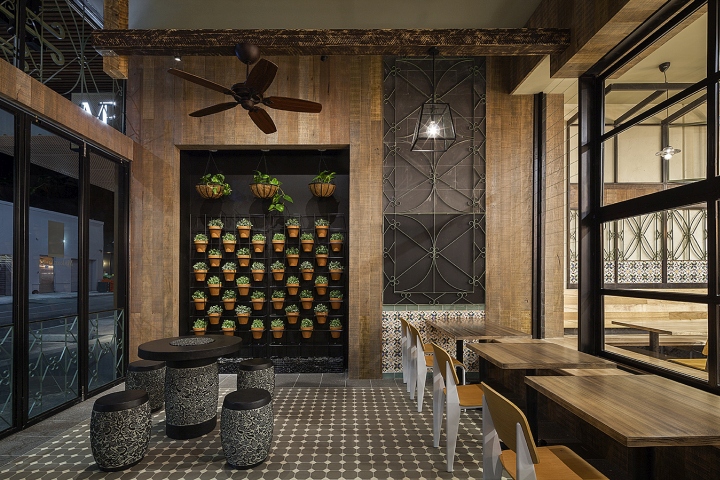 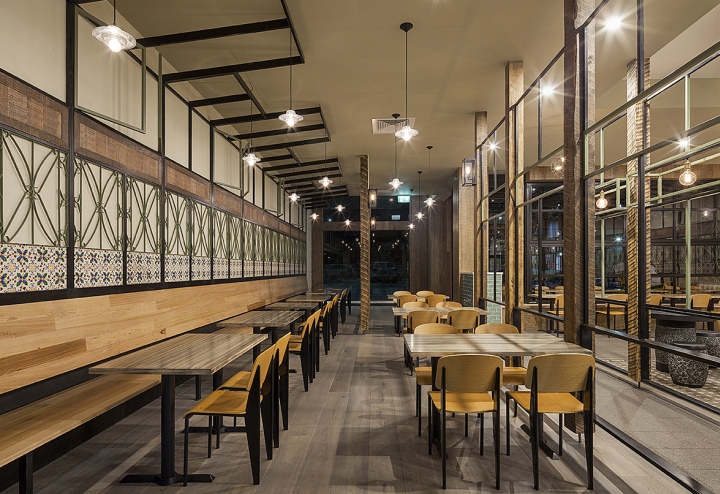 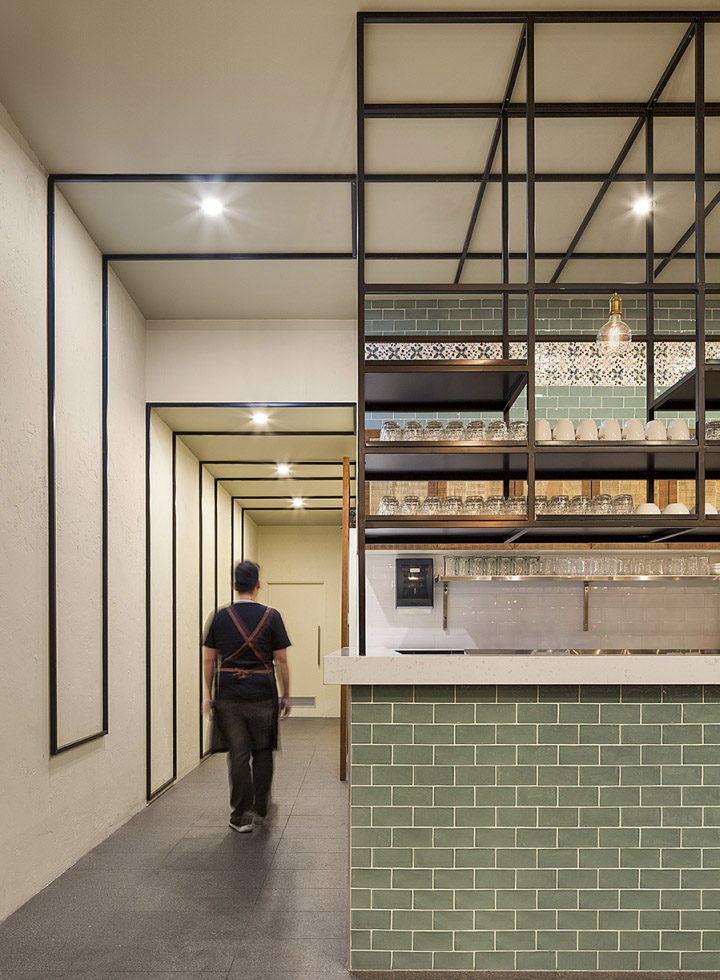 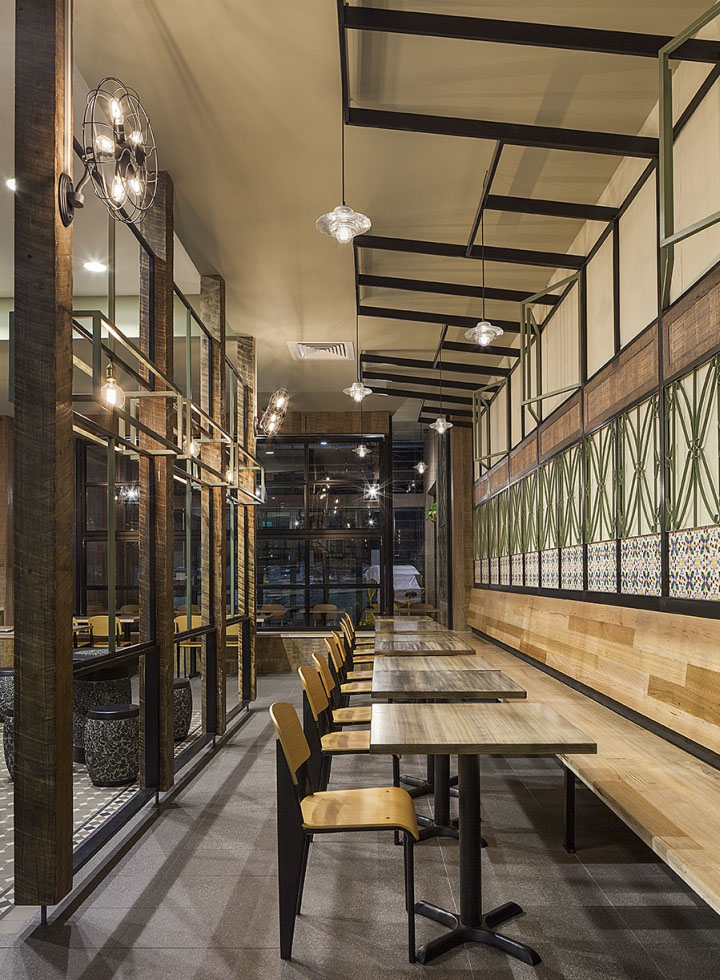 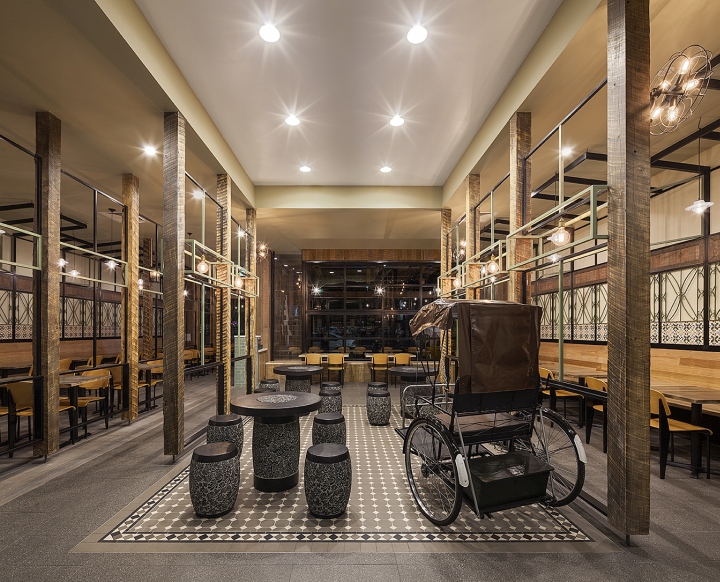 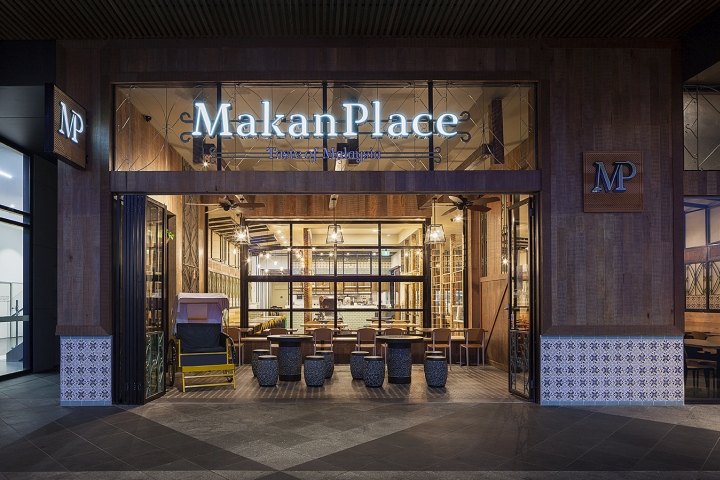 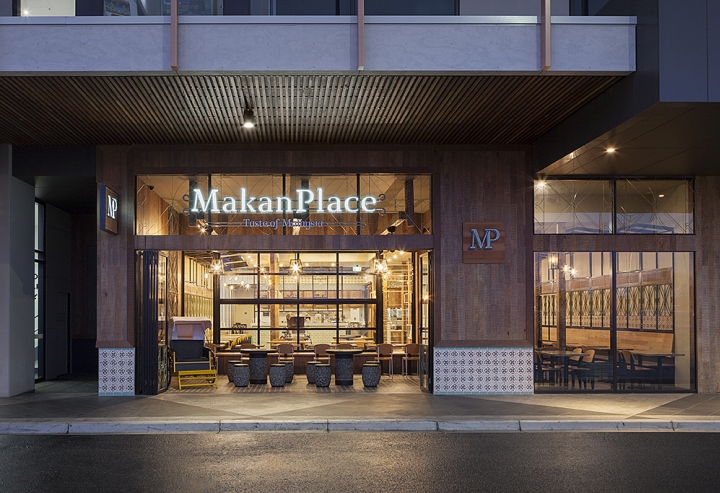 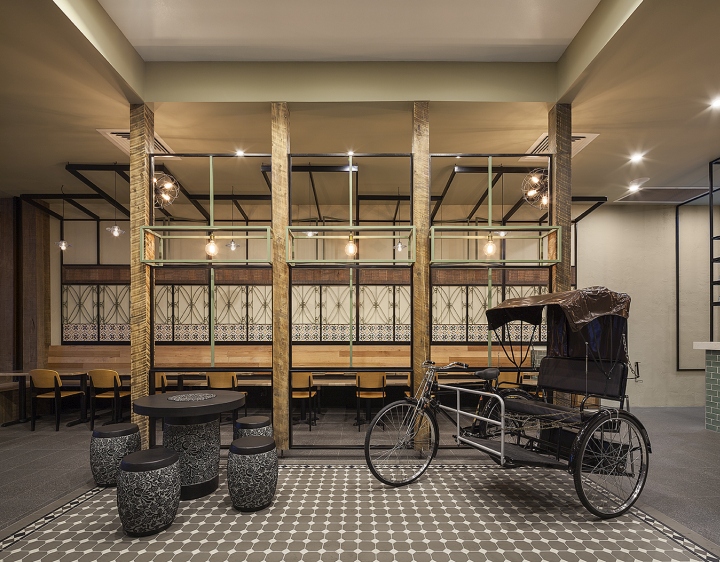 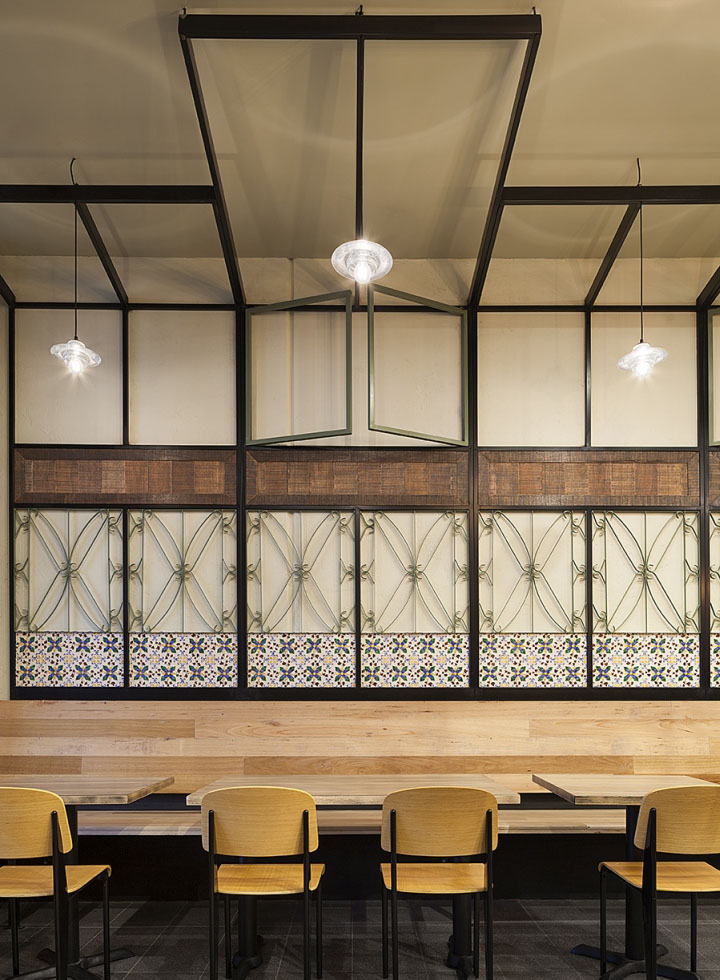 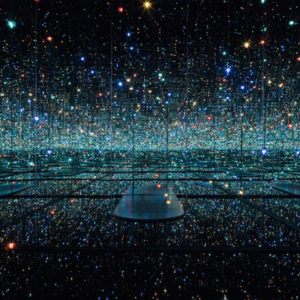