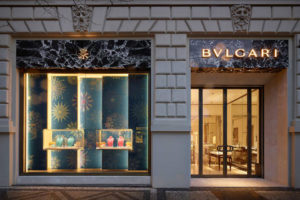 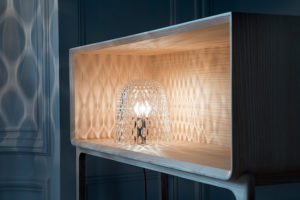 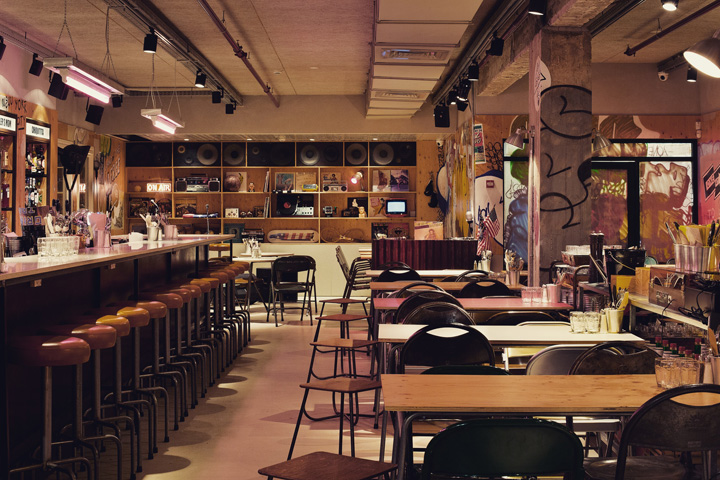 The “America” food court was planned and designed by us at the Z.O.A. House in the center of Tel Aviv. It includes and American restaurant serving “soul food”, a Mexican-American style Taco stand, a bar, a café and a bakery, spread across 400 square meters, with an adjacent yard in an area of 600 square meters. The Z.O.A. House has been a center of culture in Tel Aviv for a very long time. It was built in the early 1950s and was one of the first culture centers of its kind in town. We’ve turned the space that was allocated to us into a nonchalant and cool place, reminiscent of its American source, and most importantly – with a simple and rough hipster vibe. Visitors are welcomed to the court through a lobby with an accessories stand, inspired in its design by classical American hostel lobby counters. The same lobby separates the open kitchen from the main dining area. American Plywood, originally used for wood construction, is a recurring motif. The walls in the area of the restaurant are covered with plywood boards, decorated with the work of some of Tel Aviv’s leading graffiti artists. We’ve also used plywood as the main material of the furniture. The accessories stand, tables, stools, cabinets, waiter stations and many other pieces of furniture are all made with the same wood. The area of the restaurant includes the Taco stand and bar, as well a performance area and sitting tables. These dining tables are designed with plywood boards and rudimentary iron legs, similar to its source of inspiration in 1950s New York and Brooklyn. The tin and plastic chairs and stools are also designed with the same inspiration. The bar is made of rusty iron and a mosaic platform overlooked by unique lighting fixtures. The use of rusty iron in the design of the bar, and the lighting fixtures made of galvanized steel studs, originally used to build plaster wall frames, are intended to provide a sense of rough simplicity, while the mosaic is reminiscent of its New York origin. The result is a ragged American bar. Further down the hall, towards the performance area, we’ve designed a DJ station made of rusty leftovers of corrugated steel sheets, to give a feeling of randomness – as if it were put together from the leftovers on a construction site. The accessories we’ve brought from Brooklyn warehouses and the dismantled speakers also contribute to the sense of randomness, and are combined with a shelve cabinet along the performance area. Outside of the space there are two yards. In the courtyard between the restaurant area and the kitchen, we’ve created a garden with similar furniture to the restaurant, in order to give a sense continuity between indoors and outdoors. In the large yard on the opposite side of the restaurant, we’ve placed a nickel truck to be used as an American café and bakery stand. We’ve also designed a sitting bar in the yard, made of concrete and iron, with adjacent picnic tables brought over from a Brooklyn beer garden. At the edge of the yard we’ve put a small pool surrounded by colorful beach chairs, with a galvanized steel wall in the background, decorated with the American flag in the style of 1950s kitsch. That’s how we’ve created a simple, ragged and unapologizing place, that’s close to its source. 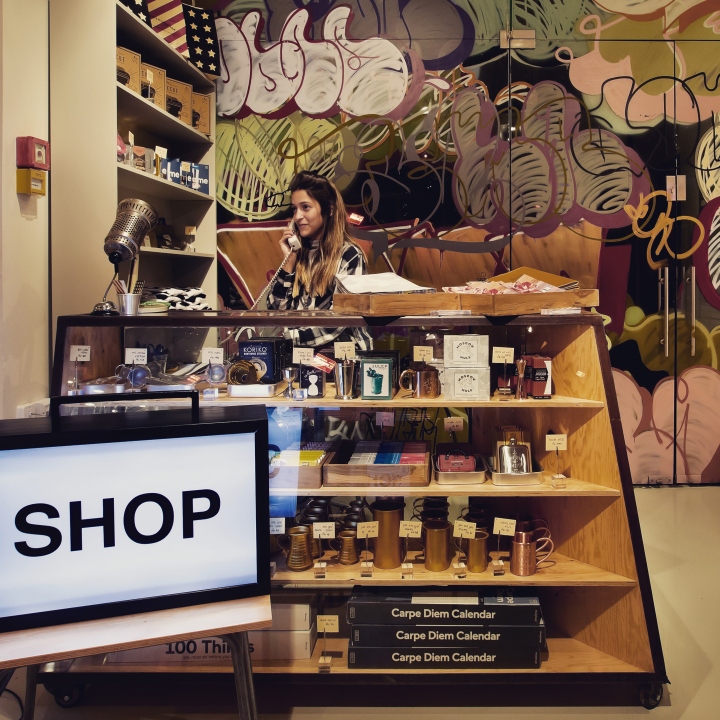 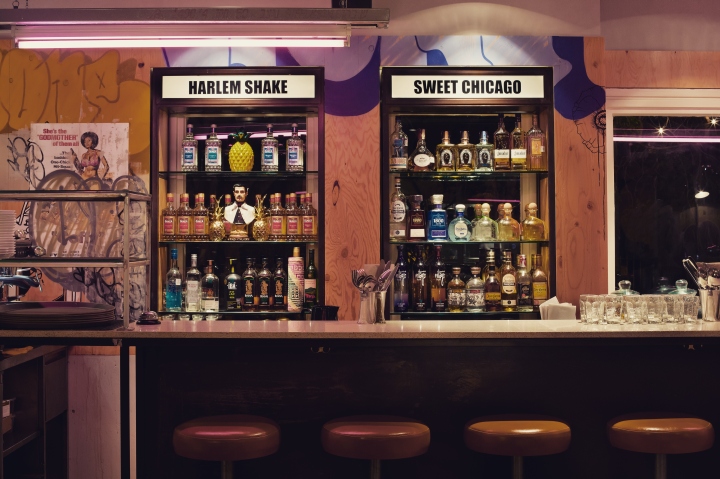 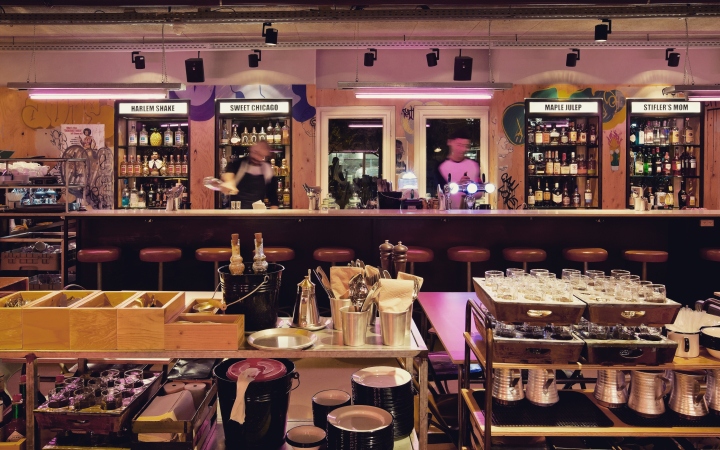 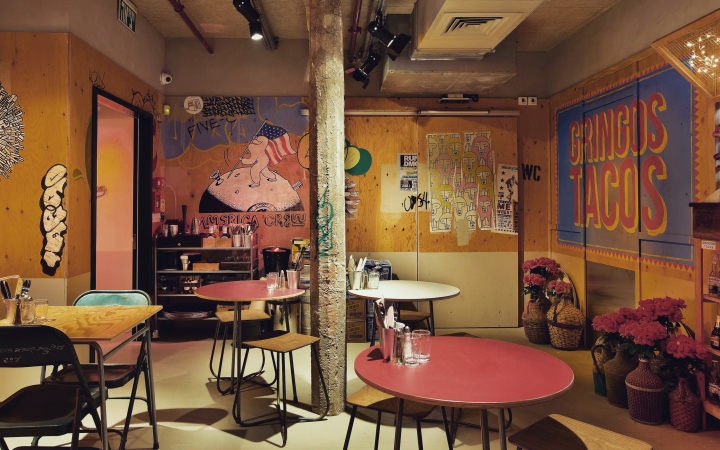 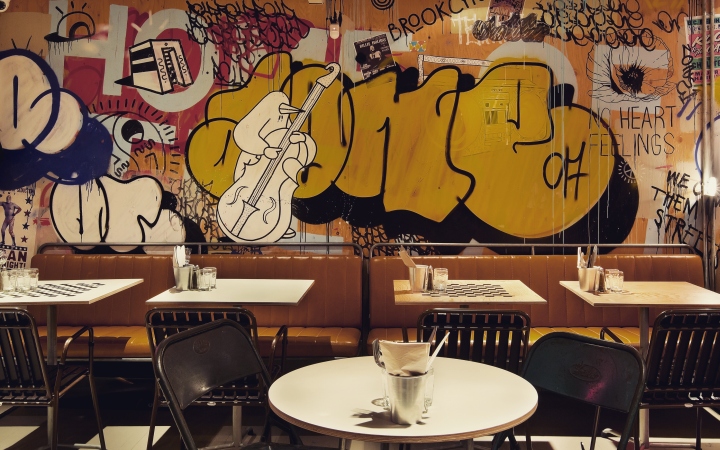 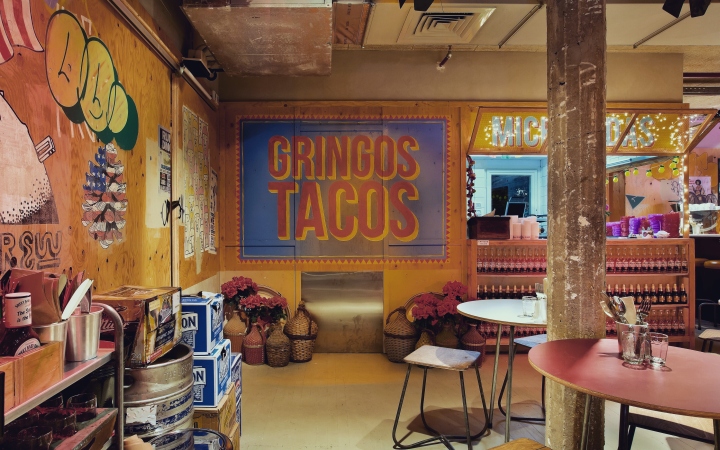 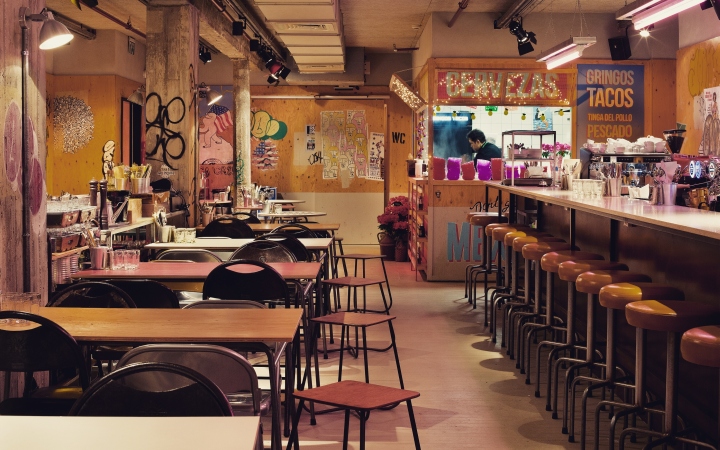 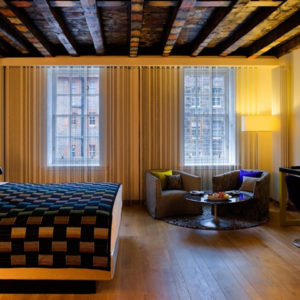 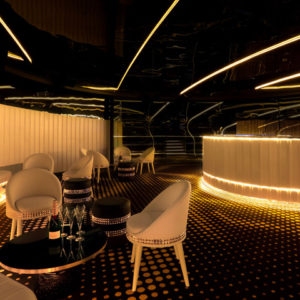 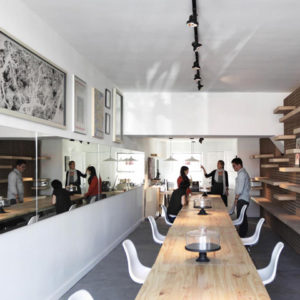 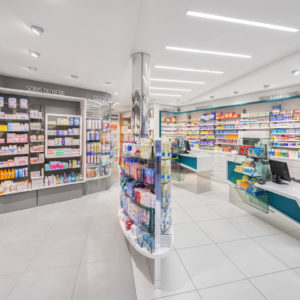