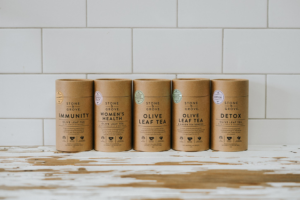 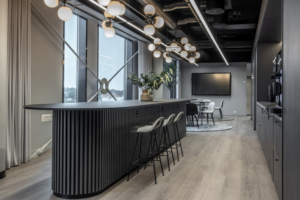 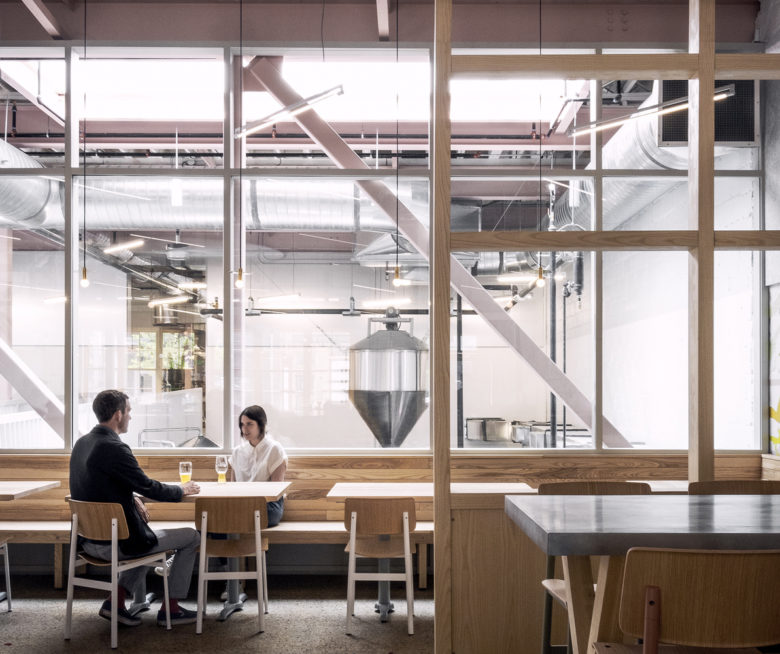 In the Leslieville neighbourhood of Toronto’s east side, Avling Kitchen and Brewery occupies a building that was initially constructed as an A&P Grocery Store in 1949. But in recent years it was used to grow bean sprouts.

“When we first saw the space, a lot of it was closed off refrigeration with growing beds. There were drains cut into the floor and the whole thing was really dark and wet” says Vivian Lee, one of the partners of LAMAS, the architects responsible for designing the space.

The easiest aspect of renovating the space was to add light. The architects opened up the street facing windows with oversize double hung wood windows and cut a crosswise opening in the roof to provide ample daylighting at the midpoint of the very deep infill building.

Other aspects of the renovation weren’t quite as simple. James Macgillivray, the other half of LAMAS elaborates, “The buildings foundations and roof structure had originally been built for use as a supermarket in the first half of the 20th Century. There was storage in the basement but nothing like the 22,000 litres of liquid that we were required to house there. Not to mention the fact that large sections of the ground floor slab had to be removed for the 16 foot tall, 4,000 litre fermentation tanks, or that on top of everything, the client had planned on installing a vegetable garden on the roof.”

The increased roof loads and general lack of lateral stability due to the mezzanine cutouts led Blackwell engineers to almost double the steel in the building. Beams were added between each existing one, allowing them to keep the old 2X10 wood framed roof above. Diagonal cross bracing was also added on the line between the restaurant and the brewhouse. “We knew there would be a lot of extra structure so early on we worked with Blackwell to make sure it added to the spatial definition of the restaurant, designing it as a series of diagonals, emblematic of a truss.” explains Lee.

The structural work was essential to the building due to the central role that the roof garden had in the concept for the brewery and restaurant. Max Meighen, the owner and founder of Avling explains, “I had always conceived of Avling as a brewery that was connected to the farms and farming in Ontario; the name Avling is norweigian for harvest. And the roof garden is an integral part of that concept, allowing us to grow ingredients not otherwise available, redirect waste water from the brewery for irrigation and engage in with the wider community. It is a place where we can make concrete our beliefs and ideals about the restaurant business and wider food industry. We are constantly seeking ingredients for our beers that are well suited to brewing, but would otherwise be overlooked or discarded. Unsold bread from the restaurant and grains planted as a seasonal cover crop are two great examples.” And of course the roof garden supplies the restaurant with vegetables as well.

The devotion to the concept of growing and processing food on site extends even into the basement, where the restaurant has instituted a resident butcher, house made ferments and of course their own beer lab where they test out new seasonal and small batch brews. They have even invested in oak barrels. Meighen explains, “Each barrel is 500 litres or one batch. So we brew three different beers to go into our 12 barrels and each one is designed to have a different quality like heightened acidity, more prominent yeast character, etc. As they age, we can blend the different batches to create something that is complex and unique to Avling.”

Macgillivray describes how the farm centered concept influenced the design process, “We had worked on agricultural projects before and what resonated with us, especially relative to the restaurant program, was the notion of crop rotation. That is having different fields and then rotating the crops through them to keep the soil healthy. We thought this was a fitting analogy to how the restaurant could place different groups of users, depending on the time of day and what they wanted at the time. So we organized our fields as quadrants around the central figure of the bar.” The four “fields” of the restaurant are all slightly different: one set of banquets overlooks the brewhouse, the other the street, the high tops on one side with felt panels above have their opposite in the low tables with felt panels at table level.

Primary among these different places in the restaurant is the mural by Madison van Rijn which covers the top half of the west wall and the bottom of the east. Van Rijn explains that the mural was “inspired by an examination of Canadian geography and the foundations of nature. It’s a traditional aerial landscape but became an abstraction as I explored the connection between humans and the earth, the complexities of soil and land, and the relationship between colour and emotion. It evokes feelings and memories of heading to the Ontario countryside for a breath of fresh air. Freedom. Happiness. Nostalgia.”

Lee says, “We were so excited to work with Madison. We had never collaborated with an artist before but we had seen some of her work around Toronto and were really inspired by it as an aesthetic and the potential that it had for Avling specifically. For example, early on we mentioned that we wanted to paint all of the structural steel pink and she totally agreed, saying that for her it can be used almost as a neutral colour. That idea of neutrality in the design is something that we really wanted, something that could have feeling and expression but also be inclusive and light.” 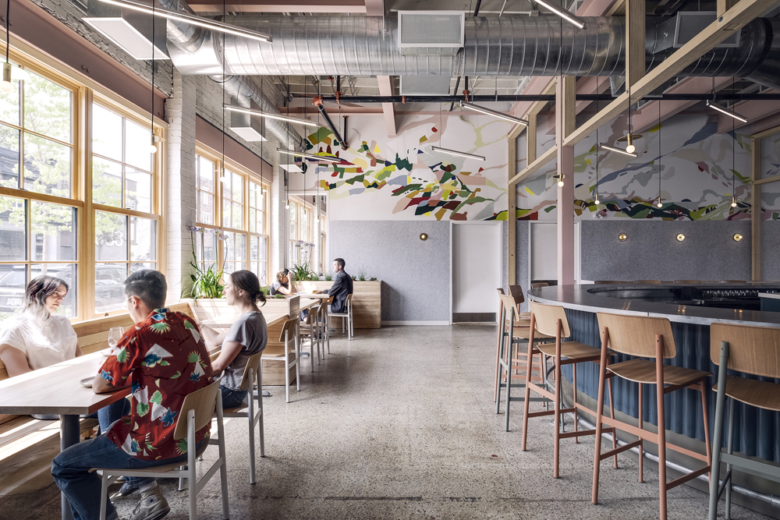 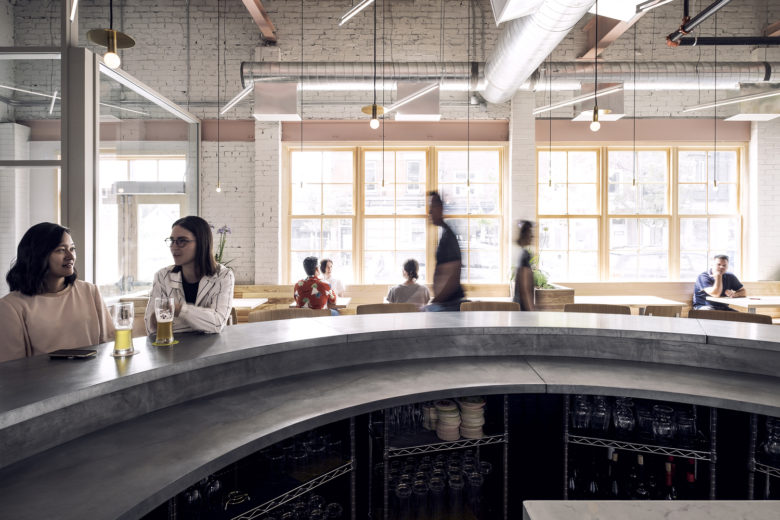 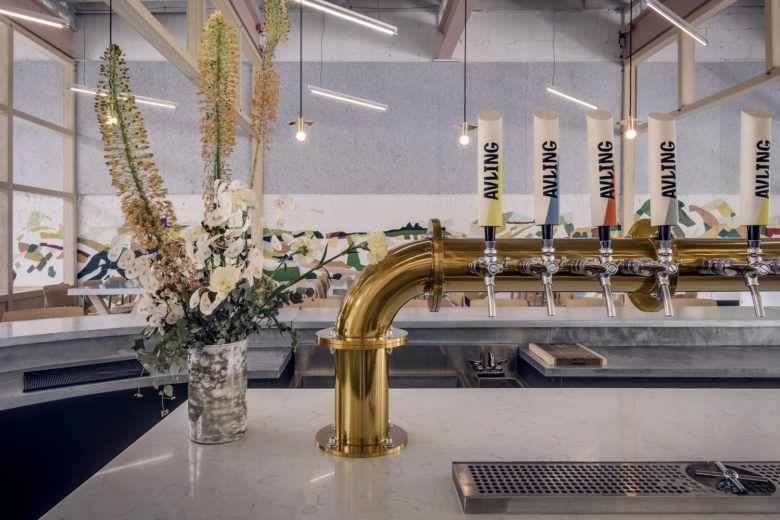 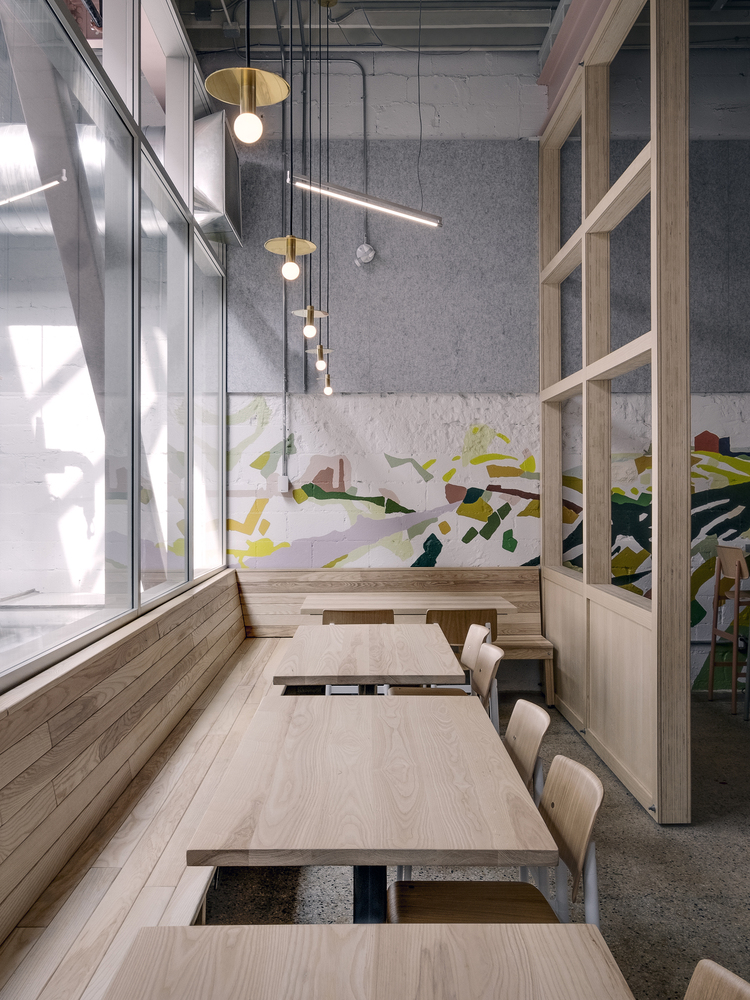 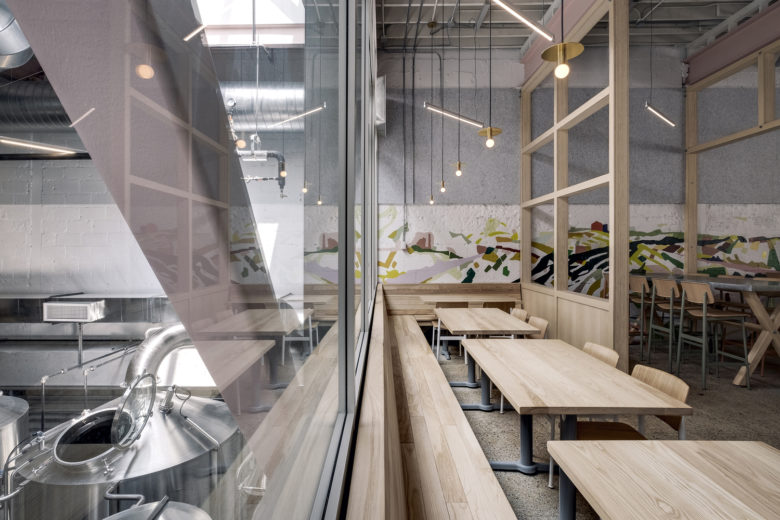 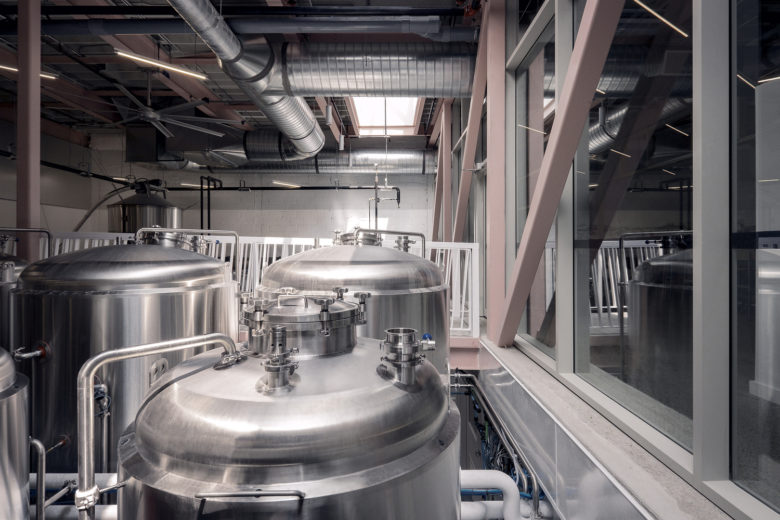 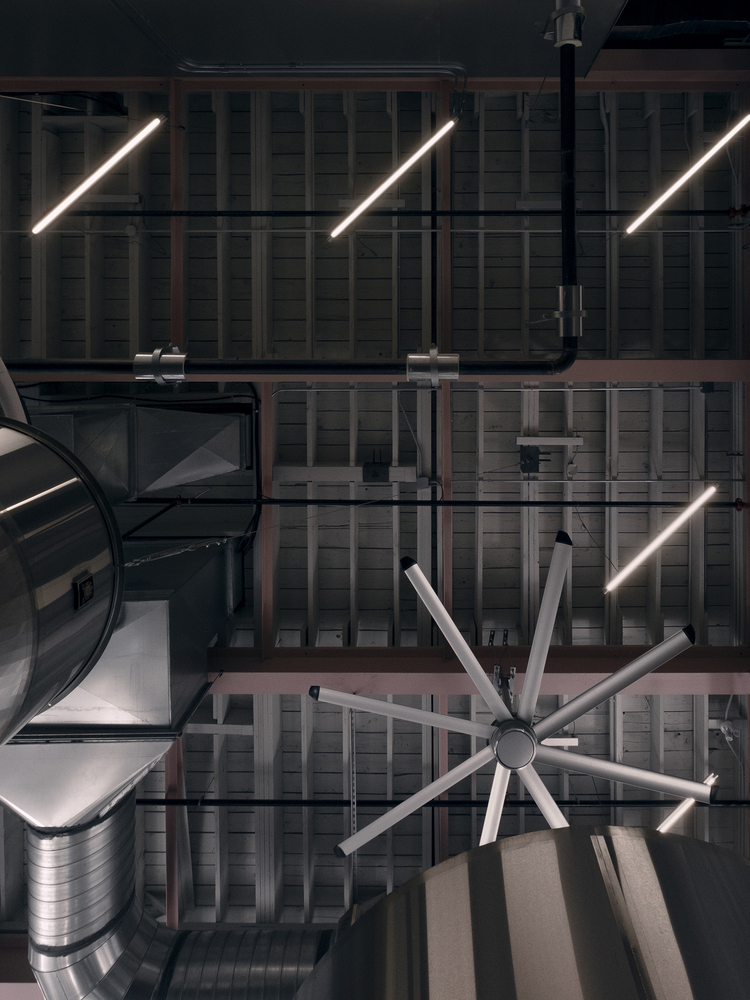 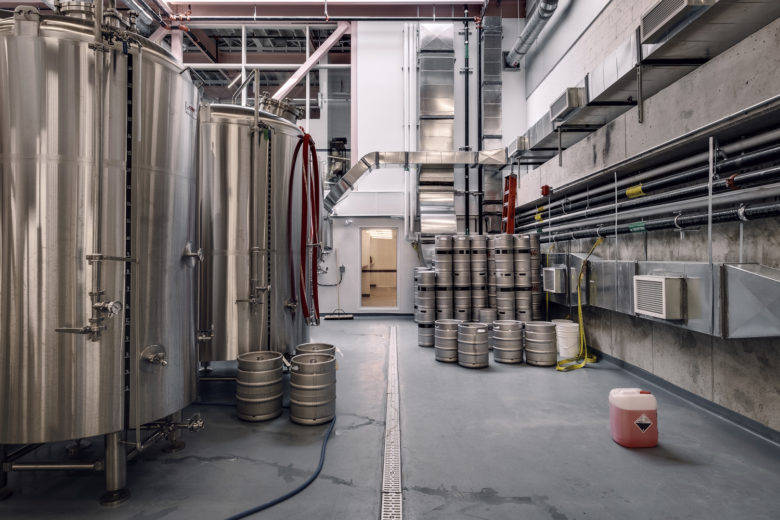 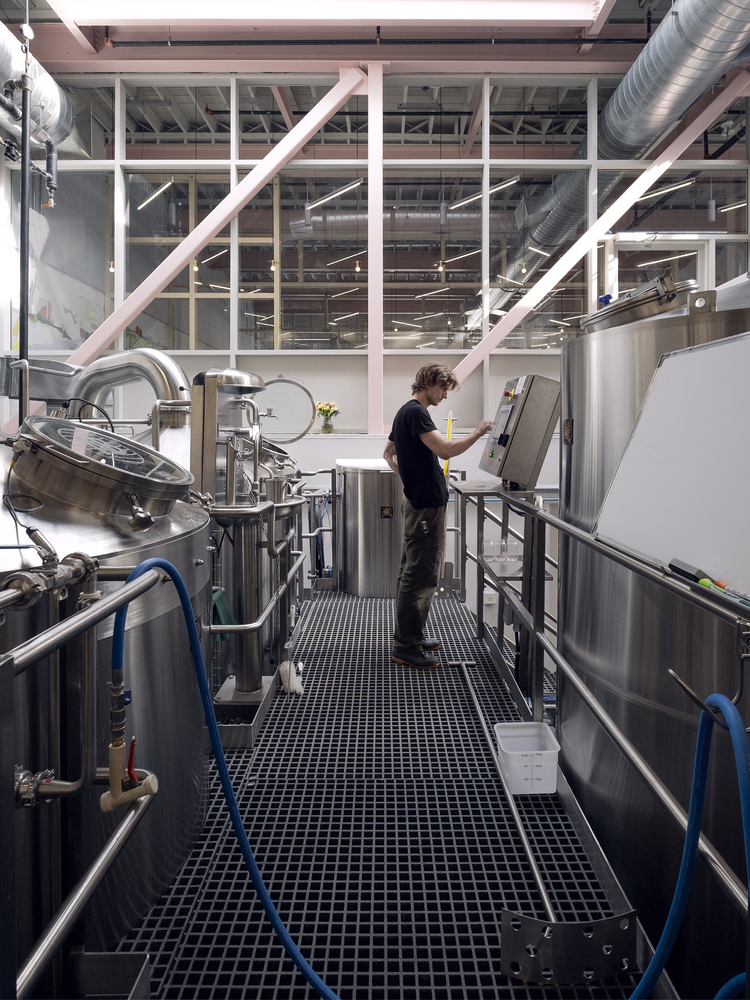 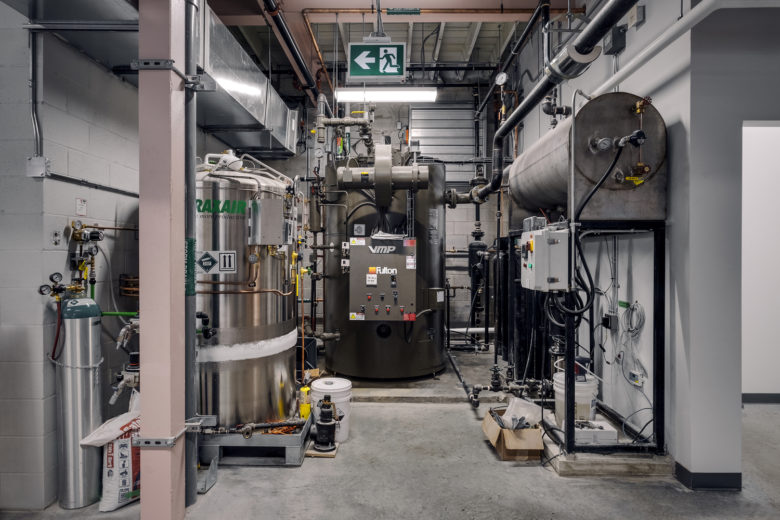 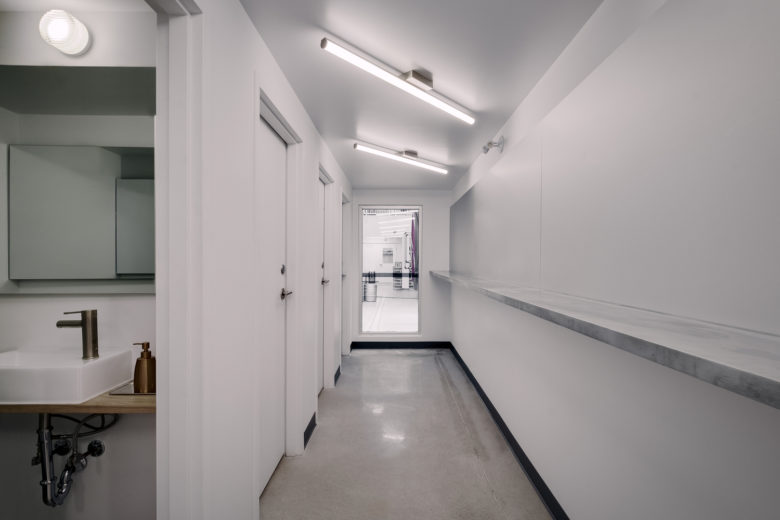 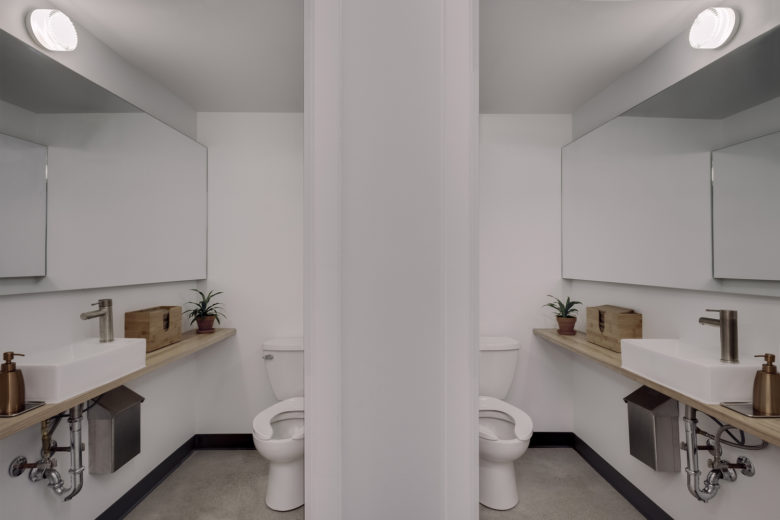 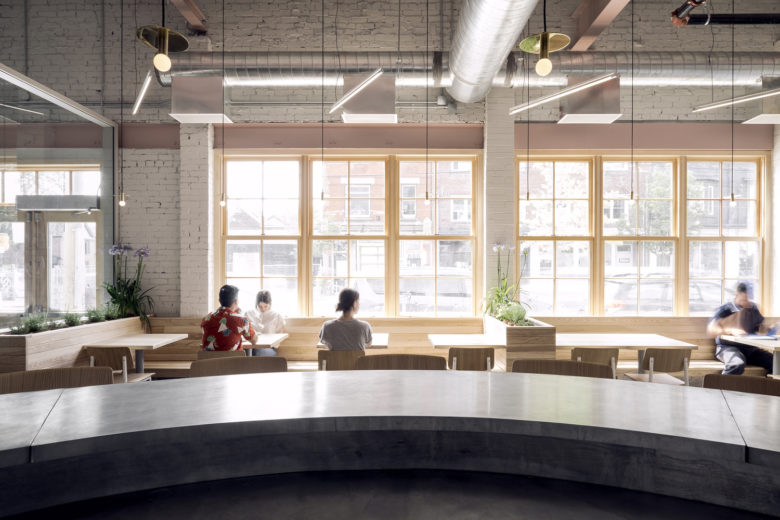 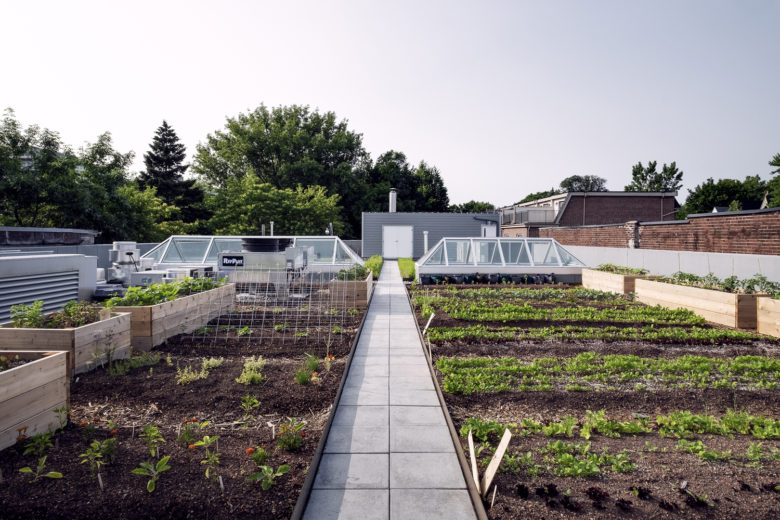 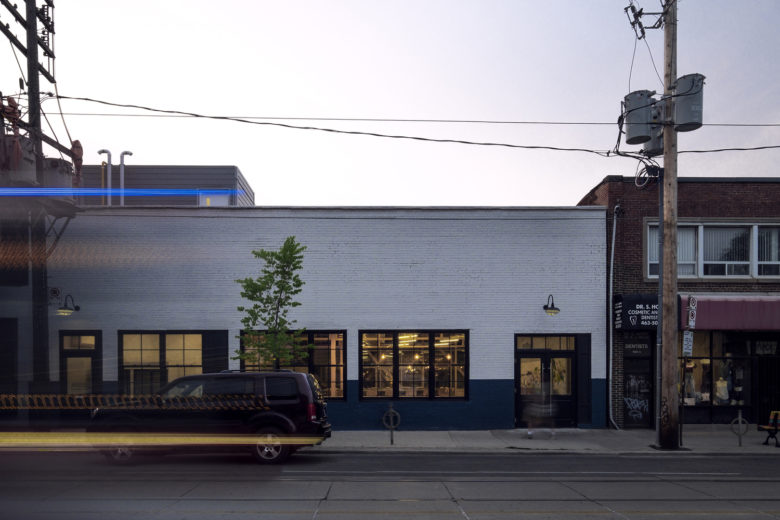 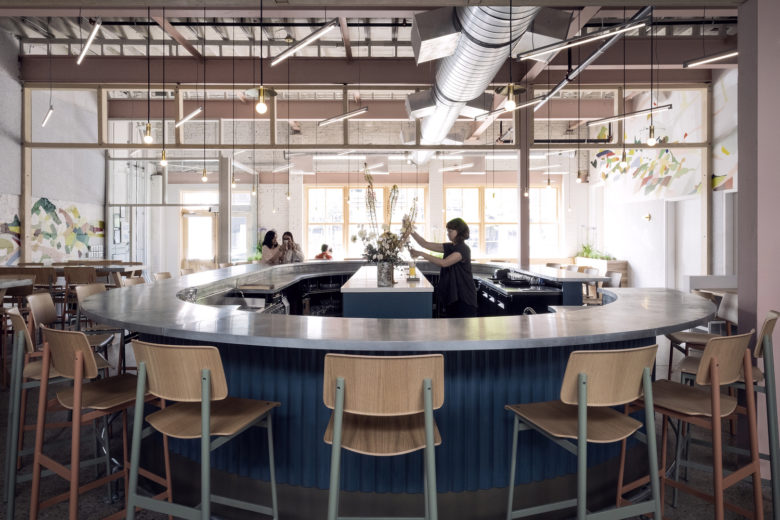 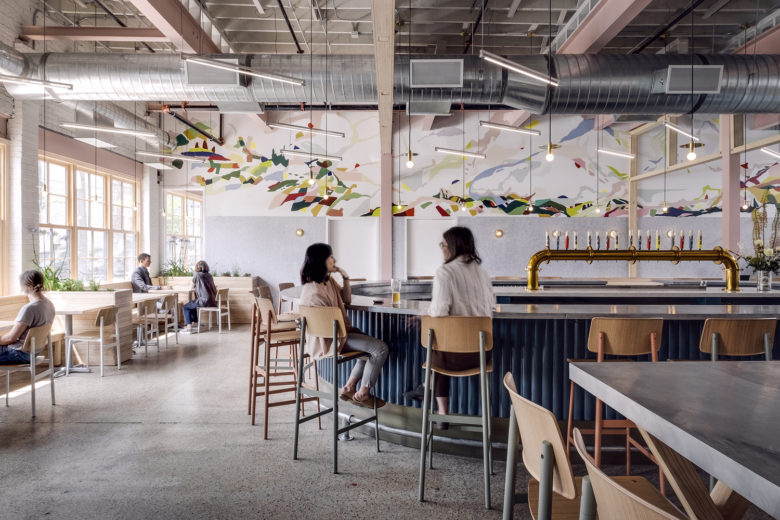 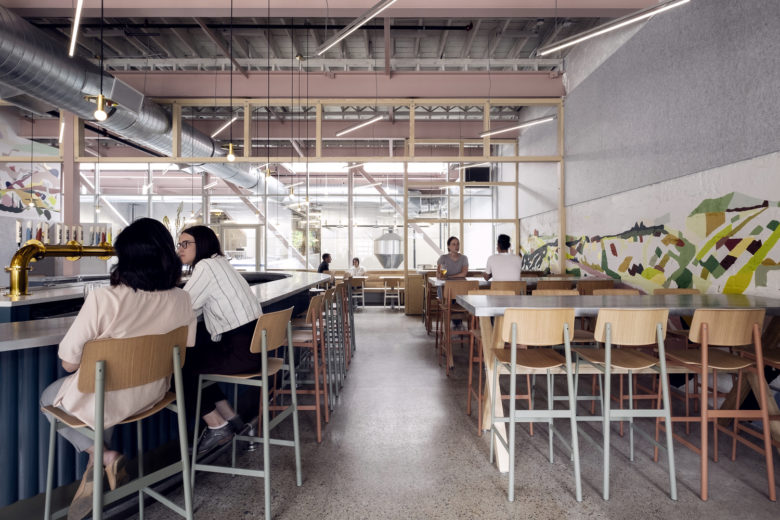 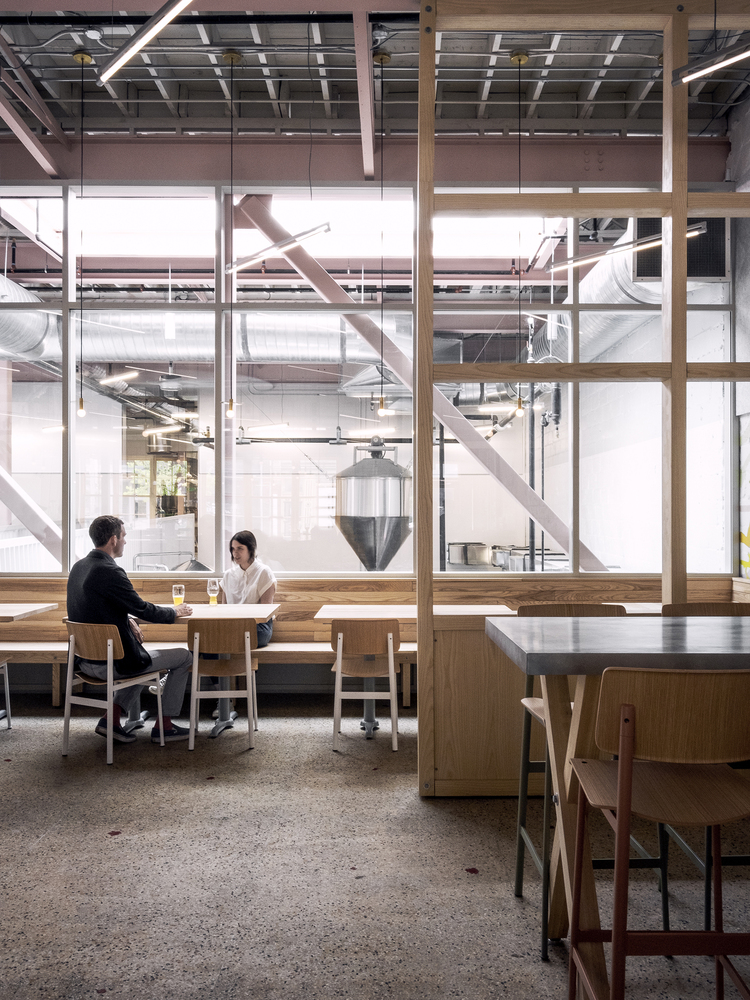 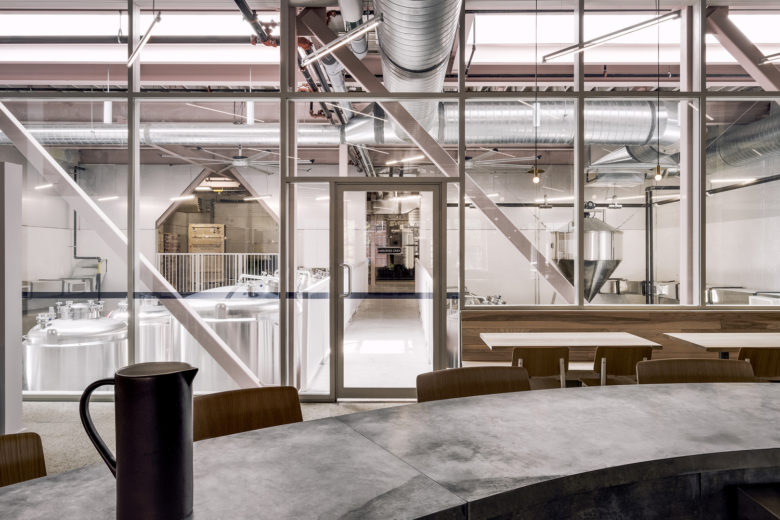 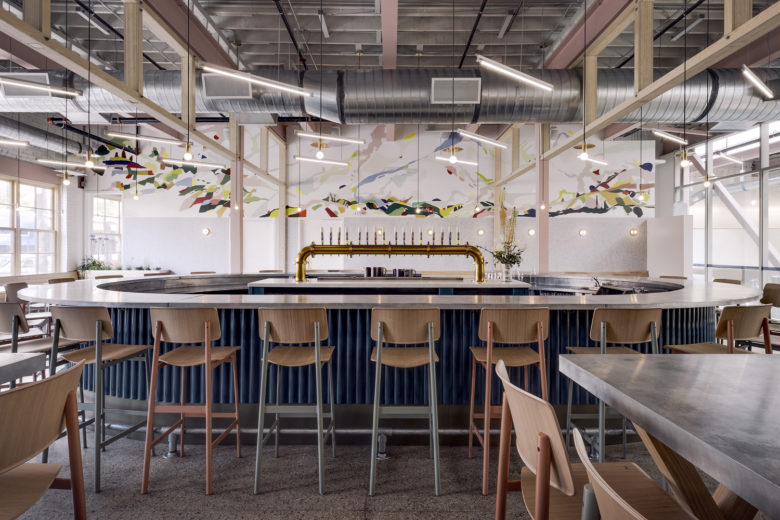 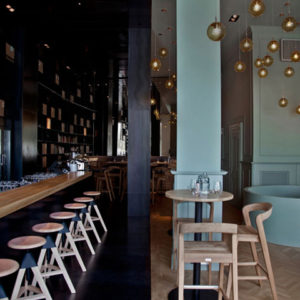 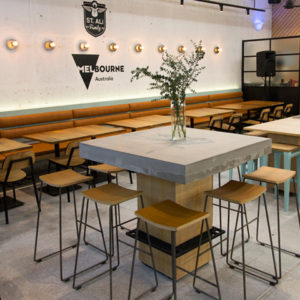 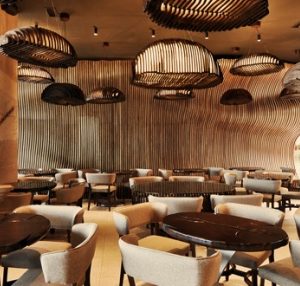 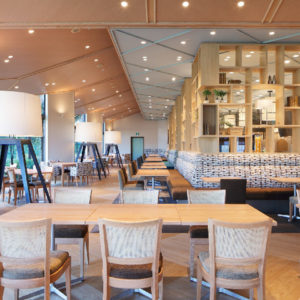