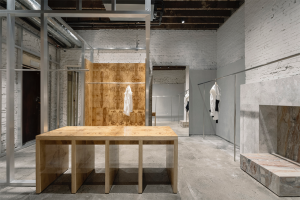 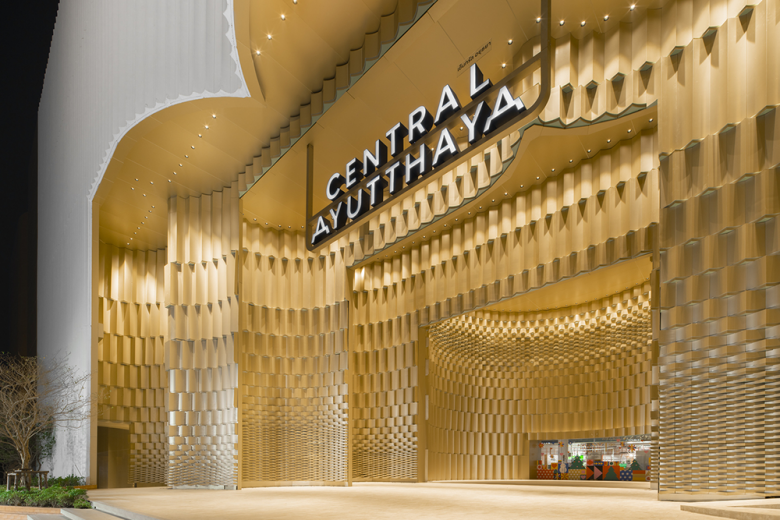 The brief of Central Ayutthaya is for Onion to design the facades or “faces” of a mixed-used project situated on Asian Highway 1 in the old capital of Thailand, Phra Nakhon Si Ayutthaya. That includes the facades of shopping centre and tourist attractions such as Ayutthaya Interactive Gallery, exhibiting the history of Ayutthaya through digital platforms. Onion thinks of the facades of Central Ayutthaya in terms of spaces in-between the inside and the outside of the buildings. This intention is important to the design process.

A facade has its own three-dimensional space, width, height and depth that hold the precast concrete walls exposed to the exterior, main and secondary voids, other cladding materials and structures. The facades of Central Ayutthaya should somehow symbolise the memory of Phra Nakhon Si Ayutthaya that is appropriate for contemporary life and the future project development of Central Pattana (CPN).

Onion has two design inspirations from the memory of Phra Nakhon Si Ayutthaya, namely a three-dimensional geometry named chom hae traditionally applied to the design of chedi, an alternative term for a Buddhist stupa mainly used in Thailand and the materials seen in the older part of Ayutthaya, local bricks, white painted plaster and gold. Onion studies a geometrical figure of chom hae and re-design it to become new sections of various building materials built by contemporary techniques of construction.

The main precast concrete walls painted in white colour are the real walls without any other decorative elements except the new sectional pattern on the wall itself. This helps CPN to lower the cost of construction, in comparison to the doubled layers facade. The new section of chom hae is also applied to the ceiling of the drop-off and the recessed walls at the main approach of Central Ayutthaya that parallels to Asian Highway 1. The material of the drop off and the main recessed walls are the same. It is aluminium sheet in gold colour, designed as an installation to underline a mode of applying new geometrical patterns to a large-scale-shopping centre.

The building height is 23 M and the overall proportion of the main facade is 1:3 horizontal rectangular so the length of the white precast concrete wall is around 69 M. The main facade is huge and long in comparison to human scale. We set the main approach of Central Ayutthaya based on the composition of square geometries within 1:3 horizontal rectangular. The gold recessed aluminium sheet walls are built in the heights of 10.20 M, 9.80 M, 8.40 M through to the height of 2.55 M.

The gradation of geometrical modules is to create a three-dimensional effect of concave spaces within the concave spaces upon the viewers and to draw the eyes from the building scale to the human scale. Onion also composes an illusion of new pattern within the depth of the main facade by reducing the size of aluminium sheet modules to become smaller and smaller towards the ground. This gradation of built modules leads human perception to the smallest void in the main facade, a secondary passageway at the point where the white precast concrete walls met the gold recessed walls.

A grand plaza set next to Asian Highway 1 is juxtaposed by a more informal plaza set next to a local road. Onion chooses handmade local bricks in orange colour to create the facade of this secondary plaza. The choice of material, brick, is for the familiarity of local users. The form of the brick is customised as half-circular, when arranged, the overall brick facade appears to be like woven textile. The brick facade itself is concave in order to envelop more space and to create cozy atmosphere. The design is meant to create different spatial effects by the arrangement and composition of local materials. 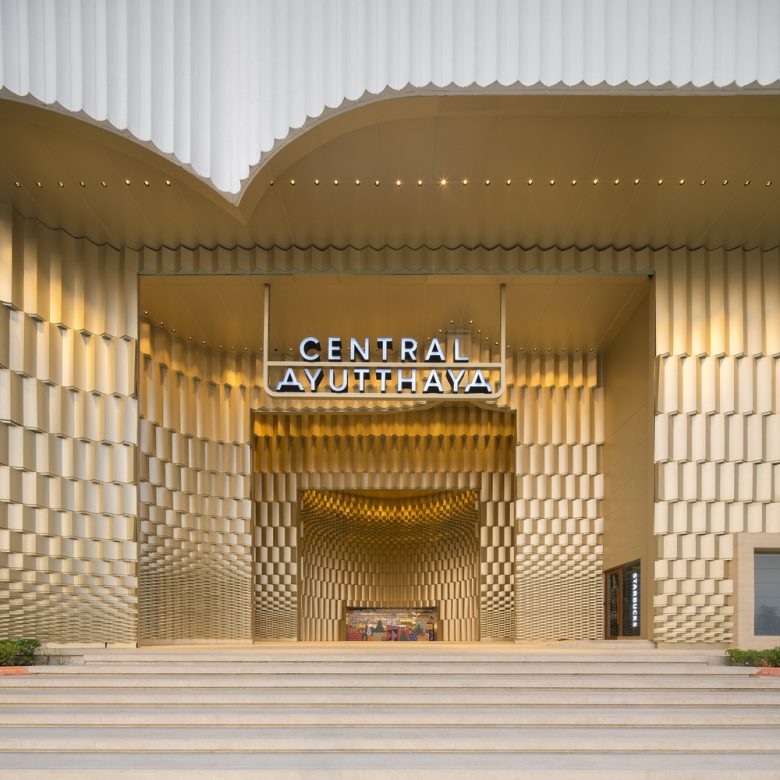 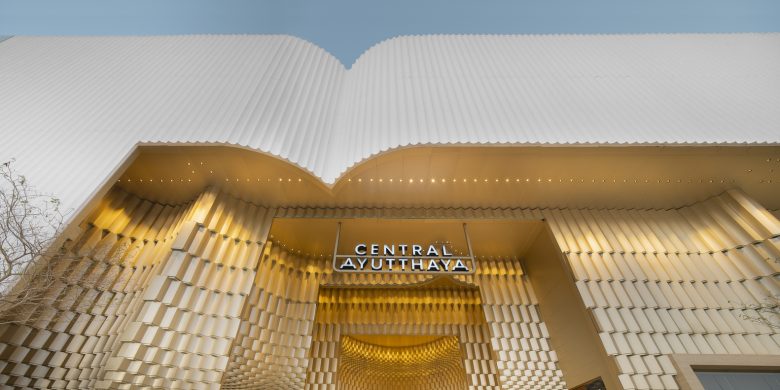 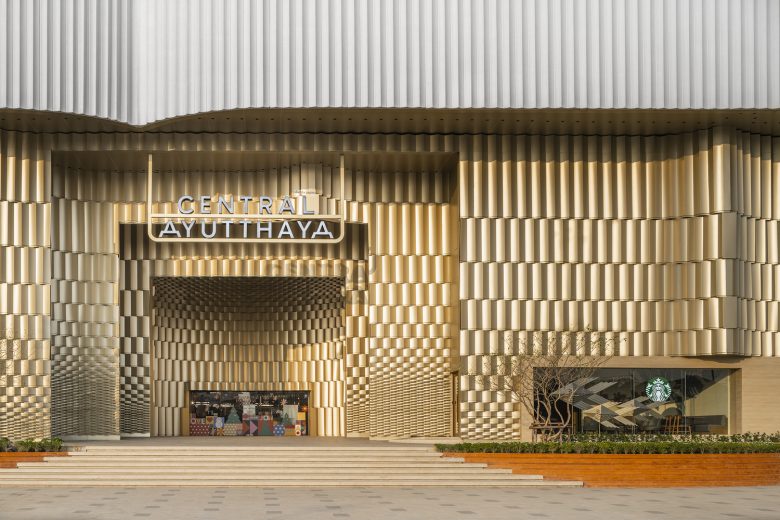 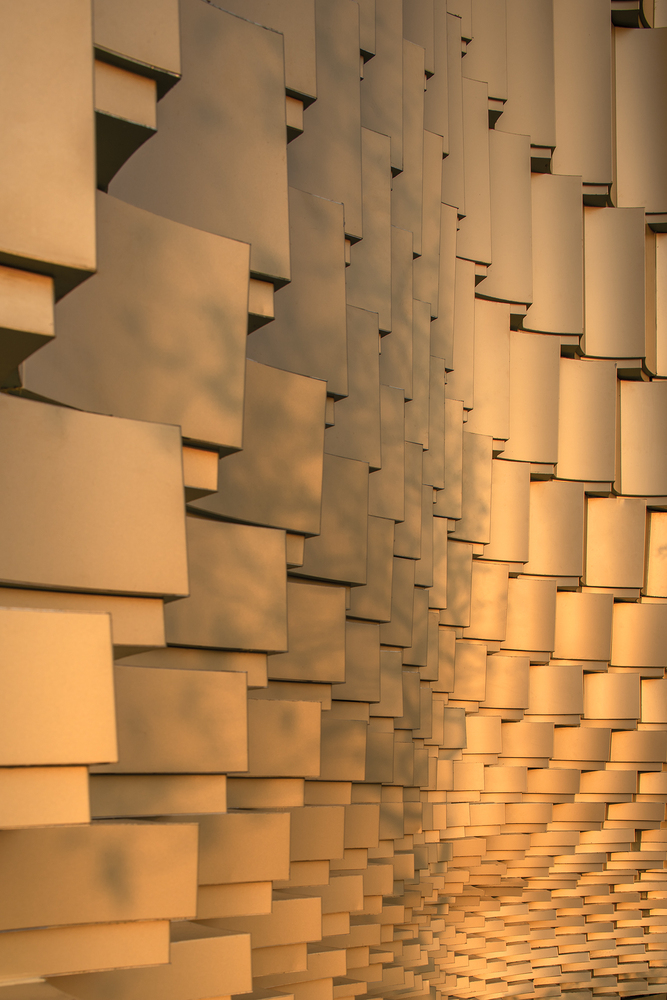 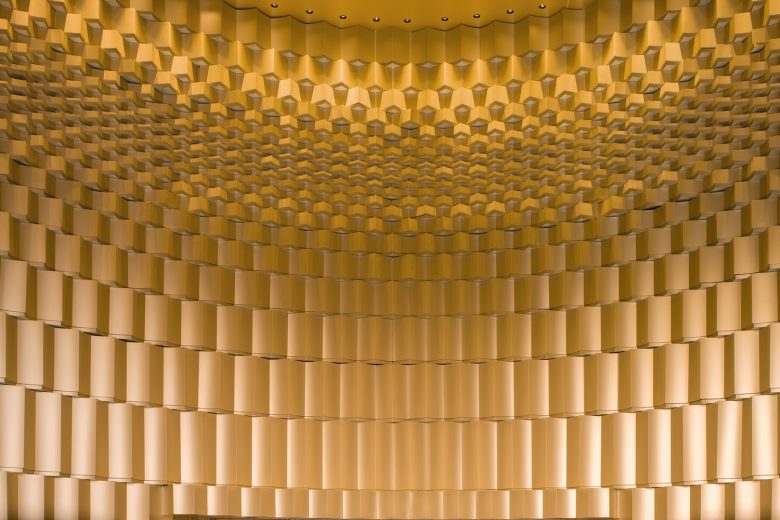 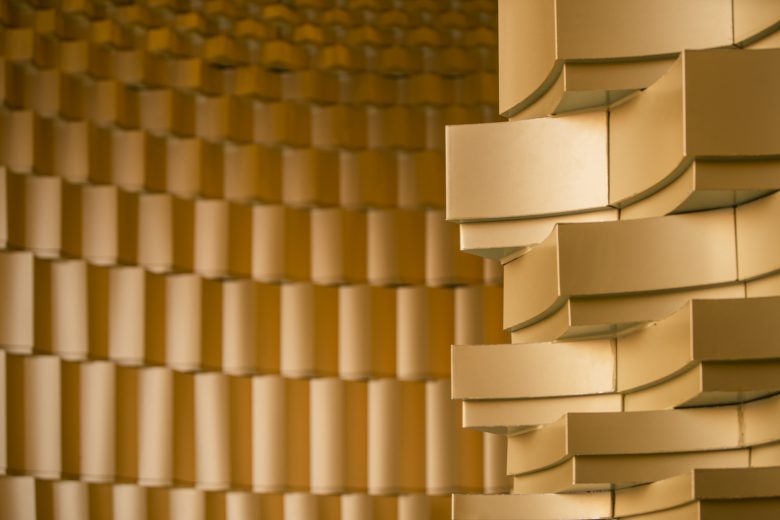 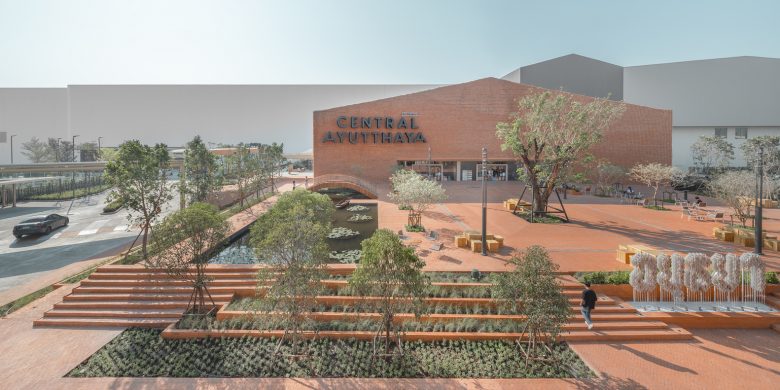 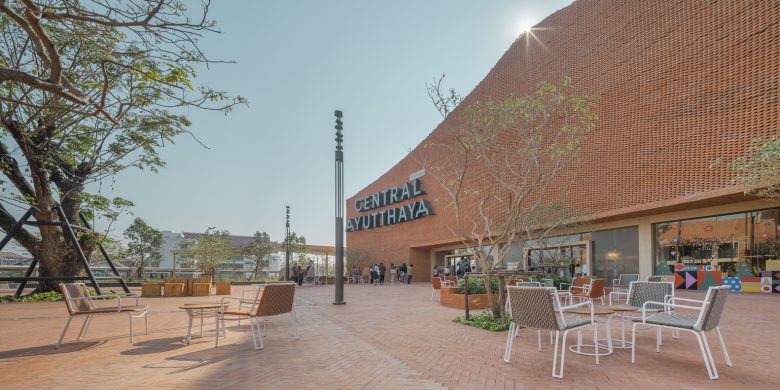 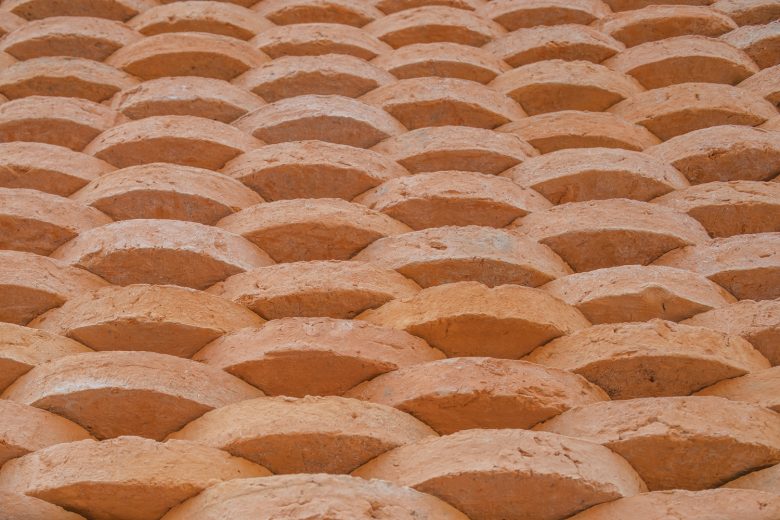 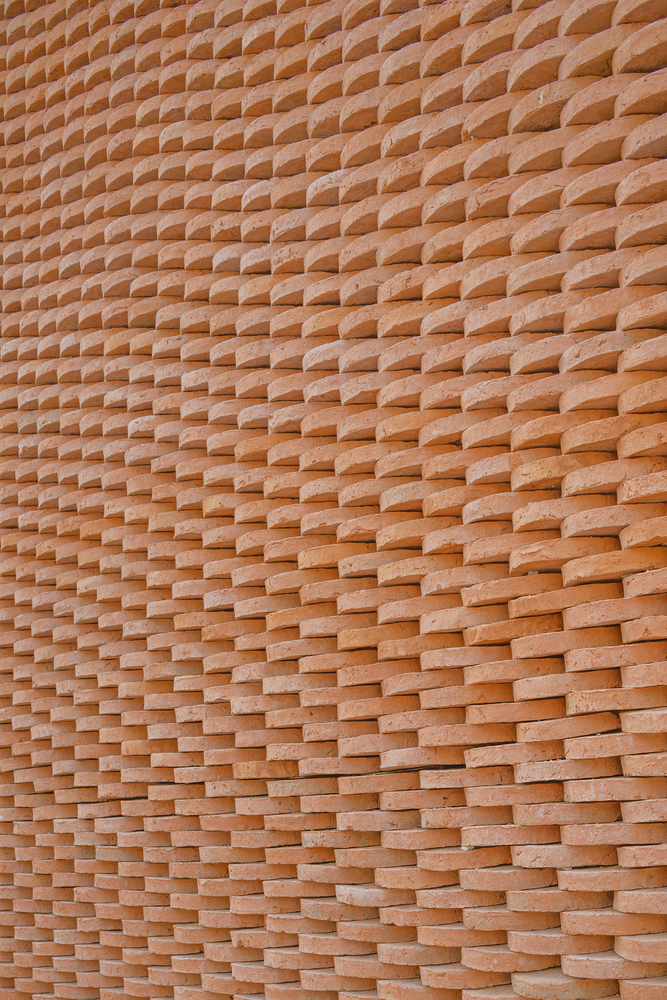 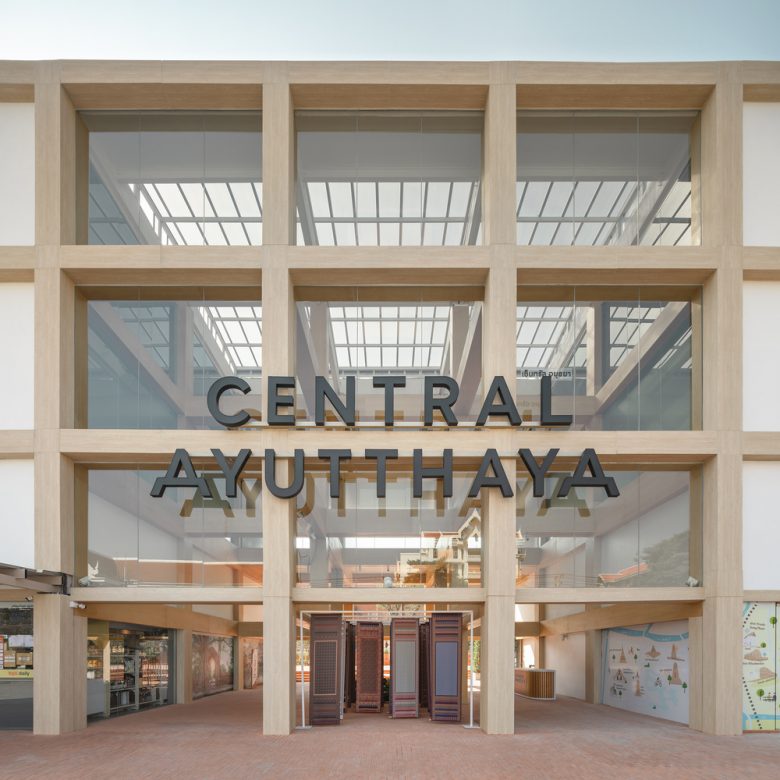 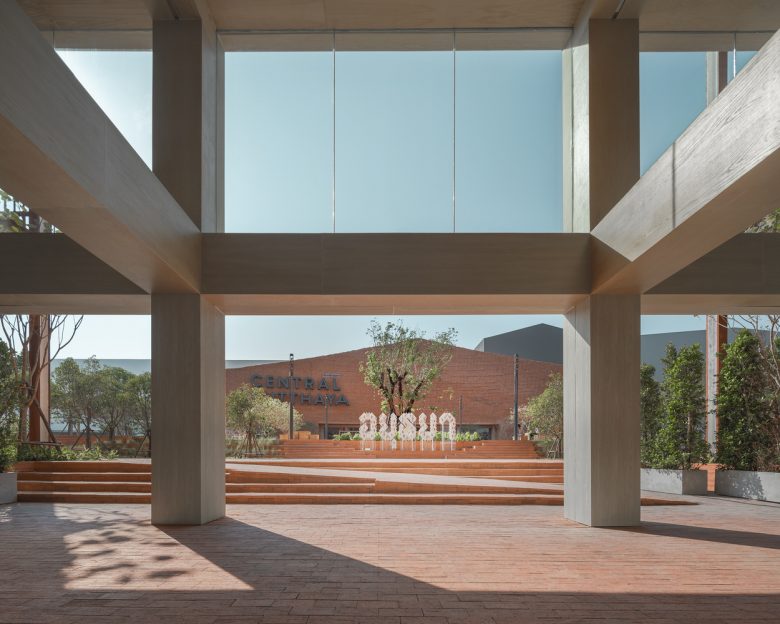 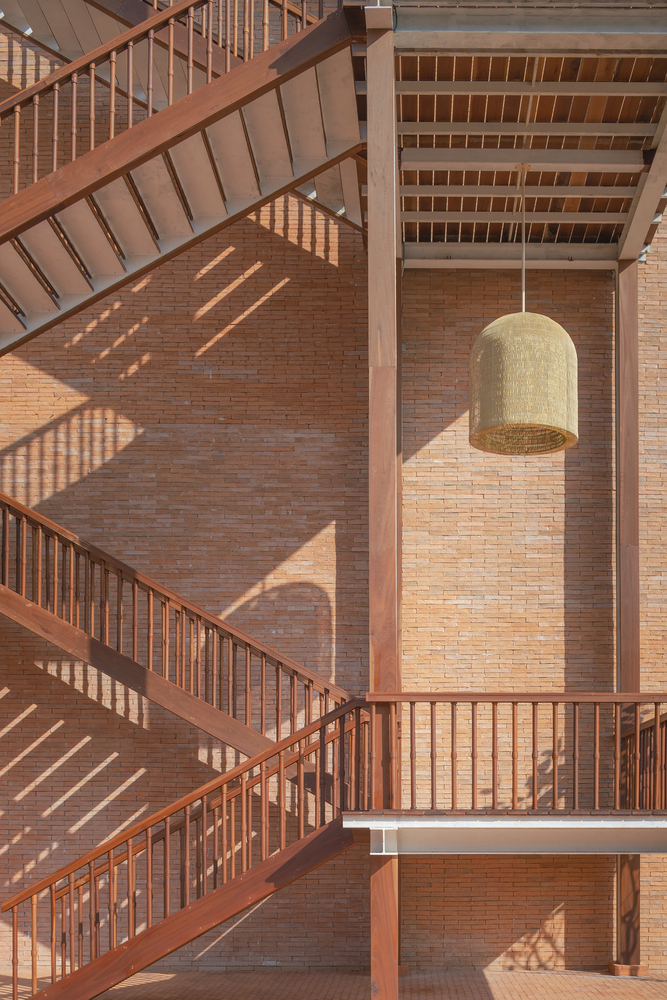 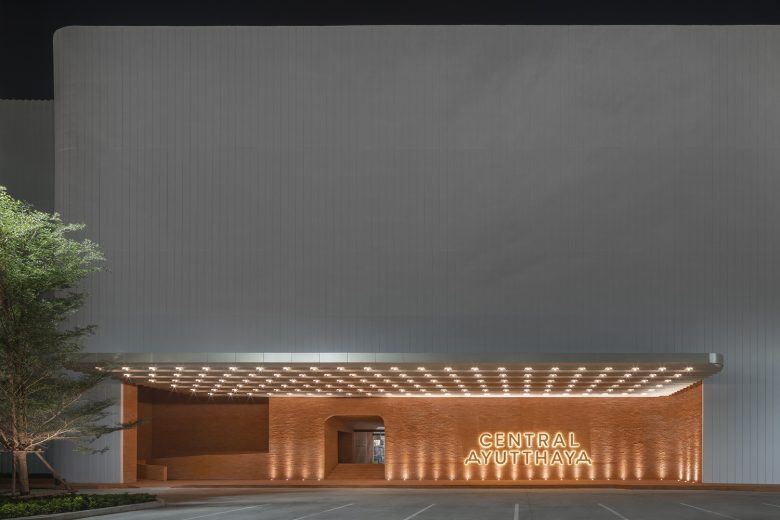 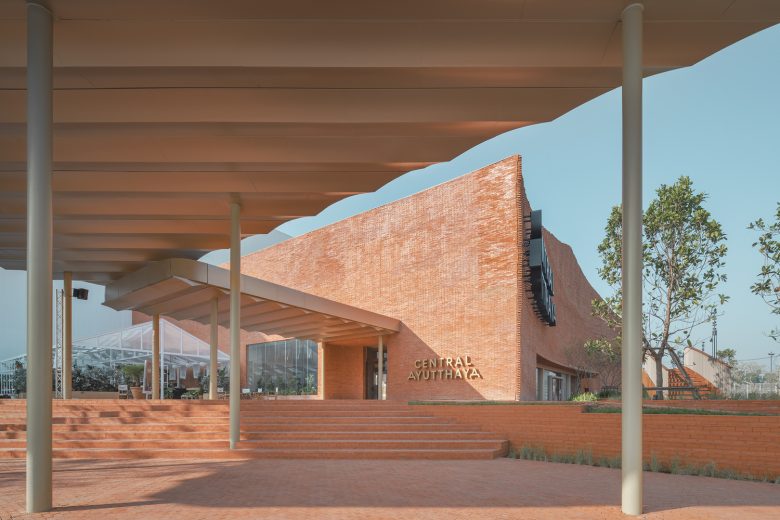 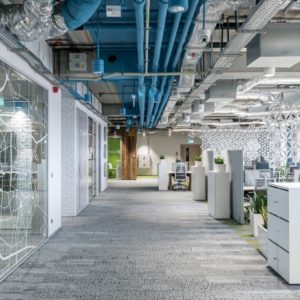