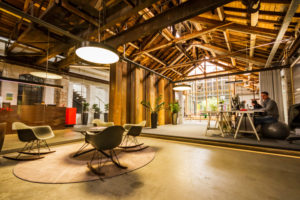 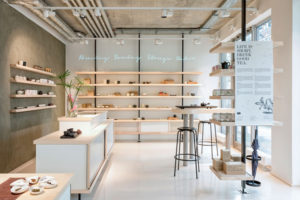 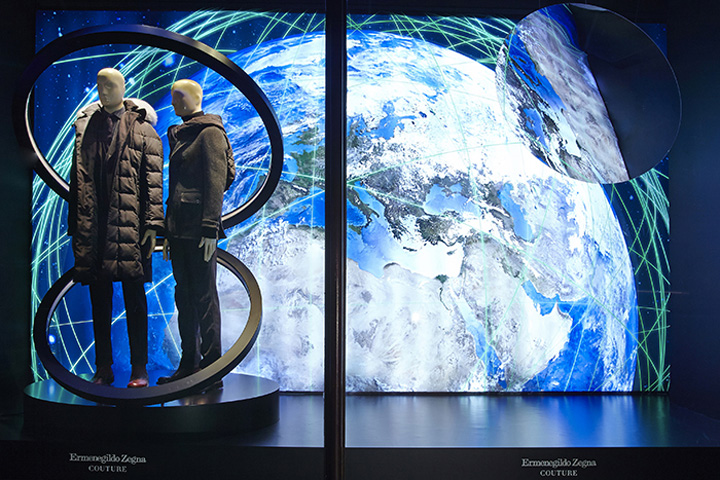 Ermenegildo Zegna Couture, the luxury menswear brand have launched their Autumn Winter 2014 collection with a celebratory, ground-breaking installation across the front run of Harrods windows. This is the first time a menswear brand has taken over all of Harrods front windows and Zegna comissioned award winning agency Elemental Design to design, produce and install a series of hi-tech window displays, inspired by the Autumn Winter 2014 collection and the astronomical film which launched the fashion show during Milan Fashion Week. Created in collaboration with Stefano Pilati, Ermenegildo Zegna’s Head of Design, the film depicts a real scientific path which is traced by astrophysicist Fiorella Terenzi, Professor of Astronomy at Florida International University (FIU), and Professor Neil deGrasse Tyson, Director of Hayden Planetarium, who together formulated a set of trajectories created in unique movement that fuse the primordial universe with the Milan CityLife Palace, where the collection debuted. The soundtrack captures the waves from space, which were converted into sound, and then transformed into music, blended with Tchaikovsky and the sound of contemporary life within the cities of Milan, New York and Shanghai, selected by Stefano Pilati. Zegna announced the collection as proposing a “journey from and to the early Universe”, and Elemental Design were keen to introduce exciting technology and drama into the window concepts, in order to fully captivate the customer. From the unknown wonders of the intergalactic, to the minutiae on the street, the windows encompass the inspiration of the film and the spirit of the collection. Passers-by are invited to engage with the window displays; peering in to small peepholes, to be awed by a vision of outer space; whilst large cityscape backdrops, revolving mannequins and fast moving light rings, reflect the frenetic pace of city life. The show film is played in a ‘whispering’ window through which ‘space sounds’ and music are projected onto the street, encouraging shoppers to stop and engage. As the film ends, a series of lit footsteps appear to walk across the window bed, directing the consumer to the hero product; a beautifully hand crafted Ermenegildo Zegna Couture shoe. In the two windows either side of the grand store entrance, a two way mirror trick creates an optical illusion, transforming a row of impeccably styled mannequins into an infinite army of Ermenegildo Zegna Couture clad figures. Highlighting the Ermenegildo Zegna Couture accessory range, Limited Edition pieces exclusive to Harrods, are displayed on mirrored podiums, adjacent to further angled mirror platforms which on closer inspection reveal spherical images of moving globes, recreating the essence of the scientific trajectory.
Through the use of interactive technology and a 360 degree film, shoppers are encouraged to explore every detail of Ermenegildo Zegna’s Couture Double-Monk shoe, directing it’s rotation by using arm gestures and body movements. The installation will be in Harrods windows from 2nd to 19th October 2014, coinciding with the launch of Pilati’s first ‘Couture’ bag for Ermenegildo Zegna Couture, available in three leathers across five colours. Ermenegildo Zegna Couture is the group’s premium tailoring offering and sits alongside other lines including Ermenegildo Zegna Made-to-Measure, Zegna Sport and Z Zegna. The Double Monk Shoes (£950) and Couture Bag (from £2,165) are both available to buy now in colour ways exclusive to Harrods. 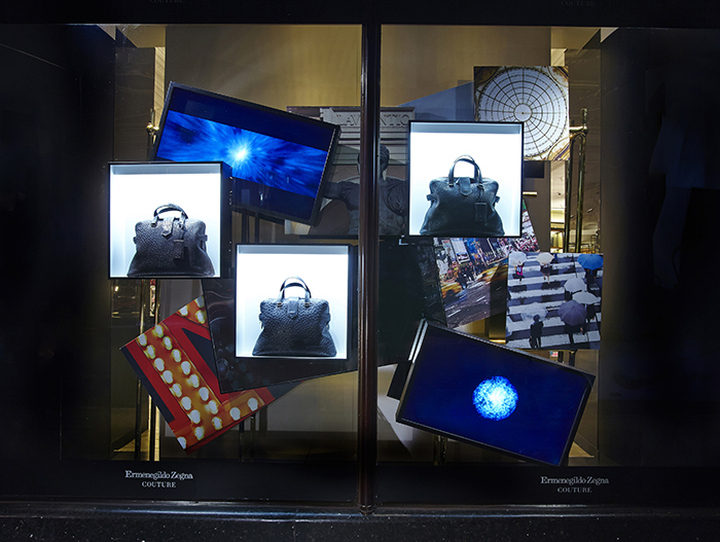 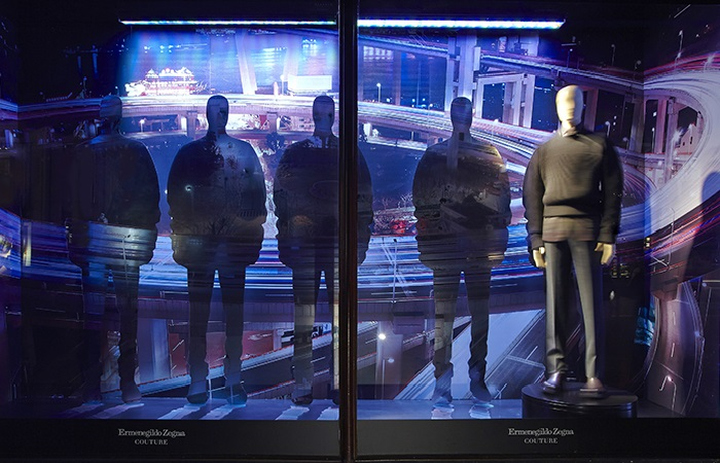 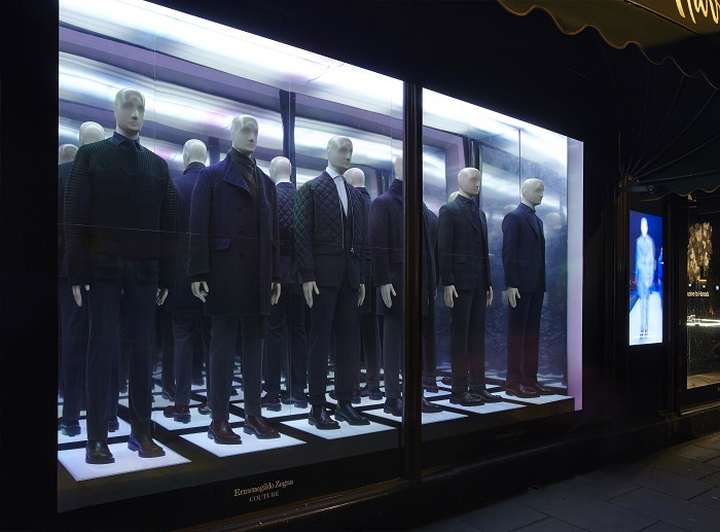 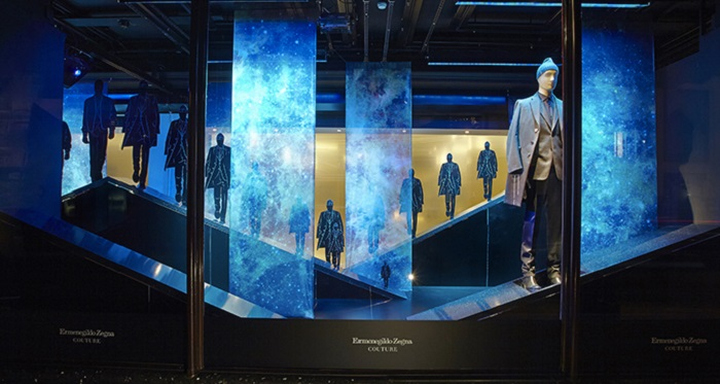 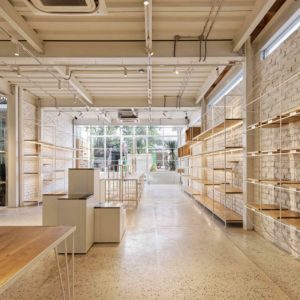 The Concept Store by Studio 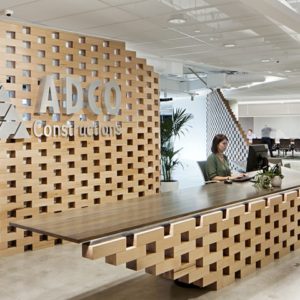 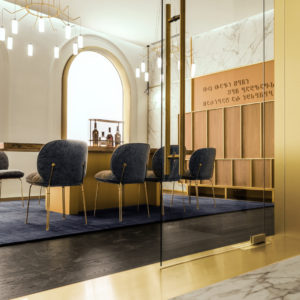 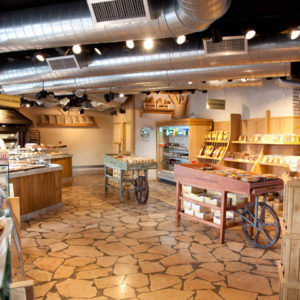