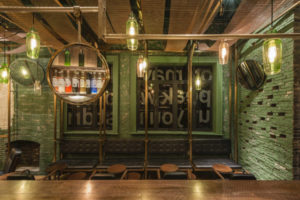 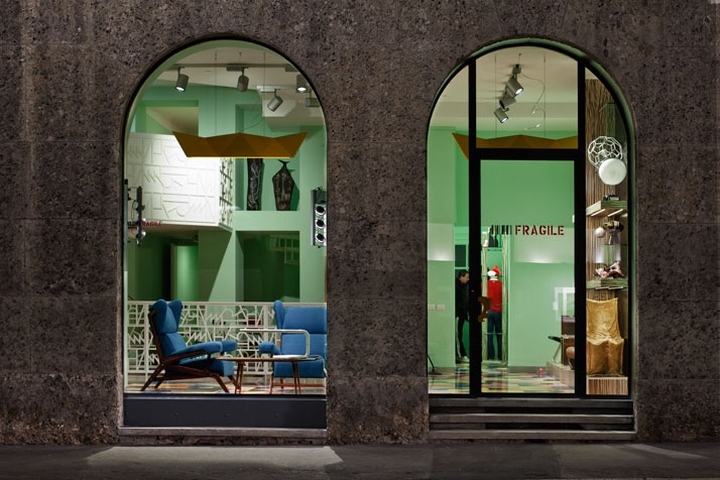 With its pistachio green walls and multicoloured floors, Fragile, the new Atelier Mendini gallery located in Milan, is being hailed by some as a revolution, whilst others are calling it a design faux pas. While it’s hard not to argue that it’s a bit of both, it’s definitely a splash of colour on the city’s otherwise unadulterated white walls. With the current running trend in design in the Italian fashion capital calling for neutral and low-key spaces, the Mendini brothers wanted to create something that went against the norm, calling visitors to “prepare yourselves to the irony and high character of the new location which links to the exhibited pieces in a very unconventional way and becomes a main part of the exhibition itself as a developer of style and ideas.” In collaboration with Arianna Lelli Mami and Chiara Di Pinto of Studiopepe, Alessandro and Francesco Mendini have created a new two-floor 200m2 space for their design venture, Fragile. Opening its doors last December in east Milan on Via San Damiano 2, and more 70s glam than new-century understated chic, the boutique is a rebellion against Milanese design norms and breaks the mould of the pervasive white cube. Where vibrant colours adorn the walls (in either a hue of pistachio green or bubble gum pink), unusual patterns and materials blend to create a canvas for the studio’s varied and unique range of furniture, lighting, home ware and jewellery. A white lattice metal staircase runs through its centre bringing out the oversized jigsaw style pattern of the brightly coloured floor (which is the main feature of the new space), showcasing extremely rare pieces designed by Max Ingrand, Gio Ponti, Franco Albini, BBPR and Gino Sarfatti. Fragile, originally founded in 2000, specialises in design objects from the 50s to the present-day. The Fragile concept is two-fold, encompassing two labels: Fragile Novecento, dedicated to 20th-century design and Fragile Edizioni, a special edition of objects that have largely been designed by famous artists including Gio Ponti, Angelo Mangiarotti, Carlo Scarpa and Osvaldo Borsani. The two facets of the brand ”…are intended to help customers in their search for the object that could satisfy their aesthetic and practical needs, assuring, in the meantime, the authenticity of a valuable and enduring investment,” as the designers say on their new website. An award-wining designer and architect, Alessandro Mendini has played a key role in the evolving international design landscape with pieces like the Proust Armchair and the Groninger Museum in the Netherlands. Constantly exploring the dialogue between different cultures and forms of expression and seeking to reassert values which he considers have been lost to commercialism, he is extremely respected in his field. He has also worked with high-profile brands like Hermès, Cartier and Swarovski. His brother, Francesco is also an architect. In 2012, an outpost of the Milanese showroom opened at the Puces (flea market) de Saint-Ouen in Paris, reflecting Fragile’s mission to reach an international audience.