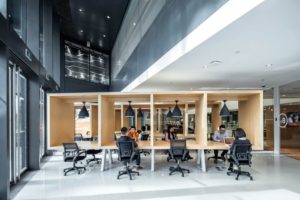 Just less than 25% of Spain’s 2,440 castles are considered to be in a good state of preservation, often due to the lack of adequate local resources to sustain conventional methods of cleaning and conservation. One site in the province of Cuenca with ruins spanning the Moorish, medieval and neoclassical eras was among the majority until very recently when the national government commissioned Madrid-based firm Izaskun Chinchilla for a comprehensive and sustainable restoration that would also allow the castle to serve as a centre for cultural and social activity, hosting numerous public functions aimed at bringing computer and media literacy to a historically-rural area.

Considering the site’s manifold historical contexts, the team envisioned the intervention as ‘an orthographic system enabling us to decipher a chaotic and incomplete inherited “text”’, yet one which would also be adaptable to future contexts. Hence, all new structures are light and temporary, largely comprising portably-scaled units of galvanised steel that are bound together by reversible joints. Elements such as colour-coded glass symbolically demarcate the configuration of the historic space and so aid visitors in imaginatively reconstructing them. The blindingly sci-fi appearance of this scaffolding might initially seem distracting to this purpose but ultimately manifests the firm’s intention of maintaining a strict separation between new and old architecture and asserting the site’s relevance to the present.