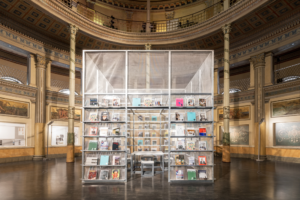 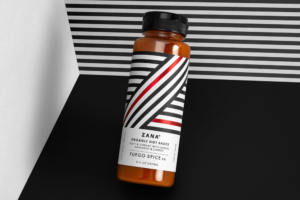 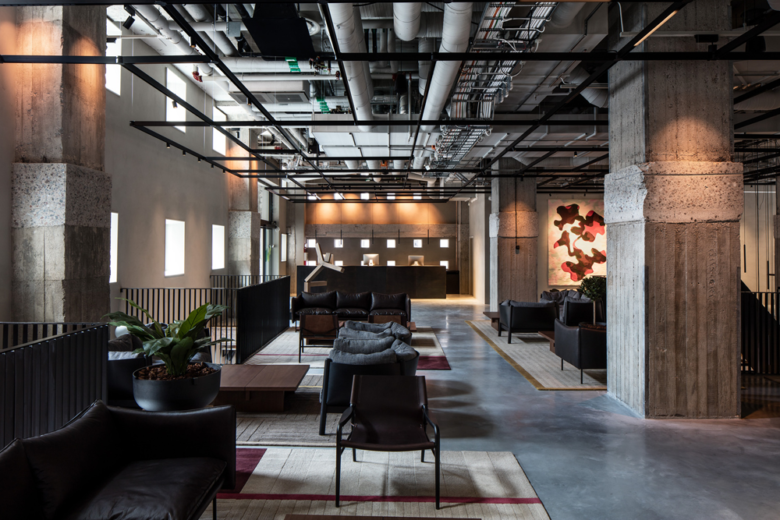 Behind the sober building at Gävlegatan 18 in Stockholm, a mystical environment opens up. To the right stands a large building with many small windows and straight ahead is a bent one. Why all these little windows? And why this noble bend? All of it is now part of Nobis’s new hotel, Blique. The sober building facing the street, like the one on the courtyard with the many small square windows, was designed by Sigurd Lewerentz, the most ingenious individual of the twentieth century in Sweden. His radical obstinacy has now achieved mythical proportions, which only enhances the radiance of the distinctive courtyard building.

The buildings were constructed in 1930–31 for the Philips Corporation of Sweden. The one facing the street was for offices and the one toward the courtyard a warehouse. That explains the small windows, but there are more mysteries here to be solved. Why Philips needed a warehouse strong enough to hold the country’s gold reserves for storing light bulbs, fluorescent tubes, and radios is still a mystery today. In any event, the result was a building that is powerful in every sense of the word.

The bent building was constructed in 1990 according to designs by Alenius Silfverhielm Åhlund. Its noble bend is an echo of the Roman palaces of the late Renaissance, a complex architecture that the theory-conscious architects here gave a Nordic interpretation. Now that the complex has been converted into a hotel, a couple more floors have been added. This addition was designed by Sweco, while Wingårdhs was responsible for the metamorphosis of the complex as a whole to become a hotel.

The office building is now the hotel’s event and conference facility, while the buildings on the courtyard hold its 249 guest rooms. Their design is based on Lewerentz’s no-nonsense approach. We’ve left the concrete essentially just as we found it, and most of the additional elements are made of polished concrete or steel. The idea is that the straightforward materials make a night in the hotel an appropriately anonymous and pleasantly discreet experience, not to follow in the footsteps of the great architect. But we do just that in the installation of fluorescent tubes that adorns the entrance. It is an unabashed homage to Philips and to Lewerentz’s innovative wiring scheme for his flower stand at the East Cemetery in Malmö.

If the rooms have a raw, austere attitude, the public areas are more cozy. In concert with modern classics from Danish and Italian furniture makers, we’ve also included “Boa,” a lamp Wingårdhs designed for Örsjö Lighting. The character of the former warehouse building was largely already established, so we’ve left many of the interior unchanged, including the lobby. We also left alone the wall behind the reception counter, which the architects of the bent building gave windows with divided lights in 1990—a change we appreciated enough to feature in the new design.

But the most striking environment in Blique is still its roof deck, which offers the most stunning views in Stockholm. The experience is enhanced by the ascent from the restaurant up to the very top of the tallest building. Here we see the multi-faceted architecture of the neighborhood, from Röda Bergen, the most interesting residential area of the 1920s, to the brand-new district of Hagastaden to the north, as well as the singular block of which Blique is part. Beyond its spires and sculptures, the whole city stretches out before us. 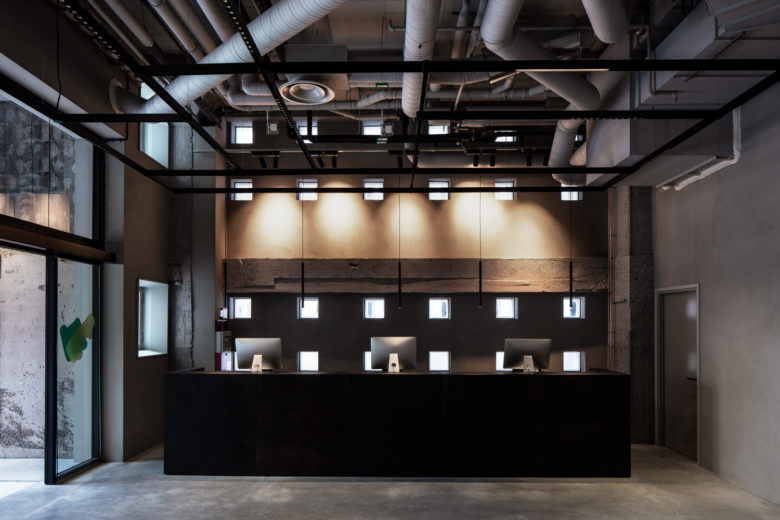 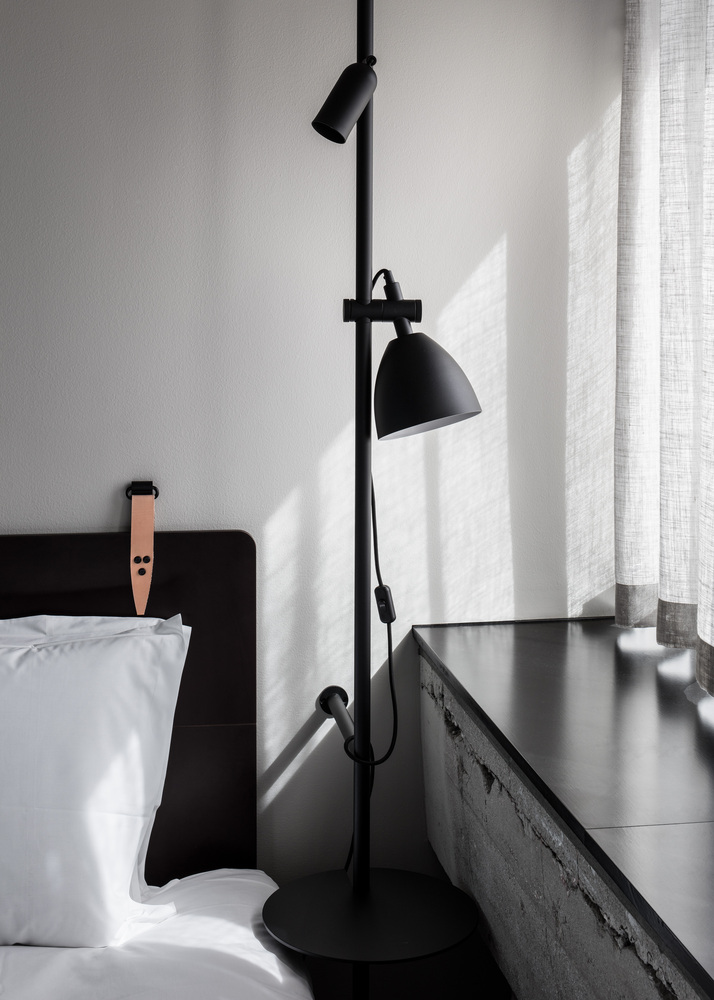 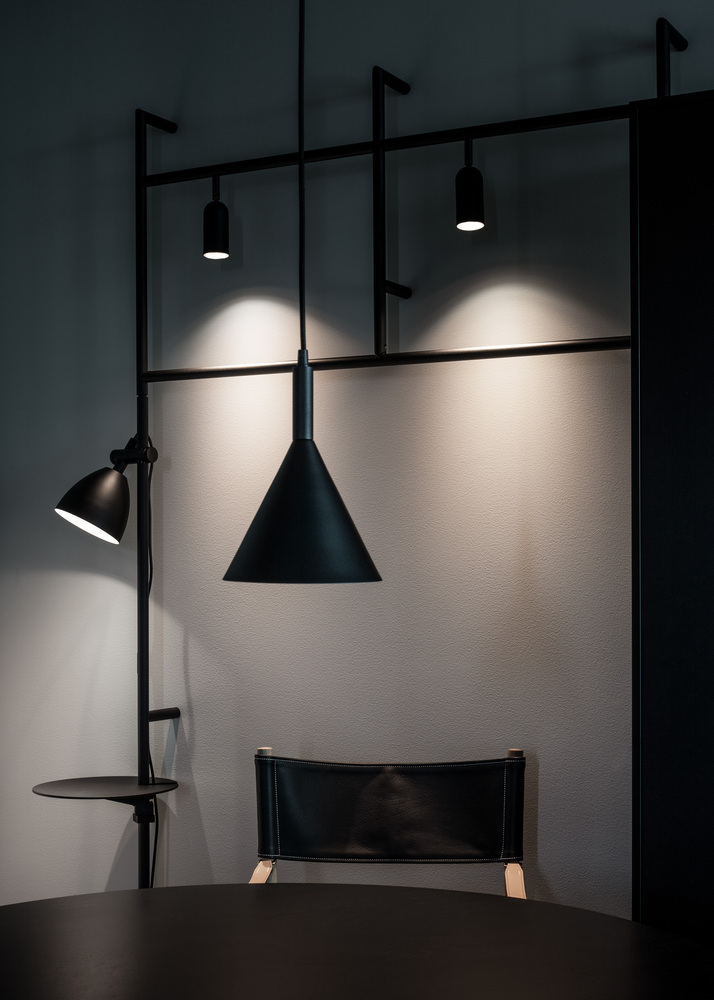 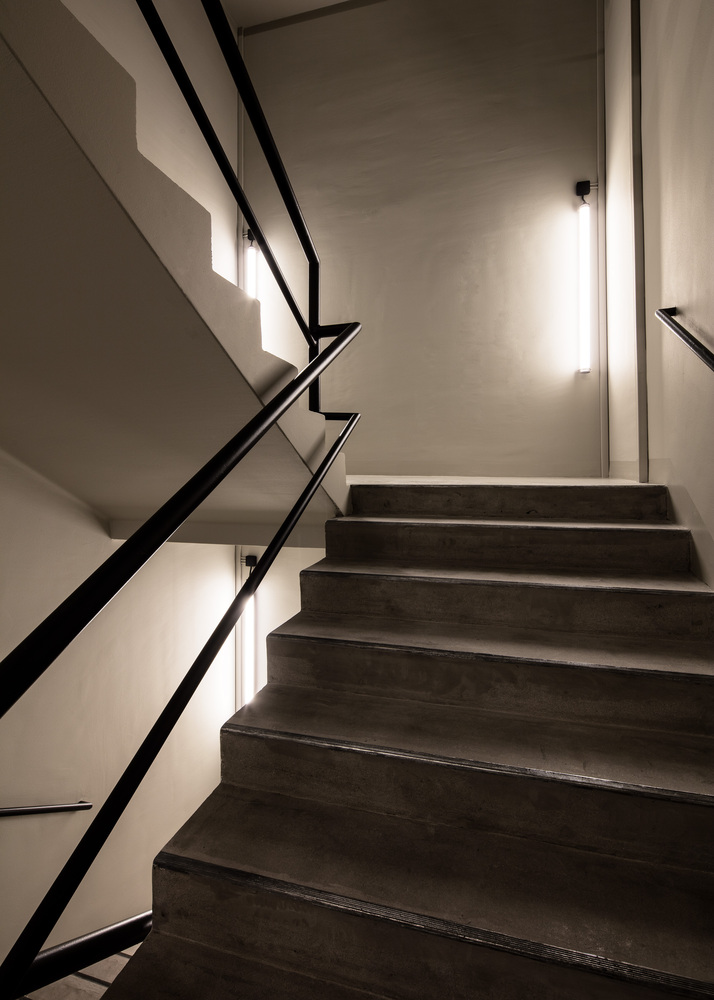 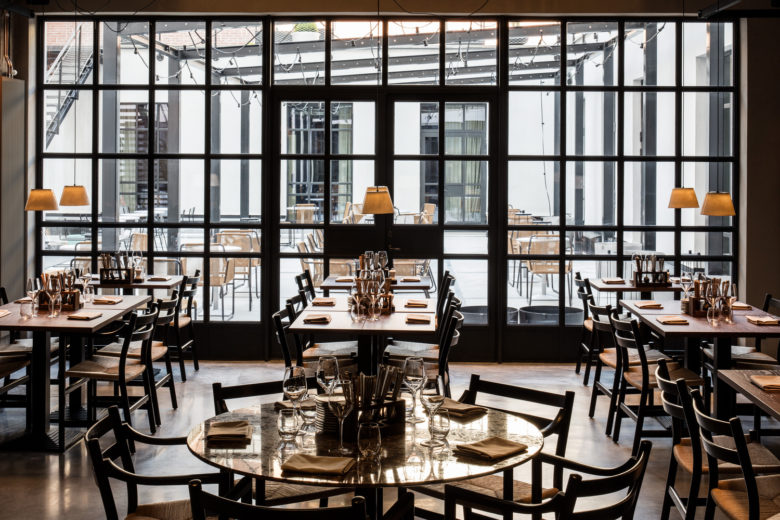 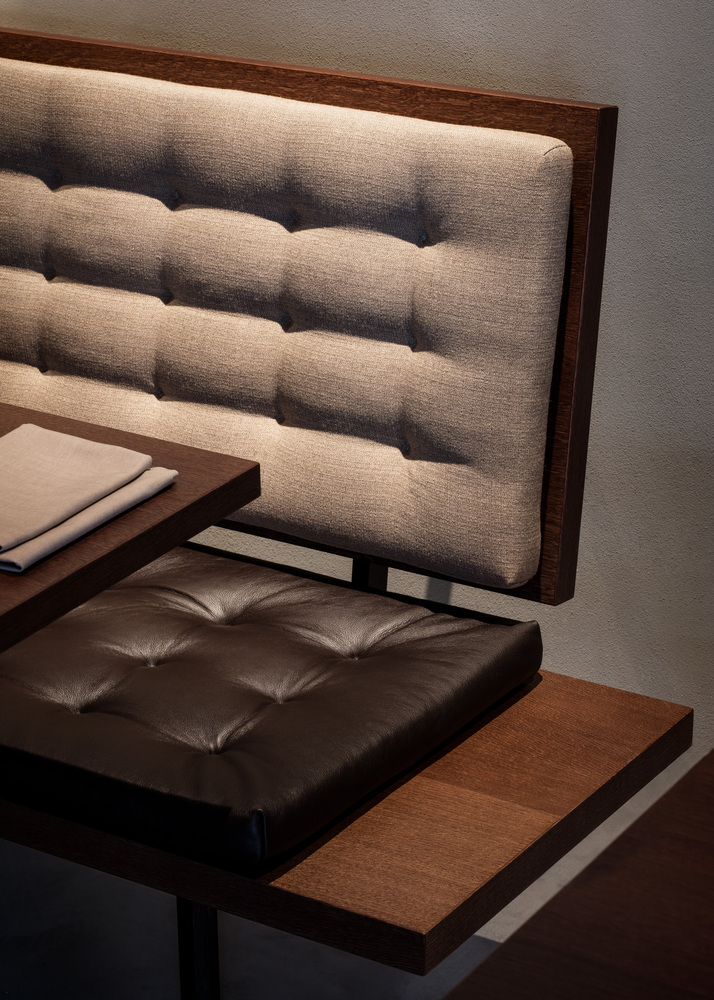 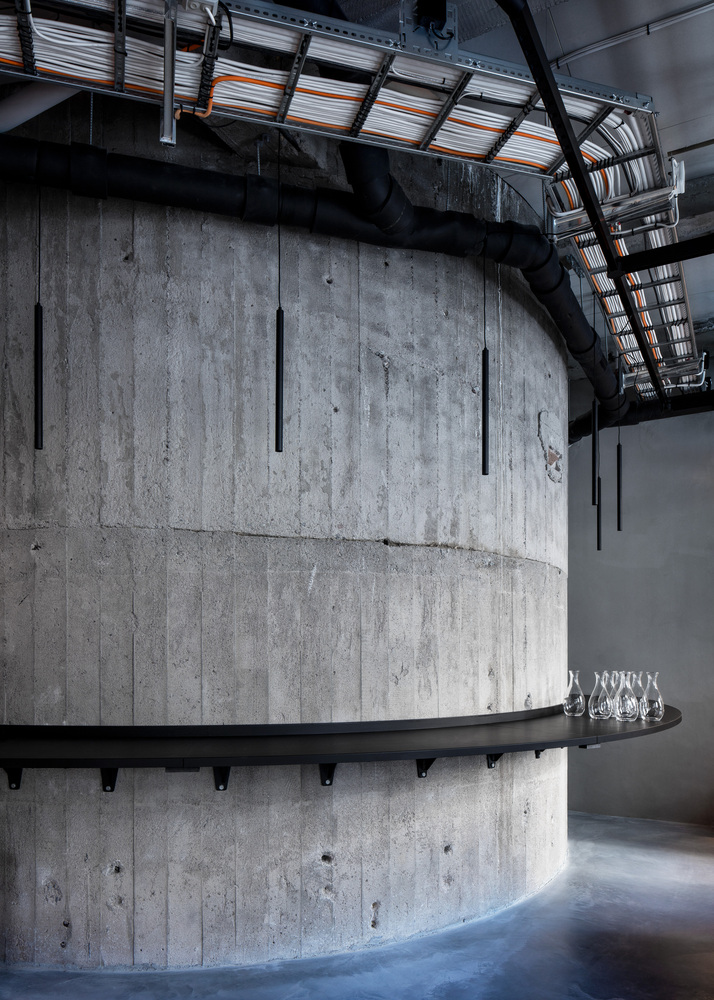 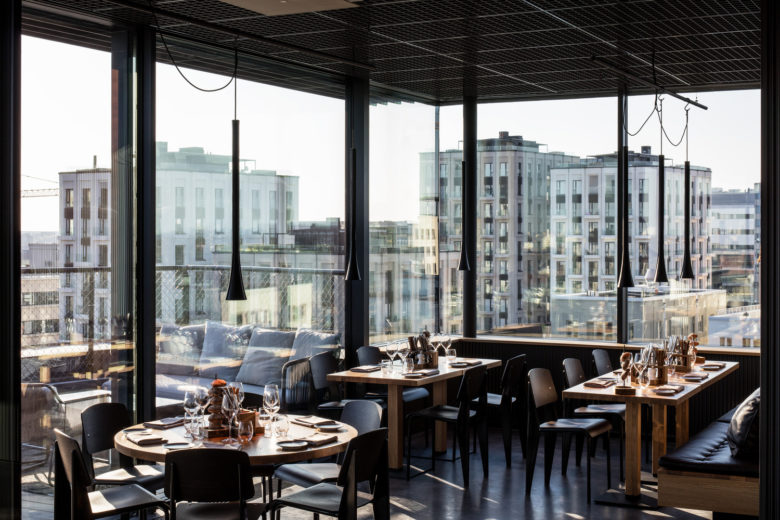 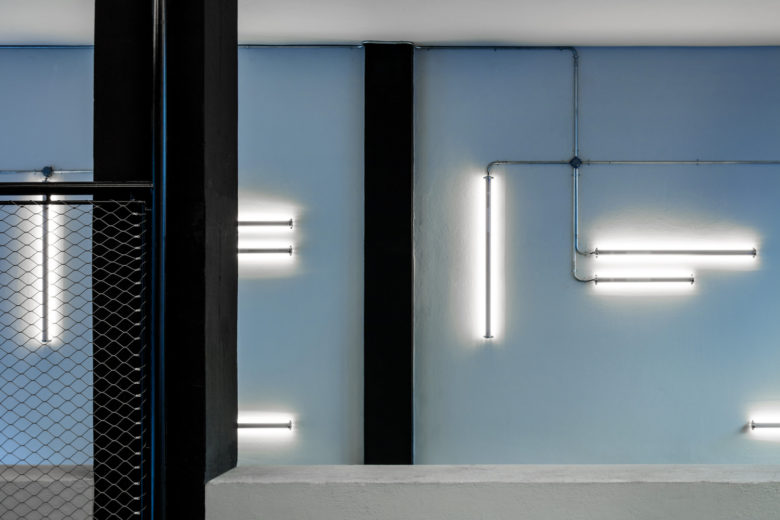 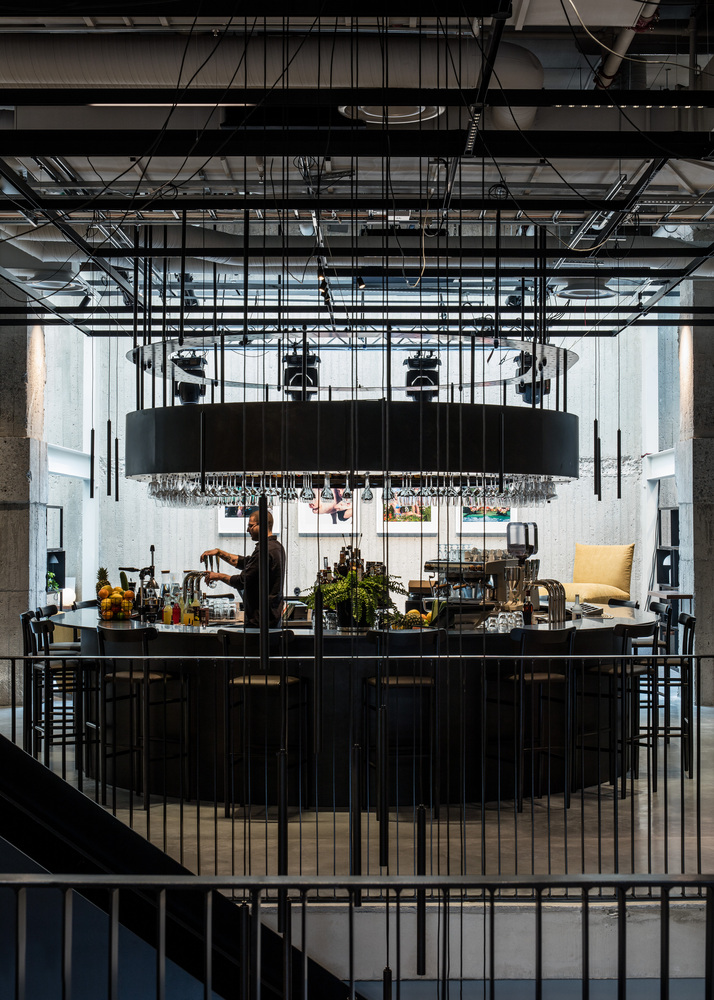 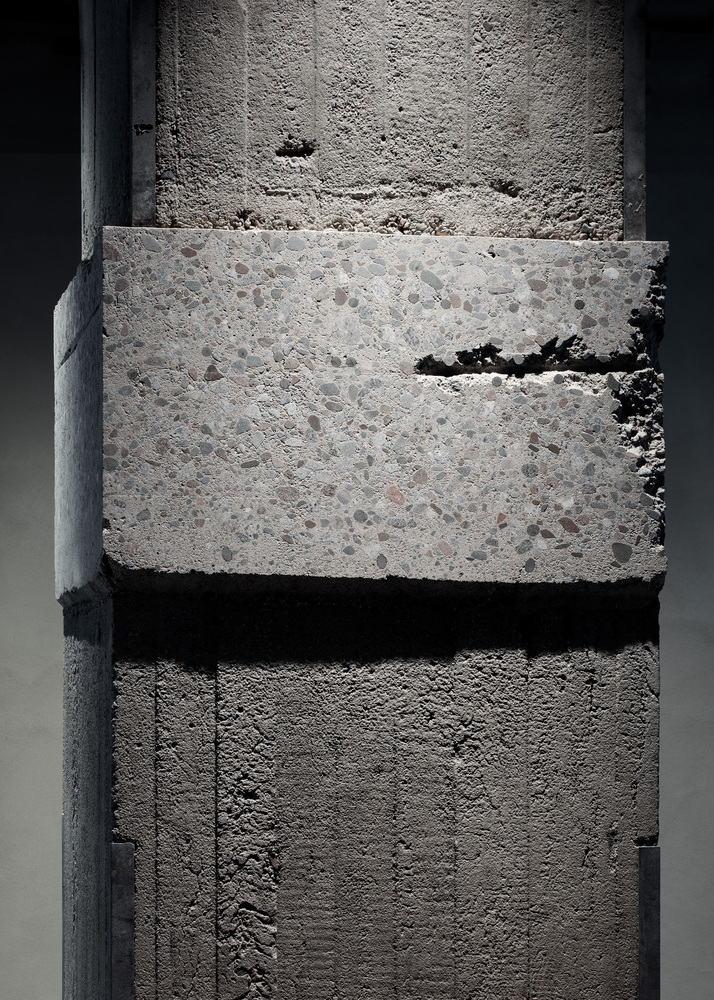 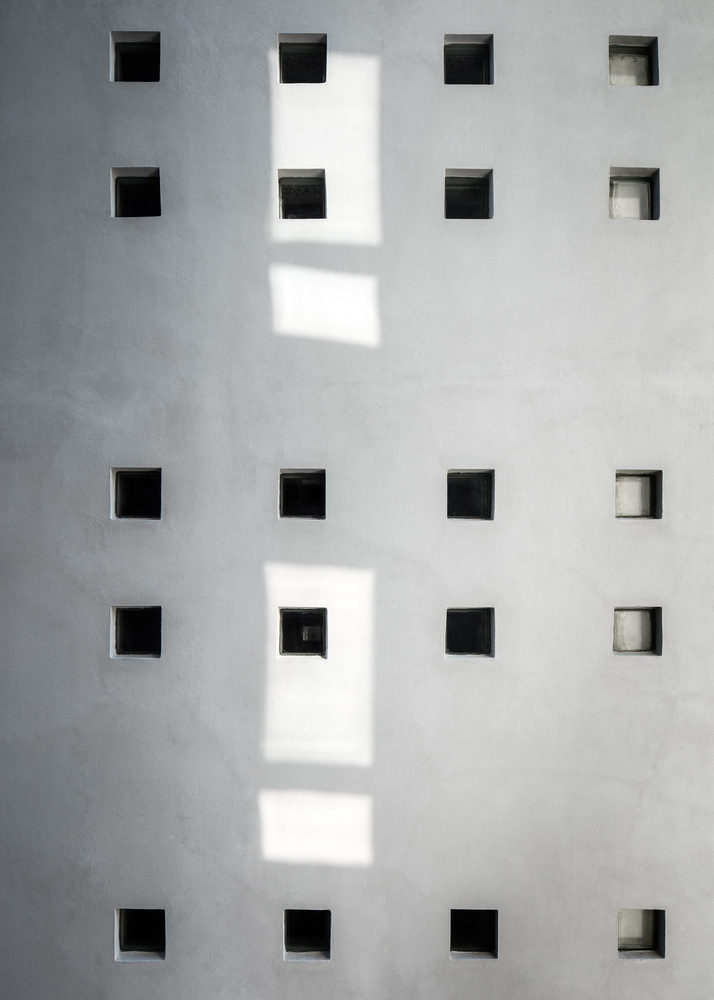 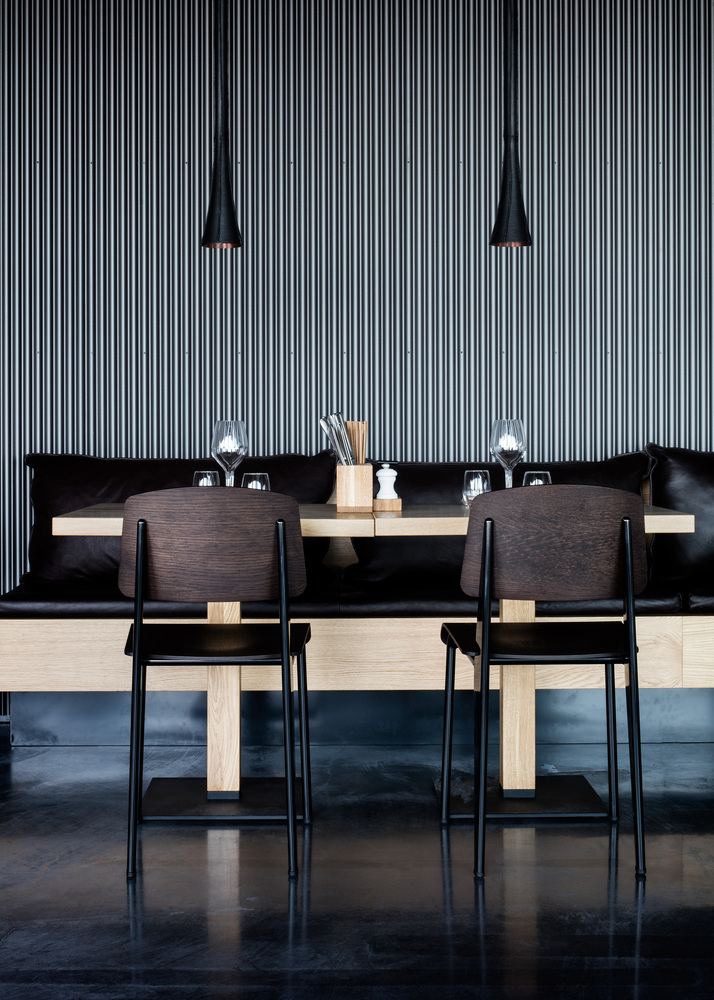 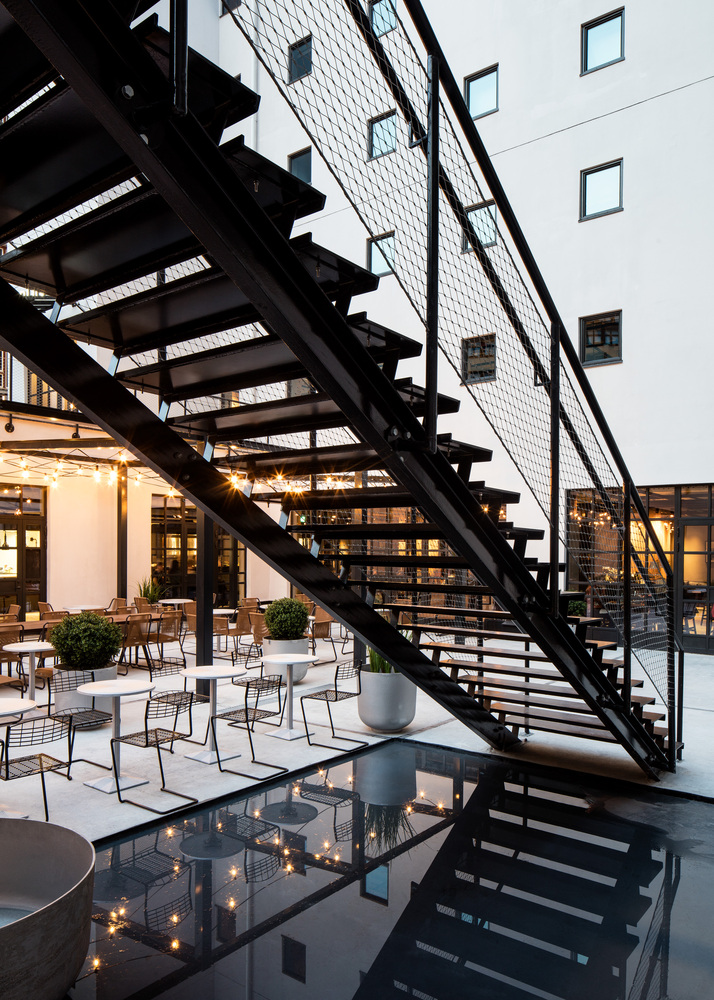 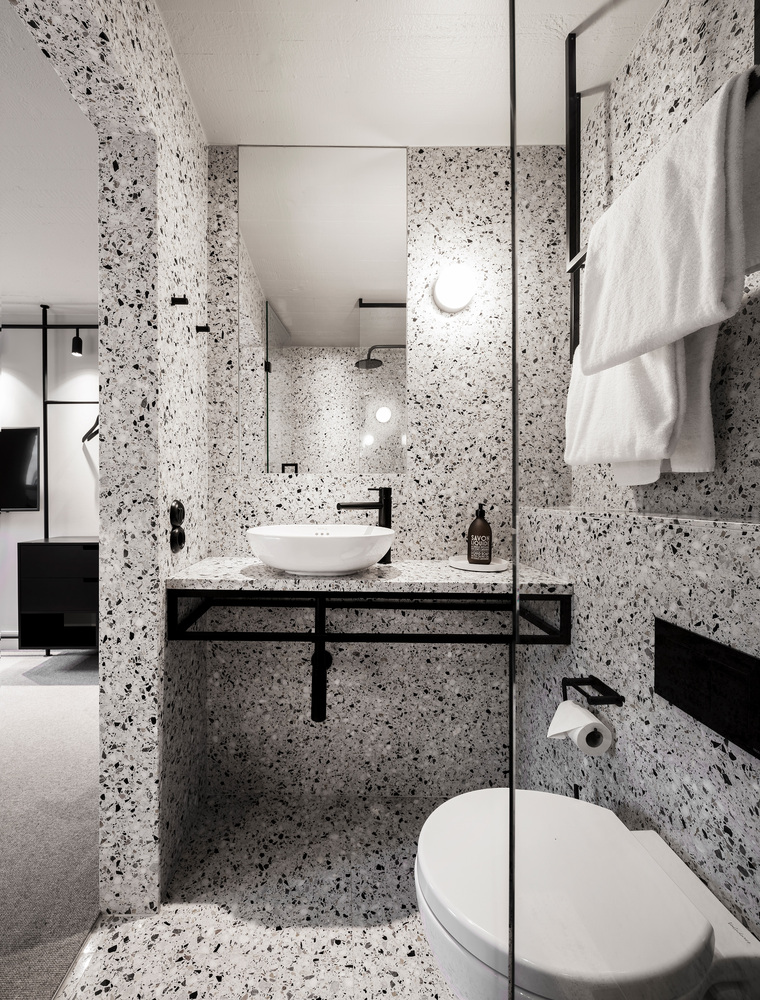 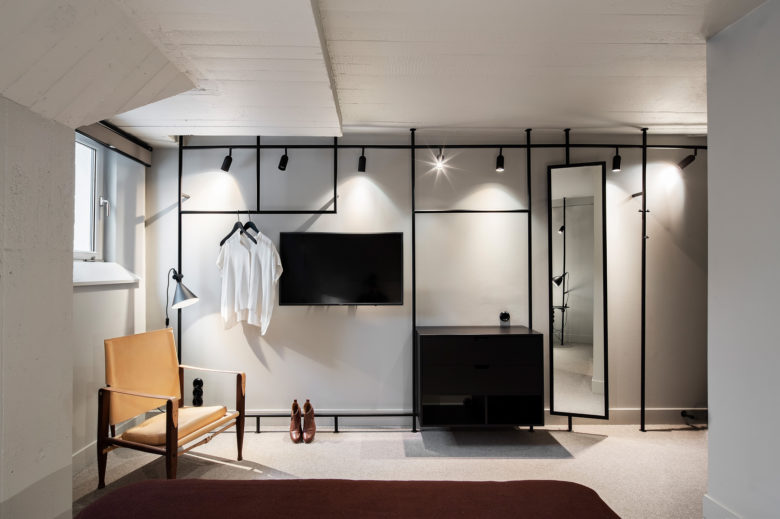 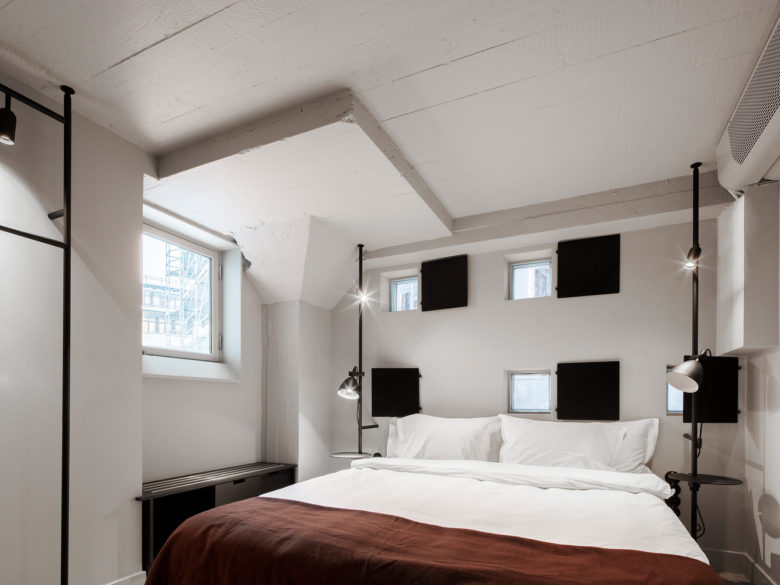 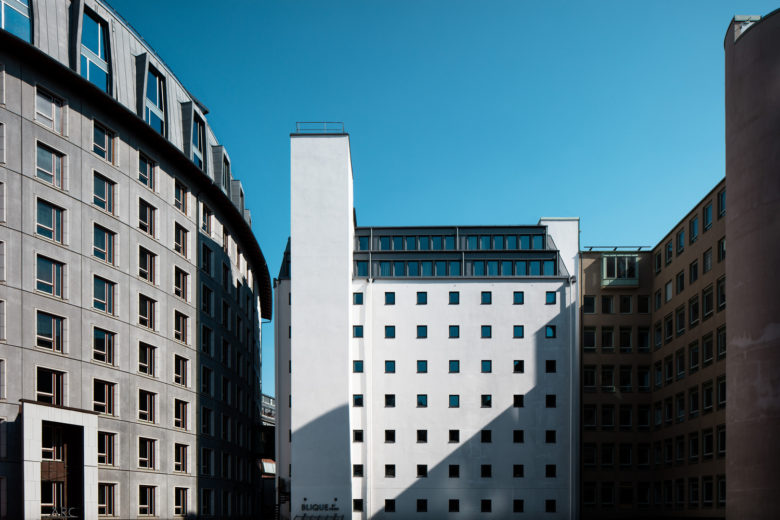 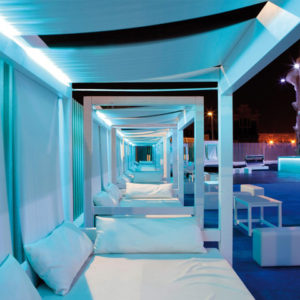 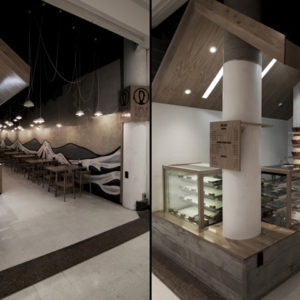 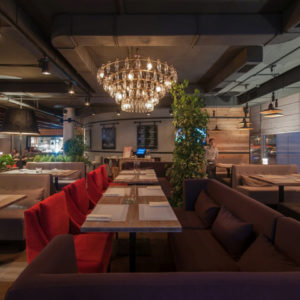 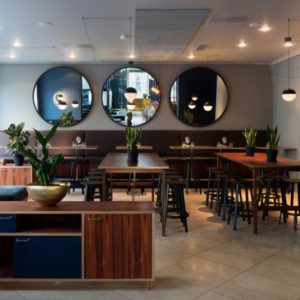