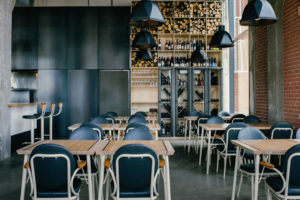 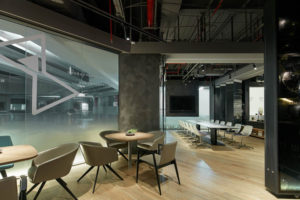 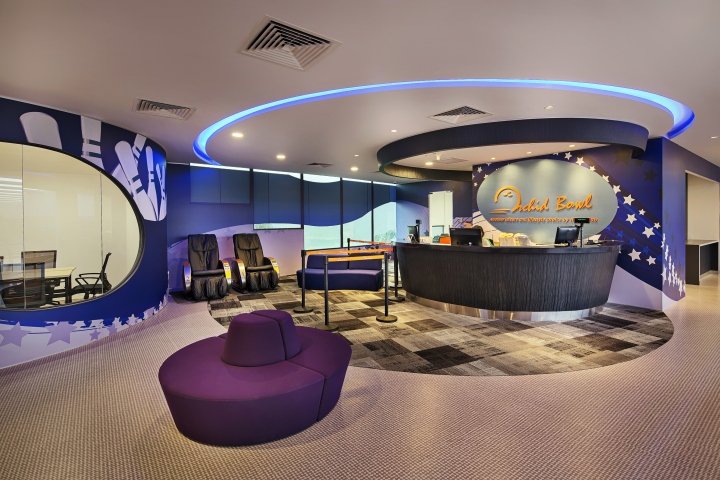 Singapore’s commercial interior design company Kyoob-id has recently completed an interior design and build project for a new bowling centre for Orchid Bowl at SAFRA Punggol. Orchid Bowl @ SAFRA Punggol will serve the residents living at the north-eastern part of Singapore and is a welcoming addition to the sustainable “live-work-play” spaces in the transurban mixed-use community in Punggol. Punggol represents the new concept in housing for 21st century living. It is supported by an integrated transport network, clustered amenities, sustainable housing features, and scores of commercial, social, and recreational facilities, replete with a waterway running through. Kyoob-id’s Director, Michelle Goh, said: “The locale of the bowling centre provides much inspiration for the interior concept development. The history of the town and its vision as a waterfront city is studied and explored for the interior. We have also considered that the bowling centre is primarily a place of entertainment and thus should be portrayed as being lively, fun, and approachable.” Punggol was a fishing village and kampong for the early Malay and Chinese immigrants who settled there. Fishing, poultry farming, as well as fruit and vegetable planting were the main sources of income back then. The rivers that bounded the town provided the catch for fishermen who hawked them at the marketplace nearby. Today, the town is being developed as the future of housing with waterway features and sustainable concepts among other exciting features. Kyoob-id’s Senior Designer, Nut Ruangsorn, talks about the design execution: “Our plan is to retain a semblance of Punggol’s rich history and blend it with its dynamic vision of a waterfront city as seamlessly as possible. In addition, we want to bring the external environment such as natural foliage that exists outside the centre’s walls into the interior.”
The result is a modern interpretation of a waterfront city. References to the past such as fruit planting and meandering riverbeds are interpreted through modern perspectives, underscoring Punggol’s vision of a modern waterfront city in the making. A colour palette of orange – for its reference to Orchid Bowl’s corporate identity – as well as blue for its connotation of waters and riverbeds is chosen. The futuristic interior design is aesthetically refreshing as it is one of the first bowling centres in Singapore to have adopted this look. The innovative design is complemented with exciting new features such as the centre’s new bowling system from QubicaAMF, providing customers with a state-of-the-art and unique bowling experience; and thus meeting the intended objectives of Orchid Bowl for this bowling centre. Mr Benny Lee, Deputy General Manager for Orchid Bowl said: “The opening of our sixth Orchid Bowl outlet at SAFRA Punggol was aimed at catering to the changing needs of our consumers. With a new bowling system in place, we wanted to incorporate an innovative and futuristic design to complement it. Kyoob-id has been very helpful in understanding and achieving what we wanted. We are very pleased with the final look-and-feel that they have helped to apply to our SAFRA Punggol outlet.” At the entrance, a dynamic wall featuring intersecting polygons in various textures – wood, tinted mirror, and frosted back glass – greets customers. The polygons, derived from computer renderings, are modern illustrations of leaves, particularly those from fruit trees – a throwback to Punggol’s historical past. Inside, two towering tree displays with a modern twist are showcased right in front. Circular grooves that sinuate around the tree barks emit glowing blue LED light. These grooves are reminiscent of meandering riverbeds that bounded old Punggol back then as well as serve to portray the waterway features that are the highlights of the new town. On top, clusters of fabric acoustic panels are cut in polygonal shapes to emulate the leaves from the fruit tree, again giving reference to its rich origin. The flooring inside comprises a mixture of carpeting and vinyl anti-slip tiles that simulate the bends of a riverbed. The flooring layout mirrors that of the ceiling, giving a sense of consistency to the perspective. One of the new design features of the bowling centre has to be the flat ceiling of filing blue LED lights that parallel the ball return and gutter tracks on the bowling alley floor. Most if not all the bowling centres in Singapore are currently designed with staggered ceiling. The feature ceiling is the first of its kind implemented in bowling centres in Singapore. Said Nut, “The lighting is designed to light up the bowling lane subtly without causing distraction to the bowler. It is also dynamic and gives a futuristic tone to the centre.” The reception area is encased in a rotund setting with a round counter table, topped with a circular cap above. Composed of black galaxy solid surface material, the counter table sits on top of a bended wavy textured panel that hints of rivers and waters. Curvy seating follows the shapes of bowling balls and pins. Wall graphics show bowling balls and pins in a starry illustration. Customers can also expect cosmic lighting to be turned on during Fridays and Saturdays, adding on to the leisurely weekend mood. 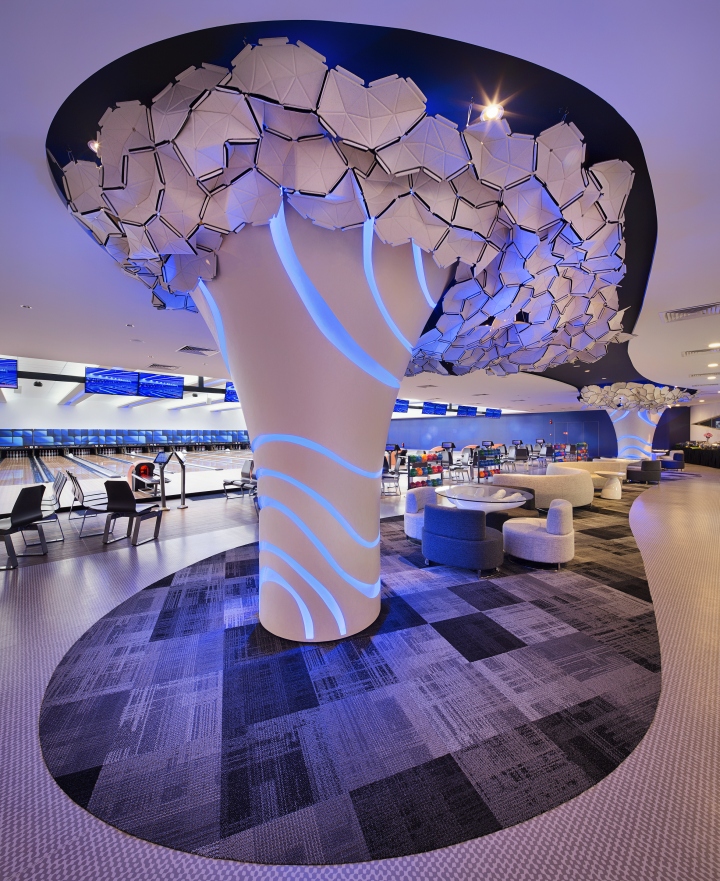 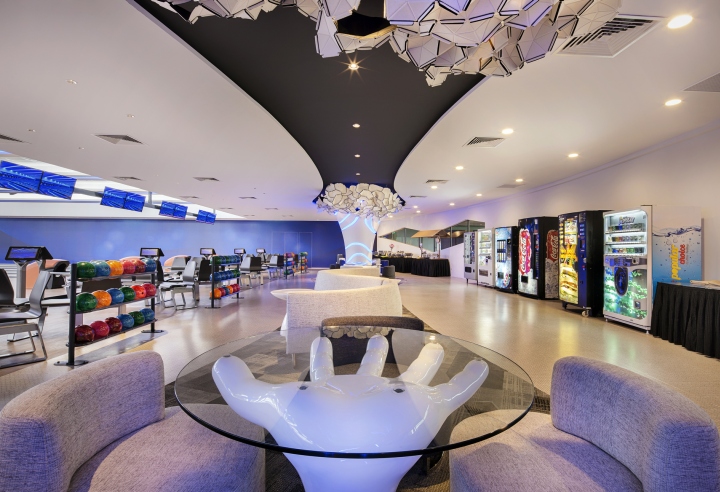 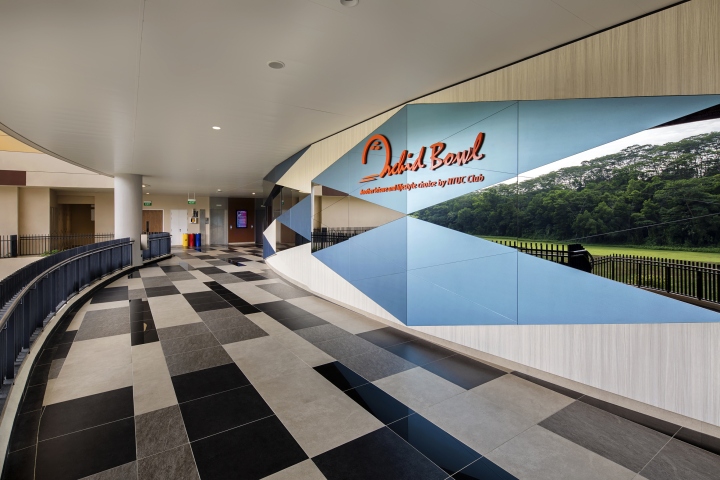 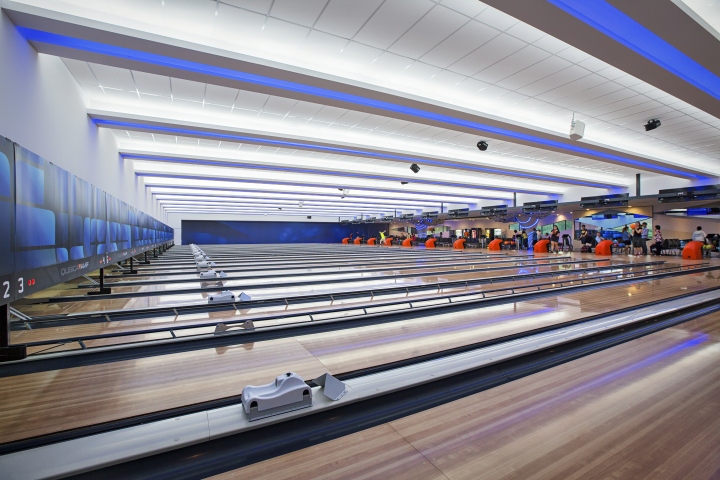 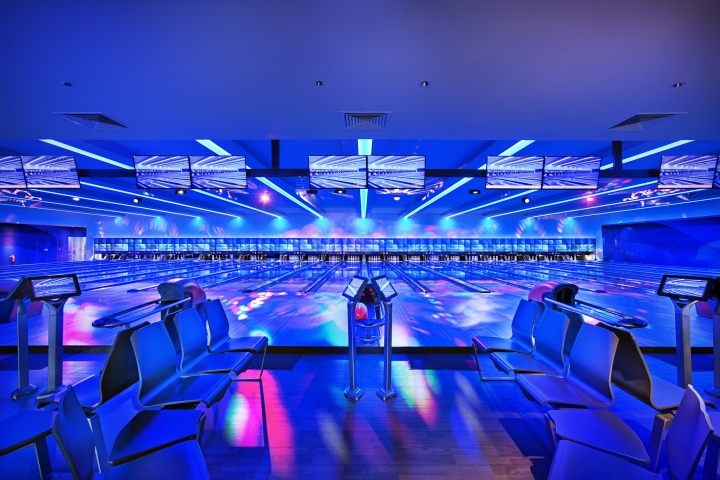 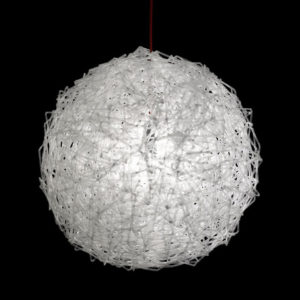 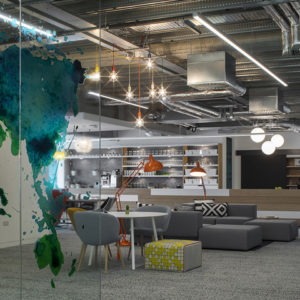 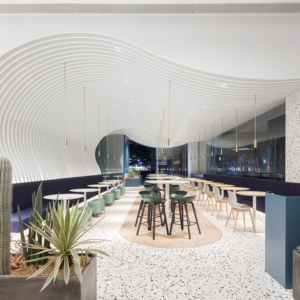 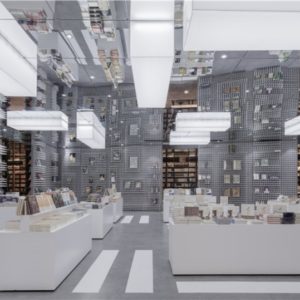