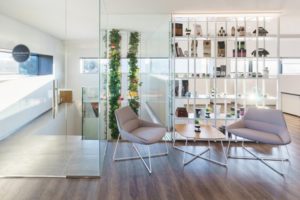 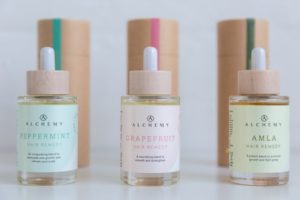 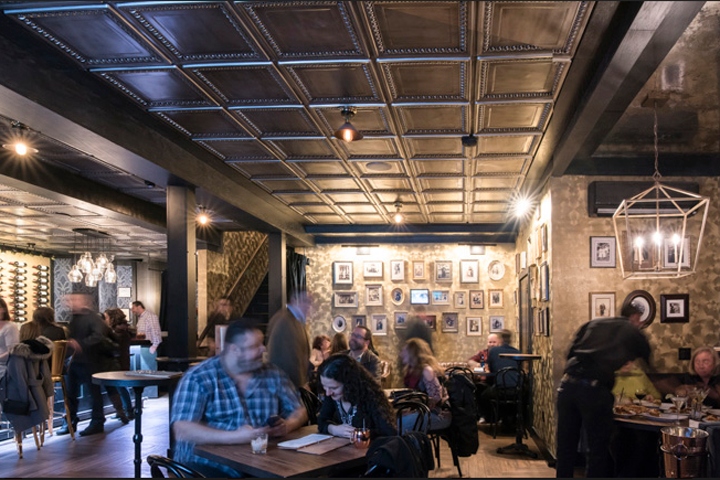 Charlotte’s Speakeasy is open on historic Main Street in Farmingdale with a location and design that combines the glamour and grit of a historic speakeasy. Since the opening of Charlotte’s Yogurt in 2014, owners John & Nick DeVito had big plans for their building’s basement—to revive the lower level to the speakeasy it had been during Prohibition. They hired designer Leah Plevrites of studioBIG who had also designed the yogurt shop. studioBIG designed the interiors, the brand, the signage, and the menus. The design of the speakeasy carries through the colors and character of the yogurt shop and the historic wood-frame building that houses both establishments. Upstairs, sunny yellows and blues convey charm and hospitality; downstairs, glamorous gold and rich navy act as their sultry, adult versions. Dark wood and painted tin ceilings add to the effect. To enter the speakeasy, guests enter the yogurt shop, locate a white bookcase at the end of the yogurt wall, and say the week’s password. A doorman pulls a bust statue to reveal the secret entrance. The first glimpse is a dramatic glass chandelier hung above the stairs, set against mirrored wallpaper and reclaimed 1920s tin ceiling tiles lining the staircase wall. Once downstairs, ceramic wood-look tiles laid in a herringbone pattern subtly lead patrons to the bar. Guest can pull up custom-upholstered metal high-back chairs to the bar, gather in luxurious banquettes or in lounge furniture, or sit at dining tables for food and drinks. Solid wood columns removed to open up the lower level space were reused as the top of the dramatic, under lit black bar and wall-mounted pedestal candleholders on the opposite booth wall. The lighting above the bar references vintage liquor bottles that could have been repurposed by a resourceful speakeasy owner. Custom antiqued mirrors above the left side of the bar visually expand the space. To the right, cork penny tile and fleur-de-list wallpaper serve as a backdrop to the wine wall. The fleur-de-lis pattern continues into the Charlotte’s Speakeasy logo, which was inspired by the pattern of original tin ceiling tiles salvaged on site. The leftover pieces of tin ceiling were reused as menu covers. Refined navy velvet drapery hung from the back wall adds softness, improves acoustics, and reveals a cinderblock wall behind that adds another reference to an ad-hoc speakeasy location. Additional references to the location’s storied history include vintage pictures of historic Farmingdale, the building, and the owners’ ancestors. The building previously housed a department store, and a sign found in the basement was reused and displayed proudly in the bar area. Three days during the week, the bar features 1920s themed live music. The basement’s wide exit stairs in the back—through which patrons in the 1920s may have escaped during police raids—features a catacomb-esque archway. Starting this spring, these stairs will lead to a new vestibule and large outdoor patio. 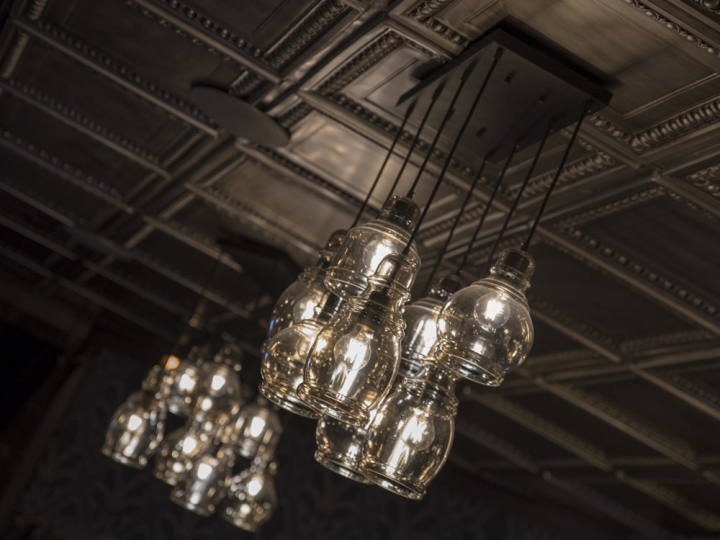 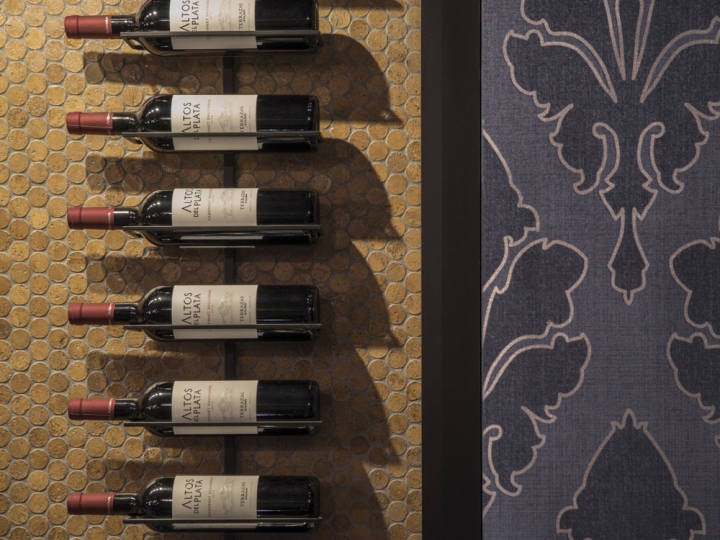 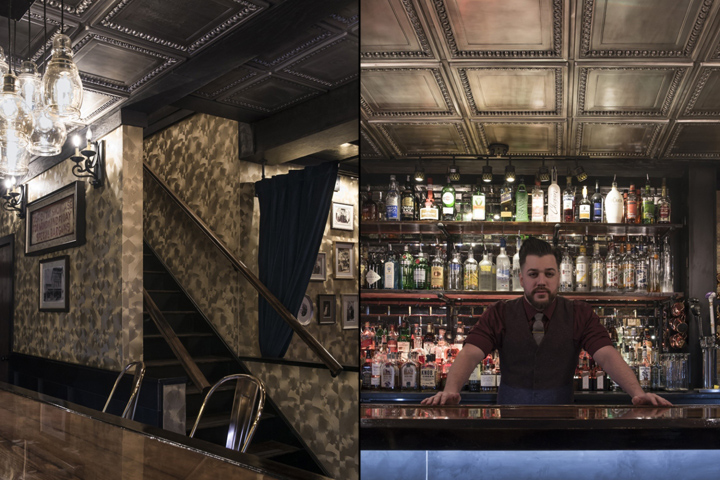 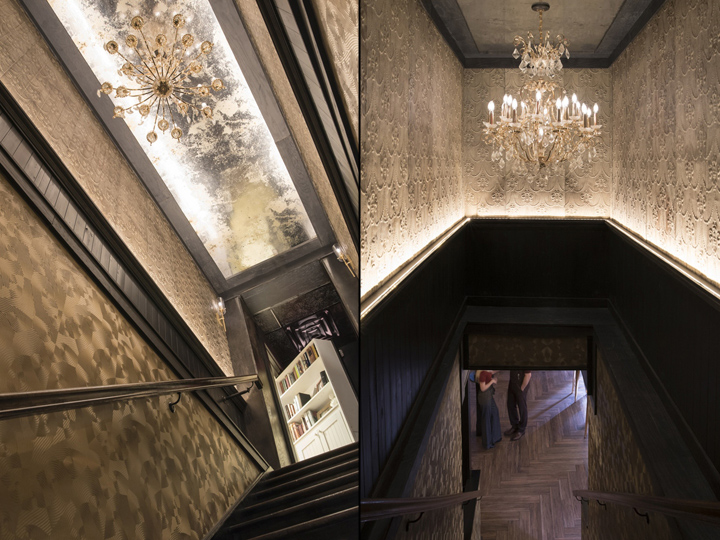 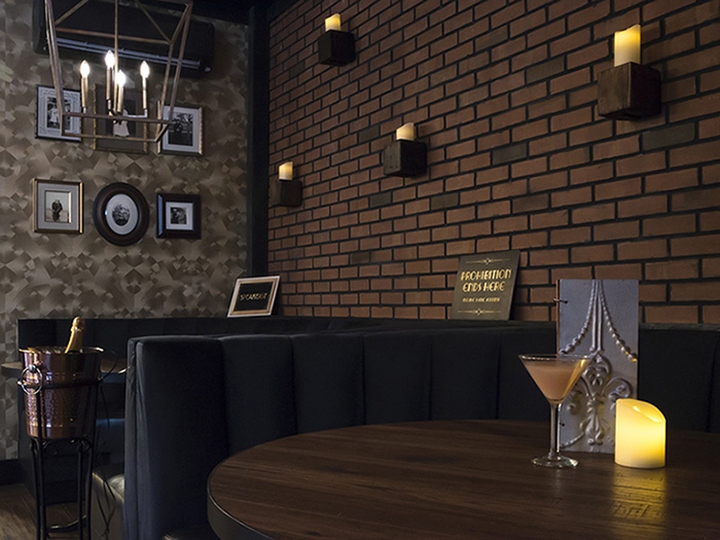 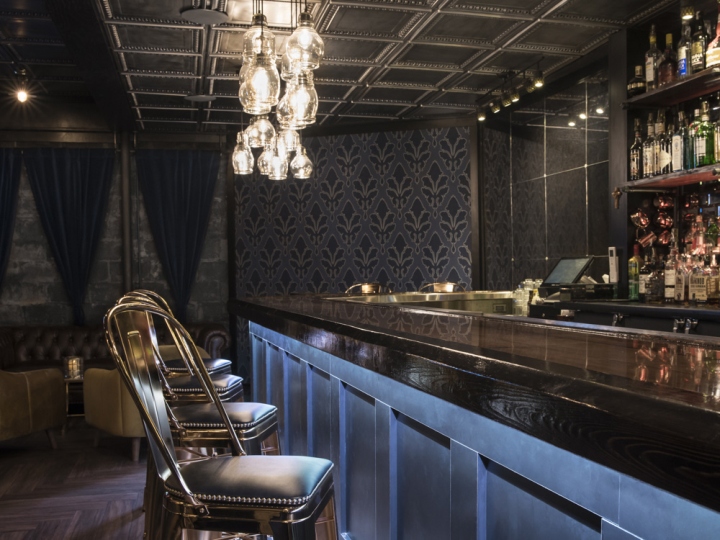 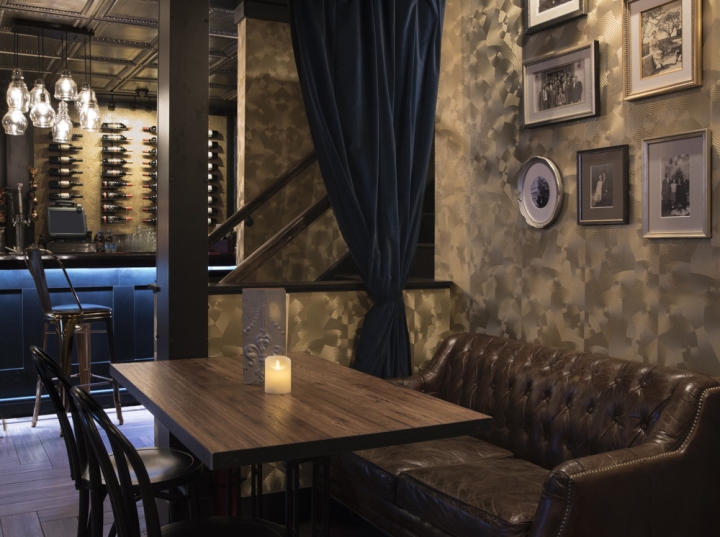 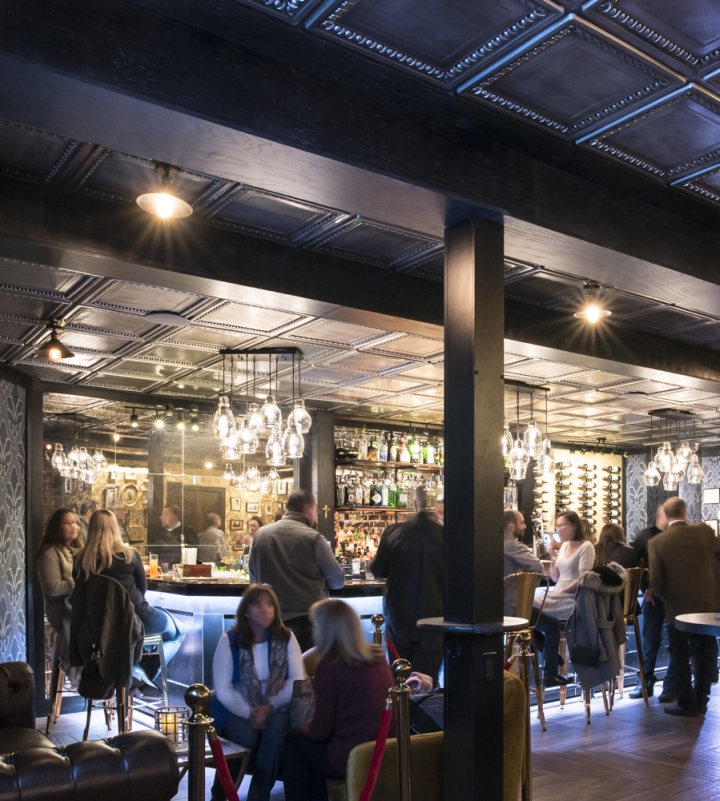 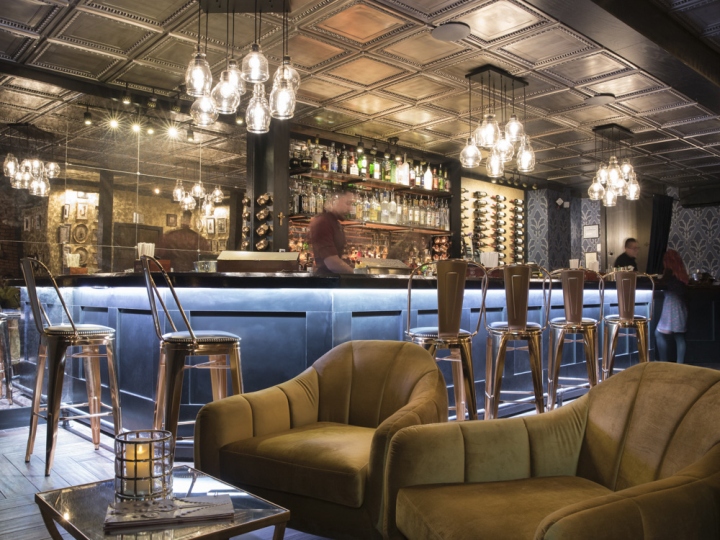 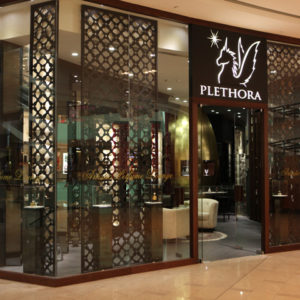 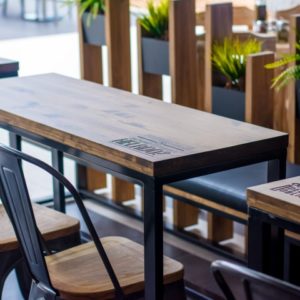 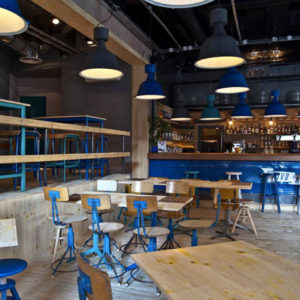 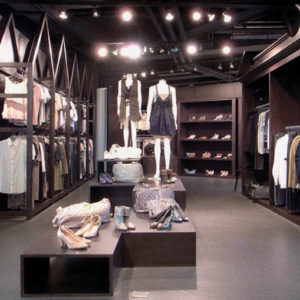